Periodontitis is a chronic inflammation of periodontal supporting tissue caused by local factors. Periodontal surgery can change the gene expression of peripheral blood mononuclear cells. However, little is known about the potential mechanism of surgical treatment for periodontitis.

To explore the potential molecular mechanism of surgical treatment for periodontitis.

First, based on the expression profiles of genes related to surgical treatment for periodontitis, a set of expression disorder modules related to surgical treatment for periodontitis were obtained by enrichment analysis. Subsequently, based on crosstalk analysis, we proved that there was a significant crosstalk relationship between module 3 and module 5. Finally, based on predictive analysis of multidimensional regulators, we identified a series of regulatory factors, such as endogenous genes, non-coding RNAs (ncRNAs), and transcription factors, which have potential regulatory effects on periodontitis.

A total of 337 genes related to surgical treatment for periodontitis were obtained, and 3896 genes related to periodontitis were amplified. Eight expression modules of periodontitis were obtained, involving the aggregation of 2672 gene modules. These modules are mainly involved in G-protein coupled receptor signaling pathway, coupled to cyclic nucleotide second messenger, and adenylate cyclase-modulating G-protein coupled receptor signaling pathway. In addition, eight endogenous genes (including EGF, RPS27A, and GNB3) were screened by network connectivity analysis. Finally, based on this set of potential dysfunction modules, 94 transcription factors (including NFKB1, SP1, and STAT3) and 1198 ncRNAs (including MALAT1, CRNDE, and ANCR) were revealed. These core regulators are thought to be involved in the potential molecular mechanism of periodontitis after surgical treatment.

Based on the results of this study, we can show biologists and pharmacists a new idea to reveal the potential molecular mechanism of surgical treatment for periodontitis, and provide valuable reference for follow-up treatment programs.

Core tip: Based on the expression pattern and function of genes in peripheral blood mononuclear cells of periodontitis patients, key genes (including EGF, RPS27A, GNB3, etc.) were identified. Further, transcription factors (including NFKB1, SP1, STAT3, etc.,) and non-coding RNAs (including MALAT1, CRNDE, and ANCR) that significantly regulated gene co-expression modules were identified. Exploring the relationships between genes and regulators may reveal the potential molecular mechanism of surgical treatment for periodontitis.

Periodontitis is a highly prevalent inflammatory disease in dental support tissues. It is caused by the growth of bacteria in the biofilm on the surface of teeth. As a mature periodontitis disease, it is characterized by progressive destruction of the supporting tissues of teeth. Periodontitis is a multifactorial disease. The susceptibility and severity of periodontitis are influenced by the polymorphism of immune response related genes, and are also determined by environmental and genetic factors[1,2]. Relevant studies have shown that periodontal diseases are associated with various systemic diseases, including cardiovascular diseases such as stroke and athero-sclerosis[3,4]. Many data show that periodontitis affects 20% of the world's population. The prevalence of periodontitis in adults is 35%, and it increases with age, reaches a peak in the 45-50 age group[5-7]. Periodontitis has a variety of risk factors, which may cause plaque, dental calculi, diabetes, and other diseases, and has multiple negative impacts on the quality of life of patients[5,8]. Therefore, many scholars actively explore the pathogenesis of periodontitis. It is well known that bacterial infection is the main cause of periodontal disease, and the bacterial colonization of actinomycetes and Porphyromonas gingivalis is the main cause of periodontitis[9,10]. On the one hand, the change of immune response in diabetic patients may cause periodontitis[11]. On the other hand, the severity of periodontal disease may also be related to the expression of multiple metalloproteinase genes in the oral mucosal epithelium[12]. Recent studies have shown that periodontitis, a chronic inflammatory oral infection, may have a profound impact on human health[13]. As far as the potential relationship between periodontitis and systemic diseases is concerned, the changes of immune cell function induced by periodontitis may cause lipid metabolism disorder through the me-chanism related to inflammatory cytokines, which has a serious negative impact on the health of whole body cells[13].

After understanding some of the pathogenesis of periodontitis, scholars around the world are actively studying the corresponding treatment mechanisms and inhibition methods. For example, according to van Winkelhoff et al[14], mechanical periodontal therapy combined with metronidazole and amoxicillin is effective for subgingival inhibition of actinomycete infection in patients with severe periodontitis. In addition, triclosan and copolymer toothpaste were found to be able to effectively control the development of plaque and gingivitis, thereby inhibiting the occurrence of periodontitis[15]. Relevant studies have shown that periodontitis is essentially an inflammatory reaction in periodontal attachment caused by bacteria[16]. Periodontal infection is not only related to chronic inflammation, but also to oxidative stress in severe periodontitis and its treatment[17]. YKL-40, as a chitin-binding glycoprotein, may be an inflammatory marker of periodontitis, which has been confirmed by Kido et al[18]. On the one hand, as one of the biomarkers of periodontitis, pulp-like cell-1 may play an important role in the association between periodontal infection and systemic inflammatory response[19]. On the other hand, the increased inflammatory response of higher serum C-reactive protein level may be as important as the promotion of periodontitis[20].

Analysis of crosstalk and internal driving force among modules

Because the regulatory mechanism of periodontitis-related genes and the synergistic relationship between genes are not clear, we conducted in-depth research. First, a total of 337 genes related to surgical treatment of periodontitis was integrated into several databases. Second, we amplified 337 related genes and got 3896 related genes. We analyzed the WGCNA co-expression of the amplified genes and observed the expression of these genes in 15 patients with periodontitis. We found that eight groups of genes expressed synergistically in the group based on cohesion. Finally, these eight groups of genes were identified as eight functional modules, involving 2672 clusters of module genes (Figure 1). These functional modules may participate in different functions and pathways, representing different regulatory mechanisms to mediate the occurrence and development of periodontitis.

Figure 1 Clustering module for synergistic expression of genes related to periodontitis. A: According to the co-expression relationship of differentially expressed genes, eight modules are clustered, and one color represents one module; B: Thermogram of modular gene expression in samples. Genes associated with periodontitis are expressed in groups intuitively in disease samples.
Interaction between dysfunctional modules 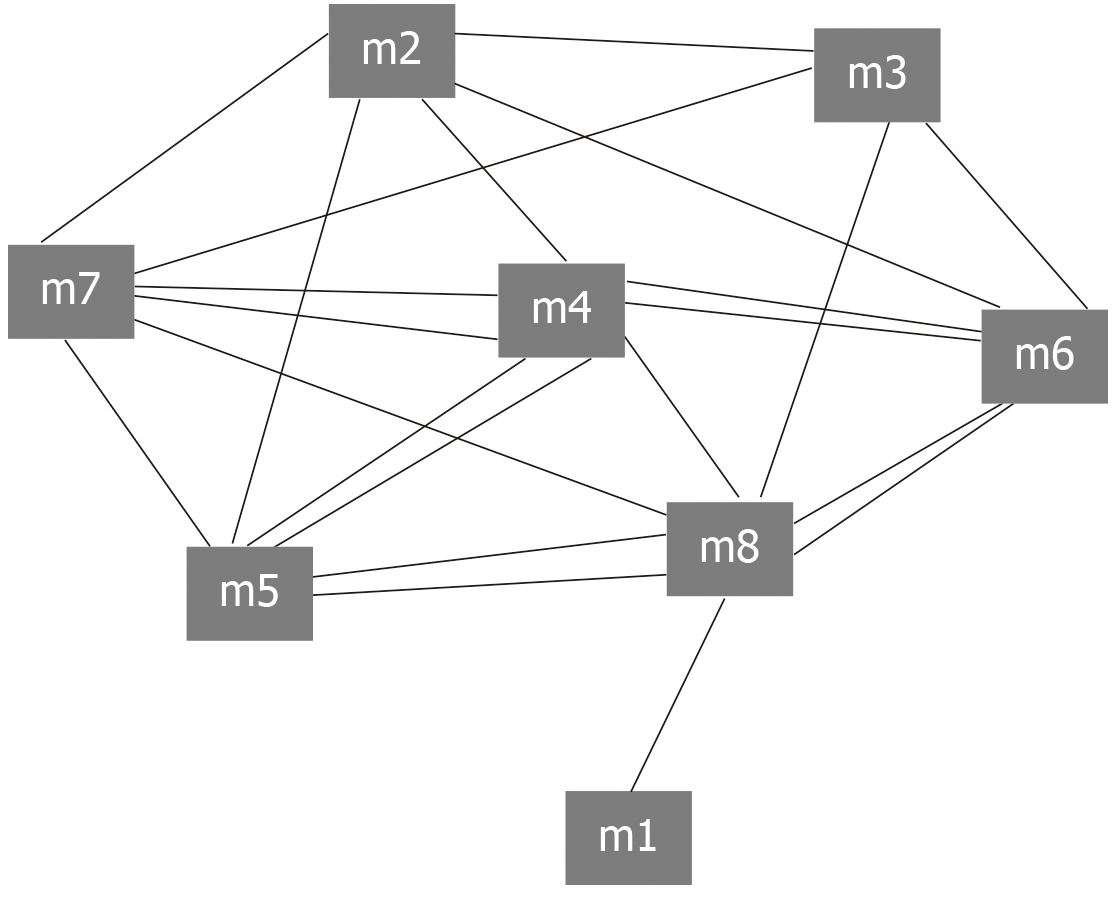 Studying the function and pathway of gene involvement is an important means to identify its mediated pathogenesis. In order to study the possible dysfunction caused by module gene disorder, we analyzed the enrichment of function and pathway of each module. The results showed that most of the functional modules were enriched in periodontitis-related functions and pathways. GO function and KEGG pathway enrichment analyses were carried out on the eight functional modules. A total of 45887 functions and 1796 KEGG pathway enrichment results were obtained. Among them, there are 5950 molecular functions, 3976 cell components, and 35691 biological processes in which these genes participate (Figure 3, Table 1). It is worth noting that G-protein coupled receptor signaling pathway, coupled to cyclic nucleotide second messenger, and adenylate cyclase-modulating G-protein coupled receptor signaling pathway, which are significantly involved, may be identified as the core signaling pathways involved in the potential disorder mechanism of periodontitis. From the above data, we can find that these signaling pathways may be closely related to the molecular mechanism of periodontitis in the surgical treatment of peripheral blood monocytes.

It is well known that periodontitis is a multifactorial disease. Studies have shown that some clinical variability of periodontitis may be caused by genetic factors[28]. As a high-risk inflammatory disease, periodontitis is considered a potential risk factor for systemic diseases such as cardiovascular diseases[20]. Therefore, scholars around the world are actively exploring the detailed and specific pathogenesis and treatment mechanism of periodontitis. In this study, we investigated the gene expression patterns and functional pathways of peripheral blood mononuclear cells to reveal the potential molecular mechanism of the effect of surgical treatment on periodontitis. We proposed a comprehensive approach, which first integrated 3896 genes related to periodontitis and carried out co-expression analysis. Finally, eight functional modules with synergistic expression were identified, involving 2672 module gene clusters. Based on the results of functional enrichment, we also obtained that these modules are significantly involved in G-protein coupled receptor signaling pathway, coupled to cyclic nucleotide second messenger, and adenylate cyclase-modulating G-protein coupled receptor signaling pathway. Among them, adenylate cyclase has been found to be significantly involved in many signaling pathways, which also indicates that adenylate cyclase plays an important role in the signaling pathway in periodontitis. According to the research of Petrovich et al[29], the decrease of adenylate cyclase activity increases with the severity of periodontal pathological process, so it may play an important role in the pathogenesis of periodontitis. In addition, we also found that fibroblasts are also an important functional pathway involved in periodontitis, which is involved in the derivation of osteoclasts, contributing to the loss of attachment and destruction of periodontal ligaments and leading to periodontitis[30].

In addition, ncRNAs have been considered as important regulators of disease occurrence and development. We conducted pivot analysis based on the targeting relationship between ncRNAs and genes. The prediction results showed that there were 1198 ncRNAs that had significant regulatory effects on modules, including 1678 ncRNA-module interaction pairs. Statistical analysis of the results showed that MALAT1 had a significant regulatory relationship with six dysfunction modules, which were considered as key regulators of periodontitis. According to Ziebolz et al[33], MALAT1 can participate in the pathogenesis of periodontitis through a variety of pathways, including cytokine-cytokine receptor, adhesion molecule, and chemokine signal transduction pathway[2]. In addition, ANCR has been found to play an im-portant role in regulating the osteogenic differentiation of periodontitis. In that study, ANCR has been found to regulate two functional modules[33]. At the same time, we screened a series of genes with the greatest connectivity, which were considered as the core driving molecules and identified as intrinsic genes. In total, there were eight endogenous genes, which may represent the potential key disorders in periodontitis treated by surgery. Analysis of these eight endogenous genes showed that EGF is an inhibitory factor for cell apoptosis[34]. According to the research results of many scholars, it can be shown that EGF has the effect of bone catabolism, which may stimulate osteoclast formation and tooth movement, and has a certain regulatory effect on the occurrence and development of periodontitis[35].

Periodontal diseases are associated with various systemic diseases, including cardiovascular diseases such as stroke and atherosclerosis, which seriously affect the quality of life for patients.

At present, little is known about the potential mechanism of surgical treatment for periodontitis.

To explore the mechanism of surgical treatment for periodontitis based on the gene expression of peripheral blood mononuclear cells.

The results of this study provide a new theoretical basis and individualized treatment direction for follow-up treatment.