Rosai–Dorfman disease (RDD) is a rare histiocytic proliferation of unknown etiology commonly found in children and adolescents. The common manifestation of RDD is massive and painless bilateral cervical lymphadenopathy with extranodal disease. While extranodal involvement in RDD is common, the spleen is an infrequent site of disease.

We report a 10-mo-old female infant with RDD presenting multiple splenic masses without cervical lymphadenopathy. She had fever, and blood tests showed leukocytosis, anemia, and elevated erythrocyte sedimentation rate and C-reactive protein. Ultrasound, computed tomography, and magnetic resonance images demonstrated multiple splenic masses. Despite antibiotic therapy, her symptoms were not relived. She underwent diagnostic splenectomy and was discharged with recovery.

In pediatric patients with refractory infectious symptoms or hematological abnormalities, clinicians should suspect RDD, even in patients without significant lymphadenopathy.

Core Tip: Rosai–Dorfman disease (RDD) is a rare histiocytic proliferation of unknown etiology, characterized by massive and painless bilateral cervical lymphadenopathy accompanied by fever, commonly found in children and adolescents. The spleen is an infrequent site of extranodal involvement in RDD. We report a 10-mo-old girl with RDD with extranodal involvement of the spleen without significant cervical lymphadenopathy.

Rosai–Dorfman disease (RDD), also called sinus histiocytosis with massive lymphadenopathy, is a rare histiocytic proliferation of unknown etiology, usually occurring in children and adolescents. It is characterized by massive and painless bilateral cervical lymphadenopathy accompanied by fever, leukocytosis, elevated erythrocyte sedimentation rate, and polyclonal hypergammaglobulinemia[1]. More than 40% of patients have an extranodal involvement, and commonly affected sites are the upper respiratory system, skin, eyes, bones, genitourinary system, oral cavity, central nervous system, and soft tissue[2,3]. The spleen is an infrequent site of disease, and if involved, combined nodal and extranodal disease is more frequent. Here we report a case of a 10-mo-old female infant with RDD with extranodal involvement of the spleen and provide a review of the available literature on extranodal RDD involvement in pediatric patients.

A 10-mo-old female infant visited our hospital due to fever.

The patient had persistent fever during the previous 10 d. Her body temperature was elevated to 39 ℃. The patient did not have any respiratory or gastrointestinal symptoms, except for mild rhinorrhea.

No notable family history was found.

On plain radiography, an approximately 4-cm mass was observed in the left upper quadrant of the abdomen with displacement of the bowel loops. Ultrasonography showed two hypoechoic solid masses in the spleen with diameters between 1 cm and 1.5 cm. The lower pole of the spleen was enlarged, forming a 4.5-cm solid lump, which contained irregular and well-defined hypoechoic areas with intervening normal spleen tissue. The lesions did not show cystic portions or necrotic changes, but showed similar vascularity to the spleen on both color Doppler study and superb microvascular imaging and showed comparable shear wave velocity to a normal area of the spleen with a median value of 21.5 kPa on elastography, which was repeatedly measured 10 times (21.5 kPa for the lesion vs. 24.7 kPa for the normal spleen) (Figure 1). 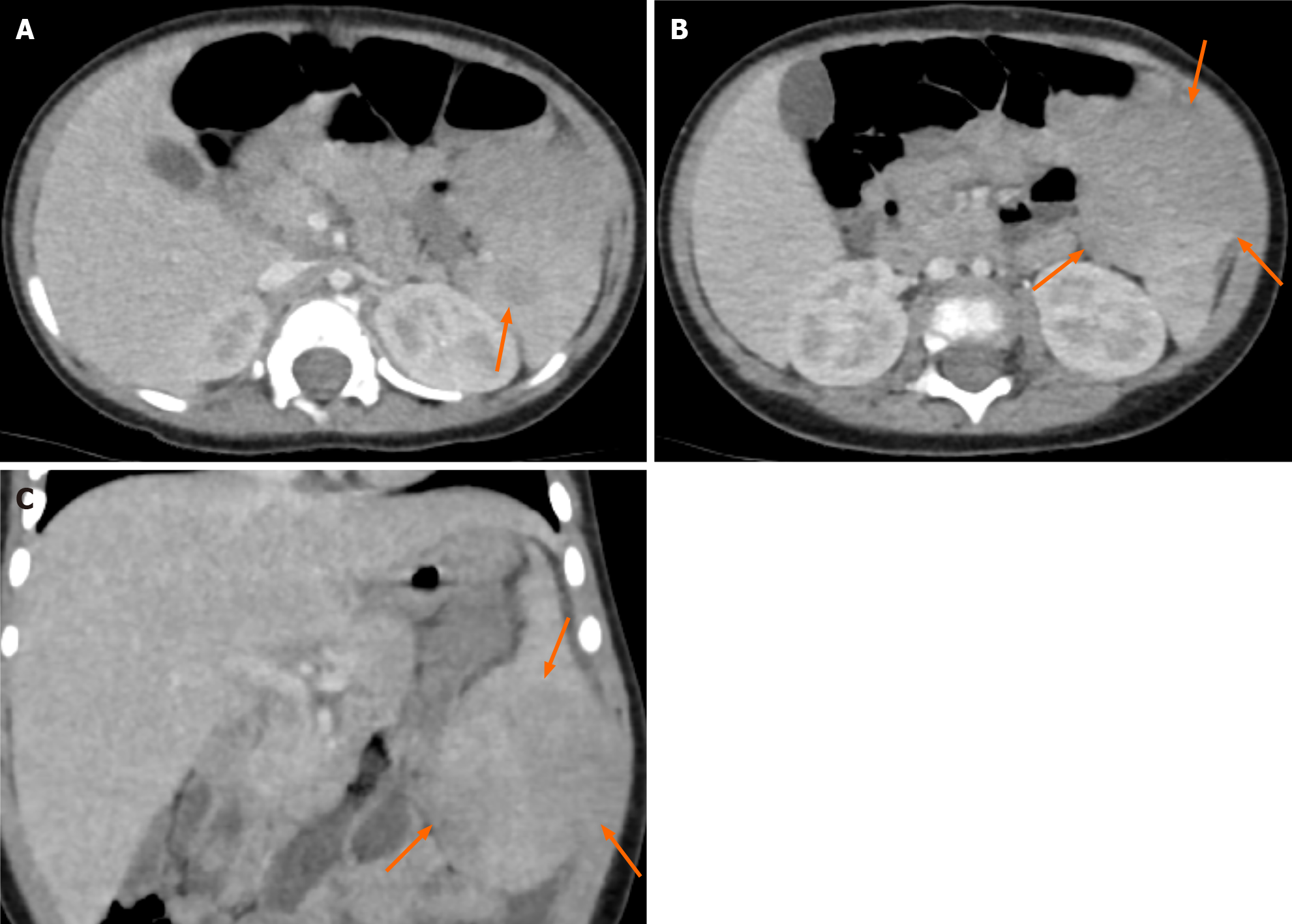 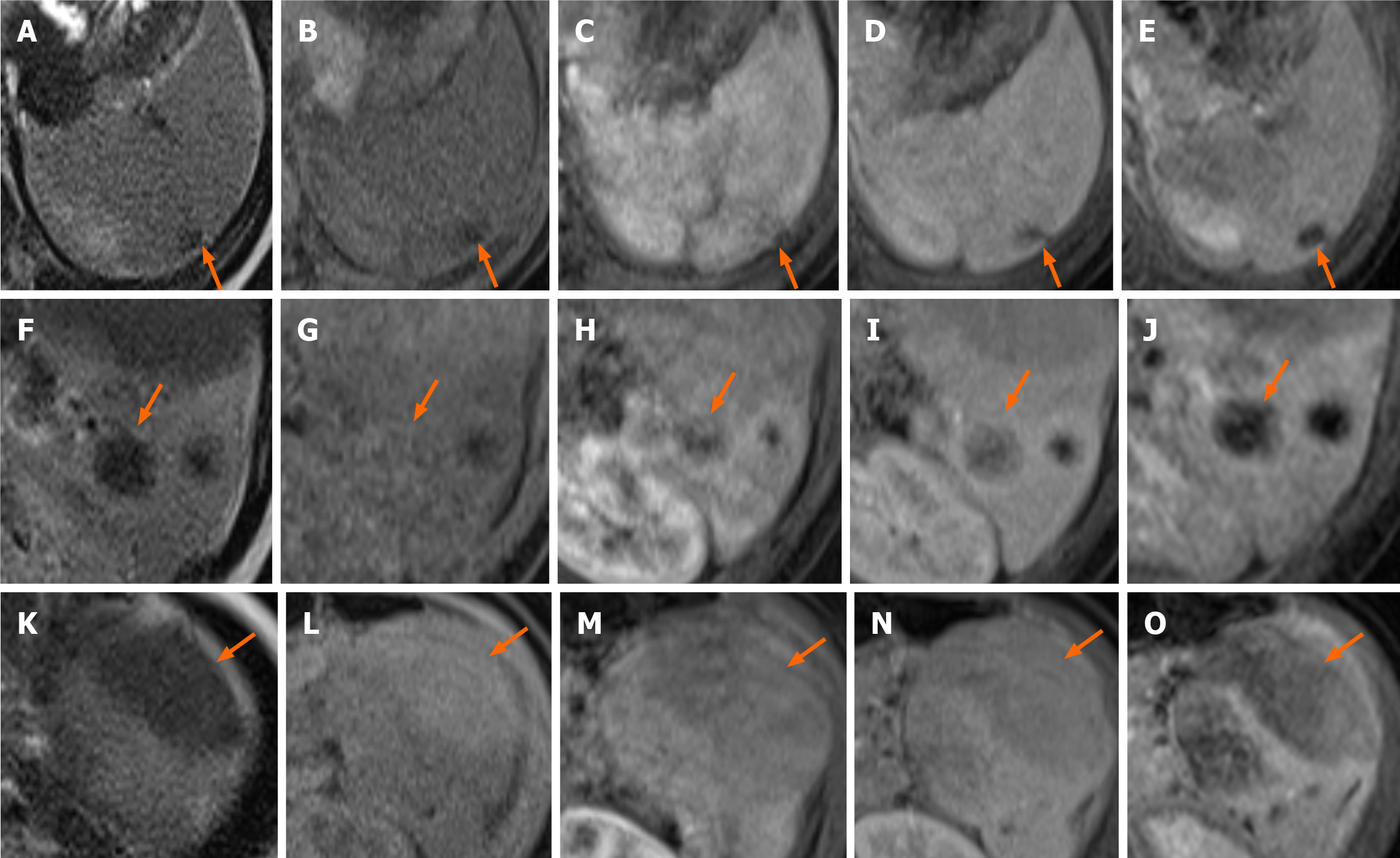 Histopathology showed histiocytic proliferation with emperipolesis in an ill-defined ovoid splenic mass and splenic hilar lymph nodes. Immunohistochemistry revealed that the proliferating histiocytes were positive for CD68 antigen and S-100 protein, but negative for CD1a (Figure 4). These findings were consistent with RDD. Epstein–Barr virus (EBV) was not detected in the specimen using EBV in situ hybridization for EBV-encoded RNA. 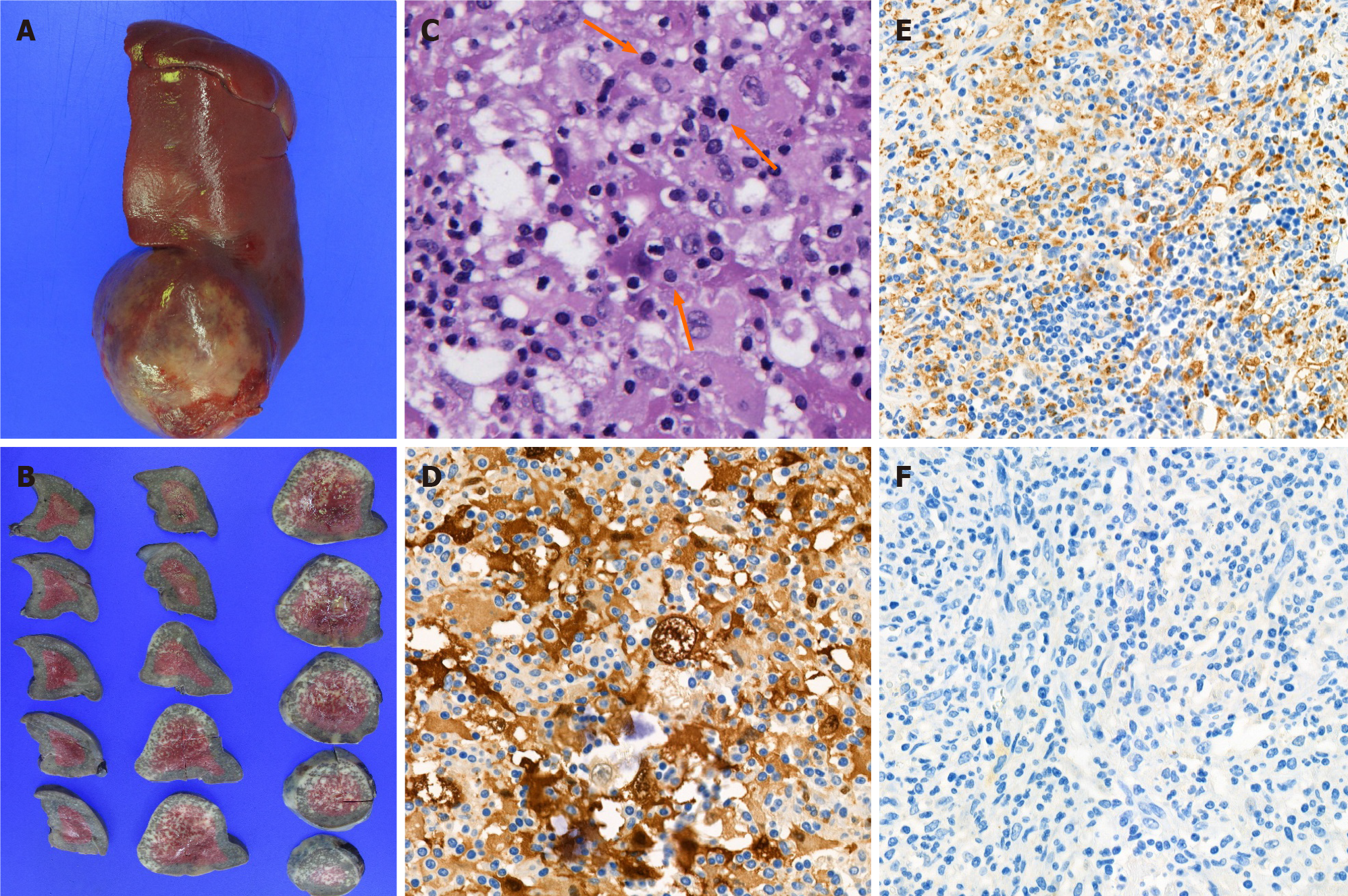 The patient was diagnosed with extranodal involvement of RDD in the spleen.

Although 1 mg of piperacillin-tazobactam were administered three times daily for five days, the patient had persistent fever and anemia. Considering laboratory and radiological findings, diagnostic splenectomy was performed. Following a laparotomy, a slightly hard and round-shaped exophytic mass approximately 6 cm in size was found at the inferior pole of the spleen, and a few enlarged lymph nodes around the splenic hilum and pancreas tail and along the gastroepiploic vessels were found. After splenectomy, one accessory spleen and a few enlarged lymph nodes along the gastoepiploic vessels were found and retrieved.

The patient’s symptoms, including fever, anemia, and leukocytosis, improved after splenectomy. The patient was discharged 14 d after the operation. At one month follow-up, the patient had no fever or other discomfort. The lab findings including leukocyte count, hemoglobin, ESR and CRP were within normal limit. The patient underwent contrast-enhanced CT exams one month, six months, and two year surgery. Those examinations demonstrated no abnormal finding except splenectomy state.

Histiocytoses are a group of hematological disorders characterized by pathological mononuclear phagocytic cell infiltration of normal tissues. Mononuclear phagocytes can be classified into two major classes: macrophages and dendritic cells. The World Health Organization has classified histiocytic disorders into three classes based on pathological cells: dendritic cell histiocytoses, non-dendritic cell histiocytoses, and malignant histiocytoses[4]. RDD, originally named sinus histiocytosis with massive lymphadenopathy, is a rare histiocytic disorder, but is the most common non-dendritic cell histiocytosis[5]. RDD was initially described by Rosai and Dorfman in 1969; however, its exact etiology and pathogenesis remained unknown. Some studies have proposed that RDD is a type of chronic inflammatory lymphoid hyperplasia due to antigenic stimuli, such as malignant tumors and acute lymphadenitis disorder[6,7]. Lu et al[8] have reported four cases in which RDD and malignant lymphoma were confirmed in the same lymph node. di Dio et al[9] have reported one case in which RDD and EBV infection were diagnosed in the same biopsied cervical lymph node specimen. In addition, Arakaki et al[5] have reported human herpesvirus 6 detection in a biopsied RDD renal sample. However, here, the patient had no simultaneous hematological disorder or definite infection.

RDD affects males more frequently than females[10] and commonly occurs in the first two decades of life[11]. The most commonly affected site is the lymph nodes, and the most common clinical symptom is painless and isolated lymphadenopathy[12]. Over 90% of patients with RDD present with cervical lymphadenopathy, but any group of lymph nodes can be invaded. Axillary, inguinal, mediastinal, hilar, and retroperitoneal lymph node involvements have been reported[9,10]. Extranodal involvement of RDD has been reported in up to 40% of all cases[2]; however, few cases are available in the literature. The most commonly affected extranodal sites are the skin and soft tissue. The involvement of the upper respiratory tract, eyes, salivary gland, central nervous system, bones, lungs, urogenital and gastrointestinal tracts, breast, thyroid, and heart has also been described[9,11-16]. Concurrent involvement of nodal and extranodal sites is more commonly observed. According to some studies, no correlation was observed between the type of RDD and clinical outcomes, but a significant difference was observed between the mean age of children and the type of RDD, with younger children more frequently affected by purely nodal RDD[9,17]. We summarized further case reports of RDD in pediatric patients in Table 1[4,5,7,9,12,14-16,18].

Imaging examinations are not pathognomonic in the diagnosis of RDD because of their nonspecific findings. Furthermore, the appearance of extranodal RDD on imaging studies often mimics malignancy[12]. Therefore, biopsy is necessary to establish diagnosis[12,18]. In our case, CT images showed multiple hypodense masses in the spleen in accordance with other studies[19,20].

The definitive diagnosis of RDD can only be made by histological analysis. One of the pathognomonic findings is emperipolesis defined as the presence of phagocytized cells in a histiocyte. In immunohistochemical analysis, positivity for CD68 antigen and S-100 protein, but negativity for CD1a antigen is diagnostic for RDD. Emperipolesis can also be found in Langerhans cell histiocytosis (LCH), but the absence of Birbeck granules and negativity for CD1a antigen help differentiate RDD from LCH[9,12].

The clinical course of RDD is benign and may regress spontaneously. Given that fact, observation may be a good treatment option. However, treatment is required in cases of significant extranodal disease because locoregional recurrence or even dissemination can be possible. Compression of vital organs or severe constitutional symptoms, such as fever, is also indications for therapy[7,9]. Although there is no consensus for the optimum treatment option, surgery is probably the best curative treatment if complete resection is possible. In addition, medical therapy, including corticosteroids, antibiotics, antiviral agents, chemotherapy, and radiotherapy, is available[9].

In conclusion, although splenic involvement is rare, especially in pediatric patients with RDD, RDD should be considered a differential diagnosis, even in patients without significant lymphadenopathy, especially in the setting of hematological abnormality or infectious symptoms.