AIM: To evaluate the effects of different types of dietary fats on the hepatic lipid content and oxidative stress parameters in rat liver with experimental non-alcoholic fatty liver disease (NAFLD).

CONCLUSION: Olive oil decreases the accumulation of triglyceride in the liver of rats with NAFLD, but does not provide the greatest antioxidant activity.

Non-alcoholic steatohepatitis (NASH) pathogenesis includes insulin resistance, increased exposure of the hepatocytes to TNF-α and increased oxidative stress[1]. The development of hepatic steatosis results from an imbalance in the rate of entry, synthesis, or clearance of fat from the liver. More specifically, the increased influx of free fatty acids to the liver, reduced free fatty acid β-oxidation, a reduced hepatic secretion of triglyceride-rich lipoproteins and increased lipid peroxidation may be altered[1].

Hepatic triglycerides are derived from different sources. First, from endogenous fatty acids which are synthesized in the liver. Second, from dietary triglycerides that enter the liver via the chylomicron remnant pathway and finally from free fatty acids that are released from adipose tissues during periods of fasting. An impaired postprandial triglyceride response has been reported in patients with NASH[2]. This may promote fatty liver in several ways, such as increasing hepatic uptake of triglyceride-rich lipoproteins and their remnants in the postprandial period[2,3]. The contribution of hepatic lipogenesis to triglyceride secretion was 3 times higher in the patients as compared with the controls while that of non-esterified fatty acids (NEFA) re-esterification was reduced by 52%. Thus, enhanced lipogenesis appears as a prominent abnormality of hepatic fatty metabolism in the subjects with NASH[4].

Several studies have emphasized the importance of dietary composition in the treatment of fatty liver. However, the optimal diet for prevention of NASH is unknown. NASH patients had significantly higher overnight fasting blood concentration of total and free fatty acids than controls, and higher total saturated and monounsaturated levels of lipid fractions, mainly due to increase of palmitate, palmitoleate and oleate acids[5,6]. Low-calorie diet for 2 wk in Sprague-Dawley rats exerted no significant effects on either serum lipid disorders or hepatic inflammatory changes[7]. Dietary omega-3 and omega-6 polyunsaturated fatty acids (PUFA), present in fish oil, can regulate hepatic lipogenesis by reducing sterol-regulatory element-binding protein-1 in the liver[8]. Moreover, PUFA administration decreased fatty acids, such as oleate (C18:1 n-9), palmitate (C16:0) and palmitoleate (C16:1 n-7)[9]. Diet of NASH patients who were free of hyperlipidemia, diabetes and obesity was richer in saturated fat and poorer in PUFA[10]. PUFA may act as “fuel partitioners”, directing fatty acids away from triglyceride storage and toward oxidation[11]. A recent clinical study that compared 19 patients who had non-alcoholic fatty liver disease (NAFLD) with 11 normal control subjects revealed that patients with NAFLD had a higher ratio of long-chain polyunsaturated fatty acids omega-6/omega-3 in their livers than did control subjects[6]. When dietary monounsaturated fatty acids, mainly oleic acid present in olive oil, replace high-carbohydrate diets, plasma triglycerides concentration decrease, both in patients without diabetes and in those with type 2 diabetes[12]. These findings provide the rational for undertaking the experiment to test the hypothesis that supplementation of different oils to methionine choline-deficient diet could attenuate fatty liver changes in a novel model of hepatic steatosis.

MATERIALS AND METHODS
Animals and protocol

Methionine choline-deficient diet (MCDD) is the most widely used model for NASH in rats[13]. The development of steatosis is caused by impaired very low-density lipoprotein (VLDL) secretion. Unlike animals fed a choline-sufficient diet which developed only steatosis but not inflammation and fibrosis, animals fed an MCDD diet showed fibrosing steatohepatitis[13]. Thirty-two Sprague-Dawley rats were randomly divided into five groups. The animals in the control group (n = 8) were on chow diet (Group 1). In group 2, there were six rats on methionine choline-deficient diet (MCDD). In group 3, there were six rats on MCDD supplemented with olive oil (0.45 mg/g rat weight). In group 4, six rats were on MCDD with fish oil (0.45 mg/g rat weight) and in group 5, 6 rats were on MCDD with butter-fat (0.45 mg/g rat weight). In all treatment groups, the MCDD diet was supplemented simply with the different oils and not as a semi-purified diet. The dietary fat was monitored daily and was supplied by the local pharmacy of the Sieff Hospital, Safed, Israel, and not by commercial sources. After two months, the rats were generally anesthetized and blood was sampled by heart puncture. Rats were sacrificed and the liver sections were examined. All animals were treated humanely and in accordance with the guidelines of the institution. The composition of the experimental diets and the levels of lipid fractions are shown in Table 1.

Fatty acids composition: Rat liver cytosol was prepared by differential centrifugation. Approximately 0.5 g of the liver was homogenized in 5 mL of ice-cold 50 mmol/L phosphate buffer solution (pH 7.4). The liver homogenate was centrifuged for 10 min at 5000 r/min at 4°C, and the pellet was discarded. The supernatant was further centrifuged for 30 min at 8000 r/min at 4°C. Fatty acid methyl esters were analyzed by gas chromatography using palmitic acid as the marker of fatty acids[23].

The specimens were fixed in buffered formalin and embedded in paraffin. Hematoxylin and eosin (H&E) sections, periodic acid Schiff with diastase stain for inflammatory grading as well as Mason’s trichrome and reticulin stains were reviewed for fibrosis and architectural changes. The necroinflammatory grade and stage of fibrosis were assessed according the method of Brunt

et al[24]. Steatosis was graded by semi-quantitative analysis as follows: mild = 5%-30%; moderate = 30%-60%; and severe = more than 60% of hepatocytes affected. Each biopsy was analyzed and graded by the same pathologist who was blinded to the rats group. 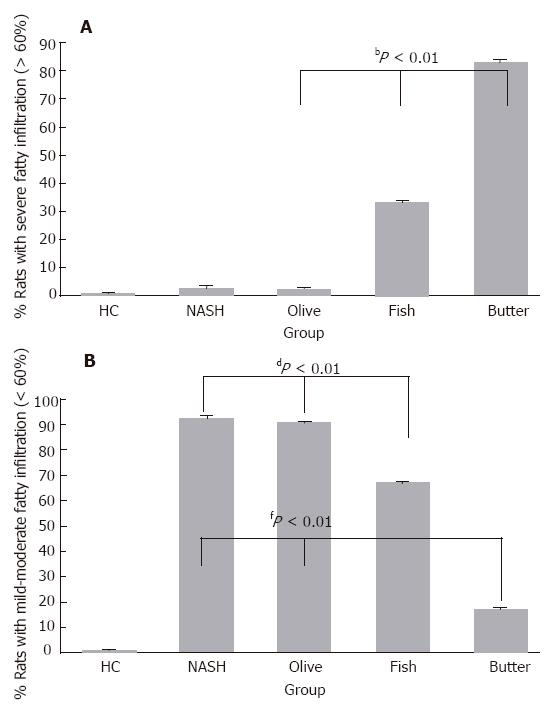 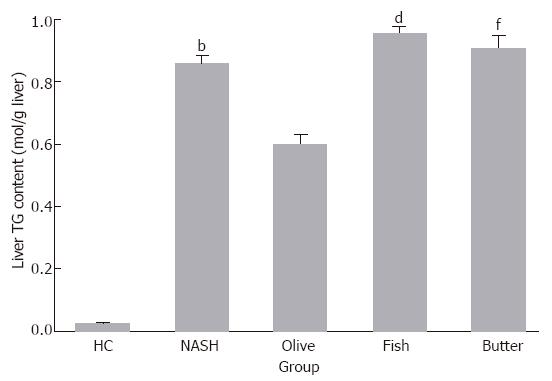 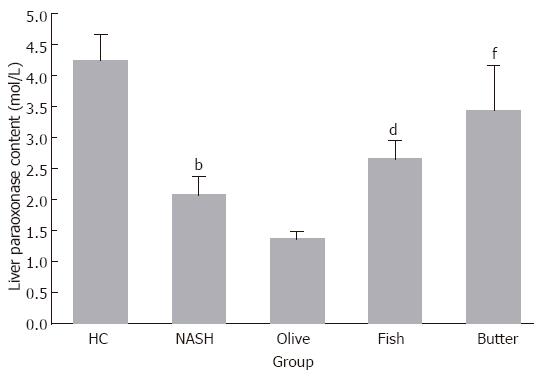 The results of this study clearly indicate that rats on MCDD diet supplemented with olive oil, but not fish oil or butter fat, store less triglycerides in their liver and prevent the occurrence of dietary-induced severe hepatic steatosis. Moreover, the results indicate also that olive oil diet provides the least antioxidant capability, whereas the fish oil and butter fat diets behave similarly with regard to antioxidant activities. As expected, these rats lost about 40% of body weight[25]. This weight loss is not in accordance with the clinical picture of NASH found in humans and may then results from the loss of subcutaneous fat[26]. Hepatic insulin resistance in the MCDD model of fatty liver is most likely caused by CYP2E1-induced oxidative stress and by elevated serum triglyceride levels[1]. In the current study, serum triglyceride levels were higher in all groups on MCDD (alone or enriched with fat) than in the control group, a finding which is also in accordance with the clinical NASH profile. Triglyceride content in the livers of the MCDD + olive oil group was lower than other groups on MCDD or MCDD enriched with saturated or polyunsaturated fatty acids. This may have been due to the inhibition of hepatic triacylglycerol synthesis[27], and stimulation of hepatic peroxisomal beta-oxidation produced by the olive oil diet[28]. Decrease in lipoprotein lipase and triacylglycerol lipase in the liver after olive and fish oil consumption has also been described and this may be an adaptive response to the low concentration of substrates (triacylglycerol) for these enzymes. The low levels of triglycerides in the liver after olive oil consumption may also be related to the reduced levels of plasma triglycerides found in our study. Moreover, monounsaturated fatty acids, present in olive oil, may improve insulin resistance, and enhance the release of triglyceride from the liver. This also decreases leak of free fatty acids from peripheral adipose tissue back to the liver and may explain the difference between the olive oil and butter groups.

The rates of oxidation for the same amount of fatty acids differed among healthy persons, e.g., more than 37% of the dose of lauric acid (12:0) was oxidized compared with less than 15% of the dose of stearic acid (18:0)[32]. In dietary fat-enriched diets, the increased free fatty acids influx into the hepatocytes exceeds the liver capacity to assemble or/and export triglyceride-rich VLDL particles, causing hepatic steatosis. This increases the substrate for lipid peroxidation in the liver[33-35]. Polyunsaturated fatty acids are prone to spontaneous peroxidation, thus forming lipid hydroperoxides and reactive aldehydes[33,34]. At the same time, free fatty acid content in the hepatocytes up-regulates PPAR-α. This enhances mitochondrial long-chain fatty acid β-oxidation, initiation of omega-oxidation of fatty acids in the microsomes[36,37] and peroxisomal β-oxidation[38] resulting in generation of reactive oxygen species accumulation[39]. MCDD diet increased oxidative stress in the liver, but not in the plasma. Fat enrichment with olive oil, fish oil or butter fat added more oxidative stress in the liver and in the plasma. This increased oxidative stress in the liver did not impoverish α-tocopherol hepatic content in the rat groups fed diets enriched with fish oil or with butter. This, presumably, is due to the high content of α-tocopherol in these two food resources. Hepatic paraoxonase activity decreased in all rat groups on MCDD. This decreased activity may be the result of hepatic injury secondary to fat accumulation and increased oxidative stress. Plasma paraoxonase 1 activity is decreased in chronic liver disease in correlation with the degree of hepatic dysfunction[40]. Paraoxonase gene expression has been observed only in the liver[41]. This decrease in paraoxonase activity was more pronounced in the rats fed MCDD enriched with olive oil. The oxidative stress in the liver of this group was also higher than other groups on MCDD. The reasons for that are unclear. It appears that changes in the liver fatty acid composition, due mainly to n-3 lipids, may increase the activity of some anti-oxidant enzymes. A potential mechanism for the induction of hepatic anti-oxidants following butter feeding might be an increase in the expression of their genes; induction of the expression of anti-oxidant enzymes has been reported in circumstances where an increase in free radicals is produced, such as ageing[42].

Analysis of the fatty acid composition in the rat liver showed that MCDD increased palmitoleic and oleic acids percentage in the liver, but not palmitic acid. NASH patients showed increased overnight fasting serum levels of palmitic, palmitoleic and oleic acids[5], suggesting that the source of these fatty acids in the liver is from blood circulation and not from gastrointestinal tract. Hepatic long-chain PUFA n6/n3 ratios increased in MCDD + olive oil, MCDD + fish oil and MCDD + butter fat groups in comparison with the control group. Increased long-chain PUFA n-6/n-3 ratio in the liver of NASH patients may favor lipid synthesis over oxidation and secretion, thereby leading to steatosis[6]. This ratio increased less in MCDD + fish oil group, yet the MCDD + olive oil group had a lower fat content in the liver, making this ratio less effective in determining fatty acid content in the fatty liver in the MCDD rat model.

Although the MCDD model of fatty liver is the most commonly used in experimental studies, one limitation of our study is that MCDD model is not the ideal model for studying insulin resistance in humans and an extensive number of additional experiments would be required to be performed in order to derive definitive data in insulin-resistant models[26]. Another concern is that the rats fed MCDD for nine weeks did not develop the same phenotype as previous reports of MCDD-induced NASH in mice (as short as 10 d of MCDD). The phenotype described here largely consisted of marked steatosis with mild inflammation and mild fibrosis[43].

In conclusion, olive oil decreases the accumulation of triglycerides in the liver of rats with NASH, thereby suggesting that olive oil should be included in the diet of patients with NASH and NAFLD.