Eltrombopag is an orally administered thrombopoietin receptor agonist linked to a heightened risk of treatment-related thromboembolism. Both venous and arterial thromboses have been documented in the medical literature.

A rapid upsurge in platelets, rather than their absolute number, may trigger thrombotic events in this setting. For patients at high thrombotic risk, individualized eltrombopag dosing and vigilance in platelet monitoring are perhaps needed during treatment of ITP.

Core Tip: Eltrombopag is a thrombopoietin receptor agonist carrying an increased risk of treatment-related thromboembolism. Reports implicating both venous and arterial thromboses have appeared in the medical literature. Herein, we describe a patient with immune thrombocytopenia but no signs of nephropathy who developed renal vein thrombosis and pulmonary embolism while receiving eltrombopag. During subsequent anticoagulant treatment, the renal vein thrombus spontaneously resolved, restoring venous circulation. A rapid upsurge in platelets (as opposed to their absolute count) may be the chief determinant of such thrombotic events during cytopenic downturns.

Eltrombopag is an orally administered thrombopoietin receptor agonist (TPO-RA)[1-4]. Its indications include immune thrombocytopenia (ITP) refractory to standard treatments (steroids, immunosuppressants, and splenectomy) where there is risk of bleeding[3,4]. However, various studies and sporadic case reports have shown an increased risk of treatment-related thromboembolism[5-7], documenting both venous and arterial thromboses[1,8]. Superior sagittal sinus and portal vein thromboses are even known to occur[7,9].

Herein, we describe the development of renal vein thrombosis and pulmonary embolism in a patient given eltrombopag for ITP. This occurred in the absence of nephropathy. During subsequent anticoagulant treatment, the renal vein thrombus spontaneously resolved, restoring venous circulation.

Chief patient complaints were acute abdominal pain around the navel and distension for 1 wk, with a 5-d bout of constipation.

Abdominal pain and distention started a week ago and worsened. There were no other symptoms (i.e., breathlessness, chest pain, hemoptysis, or syncope).

The patient had a 3-year history of ITP responding poorly to daily oral prednisone (60 mg initially, gradually tapered to 5 mg and taken for months), with platelet counts hovering at 10-30 × 109 /L. One and one-half months earlier, the platelet count further declined, prompting a boost in prednisone dosage (to 60 mg daily) and addition of oral danazol (0.1 g bid) until 2 wk before admission. At that time, she developed epistaxis, and the platelet count plummeted (6 × 109/L). Given the poor response to treatment, her hematologist withdrew the prednisone/danazol regimen in favor of oral eltrombopag (25 mg daily), which she received for nearly 2 wk before seeking our care. One week before admission, her platelet count was 60 × 109/L.

Upon admission, the physical examination revealed abdominal tenderness, with guarding and rebound pain around the navel; and there was pain on percussion in the right renal area. No lower limb swelling or edema was detected.

Results of blood analyses and urinalysis are shown in Tables 1 and 2.

Computed tomography (CT) of the abdomen (with intravenous contrast) demonstrated near-occlusive thrombosis of right renal vein (Figure 1A and B), extending to the inferior vena cava, and there were right pulmonary artery pulmonary emboli (PE) on the enhanced chest CT (Figure 1F). The right kidney was also enlarged, displaying poor perfusion at upper and lower poles (Figure 1C), and adjacent intestine was distended by gas (Figure 1D). When evaluating effects of PE as sequelae of renal vein thrombosis, no right ventricular dysfunction or hemodynamic compromise was evident by echocardiography. All cardiac chambers were normal in size, with no signs of pulmonary hypertension [ejection fraction, 60% (normally > 55%); left ventricular end-diastolic diameter, 48 mm (normally < 52 mm)] (Figure 1). 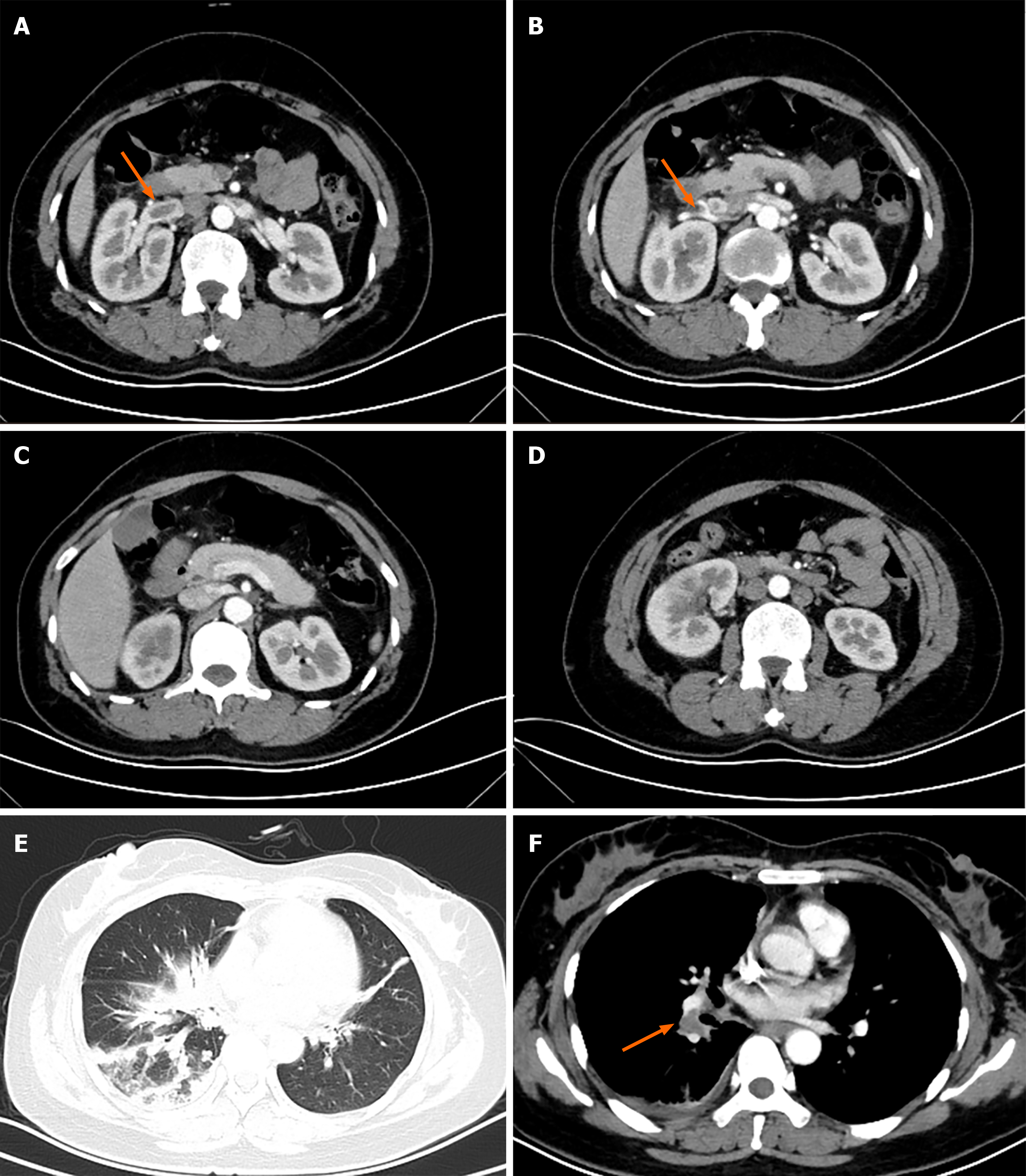 We chose to start oral rivaroxaban (15 mg bid) as anticoagulant therapy. Eltrombopag was then discontinued, having fostered a rapid platelet upswing and thrombotic proclivity. After 1 wk of rivaroxaban, the patient’s abdominal pain remained unabated, and near-complete occlusion of the right renal vein persisted on renovascular ultrasound. Thrombolytic infusion of recombinant tissue plasminogen activator (rt-PA, 50 mg intravenously) was intended, once the platelet count stabilized (141 × 109/L). As a protective measure, a retrievable permanent filter was implanted within the inferior vena cava, cephalad to renal vein (Figure 2A). Nonetheless, a widespread pruritic allergic rash (contrast-induced) of the trunk and limbs appeared several hours thereafter, and the platelet count dropped to 24 × 109/L. Thrombolysis was abandoned as a result, instead administering intravenous methylprednisolone (40 mg bid) to treat both cutaneous and hematologic manifestations. 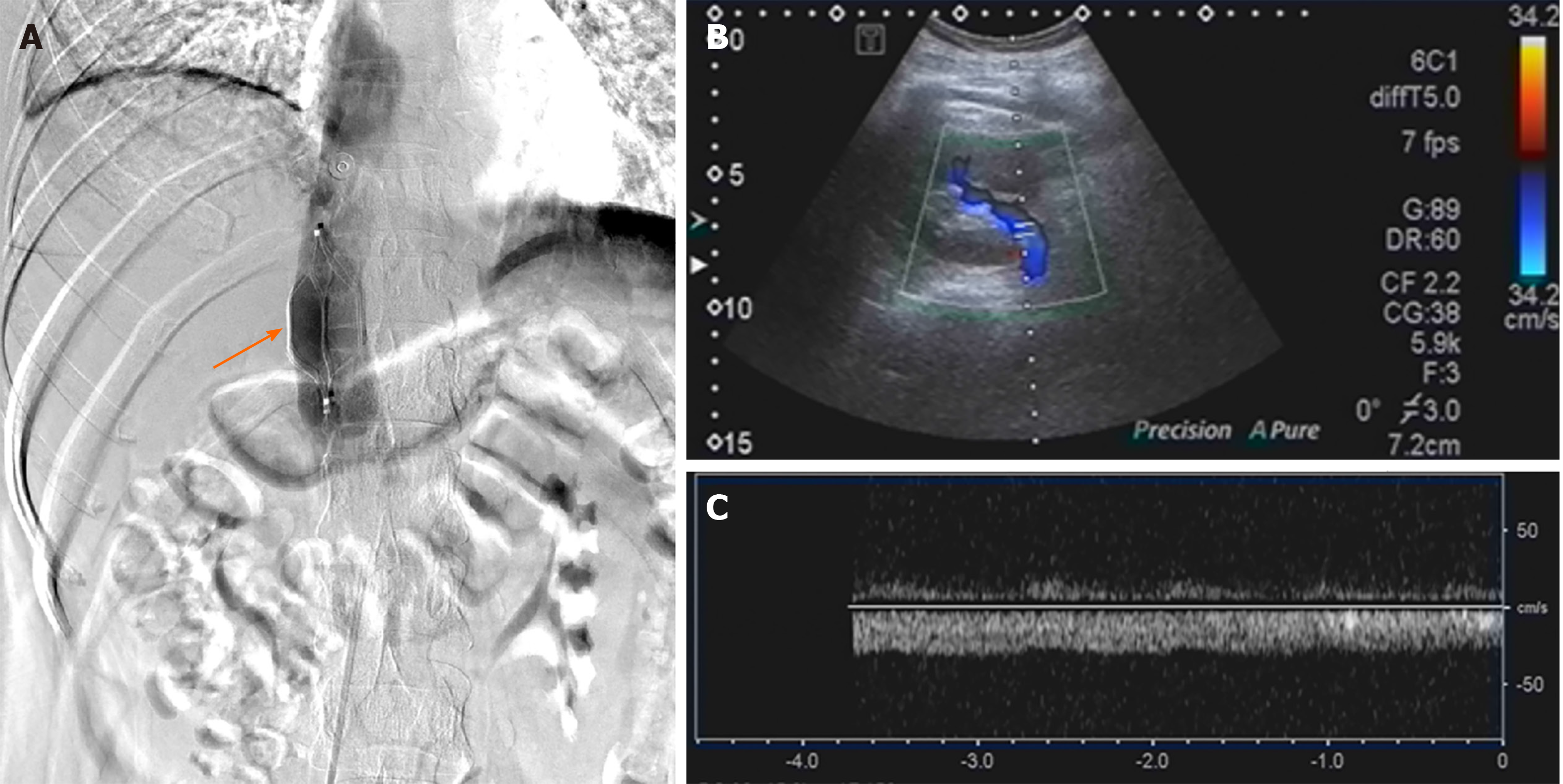 Figure 2 Renovascular ultrasound obtained 1 wk later (after filter implantation) confirmed that the thrombus of the right renal vein had resolved. A: Retrievable permanent filter implanted within the inferior vena cava, cephalad to the renal vein; B and C: Renovascular ultrasound (1 wk post-implantation) confirming resolution of the right renal vein thrombus and normalization of kidney size. 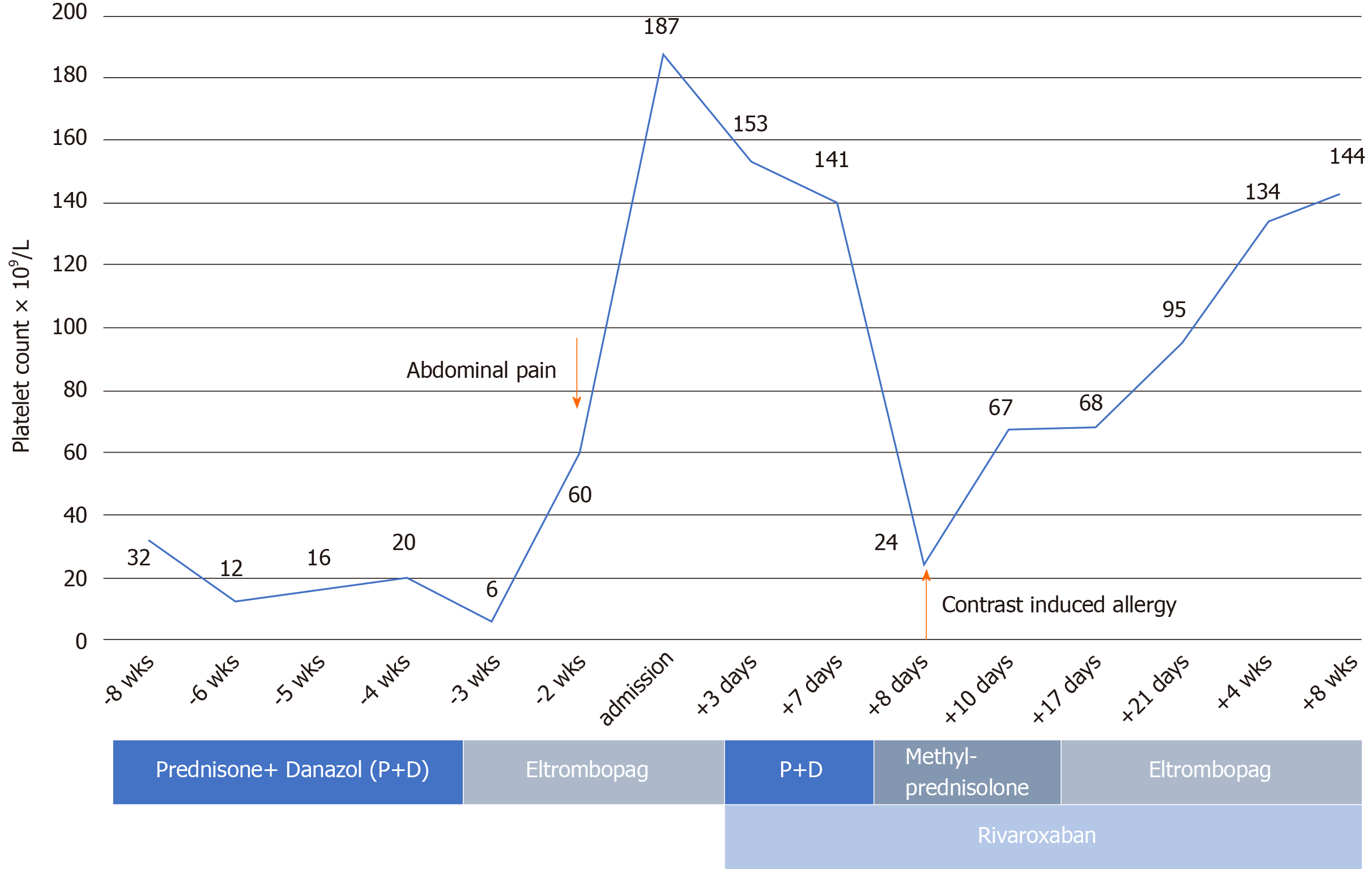 At discharge, the patient was relatively stable in terms of platelet count, having shown resolution of both renal thrombus and pulmonary emboli.

Since earning approval by the European Medicines Agency in 2009, the new pharmacologic class of TPO-RAs has been pivotal in treating ITP[5], serving to stimulate megakaryopoiesis and increase platelet counts[10]. Eltrombopag is indicated as a second-line agent for patients refractory to other treatments and is the only daily oral TPO-RA available[11]. It is a safe and effective therapeutic option in instances of resistant or relapsed ITP[5]. However, there is a heightened risk of thrombosis (venous and arterial) associated with the use of either eltrombopag or romiplostim (another TPO-RA given in weekly subcutaneous injections)[8]. Various reports have documented deep vein thrombosis, pulmonary embolism, portal vein thrombosis (PVT), and extensive cerebral venous sinus thrombosis, as well as ischemic strokes and myocardial infarctions[3,6,12,13].

Deep renal vein thrombosis as a consequence of TPO-RAs and in the absence of proteinuria has yet to be described in the literature. This case highlights the potential for uncharacteristic eltrombopag-related thrombotic events in the course of ITP treatment. Until now, the relation between TPO-RAs and thrombosis has been somewhat tenuous. Thromboembolic events recorded during the 3-year follow-up in an extended study exceeded those experienced by the general population[14], affecting 5% of patients[3]. In one disproportionality analysis, the median time from first TPO-RA exposure to thrombosis was 76.6 d (range, 3-597 d), with median times for venous and arterial events of 77.6 d (range, 3-597 d) and 76.2 d (range, 3-478 d), respectively[15]. Thrombocytosis was found in 44.7% and 50.0% of subjects, respectively, with mortality rates of 31.1% after arterial thrombosis and 11.7% after venous thrombosis[15]. In the French Pharmacovigilance assessment (2009-2013)[5], at least one other risk factor was demonstrated by 15 (83.3%) patients with venous thromboses after TPO-RA exposures. Thrombocytosis was observed in 4 (22.2%) patients, and 10 (55.6%) were subjected to prior splenectomies[5]. At no times were platelet counts elevated during arterial thrombotic events, although myocardial infarction was associated with intravenous immunoglobulin use in another study[11].

Unfortunately, underreporting of adverse drug reactions is likely, and the data that is reported may be incomplete. Despite good responses and the therapeutic potential of eltrombopag in an array of disorders, such as aplastic anemia[16] and post-transplant cytopenias[11,17], its thrombotic ramifications are worthy of closer scrutiny. Other researchers have determined that in patients with chronic liver disease given TPO-RAs for thrombocytopenia, eltrombopag use seems to carry some risk of PVT, even though the incidence of PVT is not increased[18]. In addition, an increase in eltrombopag dosage (from 25 mg to 50 mg) has culminated in extensive cerebral venous sinus thrombosis for one patient with ITP[9].

Herein, we have reported eltrombopag-related venous thrombosis at an unusual site (renal vein) during a 1 wk exposure, marked by onset of abdominal pain. To our knowledge, this is the first reported occurrence of renal vein thrombosis in association with a TPO-RA. Routine diagnostics provided no evidence of nephropathy or proteinuria, and lower-limb deep vein thrombosis was excluded. Phlebography conducted later disclosed only a thrombus of the renal vein extending to the inferior vena cava. Although acute-phase absolute platelet counts were not indicative of thrombocytosis (60 × 109/L), this patient experienced a rapid rise in platelets relative to baseline level (from 6 × 109/L to 60 × 109/L in 1 wk). The corticosteroids previously instituted may have conferred prothrombotic effects as well, serving as a second independent risk factor.

Close and frequent monitoring of platelet counts would thus be prudent when initiating TPO-RA therapy, especially if other known thrombotic risk factors are present. The dramatic platelet fluctuations engendered by eltrombopag may perhaps require individualized dosing to temper this effect and reduce chances of subsequent thrombosis. Despite our canceling of intended rt-PA therapy (due to low platelets), thrombolysis occurred spontaneously in conjunction with rivaroxaban treatment, restoring renal vein circulation. This underscores the importance of adequate anticoagulation in patients with newly formed or fresh deep vein thromboemboli, encouraging spontaneous resolution.

The present case illustrates that eltrombopag treatment of ITP in the absence of nephropathy may predispose to renal vein thromboembolism. Rapid recovery from thrombocytopenia may be culpable, even if platelet counts remain depressed. In patients at high risk of thrombosis, individualized eltrombopag dosing and vigilance in platelet monitoring may be needed during treatment of ITP.

We wish to thank the patient, her family members, and our co-workers for their contributions to this study.