Granulomatosis with polyangiitis is a necrotizing inflammation of small and medium-sized vessels accompanied by formation of granuloma, involvement of primary granulomatous upper and lower respiratory tracts, glomerulonephritis, and vasculitis of small vessels.

Herein, we described a case of a 52-year-old man admitted with pulmonary nodules and high fever. Autoantibody workup revealed that the patient was positive for c-anti-neutrophil cytoplasmic antibodies and proteinase-3 anti-neutrophil cytoplasmic antibodies. Pulmonary biopsies revealed a local granulomatous structure. The patient received therapy with methylprednisolone and intravenous immunoglobulin, and his clinical symptoms improved.

Intravenous immunoglobulin may act on granulomatosis with polyangiitis similar to immunosuppressants.

Core Tip: By reviewing a patient diagnosed with granulomatosis with polyangiitis, we found that intravenous immunoglobin combined with methylprednisolone can reduce the symptoms of pulmonary hemorrhage. These findings differ from previous reports, and provide more possibilities for the treatment of similar conditions.

Granulomatosis with polyangiitis (GPA) is a systemic disease characterized by necrotizing vasculitis and granulomatous inflammation. The inflammatory destructive lesions may develop in any organ. The evolution of GPA can be rapid and aggressive, and its mortality rate is 82% within 1 year when left untreated[1,2]. The classical clinical triad of GPA includes the upper respiratory tract, lower respiratory tract, and renal involvement[3]. Chronic sinusitis, epistaxis, and otitis media are the dominant clinical features of GPA in the upper respiratory tract, and 30%-50% of patients have otological involvement[4]. Approximately 8% of patients with GPA develop diffuse alveolar hemorrhage (DAH), a prominent and life-threatening pulmonary manifestation of this disease[5,6].

Herein, we report a rare case of GPA from China, which presented as high fever with DAH and otitis media.

A 52-year-old male patient of Zhuang ethnicity had a cough for 1 mo. The patient had previously taken antibiotic treatment for cough and otitis media, which presented as pain and impaired hearing in the outer court for 1.5 mo.

The patient’s symptoms started 1 mo prior with recurrent attacks of paroxysmal cough. At 10 d prior to admission, the patient had a fever and reported 3 kg weight loss in the past month.

The patient had no previous medical history, and no history of smoking or drinking.

The patient has no personal genetic history or family history.

Physical examination on admission revealed a temperature of 36.5 °C and heart rate of 106 bpm; and no lymphadenopathy was detected. The cardiovascular, and neurological examinations were unremarkable. The right eye had mild conjunctival hyperemia. Harsh breath sounds were heard in both lungs, and moist rales and voice tremor enhancement were heard in the left upper lobe.

Routine blood examination showed that white blood cell (WBC) count was 10.55 × 109/L, hemoglobin was 108.30 × 1012/L, neutrophil percentage was 0.828, procalcitonin was 0.428, erythrocyte sedimentation rate (ESR) was 91 mm, and C-reactive protein (CRP) level was > 200 mg/L. Liver function test showed that total bilirubin was 29.1 μmol/L, direct bilirubin was 23.3 μmol/L, and alanine aminotransferase and aspartate aminotransferase were within normal range. Coagulation function examination showed that prothrombin time was 16.7 s, activated partial thromboplastin time was 33.4 s, fibrinogen was 6.68 g/L, antithrombin was 74%, and D-dimer was 807 ng/mL. Electrolytes and renal function were within normal limits. Urine showed a pH of 5, specific gravity of 1.030, urine bilirubin + 1, urobilinogen + 2, urine protein ±, and no red blood cells or WBCs in the high-power field. Stool was positive for liver fluke, and blood culture was negative.

Bronchoscopy revealed remarkable tracheal and endobronchial mucosal erosion, congestion, and inflammation. Chest computed tomography (CT) revealed multiple pulmonary nodules, enlarged hilar and mediastinal lymph nodes, and pleural effusion in bilateral lungs. The lesions were not enhanced in the CT images (Figure 1). No enhancement was found in the susceptible sites of tuberculosis, so the possibility of lung cancer was temporarily ruled out. 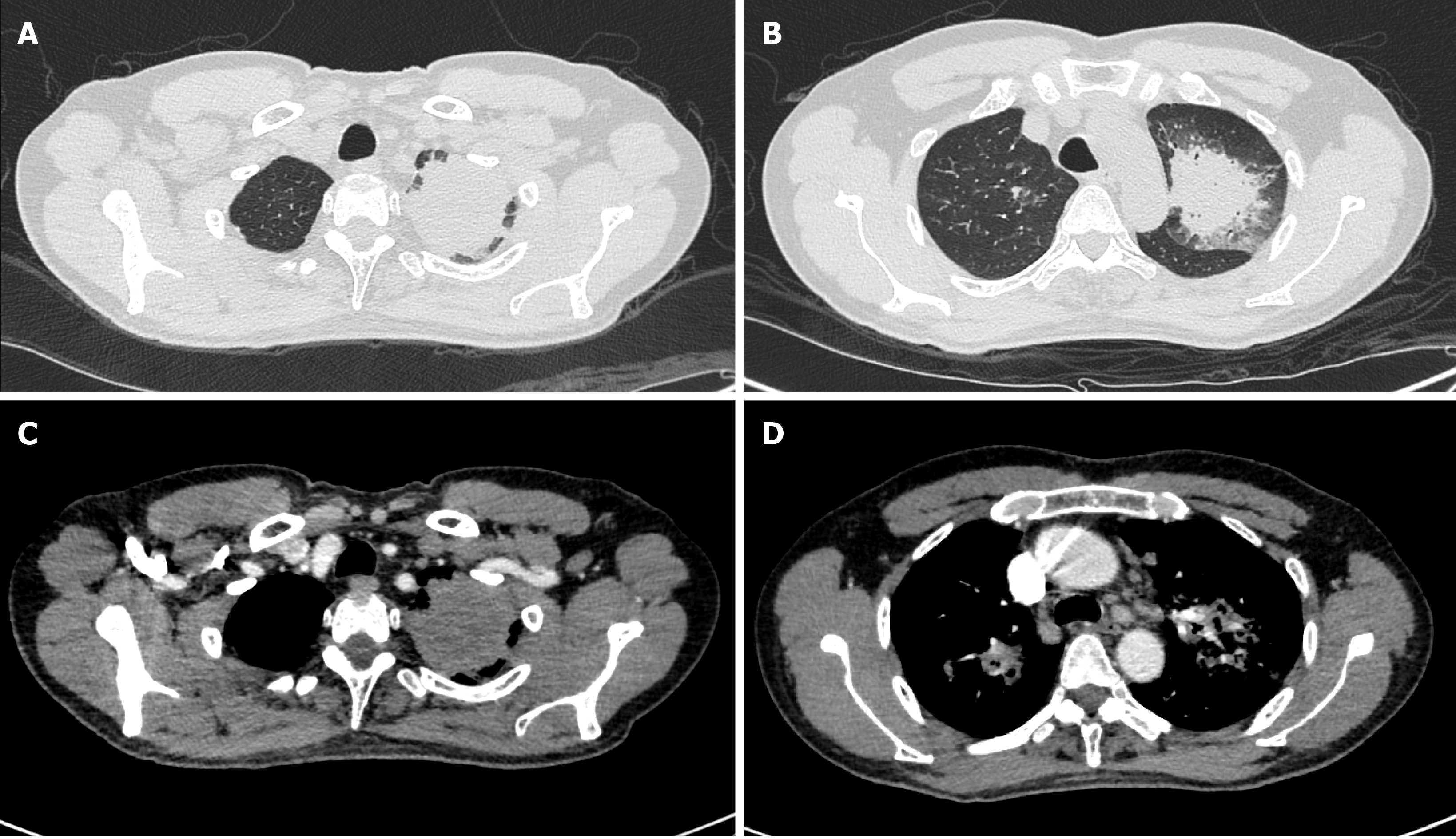 Figure 1 Chest computed tomography scan at admission. A: Multiple masses and nodules were found in both lungs; B: Multiple consolidation in both lungs; C: No obvious enhancement was found in the nodules; D: Hilar and mediastinal lymphadenopathy.
Further diagnostic work-up

The final diagnosis was GPA.

After the patient was admitted to the hospital, trial anti-tuberculosis treatment (0.3 g isoniazid + 0.45 g rifampicin + 0.75 g ethambutol) was initiated (from November 4, 2019 to November 10, 2019), supplemented with anti-infection (2.0 g cefoperazone sodium and tazobactam sodium and 0.4 g levofloxacin), antipyretic, and symptomatic supportive treatment. However, high fever and shortness of breath persisted. After the results of autoantibody examination, chest CT scan and biopsies, the patient received methylprednisolone combined with intravenous immunoglobulin (IVIG) therapy. Emergency bronchoscope-assisted tracheal intubation was performed on the second day of remission induction because the patient had a disturbance of consciousness and low pulse oxygen at 79%. Tracheal blood secretion was observed under bronchoscopy. During the full-dose full-period administration of methylprednisolone (80 mg, once a day [qd], from November 12, 2019 to November 18, 2019) and IVIG (20 g, qd, from November 12, 2019 to November 18, 2019), the patient’s breathlessness was significantly improved. Thereafter, the treatment plan was changed to cyclophosphamide (200 mg, every other day [qod], from November 18, 2019 to December 3, 2019) and methylprednisolone (80 mg, qd, from November 18, 2019 to December 3, 2019).

The patient was transferred to the rheumatology and immunology department, and subsequently discharged. During the last follow-up on May 6, 2020, except for bilateral vocal cord paralysis and tinnitus in the right ear with impaired hearing, there was no cough, fever or other discomfort. Reexamination showed no obvious increase in the inflammatory indexes (including WBCs, neutrophils, high-sensitivity CRP, and ESR). No obvious abnormality was found in the liver function, renal function and coagulation function. ANA and anti-neutrophil cytoplasmic antibodies (including pANCA, cANCA, MPO-ANCA, PR3-ANCA) were negative. Chest CT showed that the high-density shadows in both lungs were absorbed more obviously than before (Figure 4).

Figure 4 Chest computed tomography scan re-examination at the last follow-up on May 6, 2020. A: There were strip shadows in both lungs; B: No obvious shadow or nodules were found in both lungs.
DISCUSSION

GPA, a new alternative name for Wegener’s granulomatosis, is a necrotizing inflammation of small and medium-sized vessels accompanied by formation of granuloma, involvement of primary granulomatous upper and lower respiratory tracts, glomerulonephritis, and vasculitis of small vessels. GPA is a heterogeneous disease in terms of severity and clinical manifestations[7,8]. Its annual incidence is 4-21 cases per million, with a higher incidence in Europe, particularly in Southern Sweden, Norway, New Zealand and the United States, and a lower incidence in China[5]. The mean age of patients at diagnosis is 40-50 years[9]. The most frequently affected organ is the lung, which is involved in more than 90% of patients during the course of the disease. The associated lung diseases range from asymptomatic pulmonary nodules to pulmonary infiltrates and fulminant alveolar hemorrhage. Lung nodules and masses are the most common radiographic and CT abnormalities[10]. DAH is a rare fatal complication of GPA that increases the mortality rate of affected patients by six times the normal value[11]. The skin, central nervous system, heart, salivary gland, eye and orbit, breast, gastrointestinal tract, spleen, pituitary gland, thyroid gland, and urogenital tract can also be involved in this disease[9]. GPA is diagnosed when two of the following four criteria are met: Nasal or oral inflammation with ulcers or purulent bloody discharge; chest radiograph showing nodules, cavities, or infiltrates; urinary sediment with red cell casts or microscopic hematuria; and granulomatous inflammation on lung biopsy. GPA has a strong and specific association with c-anti-neutrophil cytoplasmic antibodies, which in combination with anti-proteinase-3 testing, has great significance for early GPA diagnosis because their sensitivity and specificity are higher than 90% and 98%, respectively[5,12]. Early diagnosis and treatment are the key to GPA management. The therapeutic options for GPA are as follows: Cyclophosphamide + corticosteroids, methotrexate + corticosteroids, azathioprine, leflunomide, cotrimoxazole, mycophenolate, cyclosporine, or rituximab[9]. Glucocorticoids with cyclophosphamide are considered the first-line regimen[3,13]. However, treatment-related morbidity and toxicity from prolonged cyclophosphamide therapy remains a major concern. Therefore, safe and effective alternatives are urgently needed. IVIG can reduce the disease activity in diverse autoimmune diseases by interrupting T-cell- or B-cell-mediated immune responses[14]. The results of a French Vasculitis Study Group prospective trial showed that after treatment with IVIG as additional therapy, 16 of the 22 patients experienced complete remission after 6 mo (72.7; 15 with Wegener’s granulomatosis and 1 with microscopic polyangiitis), and 17 patients after 24 mo (77.3%)[15]. This is in agreement with Etienne Crickx’s retrospective study, which supported the use of IVIG in anti-neutrophil cytoplasmic antibody-associated vasculitides patients with refractory or relapsed disease[16]. In Fortin et al[17]’s study, 34 participants with GPA were randomly assigned to two groups: One group was treated with IVIG, systemic corticosteroids, and immunosuppressive drugs; and the other group was treated with systemic corticosteroids and immunosuppressive drugs. The IVIG group showed significant increase in total adverse events, but the two groups had no remarkable differences in mortality, serious adverse events, time to relapse, open-label rescue therapy, and infection rates (Table 1)[17]. Two patients diagnosed with eosinophilic granulomatosis with polyangiitis and drastically progressive neuropathy were successfully treated with IVIG, not steroids, and showed no apparent side effects[18]. Similarly, for chronic residual peripheral neuropathy in eosinophilic GPA (Churg-Strauss syndrome), the number of muscles with low manual muscle testing scores and the neuropathic pain scores also improved significantly 2 wk after IVIG administration[19], which indicated the practicality and effectiveness of IVIG treatment for eosinophilic patients with peripheral neuropathy. In addition, IVIG therapy has been safely used during pregnancy[20,21]. The frequency of cluster of differentiation-positive cells among the CD4+ T cells (which may promote remission in eosinophilic GPA) in the study group (IVIG therapy combined with conventional therapy) was lower than that of the control group (conventional therapy) before therapy, and was significantly increased after IVIG treatment (Table 2)[22].

Our case strengthens the validity of IVIG use. The combination of methylprednisolone and IVIG can considerably improve the symptoms, with less cytotoxic side effects. However, the length of remission induction, the potential side effects compared with cyclophosphamide use, and the best time for administration need further study.

GPA is an autoimmune disease that is rare and difficult to diagnose, and its treatment plan needs to be constantly optimized. Early diagnosis and treatment are the key to managing and treating this lethal disease.

The authors acknowledge the invaluable participation of the patient.