Bronchobiliary fistula (BBF) is a rare disease characterized by an abnormal connection between the biliary system and bronchi. Traditional causes of BBF include trauma and infections, and more recent causes include malignancies and certain cancer treatments. Ramucirumab is an antivascular endothelial growth factor receptor 2 monoclonal antibody, currently used as a second-line treatment for gastric cancer.

A 43-year-old man visited our hospital with the complaint of jaundice. He was diagnosed with inoperable advanced gastric cancer owing to invasion of the hepatic hilum by the tumor. After percutaneous transhepatic biliary drainage (PTBD) and stent placement, capecitabine and oxaliplatin were administered as first-line palliative chemotherapy. The tumor progressed, and paclitaxel and ramucirumab were administered as second-line chemotherapy. However, on the first day of the second cycle, the patient suddenly developed dyspnea and pneumonia. BBF was diagnosed on the basis of the presence of bilious sputum and the results of computed tomography, and PTBD was repeated.

This is the first report of BBF after administration of the new antiangiogenic agent ramucirumab.

Core tip: This report is significant and will be of interest to readers because it describes an extremely rare case of bronchobiliary fistula (BBF) developing after chemotherapy for advanced gastric cancer. Moreover, it is the first report on BBF occurring after the administration of the new antiangiogenic agent ramucirumab.

Bronchobiliary fistula (BBF) is a rare disease with a poor prognosis that presents with respiratory symptoms due to an abnormal connection between the bile ducts and the bronchial tree. First reported in 1850, its best-known cause is an infection-derived liver abscess; other causes include cholestasis, trauma, postoperative complications, and invasion by a malignant tumor[1-3]. Owing to advanced procedures that better detect primary and metastatic malignant liver tumors (e.g., stereotactic radiosurgery, transcatheter arterial chemoembolization, and radiofrequency ablation), the rate at which tumor-associated BBF is reported has increased[4-8]. Here, to the best of our knowledge, we present the first report of BBF after ramucirumab administration for advanced gastric cancer.

He had undergone gastrointestinal (GI) resection owing to a road-traffic accident 20 years earlier.

His medical history and that of his family were otherwise unremarkable.

His abdomen was smooth and soft without tenderness and palpable mass.

Abdominopelvic computed tomography (CT) revealed a gastric mass with significant wall thickening that directly infiltrated the hilar area of the liver and severe bile duct dilatation (Figure 1A and B). Under ultrasonograpy guidance, we decided the percutaneous transhepatic biliary drainage (PTBD) via left anterolateral approach. Left segment 3 intrahepatic duct was punctured and pigtail catheter was inserted into the deuodenum portion, and tubogram was done. Obstructive jaundice was confirmed, and there was no leakage or complication after procedure (Figure 1C). Direct liver invasion by an advanced gastric cancer was suspected. Consistent with Bormann type 4 gastric cancer, gastroenteroscopy showed a diffuse lesion accompanied by luminal narrowing and mucosal ulceration (Figure 1D). On positron emission (PET)-CT, the mass appeared hypermetabolic, but there were no distant metastases (Figure 1E and F). 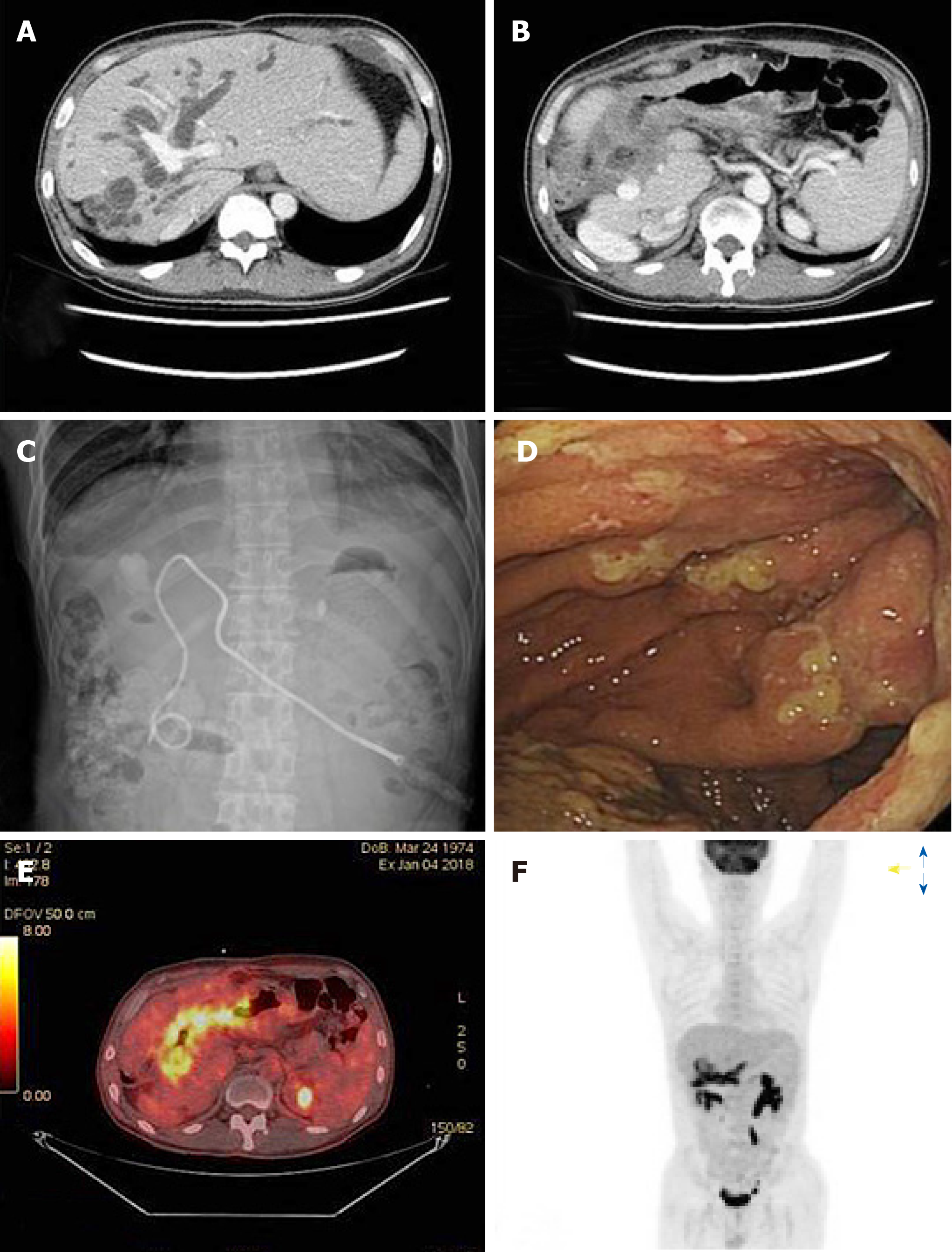 Figure 1 Imaging of admission state. A and B: Abdominopelvic computed tomography shows that the bile duct was severely dilated due to direct infiltration of the hilar area of the liver by a gastric tumor. C: During percutaneous transhepatic biliary drainage, obstructive jaundice was observed. D: Based on gastroenteroscopy findings, diffuse Bormann type 4 gastric cancer was suspected, accompanied by luminal narrowing and mucosal ulceration. E and F: On positron emission tomography-computed tomography, the mass appeared hypermetabolic, but no distant metastases were detected.
Further diagnostic work-up

Total bilirubin levels returned to normal after PTBD, and a metallic stent was placed in the bile duct. The patient was considered inoperable owing to locally advanced gastric cancer; hence, palliative chemotherapy was administered. The patient completed 3 cycles of XELOX combination chemotherapy (capecitabine oxaliplatin, 2000 and 139 mg/body surface area, respectively) without any specific adverse effects, and the treatment response was stable disease. However, after 6 cycles, CT showed signs of disease progression, namely, increased mass size and dilation of the bile duct (Figure 2A and 2B). Because total bilirubin was elevated to 6.1 mg/dL, PTBD and stent placement were repeated again (Figure 2C and 2D). 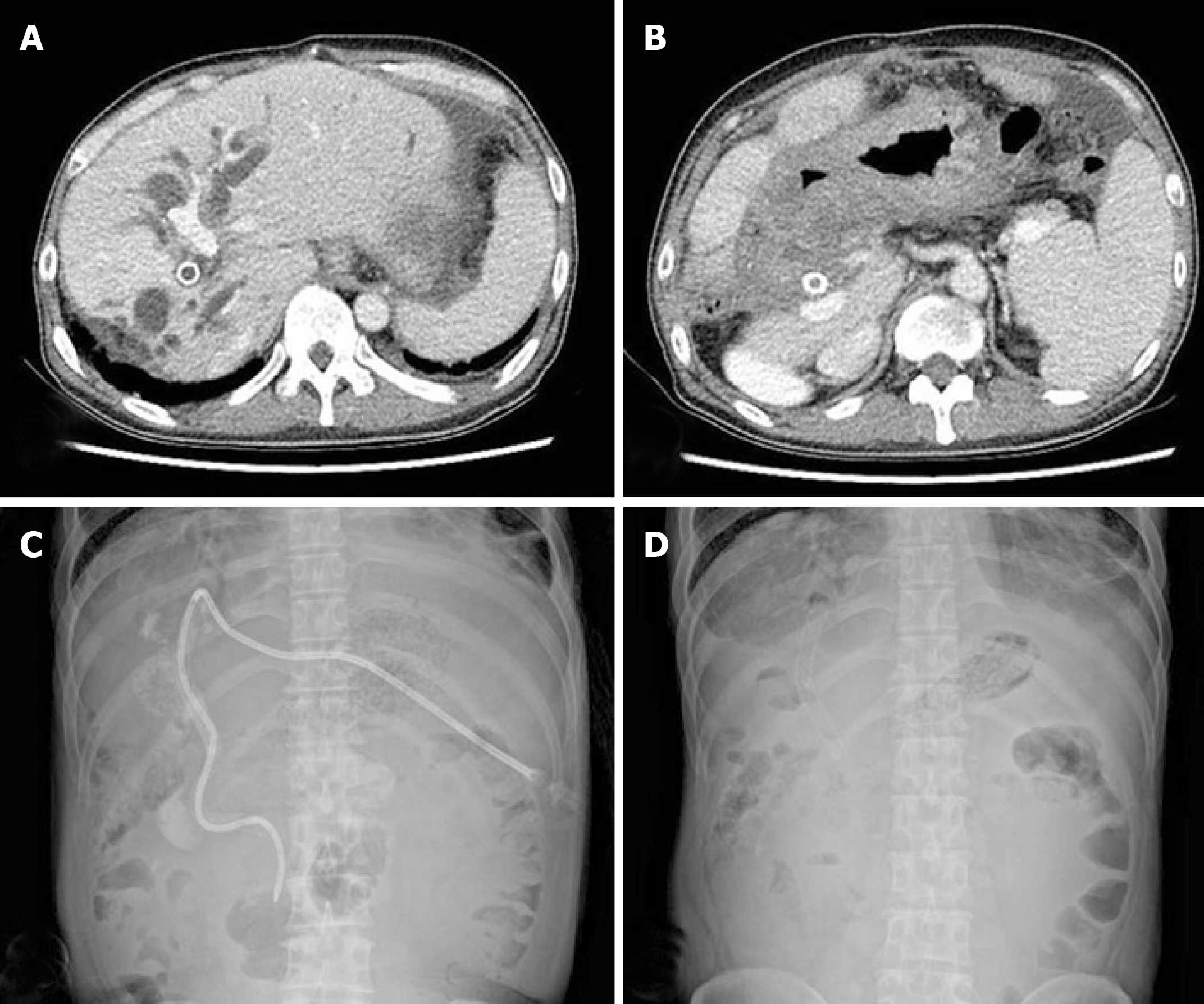 Figure 2 Imaging after first-line chemotherapy. A and B: Computed tomography showed that the bile duct was dilated, indicating disease progression. C and D: To lower the elevated bilirubin level, percutaneous transhepatic biliary drainage and stent placement were performed again.

As second-line chemotherapy, ramucirumab (8 mg/kg; days 1 and 15) and paclitaxel (80 mg/body surface area; days 1, 8, and 15; Q28DAYS) were administered. Ramucirumab is a monoclonal antibody to vascular endothelial growth factor receptor 2 (VEGFR-2). After completing the first cycle, the patient showed no specific discomfort or adverse effects. 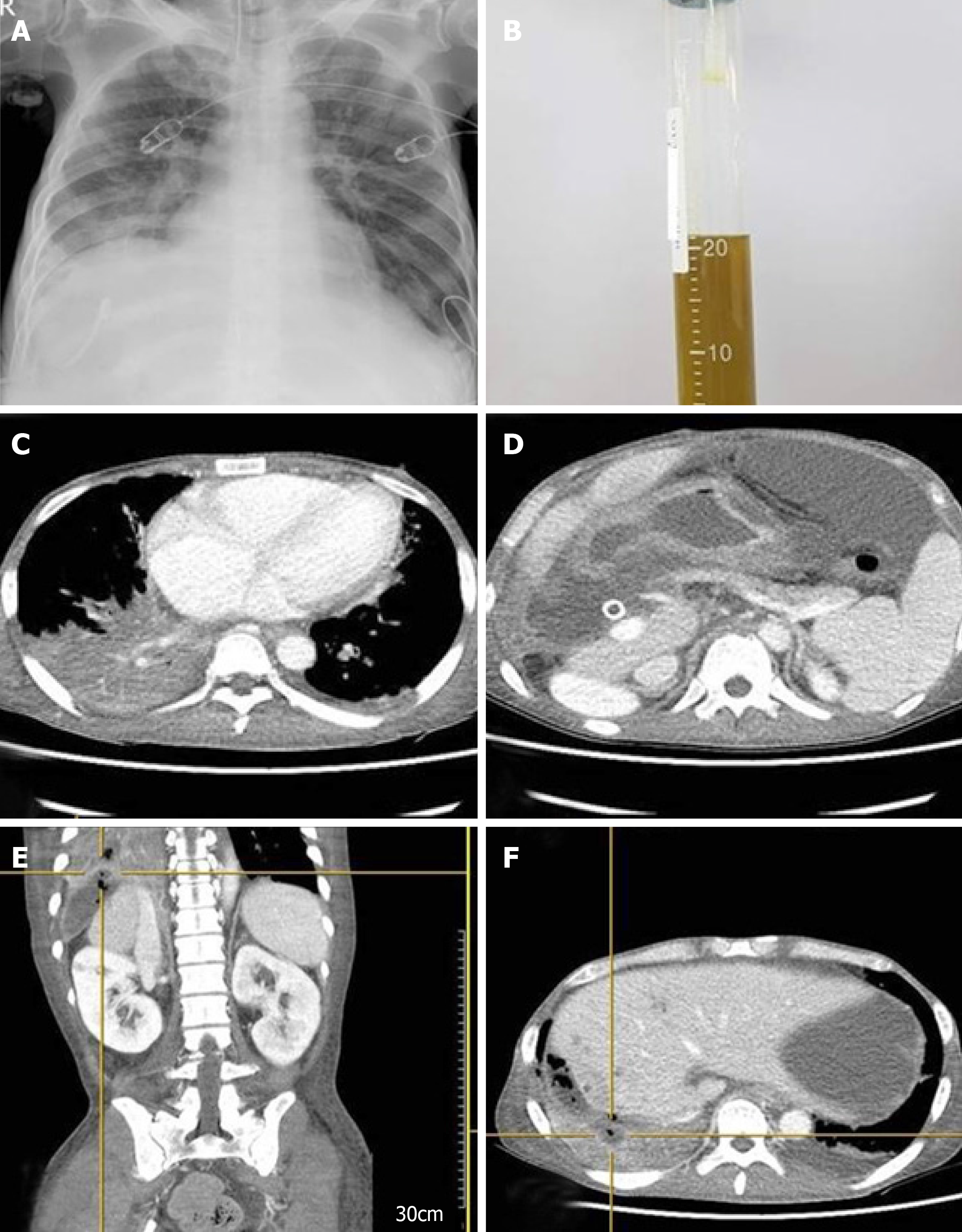 Figure 3 Imaging after emergency room due to respiratory faire. A: Chest X-ray imaging after emergency room admission revealed pneumonic infiltration in the right lower lobe. B: Greenish bilious sputum was observed after intubation. C and D: Thorax and abdomen computed tomography (CT) showed pneumonic infiltration of the right lower lobe and free air in the perihepatic area, accompanied by fluid collection. E and F: Perforation of the diaphragm was also seen on CT, and bronchobiliary fistula was suspected.

After intubation, a large amount of yellowish sputum was observed; the sputum gradually became greenish in color as time passed (Figure 4B). Thorax and abdomen CT showed widespread pneumonic infiltration in the lower lobe of the right lung and free air in the perihepatic area, as well as fluid collection and perforation of the diaphragm (Figure 4C and 4D). Based on the CT findings and the greenish sputum, BBF was strongly suspected. Multidisciplinary consultation was performed to determine the treatment plan. Surgical treatment was initially considered; however, since the patient had terminal cancer, surgery was not performed. Because it was necessary to reduce the amount of accumulated fluid, which was thought to be bile irritating the lung parenchyma, percutaneous drainage and a tubogram were performed in the perihepatic area. The tubogram showed bile juice leaking from the biliary tract and passing through the diaphragm, forming a direct fistula with the bronchus; bile drainage was observed directly, confirming the diagnosis of BBF (Figure 4A-D). The patient continued to receive broad spectrum antibiotics and mechanical ventilation with bile drainage, but the pneumonia continually worsened without improvement until he eventually died. 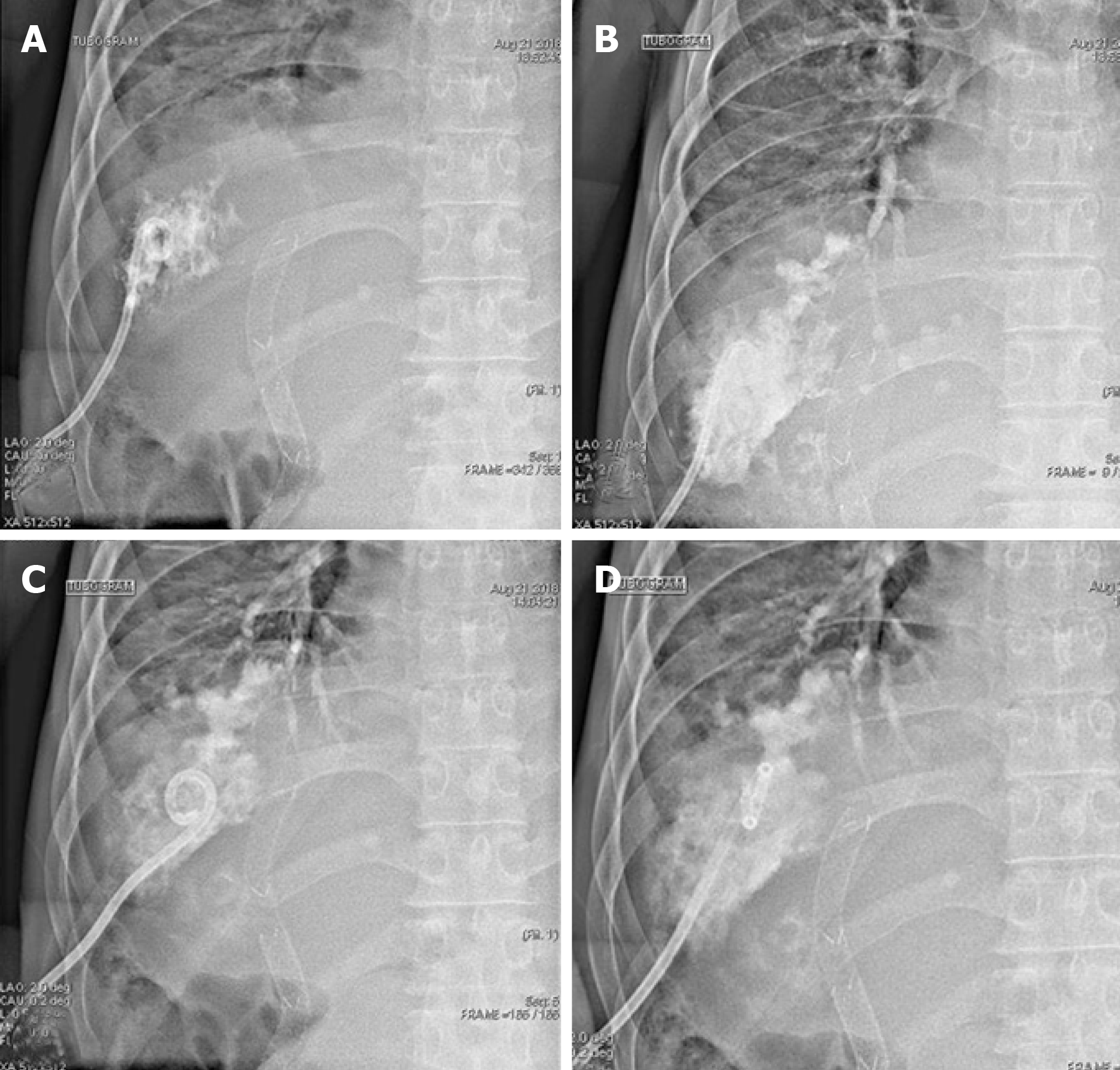 Figure 4 During percutaneous drainage, a tubogram of the perihepatic area showed bile juice leaking from the biliary tract, passing the diaphragm, and forming a fistula directly with the bronchus, confirming the diagnosis of bronchobiliary fistula (A–D).
FINAL DIAGNOSIS

Bile is a very strong irritant that causes a severe inflammatory reaction when it leaks out of the bile duct. In BBF, the leaked bile directly irritates and perforates the diaphragm, causing a severe inflammatory reaction at the lung pleura, ultimately forming a connection between the bile duct and the bronchial tree. BBF has a very poor prognosis: The bile aggravates severe pneumonia, potentially leading to death due to sepsis or acute respiratory distress syndrome (ARDS)[1-8]. Bile leakage in BBF has multiple causes.

In patients with a history of hepatobiliary tract disease, especially those who recently underwent a liver procedure, signs of BBF include respiratory symptoms (e.g., dyspnea or cough), severe pneumonia in the right lower lobe, and a sudden elevation in the levels of liver and inflammatory markers[9,10]. However, owing to its rarity, BFF is difficult to diagnose, with a confirmed diagnosis requiring the presence of bilious sputum and the identification of diaphragmatic perforation on CT or bile connecting to the bronchus on endoscopic retrograde cholangiopancreatography (ERCP) or PTBD[1-4,11,12].

The first aim of BBF treatment is to reduce the amount of bile that drains into the bronchial system. The most effective treatment is surgery to directly suture the fistula after early diagnosis. For BBFs caused by bile duct obstructions of benign origin or liver abscesses, procedures such as ERCP or PTBD can reduce the amount of bile juice entering the bronchus and detect and suture the fistula directly[11-13]. However, once bilious sputum is observed (i.e., BFF is diagnosed), the disease has already progressed to pneumonia in most patients owing to bile-induced inflammation, with dyspnea, ARDS, and sepsis soon following. Moreover, most BBF patients have underlying disorders (e.g., an abscess or tumor) that considerably weaken their systems, making treatment difficult and prognosis extremely poor[1-4,14-18].

Ramucirumab is a monoclonal antibody for VEGFR-2 that is currently used in combination with paclitaxel as an antiangiogenic agent in second-line chemotherapy for gastric cancer[19,20]. Ramucirumab is in the same class as bevacizumab, which is widely used in colorectal cancer. One of the severe effects of bevacizumab is GI perforation, which occurs in 1%-3% of cases[21-23]. The mechanisms for GI perforation are diverse. One mechanism involves the inhibition of angiogenesis and neovascularization by antiangiogenic agents; these processes are required for an adequate blood supply for tissue regeneration after chemotherapy-induced tumor necrosis. Insufficient healing of severe inflammation around the cancer can also result in perforation, as can bowel ischemia due to a tumor thrombus[23-25]. Like bevacizumab, ramucirumab causes GI perforation, although the incidence is lower (around 1.5%). The mechanisms whereby ramucirumab induces GI perforation are thought to be similar to those of bevacizumab, but more investigations are needed[26]. The precise incidence of GI perforation in patients taking ramucirumab also remains to be determined.

In this case study, the main symptom at initial presentation was jaundice due to the direct invasion of the hepatic hilum by the advanced gastric cancer. After PTBD and stent placement, the patient received first-line chemotherapy consisting of capecitabine and oxaliplatin, but the cancer still progressed. Paclitaxel and ramucirumab were administered as second-line chemotherapy. Although the patient’s condition appeared to be stable after the first cycle, he suddenly developed dyspnea and pneumonia. BBF was suspected owing to the presence bilious sputum and was confirmed via CT and PTBD. The following mechanism may be possible: During ramucirumab chemotherapy, we observed perforation of the diaphragm and biloma at the site of the stent in the bile duct. The bile may have irritated the diaphragm and formed a fistula that eventually connected to the bronchus, resulting in BBF.

This is a valuable report as it presents an extremely rare case of BBF after chemotherapy in a gastric cancer patient. Moreover, it is the first reported case of BBF development after administration of the new antiangiogenic agent ramucirumab.