Article-Type of This Article
Clinical and Translational Research

Esophageal cancer is one of the most common malignant tumors of the digestive system, with a 5-year survival rate of 15% to 50%. Cuproptosis, a unique kind of cell death driven by protein lipoylation, is strongly connected to mitochondrial metabolism. The clinical implications of cuproptosis-related genes in esophageal cancer, however, are mainly unknown.

To identify cuprotosis-related genes that are differentially expressed in esophageal cancer and investigate their prognostic significance.

With |log fold change| > 1 and false discovery rate < 0.05 as criteria, the Wilcox test was used to evaluate the differentially expressed genes between 151 tumor tissues and 151 normal esophageal tissues. Cuproptosis-related genes were selected to be linked with prognosis using univariate Cox regression analysis. Genes were separated into high- and low- expression groups based on their cutoff value of gene expression, and the correlation between the two groups and overall survival or progression-free survival was investigated using the log-rank test. The C-index, calibration curve, and receiver operator characteristic (ROC) curve were used to assess a nomogram containing clinicopathological characteristics and cuproptosis-related genes.

Cuproptosis-related genes can be used as a prognostic predictor for esophageal cancer patients, providing novel insights into cancer treatment.

Esophageal cancer is a major global health issue, and its incidence is rapidly increasing[1]. Esophageal cancer is classified into two types: esophageal squamous cell carcinoma (ESCC), which accounts for 90% of all occurrences, and esophageal adenocarcinoma (EAC). In recent years, epidemiological research has revealed that the incidence of EAC has grown 3-4 times, with the proportion increasing[2,3]. Despite significant advances in the diagnosis and treatment of esophageal cancer, the mortality rate varies from 15% to 20%, placing it fourth among all cancer-related deaths[1].

Esophageal cancer is the result of a complex process involving various causes and polygene alterations. Using high-throughput sequencing technologies, a comprehensive mutation catalog was evaluated, and substantial genetic alterations have been discovered in the malignancies. Gene alterations are often linked to aberrant expression and are becoming more essential for the early diagnosis and prognosis of esophageal cancer[4]. Currently, several gene expression products are employed as indicators for esophageal cancer diagnosis and prognosis[5,6]. Somatic mutations in tumor protein p53 (TP53) have been found in more than 83% of ESCCs. Adenocarcinoma and squamous cell carcinoma both have TP53 point mutations[7,8]. In addition, numerous cell cycle-controlling genes are overexpressed in ESCC. For example, cyclin-dependent kinase 4/cyclin-dependent kinase 6 accounted for 23.6%, murine double minute 25.7%, and cyclin D1 46.4%, showing that the above components are implicated in the incidence and development of ESCC[9]. As a result, there is a pressing need to uncover genetic anomalies in esophageal cancer and understand their molecular basis to enhance early diagnosis and minimize esophageal cancer mortality.

Previous studies have reported several types of precisely programmed cell death, including apoptosis, pyroptosis, necrosis, and ferroptosis[10]. Similar to iron, copper is a trace metal in cells that plays an integral role in maintaining protein functions. Excessive copper can cause cytotoxicity, but the exact mechanism is unclear[11]. Tsvetkov et al[12] discovered that the copper carrier elesclomol, which was originally used to treat cancer, kills cells in excess of copper. Elesclomol does not trigger cell death on its own, suggesting that copper toxicity is to blame. Dar et al[13] found that patients with esophageal cancer had considerably higher mean blood copper levels than controls, with a mean copper concentration of 169 g/dL in the cancer group and 149 g/dL in the control group. Therefore, we hypothesized that copper shortage or excess is linked to the occurrence and progression of esophageal cancer. Copper, however, has been linked to the development and progression of esophageal cancer in few studies.

The study did not include any human participants, data, or tissue, nor did it include any animals. All of the information was gathered from a public database.

The Cancer Genome Atlas (https://portal.gdc.cancer.gov/) provided gene expression data and clinical information for 151 esophageal cancer samples, whereas the Genotype-Tissue Expression database (https://xenabrowser.net/) provided gene expression levels for 151 healthy tissue samples. The "limma" package in R was used to conduct matrix normalization. We selected 19 genes from the scientific literature that have been linked to cuproptosis in prior studies[12].

In 151 patients with esophageal cancer and 151 healthy controls, a total of 55185 genes were acquired. The log2 (x+1) scale was used to standardize all of the expression data. Differentially expressed genes (DEGs) were screened between tumor tissue and normal esophageal tissue using the "limma" package and Wilcox-test, with the conditions of |log fold change [FC]| > 1 and false discovery rate (FDR) < 0.05. Using the "limma" package, we evaluated those genes that were differently expressed between esophageal cancer and healthy control tissues based on 19 cuproptosis-related genes. The FDR less than 0.05 was used as a criterion for further investigation. The researcher employed a univariate Cox regression analysis to find predictive markers linked to overall survival (OS) and progression-free survival (PFS). The optimum cutoff value for a prognostic gene was identified using a receiver operating characteristic (ROC) curve. Patients were classified into high-risk (less than the cutoff) and low-risk (greater than the cutoff) esophageal cancer groups based on gene expression cutoff values.

The R package "ClusterProfiler" was used to analyze gene ontology (GO) and pathway enrichment [Kyoto Encyclopedia of Genes and Genomes (KEGG)]. It was deemed substantially enriched when the P value and adjusted P value were both less than 0.05. To identify the functional role of the genes, GO analysis was done on the significantly expressed genes, and the expression levels of the genes were displayed in GO circle plots using the R package "GOplot". To determine tumor-infiltrating immune-cell fractions in esophageal cancer patients, we employed the CIBERSORT algorithm[14]. On samples with a CIBERSORT result of P value less than 0.05, further analysis was performed. Then for reference, we collected 547 gene expression profiles from the CIBERSORT website (http://cibersort.stanford.edu/). The Pearson’s test and the "corrplot" program were used to correlate infiltrated immune cells.

Development of a nomogram for predicting OS

A cuproptosis-related gene and numerous clinicopathological variables were also subjected to univariate and multivariate Cox regression analyses. For predicting the OS, we utilized the R "rms" package to generate a nomogram including pathological categories, American Joint Committee on Cancer (AJCC)-tumor-node-metastasis (TNM) stages, and differential cuproptosis-related genes. The uniformity of the nomogram was assessed using calibration curves to anticipate various OS results. Harrell’s concordance index was used to generate the C-index. The area under the receiver operating characteristic (AUC) curve and ROC were both utilized to evaluate how predictive our nomogram was.

Relationship between clinical parameters and PFS/OS

Table 2 summarizes the relationships between clinical pathological features and these individuals’ OS or PFS. When compared to ESCC, EAC was related to a lower OS (P = 0.011). AJCC-TNM stages III and IV were linked to OS (P = 0.021) and PFS (P = 0.013). When compared to females, males had a lower PFS (P = 0.009). Age, EGFR, BRAF, KRAS, or PIK3CA status, among other clinicopathological variables, were not linked to OS or PFS. 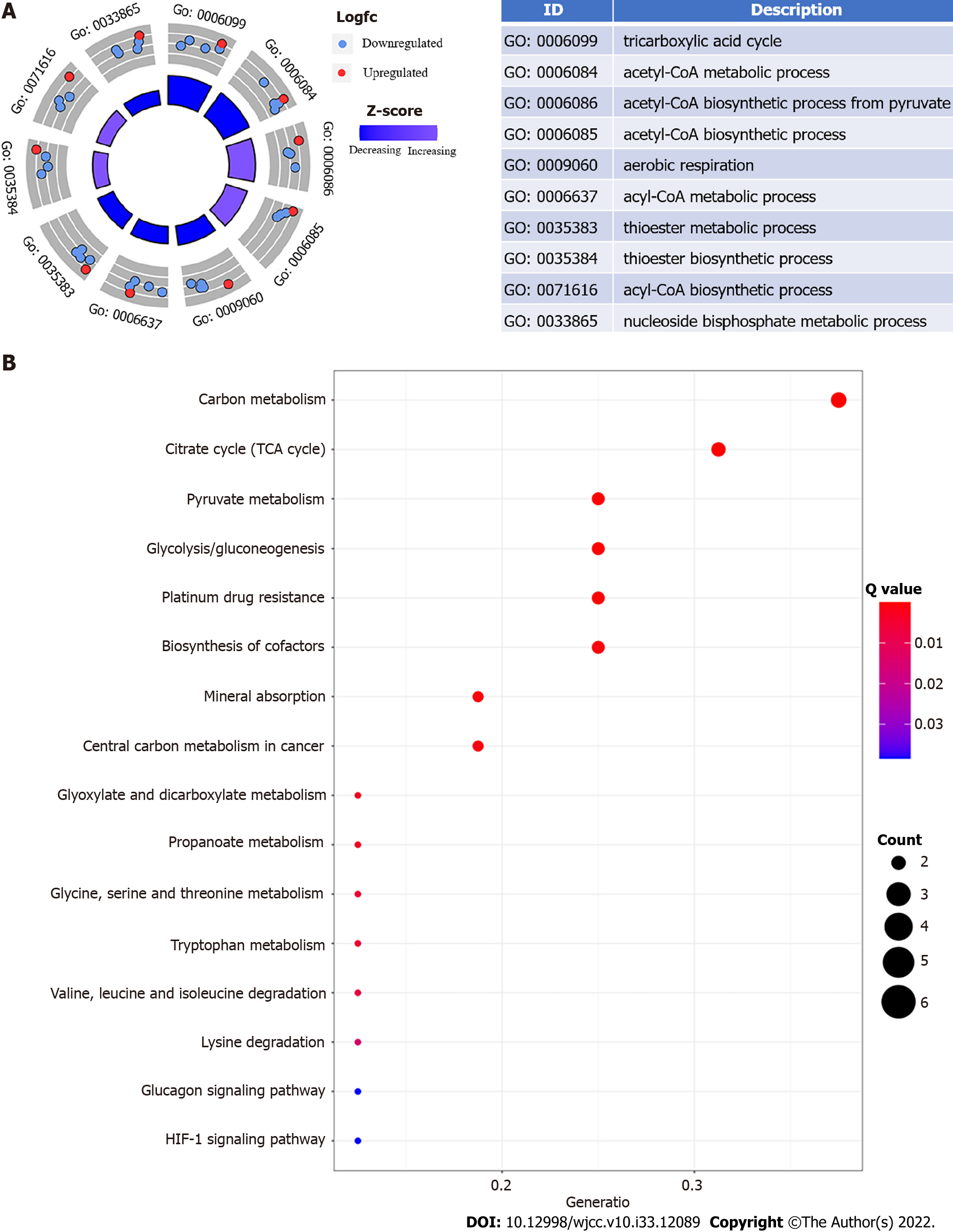 Our study used the CIBERSORT algorithm to examine the ratio of tumor-infiltrating immune cells (TICs) in esophageal cancer to further verify the correlation between PDHA1 and immune cells (Figure 3A). P < 0.05 was used to classify samples as statistically different. The ratio of TICs in the low-risk group was represented by the first 108 of 151 esophageal cancer patients, whereas the ratio of TICs in the high-risk group was represented by the last 43 samples. The correlation between 22 immune cells was represented using a heatmap (Figure 3B). Neutrophils and activated mast cells, macrophages M1 and activated natural killer cells, plasma cells and naive B cells, activated mast cells and activated dendritic cells, and macrophages M1 and naive CD4+ T cells were the top five results with a positive correlation. CD8+ T cells and resting memory CD4+ T cells, on the other hand, were the immune cells that were most negatively associated. Furthermore, the bar graph revealed that the immune infiltration of 22 immune cell types in high and low PDHA1 esophageal cancer patients did not statistically significantly differ (Figure 3C). 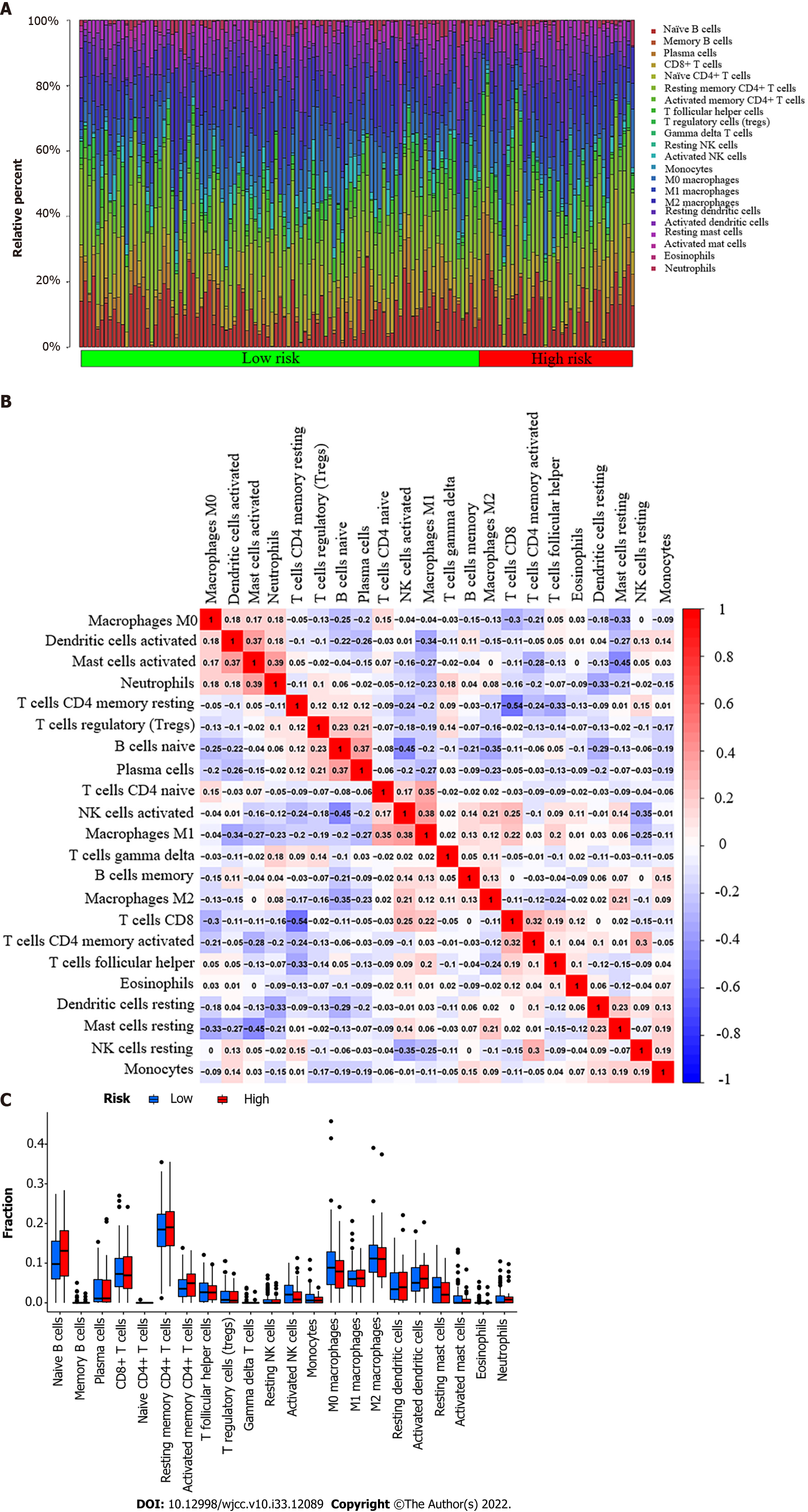 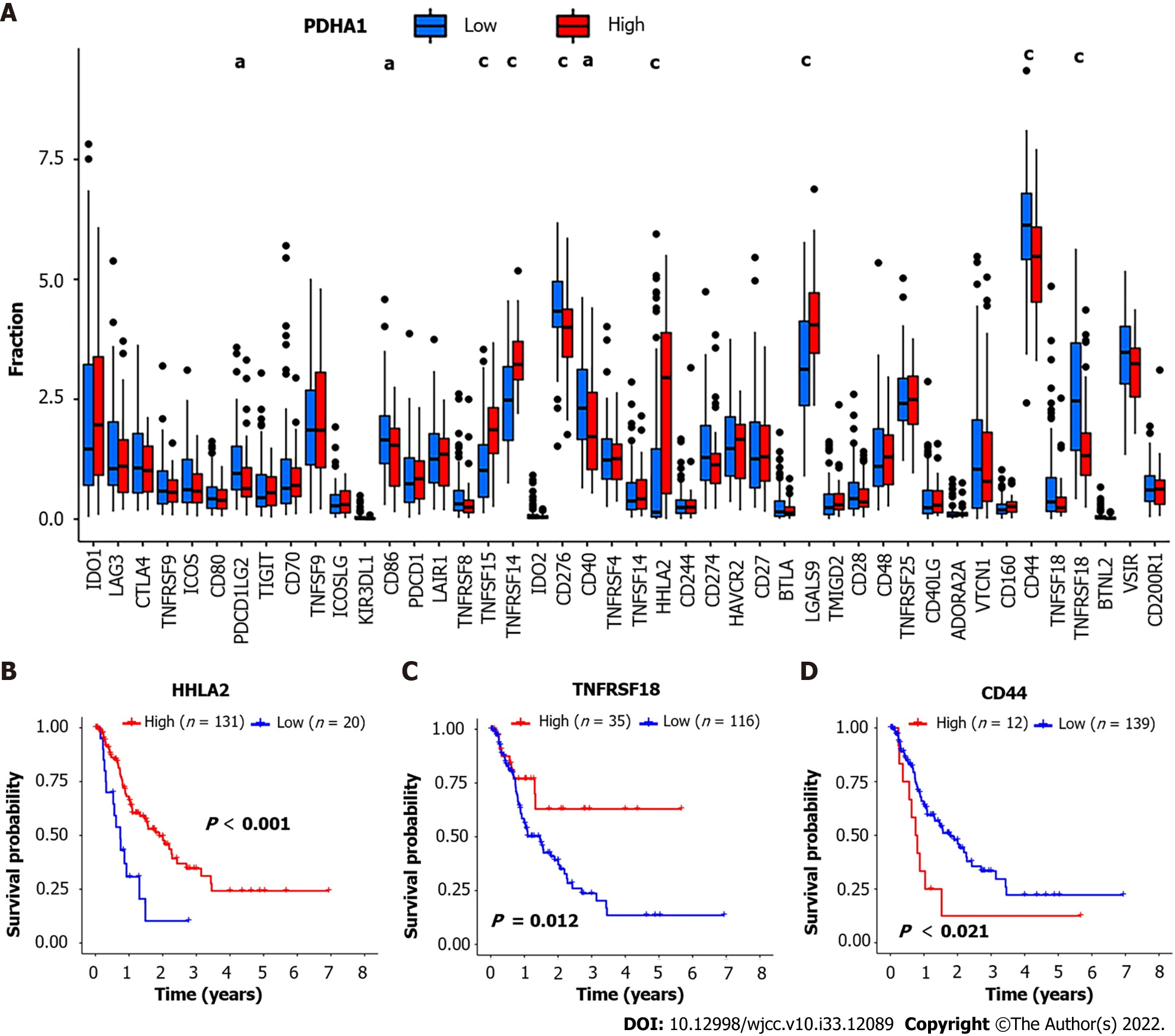 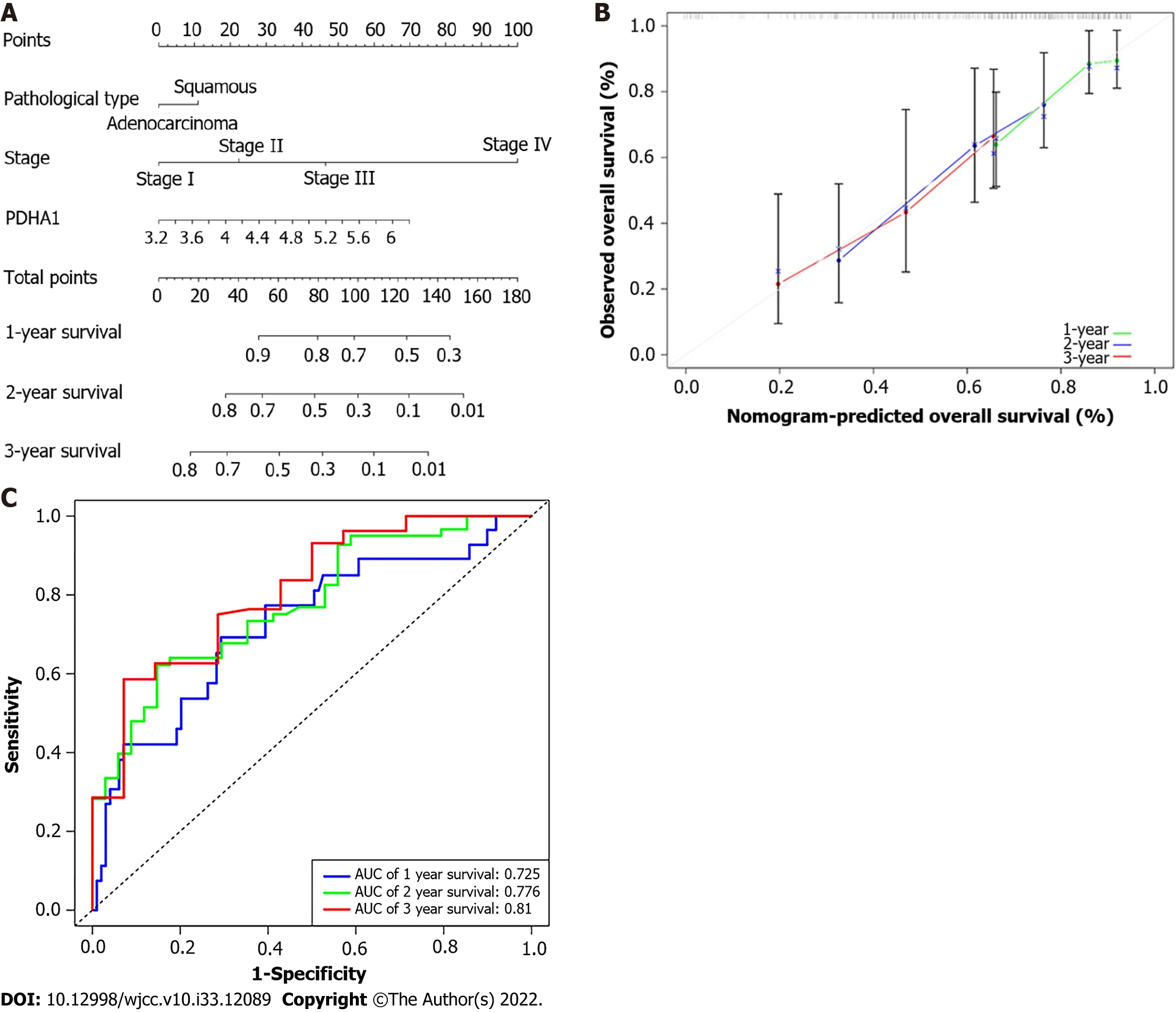 In the present study, we investigated the expression signature of 19 cuproptosis-related genes in esophageal cancer tissues and explored their relationships with OS and PFS. A prognostic nomogram involving gene expression and clinicopathological parameters was constructed for the first time. Functional analysis showed that DEGs were enriched in energy metabolism, especially in pathways related to the tricarboxylic acid cycle. Cuproptosis-related genes were also confirmed to be associated with immune checkpoint genes.

In our study, 151 patients with esophageal cancer and 151 healthy controls were included. In univariate Cox regression analysis, PDHA1 was selected from 19 cuproptosis-related genes to be associated with the prognosis of esophageal cancer. At the same time, PDHA1 expression was also different in tumor tissues and healthy tissues. The results of the present study suggested that the PDHA1 expression was relatively low in cancer tissues, which was consistent with previous studies[16,17]. Li et al[17] also reported that high expression of PDHA1 in ovarian cancer cells was significantly correlated with better OS and PFS. Our results suggested that the high expression of PDHA1 expression was associated with poor OS, but not with PFS.

CIBERSORT and ssGSEA techniques were used to analyze the composition of tumor-infiltrating immune cells (TICs) in each sample. Regulatory T cells and CD8+ T cells have been shown to play an important role in anti-tumor immunity in previous studies[21-23]. Studies have demonstrated that PDHA1 mediates metabolic reprogramming in macrophages[24,25]. However, there was no significant difference between the 22 types of immune cells in the high and low PDHA1 expression groups, according to our findings.

Immune checkpoint inhibitors have recently been studied in a variety of cancers, and they provide a novel therapy option[26]. However, no evidence of a link between cuproptosis and immune checkpoint genes has been found. TNFSF15, TNFRSF14, HHLA2, LGALS9, CD44, TNFRSF18, PDCD1LG2, CD86, and CD40 all have a strong relationship with PDHA1 expression in our recent research. The link between immune checkpoint-related genes expression and prognosis in certain esophageal cancer patients is still debated[27,28]. The immune checkpoint-related genes associated with PDHA1 expression were analyzed using the log-rank test, and the results revealed that HHLA2, TNFRSF18, and CD44 were substantially correlated with prognosis.

Our study had a number of limitations. First, the sample size must be increased to analyze EAC and ESCC individually. Second, if the sample size is high enough, the treatment procedures and stages of the esophagus must be unified. Finally, given that prognostic characteristics were generated and analyzed using data from public databases, further biological evidence, in addition to the statistical evidence we present, was required.

Despite many breakthroughs in treatment, the general prognosis for esophageal cancer, one of the least responsive malignancies to cancer therapy, remains poor. As a result, identifying biomarkers and understanding the molecular mechanisms of esophageal cancer were critical for improving patient outcomes.

Cuproprosis-related genes are correlated to esophageal cancer prognosis, and a deep understanding of its molecular mechanism might contribute to novel cancer treatments in the future.