Two patients, a young female and young male patient, were found to have a mass on the ocular surface. The tumor presented on the superior temporal bulbar conjunctiva in the first patient and on the upper eyelid in the second patient. Ultrasound biomicroscopy detected a strong echo with clear boundaries covering the lower echo, and computed tomography examination revealed calcification. Both patients underwent surgery, and histopathological evaluation of the mass showed osseous choristoma. They were treated by excision and subsequently cured.

Osseous choristomas are usually asymptomatic. Our patients were cured immediately after surgery, suggesting that surgical treatment is an effective strategy.

Core Tip: In this paper, we report two cases of osseous choristoma. Osseous choristoma is mostly seen in young adults and asymptomatic. Physical examination showed a hard mass, and pathology reported the bone structure in the tumor. The prognosis of the disease was good, and no recurrence was observed during follow-up.

Choristoma is a rare, benign, congenital proliferative tumor[1], which is defined as normal tissue that stops migrating during embryonic development and is located in an abnormal position. Epibulbar choristoma normally occurs sporadically and develops alone, or it may be associated with a variety of syndromes[2], such as Goldenhar syndrome, epidermal nevus syndrome, and encephalo-cranio cutaneous lipomatosis. Ocular choristomas can be classified as dermoid, dermolipoma, complex choristoma (choristomas with more than one tissue type), and single-tissue choristoma, among which osseous and complex choristomas are the rarest. The prevalence of epibulbar choristoma ranges from 1/10000 to 3/10000[2] and can occur at multiple sites, predominantly in the cornea, rectus muscle, and conjunctiva. In this study, we reviewed myoblastoma cases treated at our hospital since 2010 and provided reports and detailed preoperative, intraoperative, and postoperative lesion images, including gross and pathological images, of two patients with osseous choristoma.

Case 1: A 23-year-old woman with no obvious predisposing cause was found to have a soybean-sized mass above the outer sphere of her left eye and visited our hospital for more than 6 mo.

Case 2: A 31-year-old man presented with a mass in the right upper eyelid persisting for 1 mo.

Case 1: The patient was asymptomatic with no ocular pain or diplopia as well as no history of eye trauma or surgery.

Case 2: The patient was asymptomatic without any ocular pain or diplopia and had no history of eye trauma or surgery.

Case 1 and Case 2: The patients had no past illness.

Case 1 and Case 2: The patients had no history of familial diseases.

Case 1: Pre-procedure examination of the patient showed a pale-white nodule with a 5 mm diameter on the superior temporal bulbar conjunctiva of the left eye. It presented with a hard texture, mild hyperemia, poorly defined boundary, irregular shape, and no tenderness. The nodule was closely adhered to the substrate and could not be moved. There was no eye protrusion, and eye movement was normal (Figure 1). No abnormalities were found in the anterior and posterior segments.

Figure 1 Preoperative photos of the mass in the superior temporal quadrant of the left eye (case 1).

Case 2: A 5-mm mass was observed on the right upper eyelid. The skin showed redness and swelling, and the mass protruded from the skin surface. The boundary was unclear, and there was no tenderness.

Case 1: Ultrasound biomicroscopy showed a strong elliptical echo in the superficial scleral layer under the bulbar conjunctiva at the superior temporal side, with a clear boundary, obscured inferior echo, and limited scope exploration (Figure 2). Computed tomography imaging indicated a massive calcification lesion of about 1.0 cm × 0.5 cm in the upper left part of the left eye conjunctiva, and the nodule appeared to be cartilaginous (Figure 3). 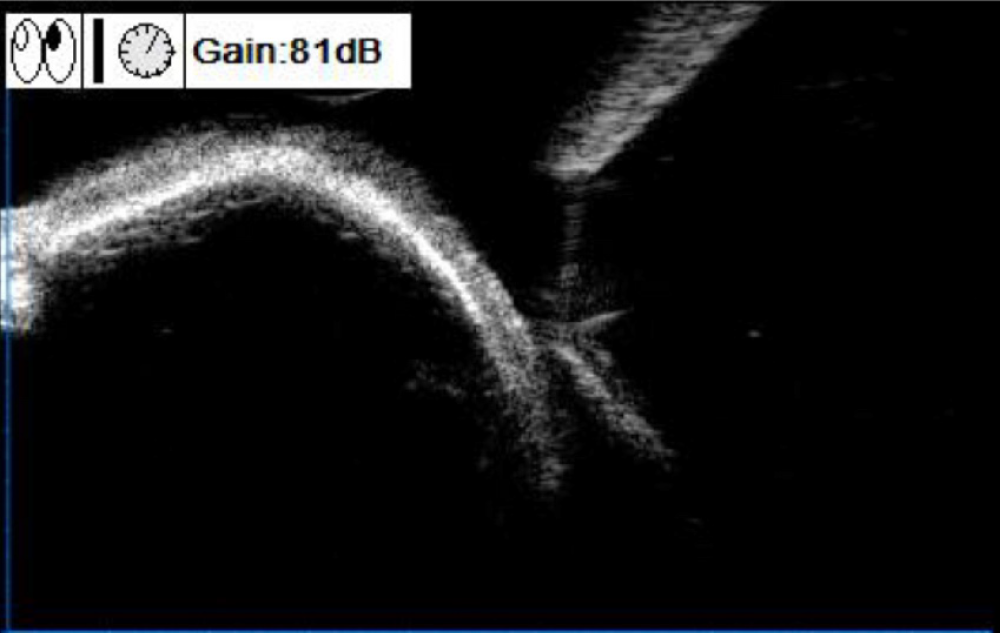 Figure 2 Preoperative ultrasound biomicroscopy image of the mass in the superior temporal quadrant of the left eye (case 1). A strong oval echo was observed in the superficial sclera under the bulbar conjunctiva, with a clear boundary obscuring the lower echo. 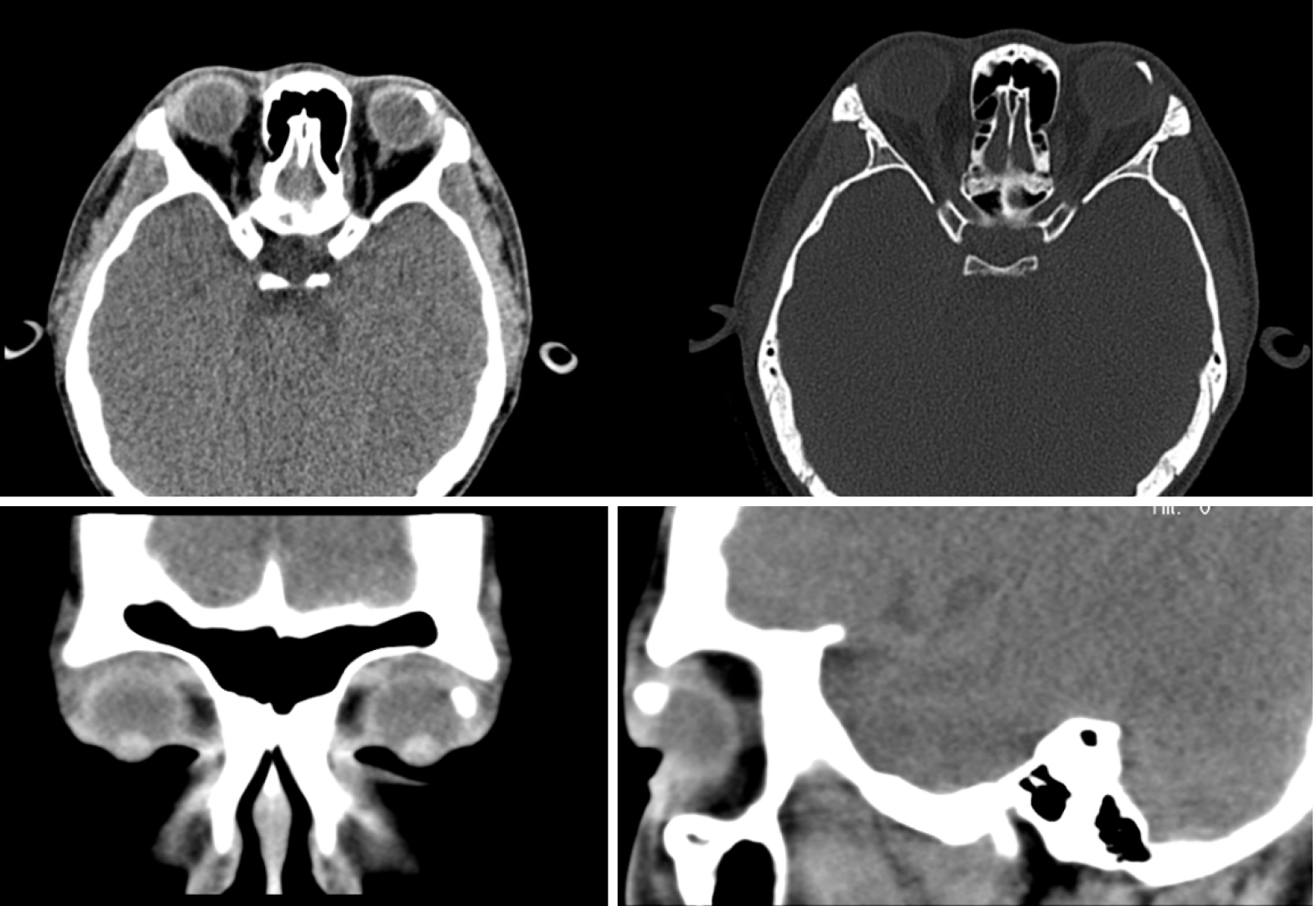 Figure 3 Preoperative computed tomography scan of the mass in the superior temporal quadrant of the left eye (case 1). Lumps of calcification were apparent in the upper left conjunctiva of the left eye.
FINAL DIAGNOSIS
Case 1

Histopathological evaluation confirmed osseous choristoma of the superficial sclera (fibrous connective tissue and fat surrounding the oblate neoplasm; hard as bone; and after decalcification, the tumor tissue was found to be mature bone tissue, with multiple Hastelloy tubes and annular bone plates, and no other soft tissue). The patient was diagnosed with epibulbar osseous choristoma and was cured after surgical excision (Figure 4).

Figure 4 Hematoxylin-eosin staining after resection of the local tumor (magnification, 25 ×). A: Case 1. The pathology showed features of superficial scleral osteoblastoma: Flat and round tumors that were as hard as bone and surrounded by fibrous connective tissue and fat; B: Case 2. The pathology revealed features of osteoblastoma consisting of bone and cartilage tissue surrounded by numerous collagen fibers.
Case 2

Postoperative pathology confirmed osseous choristoma of the right upper eyelid. The tumor tissue was mainly composed of differentiated and mature bone and cartilage surrounded by a large number of proliferative collagen fibers.

We performed surgery to remove the neoplasm from the conjunctiva under local anesthesia; allo-scleral film was prepared to repair sclera. During the operation, the conjunctiva tissue on the surface was separated and the bone lesion with a diameter of 0.5 cm that was adhered to the scleral superficial tissue became visible. The neoplasm had a smooth surface and the sclera beneath was intact without pigment exposure, so it was then separated from the superficial sclera. Therefore, the capsule was sutured intermittently to reinforce the sclera. Postoperative suture removal was normal.

Treatment involved surgery during which one piece of solid tissue was excised. The resected tissue was red and nodular, with a wide base and no adhesion to the surrounding tissue, and also the neoplasm had a smooth surface. So it was then separated and capsule of the eyelid was sutured intermittently. Postoperative suture removal was normal.

Surgery was successful, and the patient was cured. The patient needs to be followed 1 mo after operation. If there are discomfort symptoms, the patient should see a doctor at any time.

The concept of osseous choristoma was first proposed in 1863[5]. Its etiology is unknown and is related to abnormal gene expression and mesenchymal development. Trauma or infection stimulates the bone morphologic proteins, which leads to heterotopic ossification and accelerates the disease progression[3,4]. However, osseous choristoma does not have any malignant metastatic tendency and can be present at birth. It develops rapidly in early childhood and then gradually stabilizes and ceases growth[5], and it may eventually be detected due to symptoms such as foreign body sensation or conjunctival congestion in the later adolescent years.

At present, there is no unified conclusion on the relationship between the occurrence and development of osseous choristoma and sex. Although it has been reported that young women tend to have a high incidence[4-7], the association with sex was not significant due to the small number of cases[2]. Additionally, osseous choristoma is observed more frequently in the right eye than in the left eye, and its sites are mainly distributed in the conjunctiva, sclera, and ophthalmic muscle, with most of them located in the fascia of the superior temporal quadrant[8-10], However, osseous choristoma occurring in the rectus muscle or eyelid is rare[6], and the frequency of these cases has not yet been statistically analyzed[1].

Since 2010, 296 cases of choristoma have been treated at our hospital, including 183 cases of dermoid cysts, 2 cases of osseous choristomas, 15 cases of osteoid lipomas, and 96 cases of dermoid tumors. The two cases of osseous choristoma, one female and one male patient, presented with a mass in the superficial sclera and eyelid, respectively. The prevalence of osseous choristoma in our hospital was 0.676%. Similar results were observed in a study conducted by Aldossary MM et al[2], in which among the 120 patients with myoblastoma of the ophthalmic surface, two had osteogenic myoblastoma, with a prevalence of 1.7%. Among the osseous choristoma cases in this study, one case was observed in a young woman, and it presented as a hard mass on the upper left temporal quadrant, which was in accordance with the previous reviews. CT imaging showed a high-density shadow, which was considered to be a dermoid tumor or lipoma, and a low-density focal area. Preoperative CT can be used to determine the properties and adhesion degree of the mass and the depth of the lesion resection. The treatment for osseous choristoma involves observation and surgical resection, with the surgical indications being foreign body sensation, irritative symptoms, and recurrent inflammation. In the study patients, the lesions were closely adhered to the sclera with poor activity, and surgical resection was performed for diagnostic and esthetic purposes[4].

The limitation of this case is that there are only two cases of epibulbar osseous choristoma, and the characteristics of osseous choristoma are not well summarized. In addition, the patients were not followed after surgery, so the postoperative outcome of the disease is unclear. Reviewing the previous literature, there are no large samples or long-term follow-up cases, so we suggest that the future study of osseous choristoma should increase the sample size to make statistical description of the primary sites, pathological features, prognosis and other aspects, so as to provide a clear diagnosis and outcome of the disease. Of course, special cases also deserve our attention.