Pneumocephalus is a rare complication presenting in the postoperative period of a thoracoscopic operation. We report a case in which tension pneumocephalus occurred after thoracoscopic resection as well as the subsequent approach of surgical management.

A 66-year-old man who received thoracoscopic resection to remove an intrathoracic, posterior mediastinal, dumbbell-shaped, pathology-proven neurogenic tumor. The patient then reported experiencing progressively severe headaches, especially when in an upright position. A brain computed tomography scan at a local hospital disclosed extensive pneumocephalus. Revision surgery for resection of the pseudomeningocele and repair of the cerebrospinal fluid leakage was thus arranged for the patient. During the operation, we traced the cerebrospinal fluid leakage and found that it might have derived from incomplete endoscopic clipping around the tumor stump near the dural sac at the T3 level. After that, we wrapped and sealed all the possible origins of the leakage with autologous fat, tissue glue, gelfoam, and duraseal layer by layer. The patient recovered well, and the computed tomography images showed resolution of the pneumocephalus.

This report and literature review indicated that the risk of developing a tension pneumocephalus cannot be ignored and should be monitored carefully after thoracoscopic tumor resection.

Tension pneumocephalus (TP) is defined as the presence of air in the intracranial space, causing intracranial hypertension and a mass effect[1,2]. The clinical presentation of TP may include headache, nausea, vomiting, vertigo, aphasia, hemiparesis, altered levels of consciousness, and frontal lobe syndrome[1-4]. Because most symptoms associated with TP are non-specific, the diagnosis primarily depends on imaging findings. The formation of TP can be fatal if not diagnosed early and treated properly[5].

Spinal dumbbell tumors accounted for 17% to 22% of all spinal cord tumors according to previous reports[6,7] and are classified as epidural, intradural, or paravertebral depending on the locations involved[6]. Laminectomy with costotransversectomy has been presented as an effective method for the resection of thoracic dumbbell tumors involving large intraspinal and paraspinal regions[8,9]. Anterior approaches may also be feasible for the treatment of tumors that only involve the paraspinal region[10]. However, complications may develop after surgery, including pleural injury, bleeding, damage to the spinal cord, and cerebrospinal fluid leakage[8-10]. Few cases have been reported regarding the occurrence and management of pneumocephalus following the thoracoscopic resection of a neurogenic tumor[11,12]. We report a case in which TP developed after a thoracoscopic resection and describe the subsequent surgical management approach.

A 66-year-old man described suffering from severe headache and vomiting, which became exaggerated with postural changes, following treatment with thoracoscopic resection to remove a neurogenic tumor.

The symptoms appeared starting on the 7th postoperative day.

The patient was previously diagnosed with a thoracic spinal dumbbell tumor.

The patient was sent to our emergency department, where a neurological examination showed clear consciousness (Glasgow coma scale: E4V5M6) with drowsiness and disorientation, no cranial nerve abnormalities, and full muscle power in all four limbs. Preoperatively, the patient’s body temperature was 36.4 °C, blood pressure was 145/73 mmHg, heart rate was 90 bpm, and respiratory rate was 16 breaths per minute. The patient had normal heart and clear lungs sounds.

A brain computed tomography scan demonstrated TP and pneumoventricle with the air extending down into the intraspinal space, and the progression of TP was found 3 d after his admission to the intensive care unit (Figure 1). A magnetic resonance imaging scan of the thoracic spine disclosed a left T2/T3 pseudomeningocele with air-fluid level, while a chest computed tomography demonstrated pneumothorax and subcutaneous emphysema around the poorly healing previous thoracoscopic access wound (Figure 2). The thoracic spinal neurofibroma had been almost totally removed but was complicated with pneumothorax, cerebrospinal fluid (CSF) leakage, and TP. 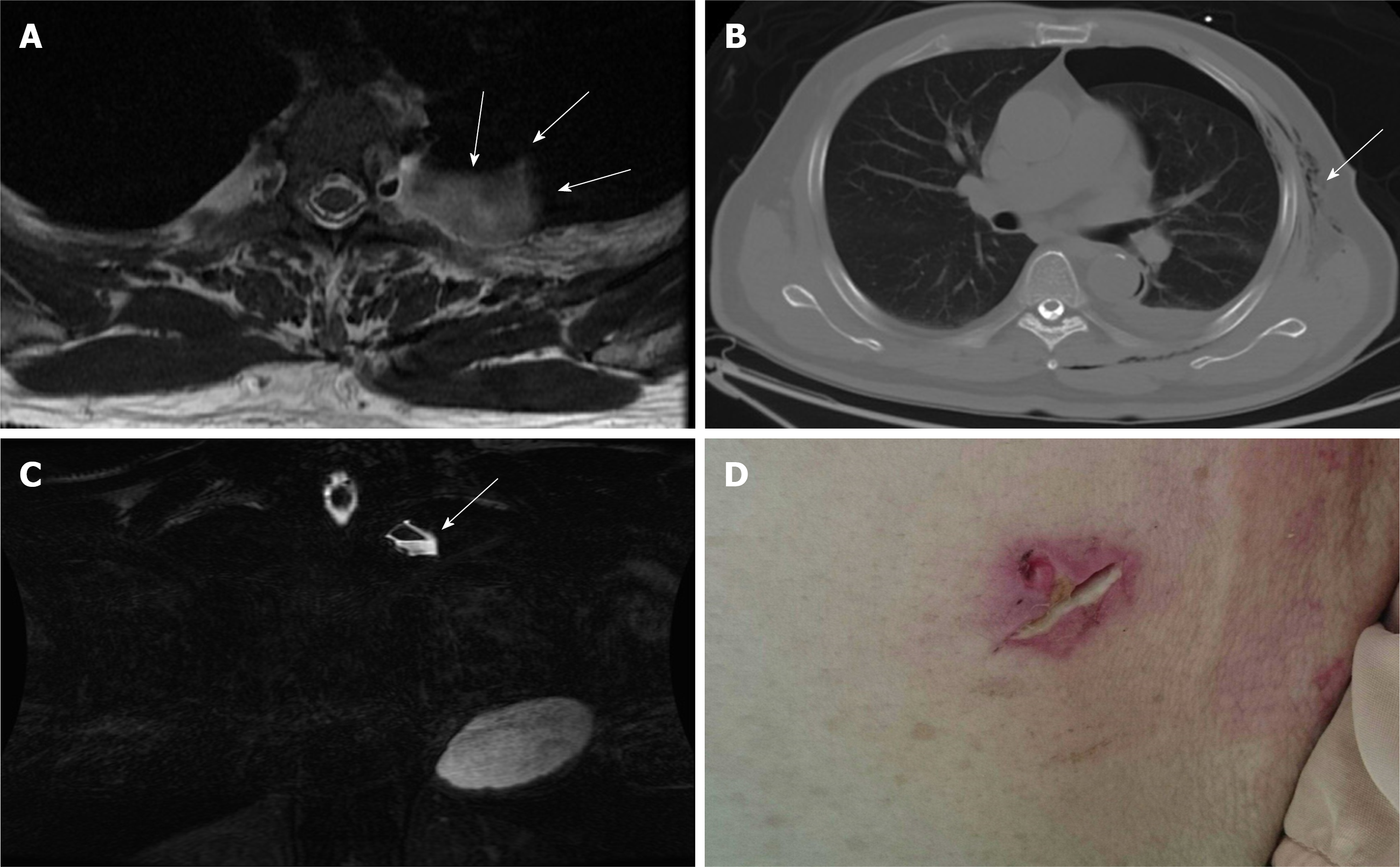 The tumor was pathologically proven to be a neurogenic tumor consisting of neurofibroma (Figure 3). According to the postoperative microscopic examination, the cyst contained chronic inflammation of tissue and no residual tumor. 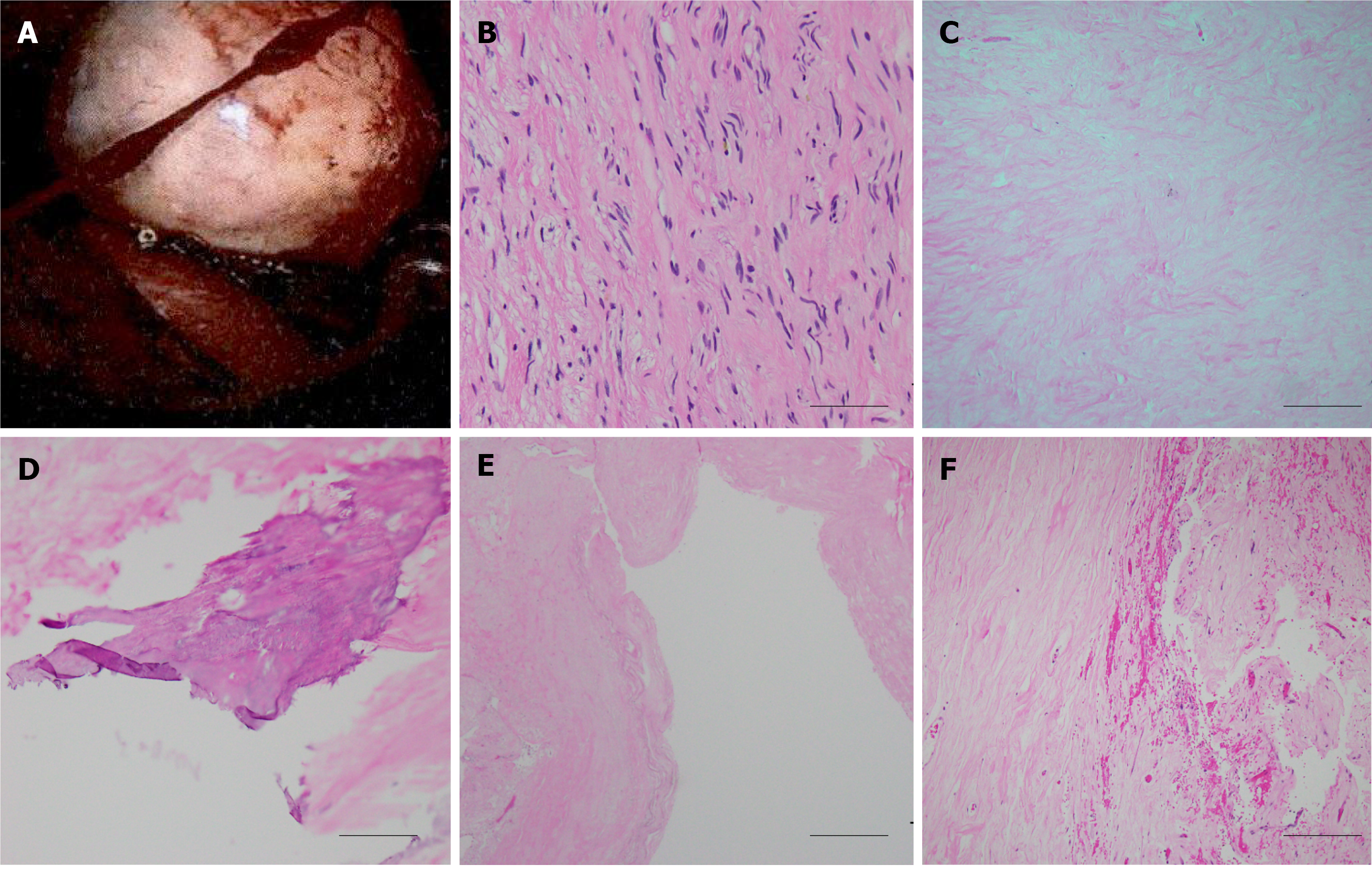 The presented case was diagnosed with tension pneumocephalus after a thoracoscopic resection to remove a neurogenic tumor.

He then was admitted to the intensive care unit for further close monitoring and medical treatments including full hydration, prophylactic antibiotics use, O2 supplementation, lying absolutely flat, and primary suturing and debridement of the chest wound. However, the symptoms did not improve. Thus, surgical treatments were performed to repair the CSF leakages. Following a left T2-3 hemilaminectomy and costotransversectomy, a cystic meningocele was found. After the cyst pouch was totally removed, the previous remnant tumor stump and surgical clip were explored meticulously. CSF leaking from the surgical clip near the dura was disclosed. The leakage site was wrapped with autologous fat, gelfoam, tissue glue, and duraseal in a layer-by-layer manner (Figure 4). Finally, the wound was closed in a layer-by-layer manner with a Jackson-Pratt tube that was left in the surgical field. 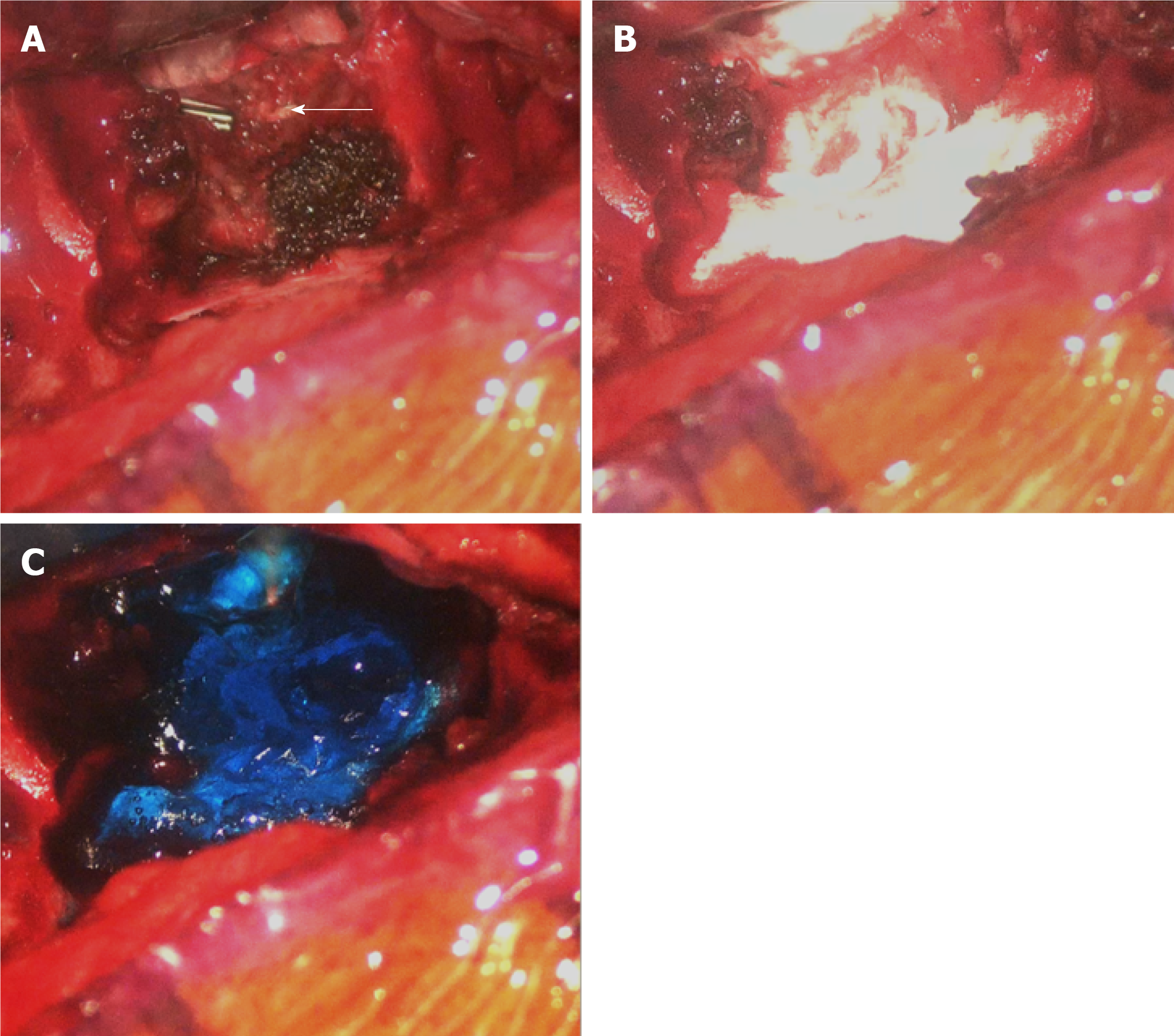 Figure 4 Intraoperative images of the surgical repair. A: Cerebrospinal fluid leakage might derive from the previous endoscopic clipped tumor stump near the dural sac of the T3 level (arrow); B-C: Repairing of the leakage sites with tissue glue, gelfoam, and dural seal.
OUTCOME AND FOLLOW-UP

At the 2-wk follow-up and evaluation, the patient denied experiencing any further headaches. The follow-up brain computed tomography scan showed resolution of the pneumocephalus, pneumoventricle, pneumothorax, and pneumospine (Figure 5). 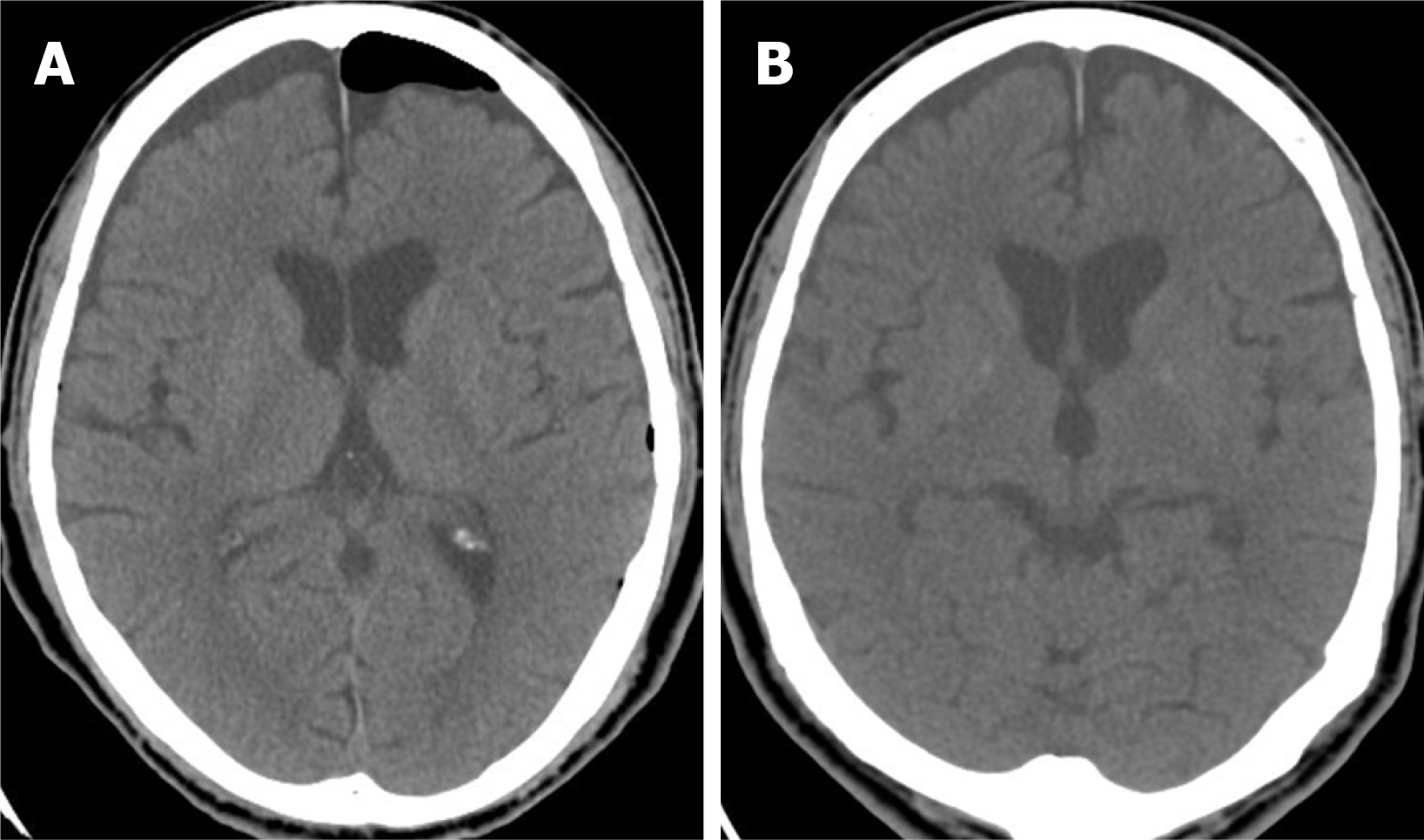 The reported theories of pneumocephalus development include the “ball-valve theory” and “inverted soda bottle effect”[13,14]. The possible mechanisms to develop pneumocephalus after thoracoscopic resection include dural tearing with persistent cerebrospinal fluid leakage, such that air can gain access from the leakage site to the intradural space and reach the cranial cavity. The negative pressure produced by chest tube suction can even deteriorate the CSF extravasation. On the other hand, an upright head position also allows the air to easily enter the intradural space from the leakage site. Relatedly, in our case, a poorly healing thoracoscopic access wound resulted in pneumothorax and an aggravating pneumocephalus. Based on the imaging results of the current case, TP was indicated by two imaging characteristics. One, the “Mt. Fuji sign,” means that subdural air with increased tension is separating and compressing the bilateral frontal lobes and widening the interhemispheric space, such that the resulting image resembles the silhouette of Mt. Fuji. The other, the “air bubble sign,” indicates that multiple air bubbles are scattered through the cistern, with these air bubbles putatively entering the subarachnoid space due to tearing of the arachnoid membrane caused by increased tension in the subdural space[2,3]. This appeared to apply in our case, with the source of intracranial air being a spinal dural defect that resulted in air also being apparent in the spinal cord, ventricle, and basal cistern[12].

We performed the literature review using a search of English literature from PubMed, in which the source of databases ranged from 2000 to 2019. The key words and criteria for search engine was represented as “pneumocephalus [title] AND spinal tumor” where 11 results were generated. We further summarized the reported cases in which pneumocephalus developed after surgical treatments for spinal or posterior mediastinal tumor and specified their subsequent interventions (Tables 1, 2). Though only 23 cases in which pneumocephalus developed after surgical treatments for spinal or posterior mediastinal tumor had been reported within the recent 10 years, most patients can be treated only by conservative medical therapeutic strategies, including highly concentrated O2 supplementation to accelerate the resorption of intracranial air, bed rest with the head laid flat to minimize CSF leakage from the dural defect, avoidance of the Valsalva maneuver, and prophylactic antibiotics use if meningitis is highly suspected (Tables 1, 2). Surgical intervention consisting of the evacuation of the intracranial air and repair of the dural defect is indicated when the above conservative treatments fail, when the recurrence of pneumocephalus occurs, or when there are signs of increasing intracranial pressure[1-4,12]. In our case for progressive pneumocephalus, we preferred to conduct surgical intervention rather than conservative treatment. The direct method of dura repair was chosen in consideration to the developing CSF fistula. Then, the intracranial air was evacuated until the CSF leakage site was sealed completely. Initial frontal burr hole decompression for pneumocephalus was demonstrated in a similar case for rapid consciousness change and cranial nerve palsy under the impression of increased intracranial pressure signs, of which the clinical signs were improved postoperatively[12]. In our opinion, the direct method for dural repair can obliterate the origin of CSF leakage and fistula formation. Thus, the pneumocephalus may be absorbed spontaneously as long as there is no further air getting access[15].

Intraoperative primary repair with suturing is highly recommended for preventing postoperative CSF leakage[16]. However, the primary closure of a durotomy may be difficult because of its location (e.g., in the case of ventral or far-lateral durotomies), a large dural defect, poor tensile strength of the dura, or a minimal invasive wound limiting the exposure and access[15]. Several alternative methods of durotomy repair have been described. For example, an additional dorsal durotomy for far-lateral or dorsal defects can allow such defects to be more easily visualized and plugged with autograft or suturing[15], while autograft coverage with dural sealant in cases of durotomies that cannot be repaired primarily due to limited visibility or access[15,17], an aneurysm clip, or a titanium clip have also been reported[18,19]. In our case, as the CSF leakage might have derived from the previous endoscopically clipped tumor stump near the dural sac at the T3 level, such that it would have been difficult to perform a primary suture repair. Thus, we plugged and wrapped the stump with an autograft of fat, tissue glue, gelfoam, and duraseal (Figure 4).

The risk of getting a pneumocephalus after thoracoscopic resection of a spinal tumor cannot be neglected since the intraoperative repair is hard to access. The direct approach for dural repair may be an attemptable way to eliminate the CSF leakages.