Breast cancer mainly occurs in young and premenopausal women; its incidence is increasing annually. Patients with triple-negative breast cancer (TNBC) have relatively high recurrence and transfer rates during the operation and 3 years after postoperative adjuvant chemotherapy. Currently, the treatment for patients with TNBC is mainly based on a comprehensive combination of surgery and chemotherapy. Therefore, identifying additional effective treatments to improve patient prognosis is important.

To explore and discuss the effects and prognostic factors of neoadjuvant chemotherapy in TNBC.

In total, 118 patients diagnosed with TNBC from January 2016 to January 2020 in our hospital were selected and divided into the observation (n = 60) and control groups according to therapeutic regimen. The control group received routine chemotherapy, and the observation group received neoadjuvant chemotherapy. The therapeutic effects of the two groups were observed, and the survival of patients was followed up.

Breast cancer has several types, and each subtype has different biological behaviors and clinicopathological and molecular characteristics. The corresponding treatment methods and prognoses of breast cancer are also different[1]. Triple-negative breast cancer (TNBC) is a type of breast cancer with no expression of estrogen receptor, progesterone receptor, and human epidermal growth factor receptor 2, and its incidence accounts for approximately one-fifth of the incidence of breast cancer[2]. TNBC has high morbidity and shows an upward trend annually. However, due to the lack of effective targeted endocrine therapy, only conventional treatment can be provided in clinical practice. However, the curative effect of conventional treatment is poor, and its local recurrence rate is high, which has become one of the areas of interest in breast cancer studies in recent years[3]. For the past few years, drugs (anthracyclines, taxanes) are often used for TNBC treatment in clinical settings, although the therapeutic regimen for TNBC remains unclear. Some patients are drug-resistant, which can influence the treatment effect[4]. Currently, neoadjuvant chemotherapy is one of the most ideal treatments for locally advanced breast cancer, which can effectively improve the overall efficacy for breast cancer[5]. According to a previous study[6], tumor markers are consistent with the biological characteristics of breast cancer, and cytokines can predict the occurrence and development of tumors and the prognosis of patients. Patients with TNBC in our hospital were selected to explore and discuss the effects and prognostic factors of neoadjuvant chemotherapy in TNBC.

A total of 118 patients with TNBC from January 2016 to January 2020 in our hospital were selected. The inclusion criteria were as follows: (1) Patients who were pathologically diagnosed with TNBC; (2) patients with tumor-node-metastasis (TNM) stages III–IV; (3) patients who were all first-treated; (4) female patients; and (5) patients or their family members who provided an informed consent. The exclusion criteria were as follows: (1) Patients with an estimated survival period of < 3 mo; (2) patients complicated with other systemic malignant tumors; (3) patients complicated with liver, kidney, and other important organ diseases and immune system diseases; (4) patients with mental illness; and (5) patients with incomplete clinical follow-up data. Patients were divided into the observation group (n = 60) and the control group (n = 58) according to therapeutic regimen.

Cancer antigen (CA) 125, CA19-9, and carcinoembryonic antigen (CEA) levels were detected using a Roche Cobas E601 automatic electrochemiluminescence immunoanalyzer, which was purchased from Roche. The next day before and after treatment, 5 mL of the patient’s fasting venous blood was collected and centrifuged at 3000 r/min for 5 min, and the serum was separated. Electrochemical luminescence automatic immunoanalyzer and corresponding reagents were used for detection. All operations were performed in strict accordance with the instructions to avoid hemolysis and contamination.

The monoclonal antibodies karyopherin A2 (KPNA2), protein 53, and KI-67 were purchased from Roche, and BenchMark ULTRA was used for immunohistochemical staining. The experimental procedures were performed according to the provided instructions. Known positive tissue was used as the positive control, and phosphate buffered saline was used instead of a primary antibody as the negative control. Organization immunohistochemical staining results were provided by two senior pathologists using the semi-quantitative method, according to the density of dyeing (negative = 0, weakly positive = 1, moderately positive = 2, strongly positive = 3) and the positive cell percentage (0: negative, 1: < 25%, 2: 25%-50%, 3: 51%-75%, 4: > 75%), and five high-power electric field immune response scores (IRSs) were calculated. The final results were as follows: negative (IRS = 0) (−); weakly positive (IRS = 1–4) (+); moderately positive (IRS = 5–8) (++); and strongly positive (IRS = 9–12) (+++).

The Statistical Package for the Social Sciences version 22.0 (IBM Corp., Armonk, NY, USA) was used for data analysis. Normally distributed data are expressed as mean ± SD, and t-tests were used for comparisons between groups. Counting data are expressed as n (%), and the χ2 test was used for comparisons between groups. Survival curves were analyzed using the Kaplan-Meier method. Cox proportional risk regression analysis was used for multiple factors. Spearman rank correlation analysis was used to assess correlation. Inspection level was set at an α level of 0.05.

Correlation between the expressions of KPNA2 and SOX2

Comparison of clinical data between the two groups

The clinical data of the two groups were compared (Table 4).

Comparison of short-term therapeutic effects between the two groups

The short-term therapeutic effects of the observation group were better than those of the control group (P < 0.05), and the total effective rate was 58.33% (Table 5).

Comparison of survival curves between the two groups 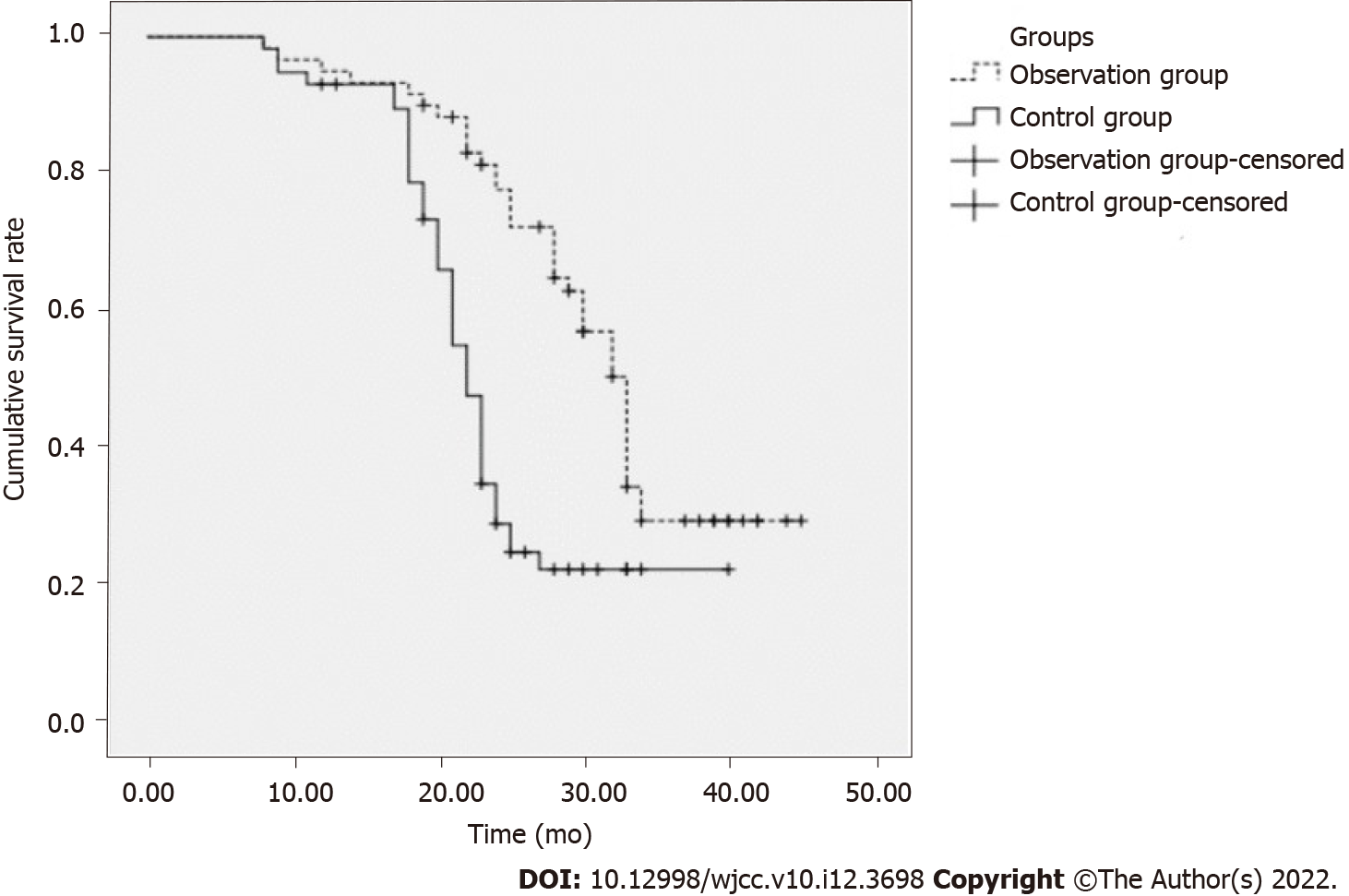 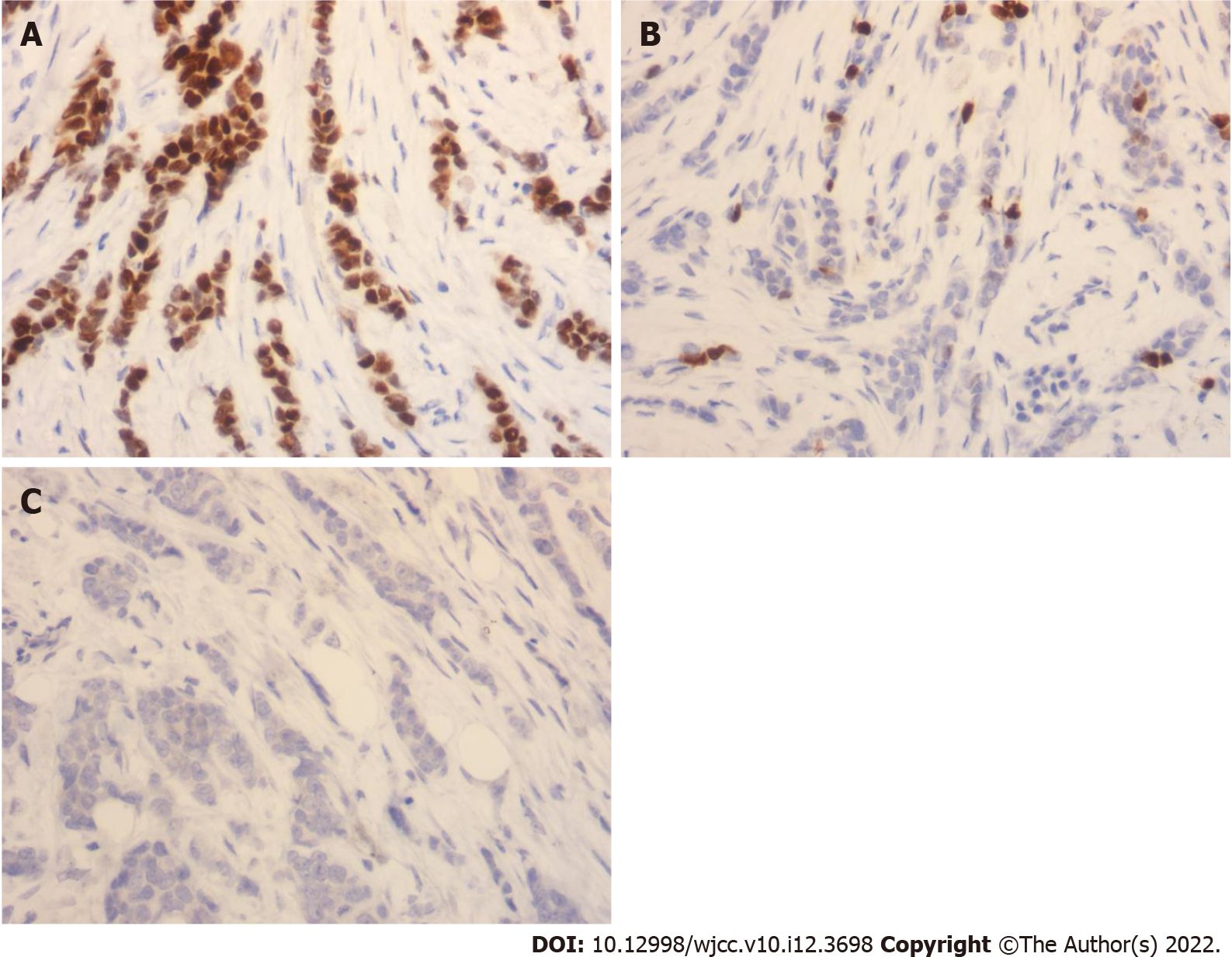 The ET regimen uses neoadjuvant chemotherapy before surgery, and its main target population is patients with locally advanced breast cancer[8-10]. The paclitaxel used in the regimen was a taxane antitumor drug, which can bind to free tubulin, accelerate the assembly speed of microtubules, inhibit the aggregation of microtubules, and effectively inhibit the growth of tumor cells[11]. The chemical composition of epirubicin, an anthracycline antitumor drug, is similar to that of adriacin, which plays an anticancer role mainly by inhibiting nucleic acid synthesis. The drug is inserted directly into the double strand of DNA, stopping the process of cell division and killing tumor cells. When used in combination, the two drugs have significant antitumor effects with few side effects[12].

According to the study results, the short-term curative effect of the observation group was significantly better than that of the control group, and the median survival time of the observation group was significantly longer than that of the control group (P < 0.05), indicating that the two chemotherapy regimens can all achieve good treatment effects, and the efficacy of the neoadjuvant chemotherapy regimen is relatively significant. The mechanisms of action of the two regimens are different. Cyclophosphamide mainly inhibits the proliferation of breast cancer cells by inhibiting the expression of the key protein pKAT in the PBK pathway. Neoadjuvant chemotherapy can control micrometastases in the body and effectively reduce the clinical stage of breast cancer. Paclitaxel binds specifically to specific parts of tubulin in cancer cells, preventing it from depolymerization, so that the division of cancer cells will always stay in the G2 and M phases, leading to the inability of the cancer cells to replicate and ultimately to the death of the cancer cells. Epirubicin can inhibit DNA replication and RNA synthesis, inhibit the division of cancer cells, and can affect the DNA superhelical DNA replication and transcription process by inhibiting topoisomerase II. It also chelates iron ions, producing free radicals that damage DNA, proteins, and cell membrane structures. KPNA2 is a member of the nuclear transport signal superfamily, transporting mRNA, DNA, and RNA polymerase and transcription factors into and out of the nucleus, thereby promoting cell proliferation and differentiation, and participating in cell development, apoptosis, migration, and DNA damage response.

Studies have shown that[13,14] tumor markers are closely related to the biological behavior of tumors, among which CEA, CA19-9, and CA125 are common. As a common type of hormone in humans, CA125 is a marker for ovarian cancer and can be highly expressed in breast cancer. CEA is elevated in advanced breast cancer, and CA19-9 can indicate the nature of the tumor. The combined detection of three tumor markers can improve the diagnosis rate of tumor, with high prognostic value, and the change level of cytokines after treatment is also of high value in predicting the prognosis of breast cancer[15-17]. In our study, CEA, CA19-9, and CA125 Levels in the observation and control groups after treatment were lower than those before treatment (P < 0.05). CEA, CA19-9, and CA125 Levels in the observation group after treatment were lower than those of the control group (P < 0.05), suggesting that neoadjuvant chemotherapy with the ET regimen can significantly reduce the levels of tumor markers and cytokines in patients with good therapeutic effect. According to the literature[18], patients with TNBC have the worst prognosis and a short survival time and are at risk of developing distant metastasis. Cox proportional risk regression analysis in this study showed that TNM stage, differentiation degree, lymph node metastasis, KPNA2 and SOX2 expressions, and treatment plan were prognostic factors of TNBC, which could be used as important indicators for clinical observation of efficacy and prognosis and may be related to the reduced sensitivity of tumor cells to chemotherapy drugs.

In the comprehensive treatment of breast cancer, neoadjuvant chemotherapy is no longer limited to breast preservation, staging surgery, and other advantages. It can evaluate the sensitivity of chemotherapy, realize personalized treatment, and develop targeted drugs[18-20]. There are many studies on the side effects of chemotherapy drugs, but few studies on the factors that affect the prognosis of patients after chemotherapy have been conducted. This study had certain reference value for clinical treatment. However, due to the short follow-up duration of this study and considering that influencing factors were not assessed in this study, larger multicenter study sample sizes to explore the clinicopathological characteristics and prognosis of elderly patients with TNBC are required in the future to develop a standard treatment plan for better prognosis.

Patients with triple-negative breast cancer (TNBC) have relatively high recurrence and transfer rates during the operation and 3 years after postoperative adjuvant chemotherapy.

This study aimed to explore and discuss the effects and prognostic factors of neoadjuvant chemotherapy in TNBC.

Next, we will investigate the mechanism of neoadjuvant chemotherapy for TNBC.