AIM: To investigate the utility of intestinal disaccharide analysis during esophagogastroduodenoscopy (EGD) in children, we performed a systematic review of studies examining disaccharide activity.

METHODS: All full-length articles published in English during 1966-2014 were included if: (1) participants had small intestinal biopsy evaluation of disaccharide activity; (2) levels of lactase, sucrase, maltase or palatinase were reported; and (3) age of participants was under 18 years.

Intestinal disaccharide analysis of duodenal biopsy specimens are often obtained during esophagogastroduodenoscopy (EGD) in children. Options for disaccharide evaluation include stool analysis, hydrogen breath tests, and sugar tolerance testing. However, the “gold-standard” to accomplish a diagnosis of disaccharide deficiency is a small intestinal biopsy and enzyme assay[1,2]. The four enzyme complexes commonly assessed for disaccharide hydrolysis (disaccharidases) are lactase, sucrase, maltase and palatinase. In pediatrics, disaccharide deficiency has a wide clinical presentation with symptoms possibly including diarrhea, bloating, flatulence, abdominal pain, borborygmi, and failure to thrive. Therefore, it can be challenging to select patients undergoing EGD to complete the additional disaccharide evaluation which generally requires at least two additional duodenal biopsy specimens.

Many clinical investigators have attempted to characterize the prevalence of disaccharide deficiency and explore disaccharide activity in select pediatric populations. However, for most children with non-specific symptoms, clinical guidelines do not clearly express indications for disaccharide measurement during diagnostic EGD. Clear indications for disaccharide analysis might include chronic diarrhea and failure to thrive of unclear etiology. However, in patients with other clinical features such as abdominal pain, bloating, or gastroesophageal reflux it is not clear when disaccharide analysis should be pursued. For example, the diagnosis of functional gastrointestinal disease usually is made without evaluations of disaccharide activity, although symptoms from carbohydrate intolerance can overlap.

We completed a systematic review of the medical literature to appraise the evidence regarding intestinal disaccharide activity reported in duodenal biopsy specimens from children undergoing EGD. We sought to review the effect of ethnicity, underlying conditions, presenting symptoms, histological findings, and region of origin on disaccharide activities in children. Finally, we searched for studies examining clinical outcomes (treatment changes, quality of life, impact on gastrointestinal symptoms, cost-effectiveness) following EGD with disaccharide analysis.

A query of the medical literature was performed for clinical studies examining subjects undergoing EGD with small intestinal biopsy evaluation of disaccharide activity using MEDLINE (1966-March 2014), EMBASE (1995-March 2014), and the Cochrane Database (March 2014). Manuscripts were identified with the Medical Subject Heading (MeSH) and free text terms Disaccharidases/analysis, Duodenum/enzymology, Disaccharidases/deficiency, Disaccharidases/metabolism, Intestinal Mucosa/enzymology (all MeSH heading and free text terms). PubMed was utilized to query MEDLINE and the limits were applied to restrict the search to manuscripts written in the English language and including subjects under 18 years. Bibliographies of manuscripts that met inclusion criteria were reviewed for pertinent articles (Figure 1). 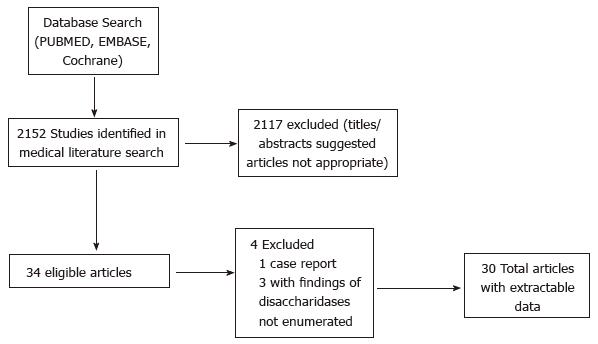 Manuscripts were chosen if they examined disaccharide levels after EGD in pediatric patients. The specific inclusion criteria for the studies were: (1) participants had small intestinal biopsy evaluation of disaccharide activity; (2) levels of lactase, sucrase, maltase or palatinase were reported; and (3) age of participants was under 18 years. The exclusion criteria were: (1) subjects over 18 years of age; and (2) omission of specific results (activity levels or deficiency) of disaccharide analysis of intestinal biopsy.

The specific data exported from each study included: The year and country of enrollment, sample size, ethnicity, underlying conditions, study design, presenting symptoms, disaccharide activity level, and histology reports. Included manuscripts were reviewed for examination of the following elements: (1) relationship of clinical symptoms with diagnostic yield; (2) relationship of the particulars regarding abdominal pain (severity, site) with specific pathology; (3) patient outcomes (quality of life, improvement of symptoms); or cost-effectiveness; and (4) patient-centered clinical outcomes (quality of life, symptom abatement), or cost-effectiveness. Several specific quality measures were searched for in each study: Whether (1) the participants were enrolled consecutively; (2) the clinical outcomes was measured precisely; and (3) confounding factors were recognized and adjusted for.

We computed prevalence estimates by combining data from studies that achieved the inclusion criteria and calculating sample-size - weighted mean values. We calculated pooled means for disaccharide levels using the weighted means equation. Our findings are included in tabular format.

Overall retrieval was 2152 manuscripts based on the search criteria described in the Methods (Figure 1). We reviewed all the titles and abstracts from the overall retrieval and 30 studies met both the inclusion and the exclusion criteria (Table 1, Table 2 and Table 3). The included articles were all observational or cohort studies and the majority were prospective (17). The studies were completed between 1966 and 2012. 77% of the studies (n = 23) occurred in European or American subjects. 11 studies examined Caucasian subjects, 3 studies examined Asian subjects, 6 examined African subjects, and one study examined Native Americans. Hispanic subjects were only included in one study which had only one Hispanic subject[3]. Only one study did not report histologic features of participating subjects[4]. The studies did not examined resource utilization, cost-effectiveness, or quality of life related to disaccharide analysis after EGD. The biggest study included about 30000 endoscopies and 10 studies included fewer than 100 endoscopies.

The largest study reported findings in 30314 samples received over a 5 year period in a reference laboratory[4]. This study found that the most common deficiency was lactase occurring in 8963 (32%), followed by pandisaccharide deficiency in 2347 (8%). Congential sucrose-isomaltase deficiency was extremely rare, occurring in just 0.1% of the samples.

Only one study examined management changes as a result of intestinal disaccharide analysis[9]. Gupta et al[9] conducted a questionnaire to evaluate the usefulness of diet changes in patients with lactase deficiency and found that 81.5% (22/27) of patients responded to dietary modification.

Our systematic review of 30 studies of intestinal disaccharide analysis, including over 30000 samples, found that lactase deficiency was most common (39.2%), followed by maltase deficiency (12.6%), palatinase deficiency (9.1%), and sucrase deficiency (9.0%). Histopathology was reported in most studies and the primary findings included duodenal inflammation (6% to 24%) or villious atropy (9% to 100%). A large multi-center study including 30314 disaccharide analysis was performed in 2012, however, this study did not include information on the underlying conditions, histology, or ethnicity of its subjects.

In the articles reviewed, many did not specifically enumerate the indication or underlying condition for the EGD with disaccharide analysis. The most common conditions examined included celiac disease, chronic diarrhea, and malnutrition. In clinical practice, chronic diarrhea and malnutrition are common indications for disaccharide analysis. However, generally enzyme levels are not routinely measured in patients with celiac disease, as intestinal function usually normalizes with a gluten free diet. The most common indications for EGD in children include abdominal pain, vomiting, and reflux symptoms[31,32]. However, subjects with abdominal pain, reflux symptoms or vomiting were specifically examined in just 2 studies. Karnsakul et al[3] examined 33 children with abdominal pain, 11 with vomiting, and with reflux. Overall, half of all enrolled children had low activity of one or more disaccharidases[3]. The study also found that vomiting was related to low lactase, but no other associations between symptoms and disaccharide levels were found. Prasad et al[16] enrolled 29 children with GERD symptoms and found normal disaccharide levels in this small cohort. Four remaining studies include patients with abdominal pain, vomiting, and reflux but did not specifically analyze the relationship between disaccharide activity and these indications for EGD.

The majority of studies (29/30) included analysis of histopathology. Histology is critical to examine because it can be a factor leading to differentiation of primary from secondary disaccharidase deficiencies. The majority of studies (12/16) examining the association between enzyme levels and histopathology found that inflammatory changes were associated with enzyme deficiencies. It has been argued that specimens should be considered unsatisfactory when all the enzymes assayed are low and the histology appears normal. However, four studies included in this review reported no clear association between histopathology findings and disaccharide activity. Additionally, data in adult patients suggests that the disaccharidase deficiency is not confined to patients with abnormal histology[33]. Therefore, we conclude that although enzymes levels are lower in the majority of patients with duodenal inflammation, enzyme levels may be affected even with normal histopathology.

While ethnicity was reported in many studies, only three studies compared disaccharide activity between ethnic cohorts. The primary finding was lower levels of disacharidase activity in children of African descent[27,28]. Although current studies includes over 30000 biopsy specimens, only 1 Hispanic subject was included.

Change in clinical management after EGD with disaccharide analysis was reported only in relation to dietary treatment low lactase levels. No studies explored management changes after the discovery of low sucrase, maltase or palatinase. Studies also did not report on the use of enzyme or dietary supplements.

Our review is limited somewhat by the heterogeneity and variability of the included studies. Our review of the current evidence also did not contain any clinical trials, and included primarily observational studies.

In summary, the present medical literature examining the utility of disaccharide analysis during EGD for children is limited primarily by inadequate investigation of clinical presentation to disaccharide levels. The prevalence and outcomes of disaccharide deficiency in pediatric patients with abdominal pain, reflux, vomiting has not been well-studied. Also, the majority of clinical outcomes after EGD with disaccharide analysis (e.g., patient management impact, quality of life improvement, symptom abatement, cost) are not well described in the current literature. Prior studies do not sufficiently include Hispanic subjects. However, our findings may have applicability to routine clinical practice. We recommend large studies examining the association between clinical factors and disaccharide levels with detailed elucidation of histopathology reports to illuminate the utility of disaccharide analysis in children undergoing EGD. Further investigation should include a large sample size and explore the value of specific management options after low disaccharide levels are discovered by small intestinal biopsies.

For children with non-specific symptoms, clinical guidelines and current data do not clearly express indications for disaccharide measurement during diagnostic esophagogastroduodenoscopy (EGD).

This study is the first to compile the medical literature examining the utility of disaccharide analysis during EGD for children and reveal significant gaps in the current clinical data on this subject.

This review directs future investigations to include a large sample size and explore the value of specific management options after low disaccharide levels are discovered by small intestinal biopsies.

Disaccharide: Class of sugars, such as maltose, lactose, and sucrose, having two linked monosaccharide units per molecule; EGD: Test to examine the lining of the esophagus, stomach, and first part of the small intestine.

The report describes the usefulness of disaccharide analysis from children undergoing EGD. The quality of manuscript is very good.