We present a case of tubercular arthritis who underwent numerous unnecessary investigations what is known as “victims of modern imaging technology” or VOMIT. Today there is an exponential rise in the volume of the medical imaging, part of which is contributed by unnecessary and unjustified indications. We discuss about the untoward effects of the uninhibited and careless use of modern imaging modalities and possible ways to avoid. Skeletal manifestation of the tuberculosis is still common in the endemic countries like India. Although the final diagnosis of the skeletal tuberculosis like tubercular arthritis is made by bacteriological and histological studies, few demographic, clinical and radiological features might help making early diagnosis.

Core tip: The primary objective is to highlight the possible consequences of the irrational use of imaging investigations. In this case report, we want to explain about an anxious patient undergoing some myriad investigations for an uncommon presentation of common presentations. It is important to optimally use available resources with improved communication with referring physicians and increasing the awareness regarding the utility and indications for various imaging.

With modern medical imaging boom and exponential rise of its volume as well as with increasing accuracy from these imaging, it is small wonder that the examples of victims of modern imaging technology or VOMIT are on the rise[1,2]. While radiology and imaging are influencing patient management and treatment decisions like never before, unscrupulous and careless use of newer imaging techniques is detrimental to the patient’s as well as hospital’s resources and, contributes significantly to patient’s anxiety if a grave diagnosis is mistakenly made.

Skeletal tuberculosis is uncommon in third world countries with Appendicular joint affectation being uncommon than spinal tuberculosis[3]. The few cases of distal small joint affectations are all prior to 1980[4]. Two cases of tubercular arthritis mimicking neoplasm have been reported[5]. However, there is no case reported of carcinomatous arthropathy of the first metacarpophalangeal joint[6]. As an example of VOMIT in the modern era, we wish to highlight a rare case of tubercular arthritis of the first metacarpophalangeal joint masquerading as skeletal metastasis, which demonstrates the ill-effects of unwarranted excessive medical imaging.

A 40-year-old male presented with pain and swelling of the left thumb in the past 1 mo along with vague bone and joint pains and associated swelling in the neck. Clinical evaluation for the midline neck swelling revealed an indeterminate heteroechoic 15 mm thyroid lesion on sonography (Figure 1). His routine blood investigations and serum biochemistry were normal. The radiograph of his left thumb revealed destruction of the left first metacarpophalangeal joint. A Tc-99m pertechnate thyroid scan showed focal low-grade uptake in the thyroid in the same location. Assuming this thyroid lesion as a primary carcinoma and the thumb lesion as metastatic, the patient was advised a fluoride-18 bone scan for the multiple vague bone and joint pains that showed a focus of intense tracer uptake at the left first metacarpophalangeal joint accompanied by varying degrees of uptake at multiple sites in the appendicular and axial skeleton. The patient was thus referred to our tertiary cancer institute for further management. 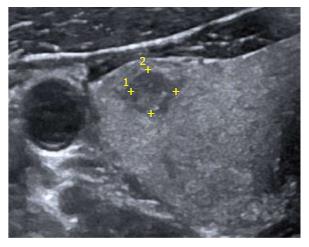 Figure 1 High resolution ultrasonography of the neck reveals a well-defined heteroechoic lesion in the right lobe of thyroid gland which appeared indeterminate on imaging (TIRADS 4B).

Our Head and Neck Surgical Oncology OPD advised sonography-guided thyroid FNAC that was reported as benign colloid goiter (Bethesda category II). The CT-guided biopsy of hand lesion (Figure 2) reported necrotic tissue with calcification and reparative changes, along with few lymphoid cells and, suggested evaluation for any parathyroid pathology. On sonography, the parathyroids were normal and he had normal levels of rheumatoid factor, serum uric acid, and parathormone levels. ESR was marginally elevated (42 mm/h).

An FDG positron emission tomography- computed tomography (PET-CT) was performed to confirm/rule out malignancy, which revealed a lytic destructive lesion of the first metacarpophalangeal joint with a soft tissue component, having a maximum standardized uptake value (SUV) of 17.2. No uptake was noted elsewhere in the appendicular or axial skeleton. The lung images showed diffuse ground glass opacities with multiple subcentimeter sized soft tissue density nodules, fibrotic changes and calcified granulomas in both the lungs (Figure 3). Considering the patient’s demographic and clinical background these were most likely suggestive of active pulmonary tuberculosis. 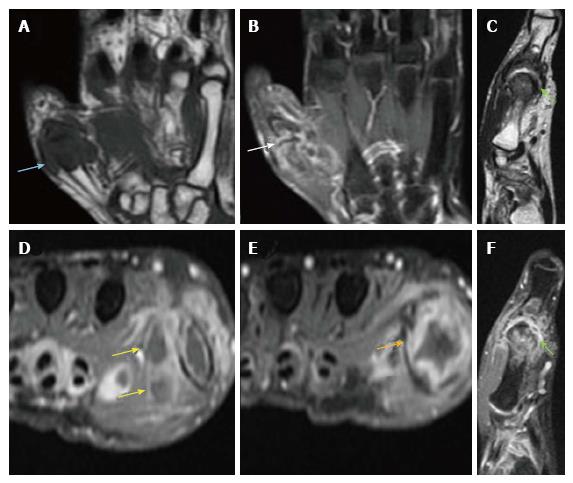 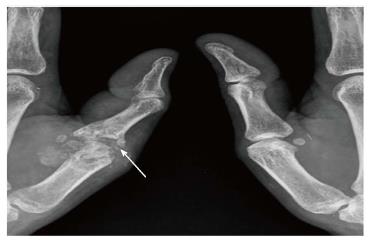 Figure 5 Radiograph of left thumb shows destruction of left first metacarpophalangeal joint with juxta-articular osteopenia and foci of calcification. In view of this appearance gout was also considered in the differential. However in view of normal serum uric acid levels, infective arthropathy was the most likely diagnosis.

A pathology review of the CT guided biopsy sample was asked with real time polymerase chain reaction (RT-PCR). This test revealed evidence of mycobacterium tuberculosis within the biopsy sample, thus establishing the diagnosis of tubercular arthritis of the left first metacarpophalangeal joint.

At the end of all these diagnostic investigations which included radiological, biochemical and histological tests, patient spent a significant amount of money and time. He also paid for travel expenses and registration and consultation charges in various hospitals. Added to this he must have underwent metal turmoil of anxiety and frustration. Not only these were costing him, there was waste of resources and time of hospitals/country which might have be used for patient in need.

It’s been a while that the concept of VOMIT was put forth to prevent patients from needless diagnostic costs and mental anguish after being put through a battery of expensive and misdirected imaging tests[1,2]. Still cases such as these are routinely found in clinical practice; the primary reason is our inability to discern pertinent data from the flood of information provided by myriad new imaging studies.

In this century and in endemic countries like India, primary bone tuberculosis not as common; spine and large joint affectations are seen, but those of small joints infrequent[3,4]. The mean age of presentation is 20 to 40 years and presenting with pain and swelling of affected joint; mostly metacarpal of the little finger[7]. Radiologically, the key to diagnosis is the Phemister’s triad that includes juxta-articular osteopenia, subarticular erosions and joint space narrowing, with or without soft tissue component[2]. Key magnetic resonance imaging (MRI) features include synovitis, joint effusion, subarticular erosions, active and chronic pannus, abscesses, hypo-intense synovium and bone chips[8].

The final diagnosis of tuberculous arthritis is based on bacteriology and histological studies. The differential diagnosis of tuberculous arthritis includes gout, sarcoidosis, osteomyelitis and tumors[9]. Inflammatory and infective lesions may show high grade FDG uptake, and every lesion which demonstrates high SUV should not be labeled as a malignancy[10]. Metastatic arthropathy is a rare occurrence with only a handful of cases reported in the literature[5,6]. For joint disease in patients with a known primary, other etiologies should always be considered first in the differential diagnosis.

To conclude, radiologists should improve communication with referring physicians and increase their awareness regarding the utility and indications for various imaging tests[11]. Radiologists should also themselves act as true imaging gatekeepers, preventing unnecessary overuse of imaging and striving to overcome commoditization of imaging modalities[12].

It is always worth to follow protocol in certain conditions, which are made for standardization, streamlining the workflow, increase the accuracy as well better communication among clinicians and radiologist. A good example for a well-accepted protocol is Breast Imaging Reporting and Data System (BIRADS). At times a radiologist giving a BIRADS category of 3, he might be more than 98% accurate in diagnosis (BIRADS category 3 translates to “probably benign”. The likelihood of malignancy is 0%-2%). To address this small portion of likelihood of malignancy, it is advised to have a short interval follow up, rather than further investigations to confirm the benignity.

A referring clinician needs to know what imaging study is suitable to ascertain a particular condition. An open and free discussion with the radiologist regarding patient disease condition, availability of imaging resources, benefits and limitation of diagnostic modality should be encouraged.

There is a need for setting objective benchmarks for missed diagnoses in the field of radiology. There must be greater knowledge sharing, targeted instruction and team-working among various clinical fields.

A case of tubercular arthritis who underwent a number of investigations in suspicion of malignancy, each one adding to the confusion rather than helping in arriving diagnosis.

Skeletal tuberculosis including arthritis are treated with 9-12 mo of anti-tubercular drug regimen.

Following standardized guidelines reduces the errors in diagnostic and treatment workflow. While making of provisional diagnosis, a radiologist should think of common disease over uncommon diseases. A free and open discussion among clinicians, radiologists and pathologists should be encouraged.