We retrospectively analyzed the short- and long-term outcomes of proven pT4 colorectal cancer patients who underwent complete resection by laparoscopic or open surgery from 2006 to 2015 at Guangdong General Hospital.

Laparoscopy is safely used in the treatment of pT4 colorectal cancer while offering advantages of minimal invasiveness and faster recovery. Laparoscopy is able to achieve good oncologic outcomes similar to those of open surgery. We recommend that laparoscopy be carried out in experienced centers. It is still required to screen the appropriate cases for laparoscopic surgery, optimize the preoperative diagnosis process, and reduce the conversion rate. Multi-center, prospective, and large-sample studies are required to assess these issues.

All pT4 colorectal cancer patients treated at Guangdong General Hospital from 2006 to 2015 were enrolled in this study. All patients were staged according to the AJCC 7th edition manual for colorectal cancer. The inclusion criteria included the following: (1) age of 18-75 years; (2) proven T4 pathology; and (3) radical surgery (D3 lymph node dissection). The exclusion criteria included the following: (1) low rectal cancer (peritoneal reflection as the boundary); (2) preoperative neoadjuvant treatment; (3) non-neoplastic deaths; and (4) palliative resection.

Preoperative computed tomography (CT) and magnetic resonance imaging were used to determine the preoperative clinical stage. The decision to proceed with laparoscopy or open surgery was made for all subjects on a patient-by-patient basis following multidisciplinary discussions and meetings. All cases entailed surgical resection according to the Japanese Society for Cancer of the Colon and Rectum (JSCCR) guidelines[9], which have the following requirements: D3 lymph node dissection (Figure 1) to ensure the appropriate resection length, and ensuring that the integrity of the mesorectum and intraoperative operations follow the principle of “no touch” (sharp separation, blood vessels first, tumor isolation, etc.). According to tumor location, the method of resection included the following: total colectomy, right colectomy, extended right colectomy, transverse colectomy, left colectomy, sigmoid colectomy, mid/upper anterior resection, and combined organ resection. Laparoscopic incision should not exceed 6 cm. The conversion cases were analyzed in the open surgery (OPEN) group. 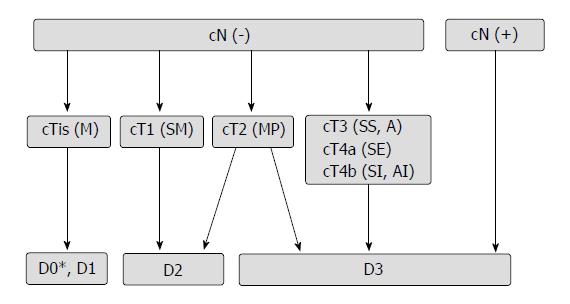 Figure 1 Flowchart for selection of the extent of lymph node dissection (from reference 9).
Observation indexes

All patients were postoperatively referred to the 7th AJCC/UICC TNM stage for adjuvant chemotherapy. All patients were followed through outpatient visits. According to the NCCN guidelines, patients were subjected to a 5-year surveillance program consisting of physical examinations and tumor marker (CEA and CA19-9) analysis every 3 mo up to 2 years. Every 6 mo, patients had complete colonoscopies at one and three years after surgery. Thoracic and abdominal CT scans were planned every year for five years of surveillance.

Statistical analyses were performed using SPSS 19.0. Quantitative data are reported as the mean ± SD or median. Categorical data were compared by χ2 tests or Fisher’s exact test. Survival curves [overall survival (OS) and disease-free survival (DFS)] were derived from Kaplan-Meier estimates, and the curves were compared by the log-rank test. Prognostic factors were identified by univariate analysis and further tested by multivariate analysis. The results are reported as a hazard ratio (HR) with 95%CI. A P-value < 0.05 was considered statistically significant.

During the period from 2006 to 2015, we collected a total of 211 pT4a/bN0-2M0 cases according to enrollment criteria from 2308 cases of colorectal cancer at the Department of General Surgery of Guangdong General Hospital. There were 101 cases in the laparoscopy (LAP) group and 111 cases in the OPEN group (Figure 2). 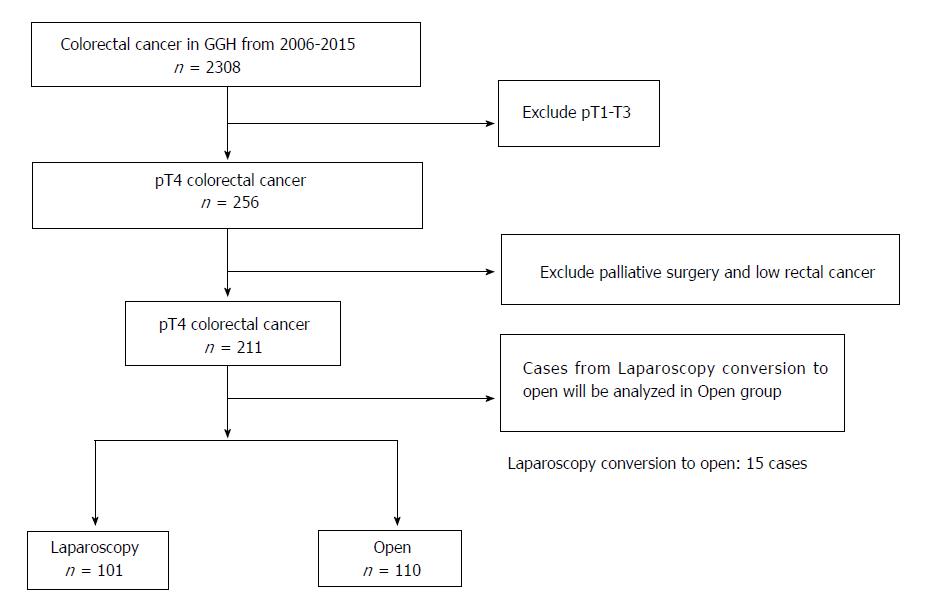 There were no significant differences in age, gender, BMI, ASA score, tumor location, hemoglobin, CA19-9, or CEA between the two groups (P > 0.05) (Table 1).

Regarding pathologic outcomes, no significant differences in the number of lymph nodes dissected, lymph node status, margin, pN stage, pTNM stage, Dukes stage, histological subtype, differentiation, or HER2 status were detected when comparing the two groups (P > 0.05). There were 21 pT4b cases in the OPEN group but only five cases in the LAP group; a comparison between the two groups in the pT stage revealed a statistically significant difference (P = 0.021) (Table 3).

With regard to postoperative recovery indexes, the LAP group was significantly better than the OPEN group (P < 0.05) in time to flatus, diet, and ambulation. The median hospital stay was 7 (5-21) d for the LAP group and 15 (7-31) d for the OPEN group, which showed a statistically significant difference between the two groups (P = 0.004) (Table 4). 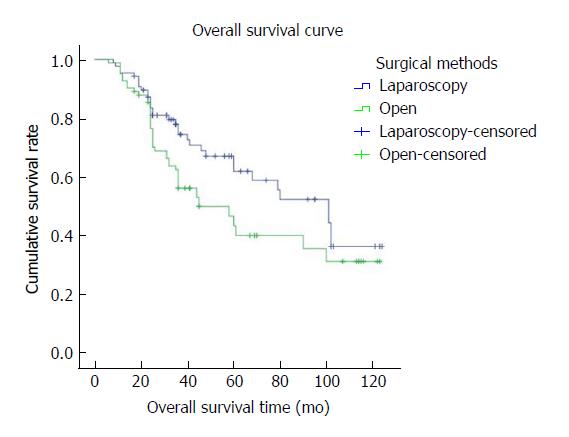 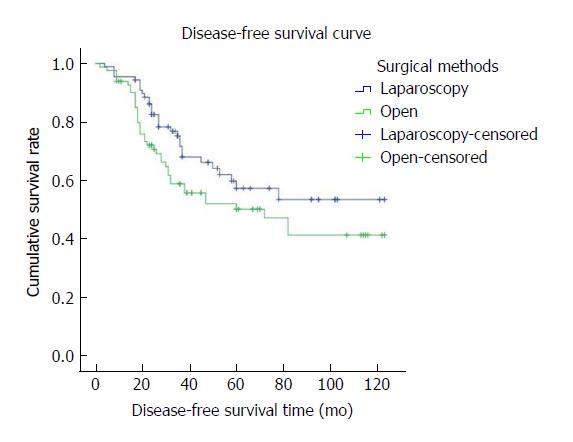 This study decided whether laparoscopic or open surgery should be performed based on the results of preoperative imaging examination and the patient’s condition; the main referenced indicators included the following: tumor location, tumor size, and the scope of invaded organ[21]. We found a statistically significant difference in the postoperative pT stage between the two groups (P = 0.021), with 21 cases of pT4b in the OPEN group. An examination of postoperative surgical outcomes (Table 2) revealed 21 cases of combined organ resection in the OPEN group, with the most commonly invaded organs including the small intestine, gynecological organs, and duodenum; in contrast, the LAP group had only five cases, and the number of cases of combined organ resection was thus significantly different for the two groups (P = 0.001), which is consistent with the results of previous studies[22,23]. These data also demonstrate that T4b stage may be an important consideration for surgeons to select laparoscopic or open surgery because it is very difficult to achieve the goal of complete resection using the “no touch” principle; therefore, guidelines do not recommend laparoscopic resection in T4 colorectal cancer[8]. However, such considerations lead to selective bias in the study, which is one of the limitations in both this study and a retrospective study.

In this study, the LAP group had longer operative time (210.8 ± 88.9 min vs 173.5 ± 72.7 min, P = 0.028), which may be related to the lack of experience and the difficulty of this surgery[19]. The resection length (19.5 ± 10.4 cm) obtained in the OPEN group was significantly better (P = 0.046). The literature shows that the incidence of postoperative complications associated with laparoscopic surgery was clearly lower than that associated with open surgery[31]. In this study, the rate of postoperative complication within 30 d in the LAP group was 12.9% (12/101), which was lower than 31.8% (35/110) in the OPEN group, and the most common complications in the OPEN group were infection (incision and abdomen) and disruption of incision, similar to a previous report in the literature[32]. Therefore, attention should be paid to intraoperative sterile principles and the suture of incision.

With regard to postoperative recovery outcomes, the LAP group had clear advantages in time to flatus (P = 0.037), diet (P = 0.003), and ambulation (P = 0.027) and hospital stays (P = 0.004) compared with the OPEN group (Table 4). Laparoscopy has the advantages of minimal invasion and fast recovery, which is in agreement with many earlier clinical studies[12,15,16].

In colorectal cancer surgery, lymph node dissection and R0 resection are important factors affecting long-term survival[33]. We performed D3 lymphadenectomy (parenteral lymph node -middle lymph node-central lymph node)[34] according to the guidelines recommended by the JSCCR. Previous studies have shown that laparoscopic treatment of colorectal cancer achieved an R0 resection rate between 80.8% and 98%[11,16,18]. In this study, the percentage of cases with the number of lymph nodes dissected greater than 12 was 75.2% (76/101) in the LAP group and 65.5% (72/110) in the OPEN group, and the difference was not significantly different (P = 0.134). Concurrently, the R0 resection rate in the LAP group was 98% (99/101), whereas in the OPEN group, it was 97.3% (107/110), which was not significantly different (P = 0.779). Thus, we believe that laparoscopic treatment in pT4 colorectal cancer can achieve similar oncological outcomes to open surgery. Finally, no differences in the 3- and 5-year OS rates (P = 0.060) and in 3- and 5-year DFS rates (P = 0.053) were observed when comparing the two groups, suggesting that laparoscopy may be a valid and effective tool to treat pT4 colorectal cancer without jeopardizing oncologic results, in accordance with the previously reported series. Multivariate analysis in our series detected IIIB/IIIC stage, lymph node status, and CA19-9 as independent predictors of OS, and pT4a/b, IIIC stage, CA19-9, and adjuvant chemotherapy as independent predictors of DFS.

In conclusion, laparoscopic surgery may be safe and acceptable in the treatment of pathologic T4 colorectal cancer patients with fast recovery outcomes and oncologic outcomes compared with open surgery. Thus, laparoscopy should not be regarded as an absolute contraindication in the management of pT4 colorectal cancer. Finally, as this study is only a retrospective study in a single center with a small sample size, the results need to be confirmed by prospective, multi-center and large sample clinical studies.

Laparoscopy has been widely used in the treatment of colorectal cancer and it has achieved a good radical effect in oncology. However, for the current clinical guidelines, laparoscopic surgery is not recommended in T4 colorectal cancer.

We aimed to analyze the short- and long-term outcomes of proven pathological T4 colorectal cancer patients who underwent complete resection by laparoscopic or open surgery.

We collected and analyzed the data of pT4 colorectal cancer cases at Guangdong General Hospital from 2006 to 2015. All patients were staged according to the AJCC 7th edition manual for colorectal cancer. We compared the laparoscopy (LAP) group and open (OPEN) group in clinical information, surgical and pathological outcomes, postoperative recovery outcomes, and survival.

Laparoscopic surgery may be safe and acceptable in the treatment of pathologic T4 colorectal cancer patients with fast recovery outcomes and oncologic outcomes compared with open surgery. We recommend that it can be carried out in experienced centers. It is required to screen the appropriate cases for laparoscopic surgery, optimize the preoperative diagnosis process, and reduce the conversion rate.

Although our study shows that laparoscopy is able to achieve good clinicopathological and oncologic outcomes similar to those of open surgery, this study is only a retrospective study in a single center with a small sample, and the results need to be confirmed by prospective, multi-center and large sample clinical studies.