A 71-year-old Japanese man with acute cholecystitis and an incarcerated gallbladder (GB) stone was admitted. Plain ultrasonography (US) incidentally detected a mass-like lesion in the fundus. Doppler US revealed that this elevated lesion had no blood flow. Computed tomography showed a relatively low-density mass, measuring 5 cm x 4 cm in diameter, with no positive enhancement. Magnetic resonance imaging showed a mass in the fundus with a slightly low intensity on T1-weighted images and a slightly high intensity on T2-weighted images. We were agonized in making the qualitative diagnosis of mass-like lesions of the fundus, such as a benign tumor, cancer, or debris. We performed laparoscopic cholecystectomy, because the incarcerated GB stone clearly caused acute cholecystitis. Intra-operative cholangiography clearly revealed pancreaticobiliary maljunction. Amylase levels in the common bile duct and gallbladder were quite high. The elevated lesion in the fundus clearly showed severe necrosis. Although this necrotic nodule included non-viable adenocarcinoma cells, viable cancer cell nests were located in the muscularis propria and subcutaneous layer. Histopathological examination confirmed a solid adenocarcinoma. Thus, we diagnosed it as a gallbladder cancer, based on histopathological analysis of the resected specimen. We therefore undertook radical surgery, including wedge resection of the liver, radical dissection of regional lymph nodes, and resection of the extrahepatic bile duct. Histopathological findings revealed no cancer, hyperplasia or dysplasia in the additionally resected specimens. The patient was finally staged as T2, N0, H0, P0, M(-), stage II. We present the first case of spontaneous necrosis of solid gallbladder adenocarcinoma, with a review of previous studies. 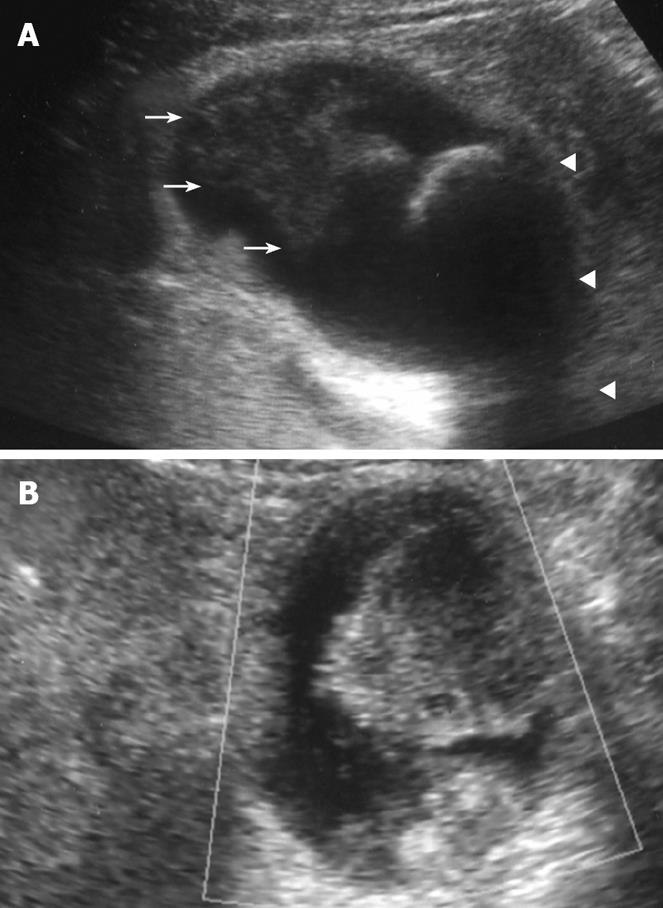 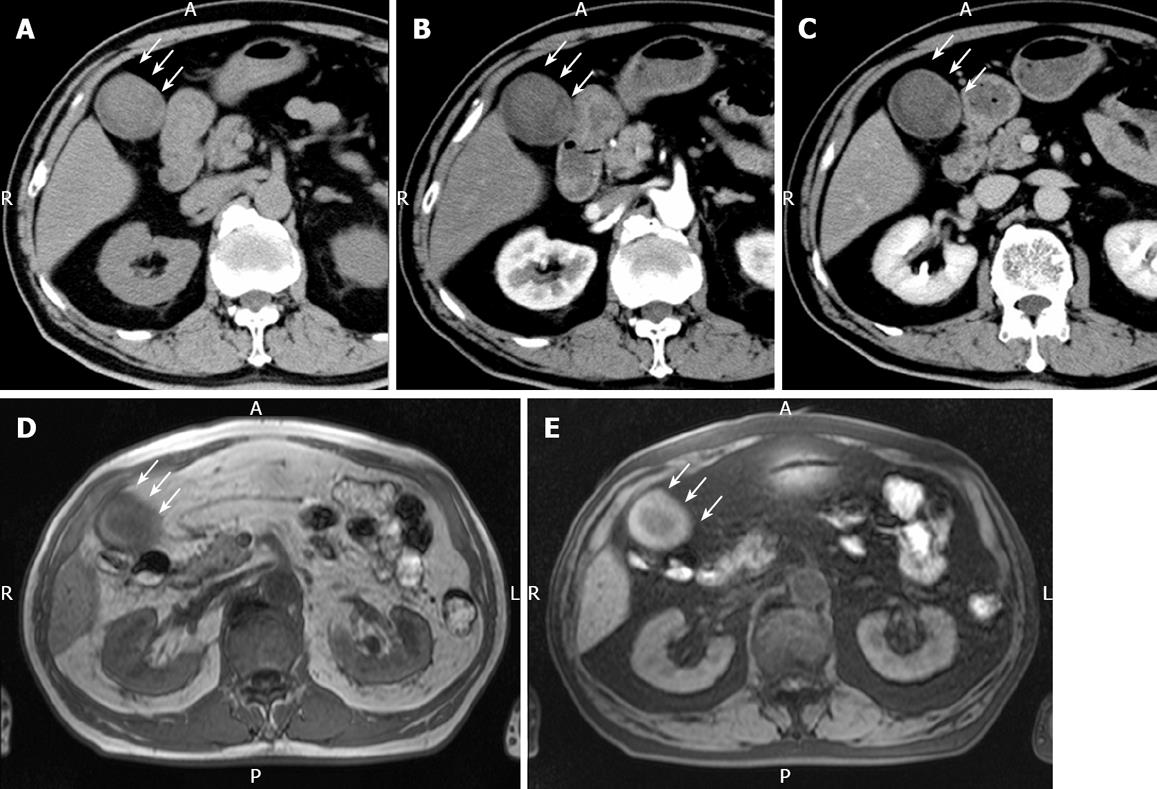 Figure 2 Plain CT. (A) showing a relatively low-density mass of the fundus measuring 5 cm x 4 cm in diameter, contrast-enhanced CT revealing no positive enhancement of this mass-like lesion in its early (B) and late (C) phases, MRI showing a mass in the fundus with a slightly low intensity on T1-weighted images (D) and a slightly high intensity on T2-weighted images (E). White arrow represents the mass-like lesion of the fundus. 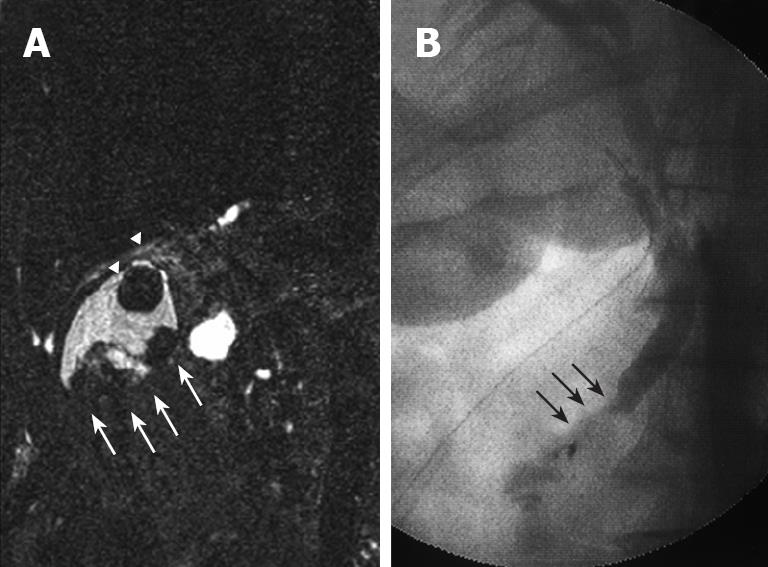 Figure 3 MRC. (A) showing irregular defects due to the elevated lesion of the fundus (white arrow) and a round defect due to stone incarceration in the neck (white arrow head), intra-operative cholangiography (B) revealing PBM and a 15 mm long common channel (black arrow). 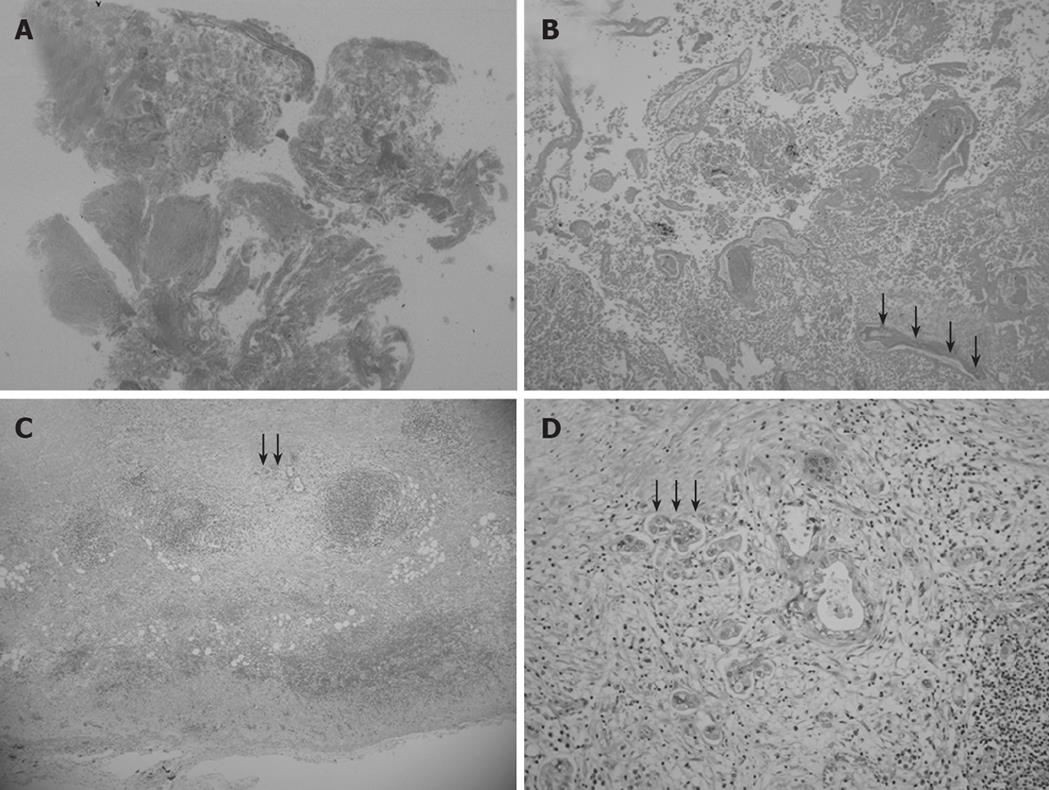 Traditionally, gallbladder (GB) cancer had a poor prognosis because of the lack of recognized symptoms at early stages. Early-stage GB cancer is often detected in resected specimens after cholecystectomy for benign diseases[1,2]. Moreover, GB cancer is sometimes detected in association with pancreaticobiliary maljunction (PBM), which is the union of the pancreatic and biliary ducts at a site outside the duodenal wall[3].

A 71-year-old Japanese man was referred to Takayama Red Cross Hospital (Gifu, Japan) due to severe right upper quadrant pain and frequent episodes of spiking fever and shivering chills. He had a history of hypertension and atherosclerosis. Ultrasonography (US) showed acute cholecystitis due to an incarcerated GB stone. He underwent drug treatment including sulbactam/cefoperazone (SBT/CPZ) in the first instance, and his symptoms were well controlled, without percutaneous transhepatic bile drainage. Although serum biochemistry showed elevated levels of aspartate aminotransferase, alanine aminotransferase, lactate dehydrogenase, γ-glutamyltransferase, alkaline phosphatase and C-reactive protein at admission, peripheral blood examination was normal after administration of SBT/CPZ. Thereafter, we performed detailed investigations.

Plain US of the GB showed wall thickening of the neck and body (consistent with cholecystitis), a strong echo with acoustic shadow at the neck (consistent with GB stones), and a mass-like lesion of the fundus (Figure 1A). In addition, this mass-like lesion moved according to the patient’s position. Doppler US revealed that the elevated lesion of the fundus had no feeding arteries and drainage veins (Figure 1B). Plain computed tomography (CT) showed a relatively low-density mass in the fundus, measuring 5 cm × 4 cm in diameter (Figure 2A). Contrast-enhanced CT revealed that this mass-like lesion had no positive enhancement in the early (Figure 2B) or late (Figure 2C) phase. Magnetic resonance imaging (MRI) showed a mass in the fundus with a slightly low intensity on T1-weighted images (Figure 2D) and a slightly high intensity on T2-weighted images (Figure 2E). Magnetic resonance cholangiography (MRC) showed a round defect due to an incarcerated stone in the neck and irregular defects due to the elevated lesion in the fundus (Figure 3A). Serum carbohydrate antigen (CA) 19-9 level was elevated, although other tumor markers including carcinoembryonic antigen, alpha-fetoprotein, squamous cell carcinoma antigen, CA125 and CA15-3 were all normal. Upper gastrointestinal and colorectal endoscopy did not reveal any abnormal findings. Positron emission tomography with fluorine-18-labeled fluoro-deoxyglucose (FDG-PET) showed no FDG uptake in the GB.

We were agonized in making the qualitative diagnosis of mass-like lesions of the fundus, such as benign tumor, cancer, debris or bile sludge. However, the incarcerated GB stone clearly caused acute cholecystitis. We performed elective surgery (three-port laparoscopic cholecystectomy), with informed consent required for an additional surgery based on histopathological diagnosis. Intraoperative cholangiography clearly revealed PBM (Figure 3B). In addition, amylase levels in the common bile duct (CBD) (bile obtained during cannulation of the CBD) and GB (bile obtained from the resected specimen) were quite high (82 752 IU/L and 69 442 IU/L, respectively). Postoperative course was uneventful, and CA19-9 levels normalized immediately after surgery.

The viable cells invaded perimuscular connective tissue, but did not penetrate the serosa. We were concerned about the safety margin, regional LN metastasis, and malignant potential of the CBD due to PBM. We therefore performed radical surgery, including wedge resection of the liver, including the GB bed to achieve negative margins, and radical dissection of regional LNs, including para-aortic LNs. Intraoperative histopathological examination of the induration of the mesocolon and peritoneum revealed no cancer dissemination. Furthermore, resection of the bile duct, including intrapancreatic and hilar bile ducts, was carried out. The intrahepatic bile ducts were reconstructed using hepaticojejunostomy in an end-to-side fashion. In addition, we resected the right hepatic artery by en-bloc resection with a safety margin, because an elastic, hard induration of the Calot’s triangle involved the right hepatic artery showing back flow from the remnant liver, and we did not reconstruct the hepatic artery. Histopathological findings and imaging studies finally staged the patient as T2, N0, H0, P0, M(-), stage II. No cancer, hyperplasia or dysplasia was found in the additionally resected specimens, and no regional LNs revealed metastasis (LNs #8a, 8p, 12a, 12b, 12p, 13a, 16a2, 16b1). In addition, no cancer or any precancerous lesions were seen in the extrahepatic bile duct microscopically. Until postoperative day 18, he had a good postoperative course except for gastric ulcer and pneumonitis. However, celiac artery rupture occurred suddenly on postoperative day 19, and he finally died of disseminated intravascular coagulation on postoperative day 20, despite intensive treatments.

Sakurai et al[8] reported a rare case of spontaneous necrosis of GB papillary adenocarcinoma of the fundus with PBM and suggested that the causes of spontaneous necrosis are disturbance of blood flow, gangrenous cholecystitis, necrotic debris, initial wall thickening due to cancer itself, PBM and increased intraluminal pressure in the GB. We could not clearly explain the cause of spontaneous necrosis, even after reviewing the literature. Although some of our findings are consistent with previously reported findings, such as cancer in the fundus with cholecystitis and PBM[8], some factors such as initial wall thickening due to cancer itself, intravascular thrombosis, gangrenous cholecystitis and necrotic debris were not seen in our case. We speculate that the cause of spontaneous necrosis of GB cancer is the increased intraluminal pressure in GB due to stone incarceration or the activated pancreatic enzymes consequently stimulating mutagenicity due to PBM[22,23]. In particular, our case clearly demonstrated a significantly elevated level of amylase in GB, suggesting that PBM participates in the process of necrosis. The case presented may show that overlapping of increased intraluminal pressure and activated pancreatic enzyme causes spontaneous necrosis.

Bile duct carcinoma including GB cancer is one of the malignant gastroenterological tumors which are most difficult to be cured and curative resection is essential for the long-term survival of such patients. In the surgical treatment for these cancers, systematic extended lymph node dissection is frequently required for curative resection. However, even with margin-negative resection, its prognosis after curative resection remains poor. The possible reason for the poor outcome is existence of occult lymph node metastasis that cannot be detected by conventional hematoxylin and eosin staining at surgical resection[24,25]. Recently, immunohistochemical and molecular techniques have made it possible to identify lymph node micrometastasis missed by traditional methods, and Taniguchi et al[24,25] clearly demonstrated that occult lymph node metastasis is crucial for the prognosis of bile duct carcinomas including GB cancer. At present, we are still troubled about the additional treatment for occult T2 GB carcinoma after cholecystectomy. For the time being, we will recommend the radical surgery including systematic lymph node dissection for this cancer, because of the excellent prognosis after additional radical surgery[1,2,13,15,16] and the possibility of lymph node micrometastasis[24,25].