Vasculitis, a systemic disorder with inflammation of blood vessel walls, can develop broad spectrum of signs and symptoms according to involvement of various organs, and therefore, early diagnosis of vasculitis is challenging. We herein describe a patient who developed a special case of systemic vasculitis with mononeuropathy multiplex, rectal perforation and antiphospholipid syndrome (APS) presented with pulmonary embolism.

A 61-year-old woman visited hospital with complaints of myalgia and occasional fever. She was initially diagnosed as proctitis and treated with antibiotics, however, there was no improvement. In addition, she also complained right foot drop with hypesthesia, and left 2nd and 3rd finger tingling sensation. She underwent nerve conduction study for evaluation, and it revealed sensorimotor polyneuropathy in the left arm and bilateral legs. Subsequent sural nerve biopsy strongly suggested vasculitic neuropathy. Based on nerve biopsy and clinical manifestation, she was diagnosed with vasculitis and treated with immuno-suppressive therapy. During treatment, sudden rectal perforation and pulmonary thromboembolism occurred, and further laboratory study suggested probable concomitant APS. Emergency Hartmann operation was performed for rectal perforation, and anti-coagulation therapy was started for APS. After few cycles of immunosuppressive therapy, tingling sensation and weakness in her hand and foot had been partially recovered and vasculitis was considered to be stationary.

Vasculitis can be presented with a variety of signs and symptoms, therefore, clinicians should always consider the possibility of diagnosis.

Vasculitis is a systemic disorder caused by inflammation of blood vessel walls, and classified into different types according to size of involved vessels and presence of fibrinoid necrosis or granulomas[1]. Among various signs and symptoms in vasculitis, peripheral nerve involvement is common and can be presented as mononeuropathy multiplex or distally polyneuropathy[2]. This case report describes a case of initial clinical manifestation of mononeuropathy multiplex associated with systemic vasculitis, followed by rectal perforation, and antiphospholipid syndrome (APS) presented with pulmonary embolism.

A previously healthy 61-year-old woman was referred to a tertiary hospital presented with myalgia and occasional high fever from one month ago.

She was treated with intravenous ceftriaxone (1 g qd) for a week under the diagnosis of proctitis, but her symptoms did not improve. With myalgia, she also reported right foot drop with hypesthesia, left 2nd and 3rd finger tingling sensation, and urinary and fecal incontinence before few days visiting hospital.

The patient had a free family history.

The neurological examination showed weakness in her right leg involving tibialis anterior and extensor hallucis muscles. The dorsiflexion and big toe extension power of the right foot were both graded 1/5 by manual muscle testing. Further sensory examination revealed hypesthesia in her right foot and left fingers.

She underwent whole spine magnetic resonance imaging for evaluation of spinal cord, and there was no definite abnormality.

The patient was further evaluated with nerve conduction study (NCS), and it revealed sensorimotor polyneuropathy in the left arm and bilateral legs (Tables 1-3). Mononeuropathy multiplex of inflammatory cause, in particular vasculitic neuropathy, was suspected, and sural nerve biopsy was performed. In biopsy, although vasculitis was not present, diffuse sequential axonal degeneration and secondary demyelination strongly suggested vasculitic neuropathy (Figure 1). 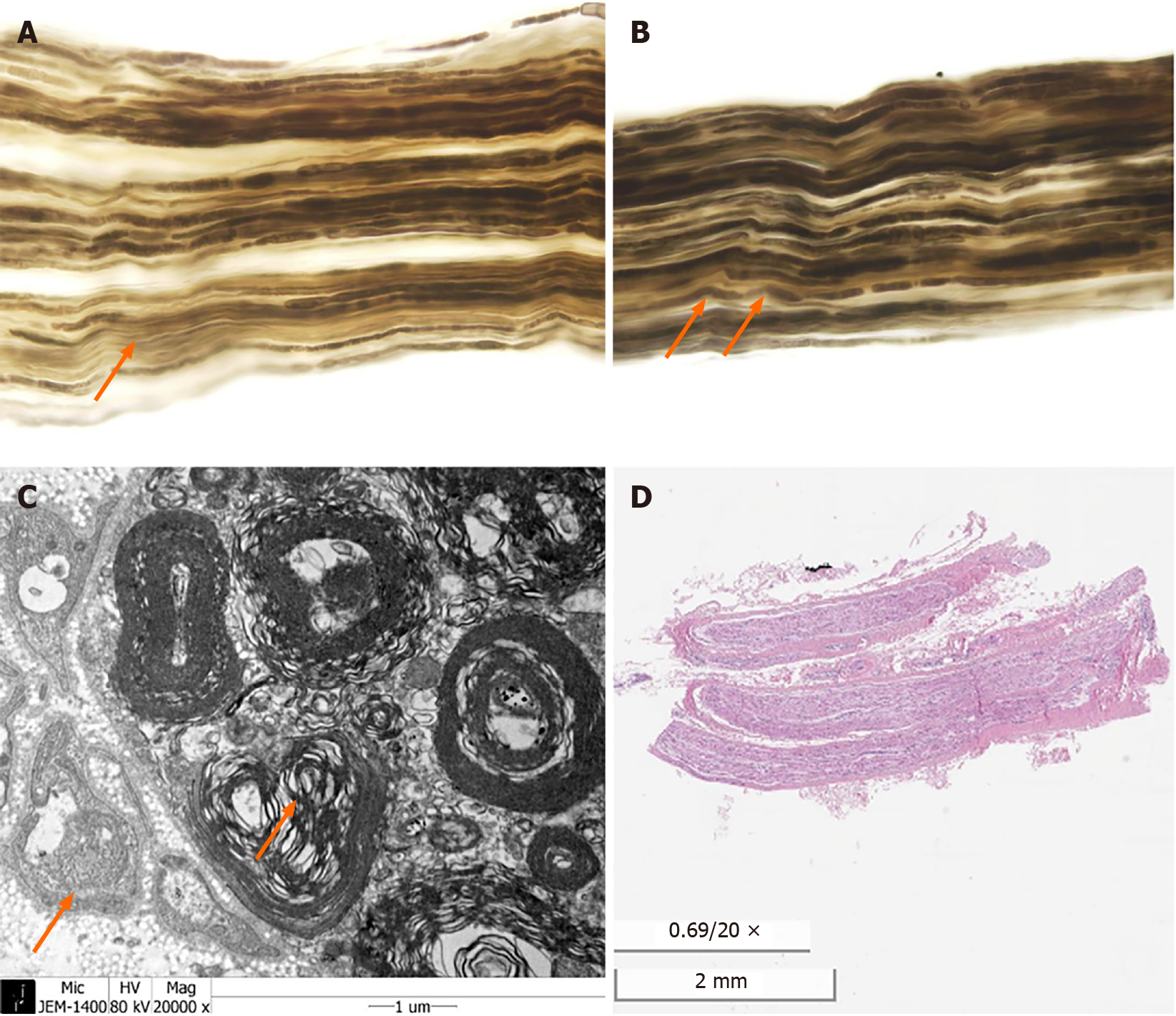 Based on nerve biopsy findings and clinical manifestation, she was diagnosed with systemic vasculitis.

Meanwhile, acute multifocal pulmonary thromboembolism and deep vein thrombosis were simultaneously found during admission. She underwent echocardiography to rule out possibility of amyloidosis which could have caused proctitis, and oscillating large mass in main pulmonary trunk bifurcation was incidentally found. Since the possibility of massive venous embolism is low in the case of vasculitis, additional blood tests were performed to rule out accompanied APS, and both anti-cardiolipin antibody (aCL) and lupus anticoagulant (LA) were positive. She started anti-coagulation therapy with subcutaneous injection of enoxaparine (60 mg bid) for one month, and was switched to oral warfarin with 2-3 target range of prothrombin time international normalized ratio. After 1 year later, both aCL and LA were changed to negative in follow-up examination.

After cyclophosphamide pulse therapies at one-month interval, tingling sensation and weakness in her hand and foot had been partially recovered. Four months later, follow-up electrodiagnostic study was performed, and it showed slightly aggravation in left median, ulnar, and bilateral peroneal nerves compared to previous NCS (Tables 1-4). With improving clinical symptoms, vasculitis was considered to be stationary, and she is now under observation after end of 6 cycles of cyclophosphamide therapies (750 mg qd).

Vasculitis may involve skin, lungs, kidneys, and other various organs, but it also can affect the peripheral nervous system as inflammation of epineural arteries of the nerve causes thrombosis and subsequent ischemic nerve damage. Peripheral nerve involvement of vasculitis is known as up to 60%-70%, especially common in small or medium-sized vessel vasculitides, and classically presents with mononeuropathy multiplex or distally polyneuropathy[2]. In this case, the patient was presented with mononeuropathy multiplex in the left arm and bilateral legs, confirmed with NCS. Although there was no definite vessel wall or perivascular inflammation in sural nerve biopsy, predominant axonal degeneration and secondary demyelination strongly suggested vasculitic neuropathy. However, because additional laboratory studies including ANCA were negative and specific organ involvement was absent, further specific diagnosis of small or medium-sized vessel vasculitis was limited.

APS is an autoimmune disease, characterized by recurrent arterial and venous thrombosis, and presence of antiphospholipid antibodies (aPL) including aCL and LA[3]. Prevalence of APS occurring in systemic vasculitis is known to ranges from 0.7% to 6%, and APS can occur with all kinds of vasculitis affecting small, medium, and large-vessels[4,5]. In this case, the patient was initially diagnosed with probable APS concurrent with vasculitis, however, both aCL and LA were changed to negative after 1 year later. This can be explained by either seroconversion of aPL in APS or initially transient presence of aPL associated with infection. However, considering associated massive thrombosis, seroconversion of aPL in APS is more plausible[6]. Meanwhile, the causal relationship of concurrent vasculitis and APS is still blurred, however, one possible theory is that endothelial cell disruption in vasculitis stimulate antiphospholipid antibody as phospholipids flipped to the outer side of endothelial cells[7].

In this case, plausible reason for rectal perforation is advanced proctitis caused by vasculitis, however, bowel ischemia or necrosis induced by APS is also possible regarding thrombotic obliteration of subserosal arteries in resected rectum.

Vasculitis can be initially presented with vasculitic neuropathy, therefore, clinicians should always consider the possibility of diagnosis.