To summarize the imaging, morphological and biological characteristics of sarcomatoid carcinoma (SC) of the prostate with bladder invasion not long after castration.

Our two cases were initially diagnosed with adenocarcinoma of the prostate due to dysuria. However, prostate SC was diagnosed after transurethral resection of the prostate (TURP) and castration after only 5 and 10 mo, respectively. Distinctive liver-like tissues appeared in the second TURP procedure in case 1, while a white, fish flesh-like, narrow pedicled soft globe protruded from the prostate to the bladder in case 2.

The sarcomatoid component of SC may arise from one of the specific groups of cancer cells that are resistant to hormonal therapy. Morphological characteristics of SCs can present as “red hepatization” and “fish flesh”. SCs grow rapidly and have a poor prognosis, and thus, extensive TURP plus radiation may be the treatment of choice.

Core Tip: The sarcomatoid component of prostate sarcomatoid carcinomas (SCs) may arise from one of the specific groups of cancer cells that are resistant to hormonal therapy. Morphological characteristics of the SCs can present as “red hepatization” and “fish flesh”. The SCs grow rapidly and have a poor prognosis, and thus, extensive transurethral resection of the prostate plus radiation may be the treatment of choice. Sarcomatoid components may be another pathway of lineage plasticity during prostate adenocarcinoma progression and therapy resistance.

Sarcomatoid carcinoma (SC) of the prostate accounts for less than 1% of all prostate malignancies, and may arise from both mesenchymal and epithelial components of the prostate[1,2].

Most SCs reported in the literature are single cases or small series, while only two studies examining more than 40 cases have been published. Both of these studies were from Johns Hopkins University, and the interval between the two studies was close to 10 years[1,3,4].

Endocrine therapy is one of the most important treatments for prostate cancer. However, androgen ablation and traditional chemotherapy cannot alter the natural course of SCs. It has been reported that there were no durable responses, although different chemotherapy regimens were used[3].

SCs are aggressive and have a poor prognosis. The median overall survival (OS) of patients with advanced SCs is 7.1 to 9 mo[1]. Among the cases with advanced disease, up to 60% are local prostate SCs with bladder invasion. Once the tumor invades the bladder, the OS is similar to that of metastatic SCs. However, their biological characteristics have rarely been well-reported previously. We report two cases of prostate SC with bladder invasion not long after transurethral resection of the prostate (TURP) and androgen deprivation. To the best of our knowledge, this is the first detailed report of the morphological characteristics of SC.

Case 1: A biopsy before admission indicated adenocarcinoma of the prostate. He received several cycles of catheterization due to acute urinary retention. Computed tomography (CT) showed local prostate nodules, which did not rule out prostatic hyperplasia. Signs of metastasis to the right eighth posterior ribs, pelvic and sacral bone were indicated by emission computed tomography (ECT).

Case 2: A TURP was performed to relieve urinary retention 5 mo ago. Orchiectomy was then performed as prostate adenocarcinoma was diagnosed. Unfortunately, the patient experienced almost constant hematuria after surgery. Bladder cancer was found one week before attending our hospital due to dysuria and urinary retention (Figure 1A). 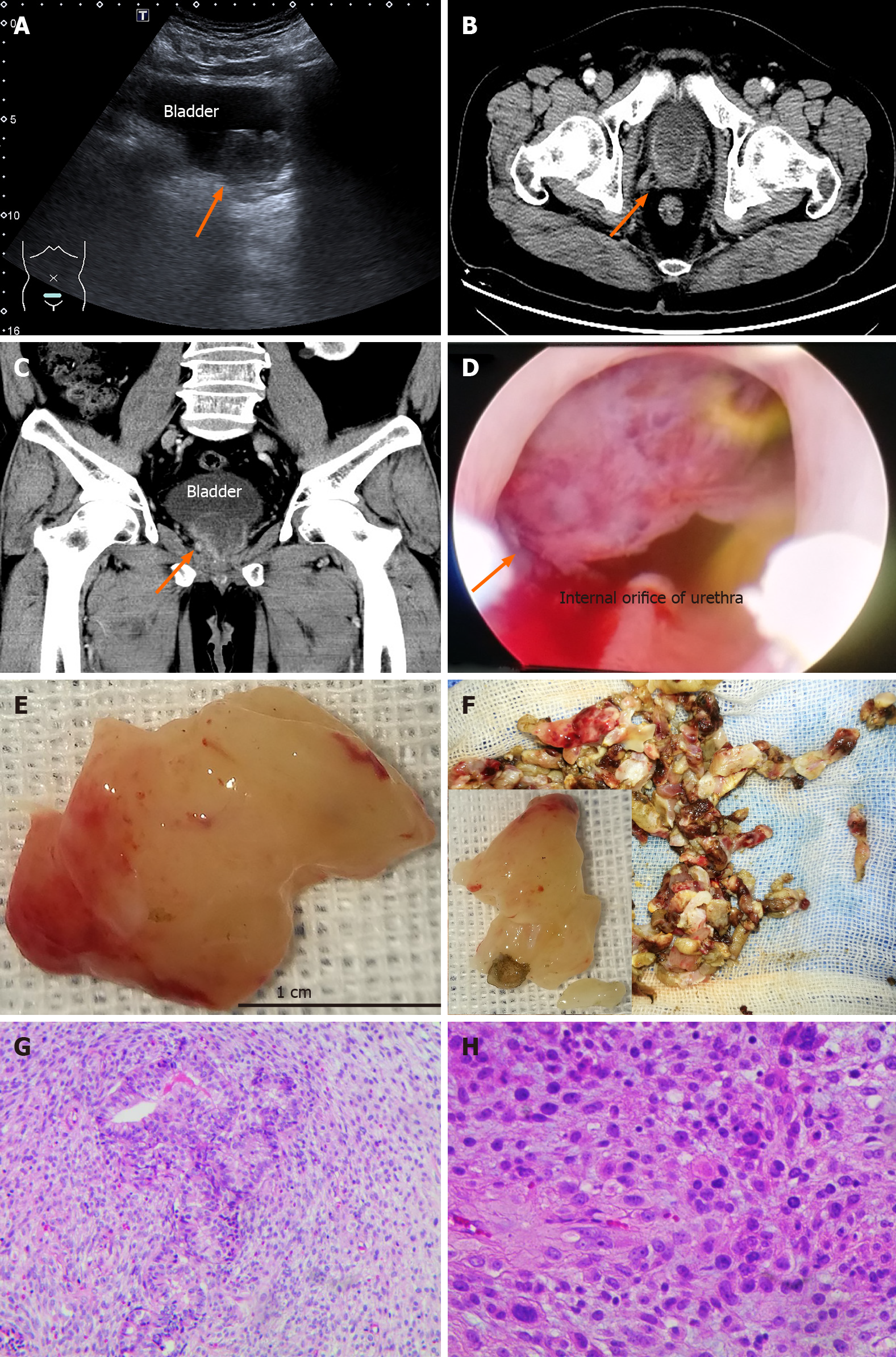 Figure 1 Clinical and pathological features of case 2 at the diagnosis of sarcomatoid carcinoma. A: Ultrasound: The size of the prostate was 3.9 cm × 3.2 cm, and a 1.5 cm × 1.1 cm round mass was present in the gland (arrow); B and C: The mass was approximately 4.1 cm × 3.0 cm × 4.0 cm on computed tomography (arrow), and enhanced scanning was uneven. No obvious abnormality was found in the bilateral seminal vesicles; D-F: A white, narrow pedicled, spherical solid tumor blocked the internal orifice of the urethra. The spherical lesion mainly arose from the 8-11 o'clock position of the prostate and resembled fish flesh in sections (arrow); G and H: Various heteromorphic tumor cells showed infiltrating growth, which included immature small round cells, subepithelial cells, spindle cells, lipoblasts and tumor giant cells (arrow), etc. G: Original magnification × 100; H: × 200.
History of past illness

Case 1: He received several cycles of catheterization due to acute urinary retention.

Case 2: A TURP was performed to relieve urinary retention 5 mo ago. Orchiectomy was then performed as prostate adenocarcinoma was diagnosed.

No relevant personal or family history.

Acute urinary retention was observed in both patients.

CT showed local prostate nodules, which did not rule out prostatic hyperplasia. Signs of metastasis to the right eighth posterior ribs, pelvic and sacral bone were indicated by ECT.

Case 1: TURP and bilateral orchiectomy were performed. The histopathology specimen showed Gleason scores of 3 + 4 = 7, prostate adenocarcinoma involving > 90% of the prostate with nerve invasion, but no vascular tumor thrombus (Table 1). Androgen resistant treatment was given after surgery. The histopathology specimen showed a poorly differentiated carcinoma with extensive necrosis. The majority of the tumor tissue was undifferentiated sarcoma with prostate adenocarcinoma involving less than 2% of the prostate (Figure 2A). The tumor cells were spindle-shaped, diffuse, and distributed with significant atypia and pleomorphism, mitotic activity, and tumor giant cells were visible. 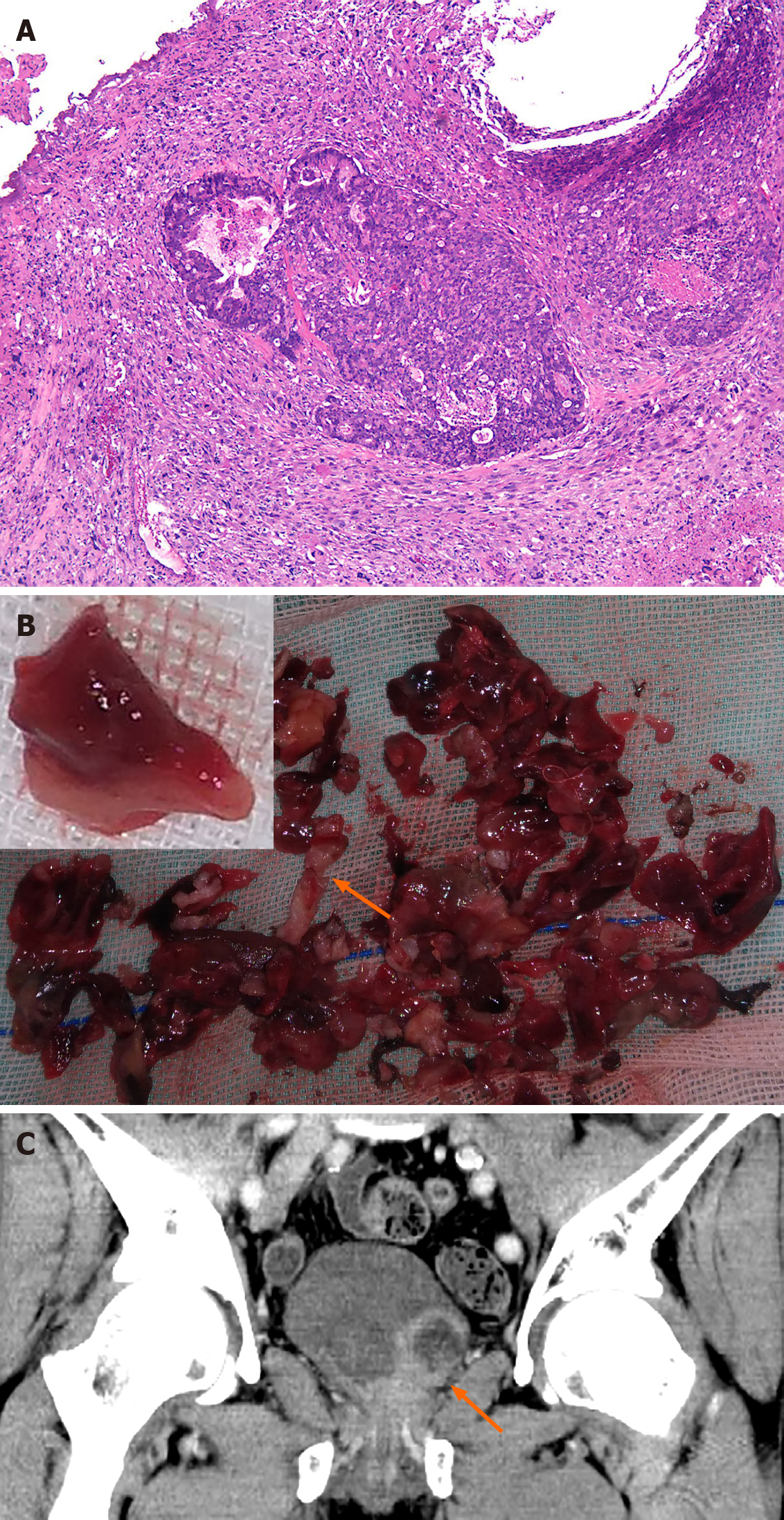 Figure 2 Clinical and pathological features of case 1 when diagnosed with sarcomatoid carcinoma. A: Histopathology specimen showed poorly differentiated carcinoma with extensive necrosis. Adenocarcinoma involved < 2% of the prostate; B: Completely different lesions were dull red in color resembling fresh clots and were isolated and soft (resembling liver) in texture (orange arrow). However, the prostate cancer tissues were pale due to ischemia, as shown in the figure (orange arrow); C: Computed tomography scan showing an irregular mixed density range approximately 4.7 cm × 4.8 cm × 4.2 cm near the previous operation area (arrow). The mass extended from the prostate to the lateral wall of the bladder and the internal orifice of the urethra.

Case 2: The volume of residual urine was approximately 291 mL. A TURP and TURBT were performed. A white, narrow pedicled globe protruded from the prostate to the bladder, and its sections were fish-like (Figure 1D-F). The patient is still alive with no dysuria. The histopathology specimen showed a high-grade sarcoma, consistent with pleomorphic liposarcoma (FNCLCC G3) (Figure 1G and H). The structures of the prostate and bladder tissues were similar under the microscope. Diverse cells, such as lipoblasts, immature small round cells, subepithelial cells, spindle cells and tumor giant cells were mixed with sparse prostate cells. The mitotic figures were counted as 12/2 mm. There was massive necrosis and interstitial vein thrombosis. Immunohistochemistry showed that P504 was negative in the hyperplastic prostate (Table 1).

Case 1: The patient was readmitted for dysuria 10 mo later. A CT scan showed an irregular mixed density range approximately 4.7 cm × 4.8 cm × 4.2 cm in the previous operation area with heterogeneous enhancement (Figure 2B and C). The CT value was 50 HU in the plain scan and 82 HU in the enhanced image. Necrosis and an area of liquefaction were observed in the mass. The surface of the mass was not smooth, but the boundary of the rectum was still clear. The bladder wall was pushed upwards (Figure 2C). The mass extended from the lateral wall of the bladder to the internal orifice of the urethra. It was red in color and extremely soft. The appearance resembled a clot, and the texture was liver-like (Figure 2B).

The final diagnosis in both patients was SC of the prostate with bladder invasion shortly after androgen deprivation for prostate adenocarcinoma.

Case 1 died eight months later. The second case accepted only TURP and was satisfied with the improvement of his dysuria. He is still alive.

SC of the prostate is a rare disease with slightly over 100 reported cases in the English literature[1]. Early localized prostate SCs can be effectively treated with prostatectomy and/or radiation. However, the prognosis is very poor in patients with bladder invasion whether the treatment is hormonal therapy, cystoprostatectomy, radiotherapy or chemotherapy[5]. Extensive TURP combined with radiation therapy seems to have a limited effect in delaying the progression of SCs[4,5].

The study from Johns Hopkins University suggests that the sarcomatoid component may be androgen-independent[1]. This is based on its lack of a prostate-specific antigen (PSA) or radiographic response to androgen deprivation. Our data strongly support these views since the tumors in our two cases arose shortly after orchiectomy.

In the current study, the morphological characteristics of the sarcomatoid components were recorded. The mass resected in the second operation of the first case was red and very soft like liver, very unlike the tissues removed during the first operation in case 1 (Figure 2B, arrow). The new texture was called “red hepatization of the prostate” and was easily differentiated from blood clots, prostatic cancer, and normal bladder tissue. In case 2, the bladder tumor was only found one week before surgery, although the patient underwent 4 cystoscopes within the previous 5 mo. The white, fish flesh-like, narrow pedicled globe protruded from the prostate to the bladder (Figure 1B and C). We can conclude that the masses in our cases developed within 5 to 10 mo after castration as the sarcomatoid component tends to grow rapidly[6]. However, the average interval between the original diagnosis and the detection of an SC has been reported to be 6.8 years (6 mo to 16 years) and 8.3 years (9 mo to 20 years), respectively[3].

Our study results suggest that SCs may originate from a special group of hormonal resistant prostate stromal cancer cells found near the bladder neck and they may accelerate their growth when exposed to stimulation and changes in their environment. The bladders were normal in appearance in the first and second operations in the current cases. Various heteromorphic tumor cells showed infiltrating growth, which included immature small round cells, subepithelial cells, spindle cells, lipoblasts and tumor giant cells, etc (Figure 1G and H). The tumors were located near the proximal of the caruncle in the current cases and the tumor was limited to the bladder neck and proximal end of the prostate.

Consistent with the majority of SC patients with a prior history of adenocarcinoma, both of the current cases had a history of adenocarcinoma and underwent hormonal deprivation therapy. The most common clinical presentation was local symptoms. A worsened progressive intensive dysuria resulting in acute urinary retention is the major symptom[7]. The very soft mass near the internal orifice of the urethra also resulted in dysuria in case 1. The intraurethral orifice was blocked by a spherical tumor in case 2 (Figure 1D-F).

We present the morphological characteristics of the sarcomatoid components of prostate tumors with bladder invasion. Red hepatization of the prostate and the presence of white “fish flesh” were the primary morphological characteristics of these SCs. SCs have a poor prognosis and may originate from a special group of hormonal resistant prostate stromal cancer cells. Radiation therapy and extensive TURP may be the treatments of choice for SCs.