Pulmonary Langerhans cell histiocytosis (PLCH) is a relatively rare type of lung disease, common in middle-aged smoking men. It is characterized by proliferation and infiltration of Langerhans cells, and the formation of multiple parabronchial mesenchymal nodules in lung tissue, and may lead to organ dysfunction. There are no typical symptoms and signs, and it is easily misdiagnosed or missed, and therefore deserves clinical attention and further discussion.

We describe the case of a nonsmoking 46-year-old man with PLCH diagnosed based on clinical manifestations of fever and dry cough, with a history of hypothyroidism and diabetes insipidus for 9 years. Computed tomography (CT)- and CT-guided puncture examinations revealed no abnormalities, and he ultimately underwent thoracoscopic biopsy to confirm the diagnosis. The pathological diagnosis was PLCH. Thyroid function was maintained by medication. Pituitary magnetic resonance imaging showed that the pituitary stalk had become thinner.

Core Tip: We describe the case of a 46-year-old man with pulmonary Langerhans cell histiocytosis, diagnosed due to clinical manifestations of fever and dry cough, with a history of hypothyroidism and diabetes insipidus for 9 years. The pathological diagnosis was lung Langerhans cell histiocytosis. Thyroid function was maintained by medication. Pituitary magnetic resonance imaging showed that the pituitary stalk had become thinner. A comprehensive multidisciplinary analysis can significantly improve disease diagnosis.

Langerhans cell histiocytosis (LCH) is a group of diseases characterized by abnormal clonal accumulation of CD207+ CD1a+ cells that resemble epidermal mononuclear phagocytes, i.e., Langerhans cells. These factors cause local or systemic infiltration and granuloma formation, constituting a potentially fatal condition[1]. Furthermore, LCH can involve multiple systems in adults, including osteolytic lesions and the lungs, pituitary, thyroid, liver, lymph nodes and skin[2]. As one of the most commonly affected organs, the lung may be involved as an isolated organ or as part of multisystemic LCH. Chest imaging typically reveals nodules, cavities and cysts in both lungs, mainly in the upper and middle fields. In cases with hypothalamus involvement, polydipsia and diabetes insipidus (DI) may occur. Although LCH rarely invades the thyroid gland, it is often accompanied by lymphocytic thyroiditis (mainly diffuse or nodular swelling), and in approximately 70% of cases, thyroid hypofunction ensues[3].

We report the case of a nonsmoking 46-year-old man with a history of hypothyroidism and DI who visited his doctor due to respiratory symptoms. This case illustrates the refractoriness of multisystem LCH in adults and highlights the important characteristics of LCH biology. We discuss this case in detail to raise awareness and to highlight its characteristics and potential complications in the clinic.

A 46-year-old man was referred to the First Affiliated Hospital of Dalian Medical University in April 2021 due to fever with dry cough for 9 mo.

Before attending the hospital, a chest CT examination was performed, and multiple nodules with blurred borders were found in both lungs, and a needle biopsy of the upper lobe of the left lung was performed under CT guidance. The cytology report showed a few ciliated columnar epithelial cells and lymphocytes, but no tumor cells. Pathological reports indicated fibrous tissue proliferation accompanied by scattered or focal infiltration of lymphocytes and neutrophils, and carbon foam deposition. He received symptomatic treatment, but his symptoms did not improve. One month later, CT-guided puncture was performed again, but there was still no positive result.

He had a history of hypothyroidism and DI for 9 years, but no history of smoking.

He had a history of hypothyroidism and DI for 9 years, but no history of smoking. He had no family history.

The patient’s laboratory test results are shown in Table 1. 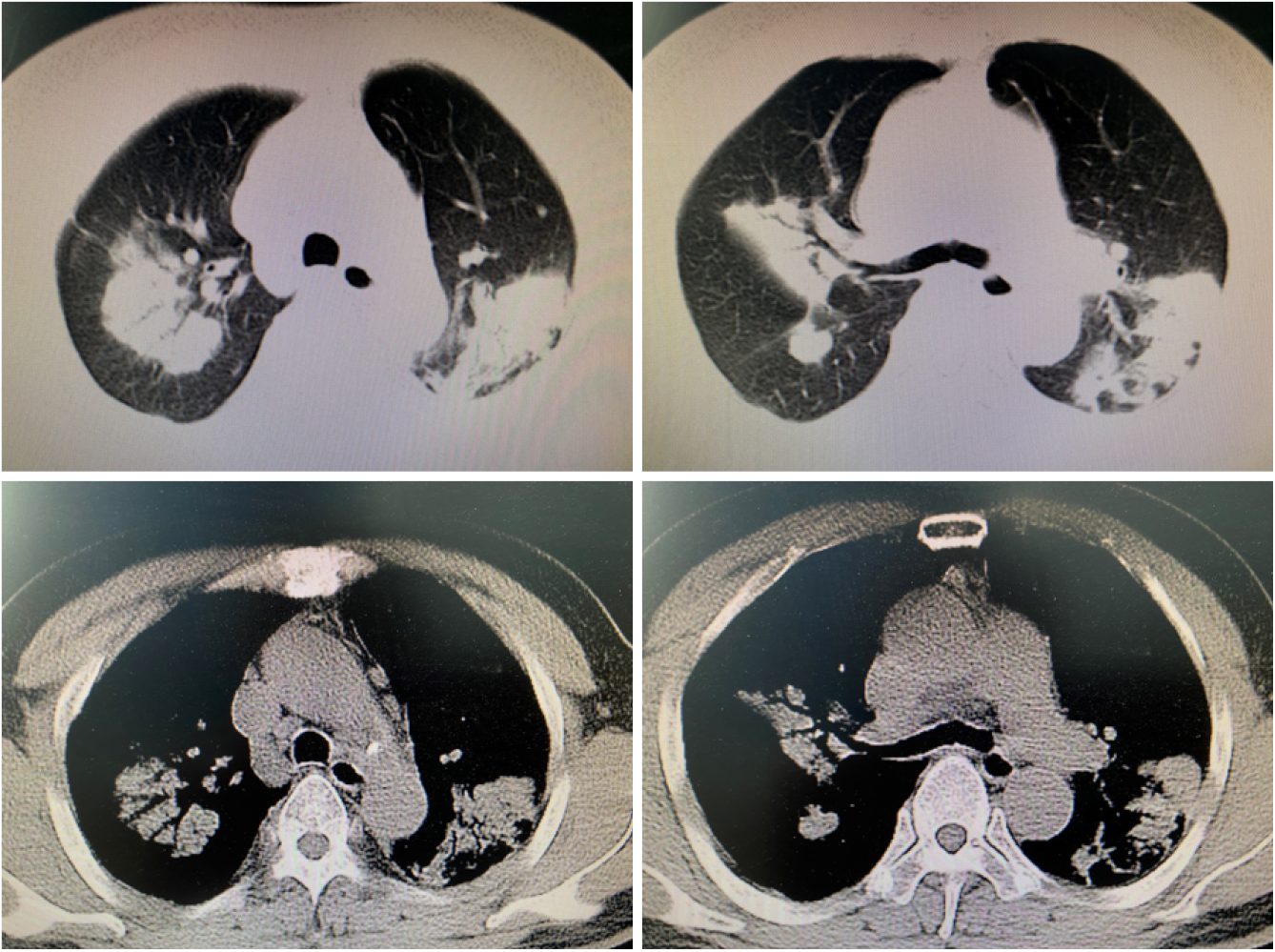 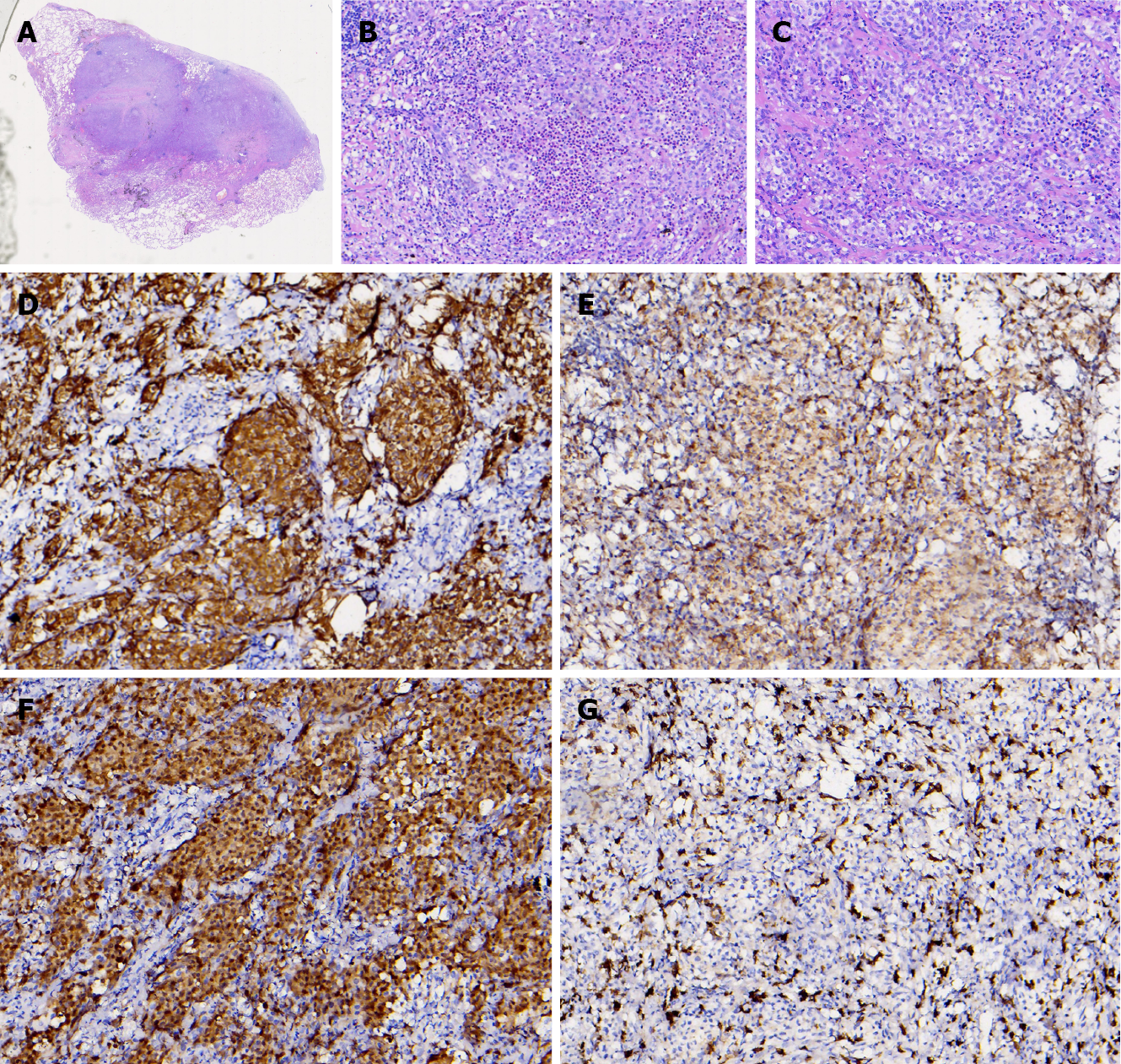 The disease is a low-grade malignant tumor. We gave symptomatic treatment to this patient, which required follow-up by hematology department for further treatment of PLCH.

At follow-up, the patient did not have further treatment, and his condition has not progressed.

LCH is an atypical clonal proliferation of mononuclear dendritic cells that can affect single or multiple systems, leading to organ dysfunction. Arico et al[4] reported that among adult LCH patients, the lungs are affected in 58.4%, with 29.6% having central DI, and 68.6% having multiple system LCH. The BRAF V600E mutation, involving the mitogen-activated protein kinase signaling pathway, has been identified in LCH, but therapeutic options remain limited[5,6].

PLCH manifests in the lung during systemic LCH. It is a rare diffuse interstitial lung disease and usually occurs in young smokers. The most common symptoms of PLCH are dry cough, difficulty breathing, and chest pain. Approximately 70% of patients have a disorder in lung diffusion capacity for carbon monoxide, with restrictive ventilatory dysfunction in the early stage of the disease and obstructive ventilatory dysfunction on progression[7]. Lung high-resolution CT shows multiple small nodules with blurred boundaries in both lungs, with cystic changes. During the development of the disease, the nodular lesions gradually decrease, and the fibrotic changes in lung tissue and multiple cystic vacuoles can be observed more clearly. The diagnosis of PLCH relies on lung biopsy. However, the detection rate using needle biopsy, including CT puncture guidance and bronchoscopy puncture guidance, is very low. Some adult LCH patients (10%-20% of cases) present with extrapulmonary involvement, such as DI and endocrine, skin and bone diseases.

The current patient was a middle-aged male with no history of smoking. His first symptoms were a dry cough and fever, and lung CT showed multiple proliferative lesions in both lungs, similar to inflammation, with blurred boundaries. His lung presentation was atypical, the results of two CT-guided biopsies were negative, and antibiotic treatment was not effective; the lungs showed slow progression. Pulmonary function findings indicated normal lung diffusion capacity for carbon monoxide. Considering that the consolidation of both lungs was located near the hilar region, the area of alveolar involvement was small, and there was no interstitial change in either lung, with little effect on diffusion function. A past medical history of DI and hypothyroidism should not be ignored. Although the thyroid function of the current patient was almost within the normal range due to medication, symptoms of polyuria were still present, and urine osmolality and specific gravity were significantly lower than normal. Thus, PLCH was suspected, but the cause still needed to be determined. PET-CT examination revealed involvement of no other organs or tissues. Surgical thoracoscopic lung biopsy was performed to remove part of the lesion tissue from the right lobe. The immunohistochemistry results showed CD1a (+), S-100 (+), CD68 (weak+), and CD163 (-), and the pathological diagnosis was lung Langerhans cell tissue hyperplasia with organization. Therefore, histopathological examination is an important basis for the diagnosis of LCH. Langerhans histiocytosis is divided into three stages: (1) A cell-rich stage; (2) A proliferation stage; and (3) A fibrosis stage. The lung disease in our patient was in the proliferative stage. Most authors[8-10] believe that thickening of the pituitary stalk (> 3 mm) and the disappearance of a high signal in the posterior pituitary by MRI are characteristic of central DI, which can be combined with vasopressin test results and nephrogenic DI. The location of the pituitary stalk injury is related to the degree of neuron loss, which is more serious when horizontal damage occurs[11]. The pituitary MRI of this patient showed that the pituitary stalk had become thinner, which was atypical. Considering that the pituitary gland was involved in the early stage and the pituitary stalk was thicker, the pituitary entered the fibrosis phase as the disease progressed, manifesting as pituitary atrophy and thinning of the pituitary stalk. In this case, the thyroid was involved, which manifested as thyroid hypofunction. PET-CT showed that the thyroid gland was slightly smaller, with diffusely reduced density. Similar to the appearance of the pituitary gland, the thyroid gland also progressed to a fibrotic stage, with thyroid atrophy. A recent study reported[12] that LCH rarely invades the thyroid gland and that approximately 70% of cases are accompanied by thyroid hypofunction, mainly diffuse or nodular enlargement, possibly with calcification. Therefore, when a patient shows abnormal thyroid function, the hypothalamic pituitary hormone axis should be screened in detail to improve diagnosis.

In summary, the current patient presented at the hospital with respiratory symptoms and was diagnosed with LCH by lung biopsy; pathology and imaging revealed the proliferative phase. Combined with the patient’s central DI and hypothyroidism, it is believed that LCH began in the pituitary gland and thyroid and then entered the fibrosis stage as the disease progressed. There is another possibility that 9 years previously, the patient developed central DI due to hypothalamus-pituitary disease, with secondary hypothyroidism. He mainly presented with PLCH of single-organ involvement, but this possibility is extremely small: one person developed multiple diseases at the same time.

In summary, LCH remains an exceedingly rare entity in adults, frequently presenting as multiple system disease with important organ involvement. Pulmonary nodules and cystic lesions progress slowly, and antibiotics are ineffective; however, biopsy can improve the diagnostic rate. The possibility of LCH invasion should be strongly considered in patients with hypothalamic and pituitary diseases.