Spinal manipulation therapy (SMT) has been widely used worldwide to treat musculoskeletal diseases, but it can cause serious adverse events. Spinal epidural hematoma (SEH) caused by SMT is a rare emergency that can cause neurological dysfunction. We herein report three cases of SEH after SMT.

SEH caused by SMT is very rare, and the condition of each patient should be evaluated in full detail before operation. SEH should be diagnosed immediately and actively treated by surgery.

Core Tip: Spinal manipulation therapy (SMT) has been widely used worldwide to treat musculoskeletal diseases, but it can cause serious adverse events. Spinal epidural hematoma (SEH) caused by SMT is a rare emergency that can cause neurological dysfunction. We herein report three cases of SEH after SMT, and review a series of literature. All three patients underwent surgery after failed conservative treatment and returned to normal after 3 mo of follow-up. We focused on early recognition and surgical treatment.

Spinal manipulation therapy (SMT) has been widely used to treat musculoskeletal diseases. The most common indications are neck and back pain. SMT achieves better clinical results than acupuncture or medication[1-3], and complications are relatively rare. However, spinal epidural hematoma (SEH) is a serious complication after SMT, which can cause spinal neurological dysfunction and should therefore be treated. Here, we report three cases of SEH caused by SMT. One patient had a family history of hemangioma, whereas they all had no history of any coagulatory disease or anticoagulant medication. Platelets and coagulation were normal at the time of admission, and all patients underwent surgery after failed conservative treatment. All patients returned to normal after 3-mo follow-up.

Case 1: A 30-year-old woman was admitted for neck pain and numbness in both upper limbs for 3 d.

Case 2: A 55-year-old man was admitted to the emergency room due to back pain and numbness and weakness of both lower limbs for 1 d.

Case 3: A 28-year-old man suddenly developed numbness and weakness in both lower limbs 4 h after SMT.

Case 1: The patient developed symptoms immediately after SMT 3 d before admission. She took analgesic medications but her symptoms did not completely resolve.

Case 2: The patient experienced sudden back pain after SMT the day before admission, accompanied by numbness and weakness in both lower limbs, an inability to stand or walk, and difficulty urinating. Dehydration medication was given in the community hospital, and the symptoms were not significantly relieved, so he was transferred to our hospital.

Case 3: The patient suddenly developed numbness and weakness in both lower limbs 4 h after SMT. He was unable to stand or walk and had mild back pain, so he was rushed to our emergency room.

None of these three patients had obvious diseases in the past.

Case three had a family history of hemangioma, and he also had a hemangioma about 1 cm in size, located on the T11. But they all had no history of any coagulatory disease or anticoagulant medication.

Case 2: The sensations, tendon reflexes, and cremaster reflexes of the lower extremities were reduced on both sides. The patient’s muscle strength was grade IV, and his spinal cord injury was grade D.

Platelets and coagulation were normal at the time of admission. 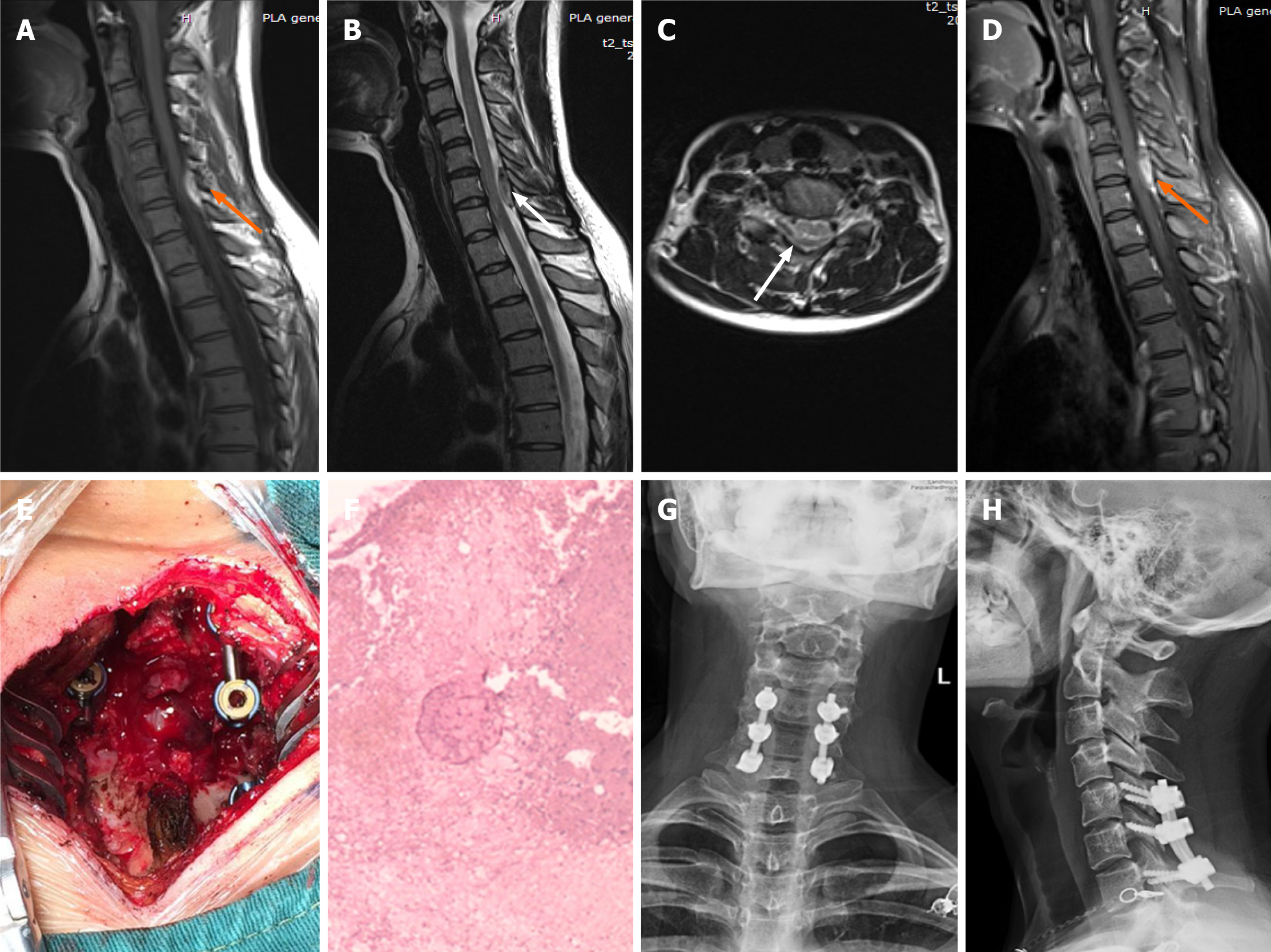 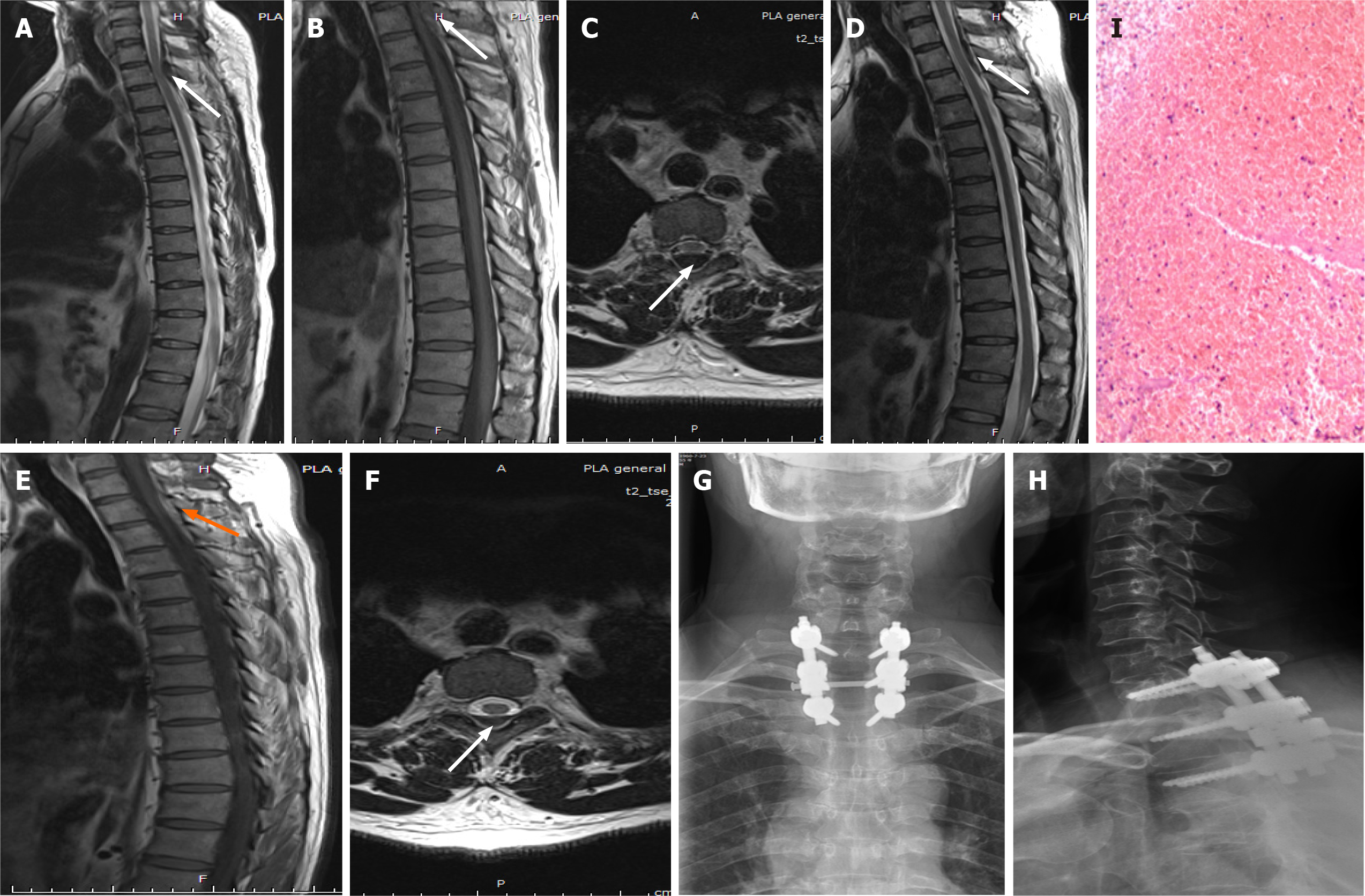 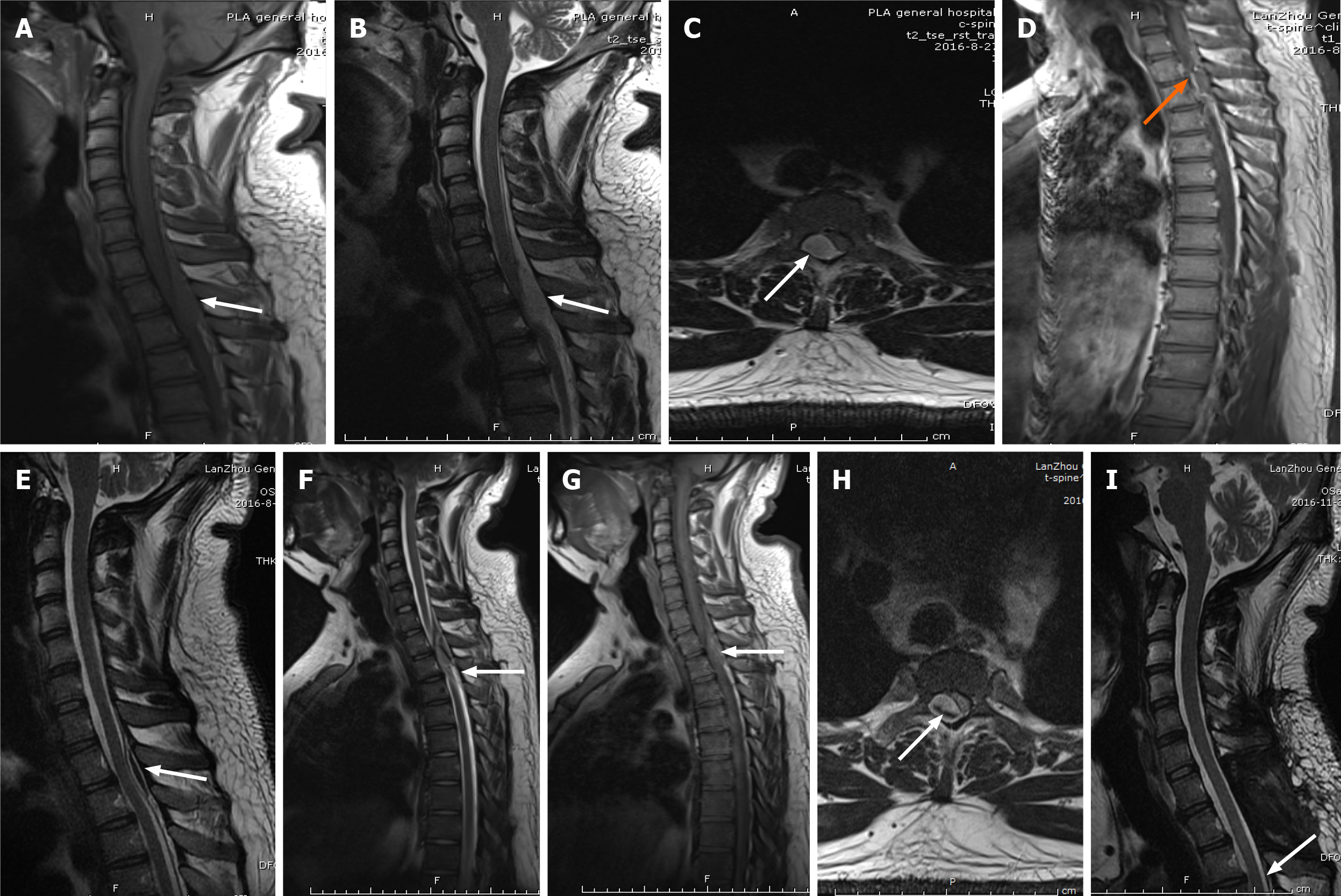 Case 1: A laminectomy with internal fixation was performed immediately after admission and the hematoma was removed (Figure 1E). Blood clots were found during the operation, but no bleeding vessels were observed. The postoperative pathology confirmed a hematoma (Figure 1F).

Case 2: After admission, the patient refused surgery and requested conservative treatment, but his symptoms did not resolve. A review of the MRI scan obtained 72 h later revealed that the mass was still compressing the spinal cord (Figure 2D-F). Laminectomy and internal fixation were performed and the hematoma was removed (Figure 2G and H). Blood clots were found during the operation, but no bleeding vessels were observed. The pathological examination suggested a hematoma (Figure 2I).

Case 3: We recommended surgery after admission, but the patient wanted conservative treatment. A 66-h follow-up MRI scan showed a decrease in the mass (Figure 3E), so conservative treatment was continued. The patient suddenly developed paraplegia and complete loss of sensation in both legs after 72 h. A review of the MRI scan indicated fresh bleeding (Figure 3F-H), so an emergency laminectomy was performed and the hematoma was removed. A vein ruptured during the operation, causing massive bleeding; we used hemostatic material to tamp it. Due to the active bleeding during surgery, a specimen could not be obtained for pathological examination.

Case 1: The patient was discharged on postoperative day 5, and her neurological function had fully recovered to grade E. She returned to normal life after the 3-mo follow-up, and the internal fixation position was good (Figure 1G and H).

Case 2: The patient’s urine function was fully restored 4 d after surgery. His neurological function recovered to grade E 1 wk after surgery, and he returned to normal life after the 3-mo follow-up.

SMT is a manual technique for which there is currently no accepted definition, and it is usually performed with a high-speed, low-amplitude thrust that can quickly adjust the joint, often accompanied by a popping sound[4]. Moreover, due to its relatively low invasiveness, many medical and non-medical practitioners use SMT, such as chiropractors, osteopaths, and physical therapists[1]. Vertebral artery dissection, spinal cord injury, cauda equina syndrome, cervical subluxation, and cerebrovascular accident can occur even in the hands of experienced therapists, and may cause death in rare cases[5,6]. Patients with chronic coagulatory deficits, inflammatory spondylosis, osteoporosis, or aortic aneurysm or dissection, and those on long-term anticoagulant therapy are more likely to experience these adverse events[7].

Although many serious adverse events after SMT have been reported, the exact incidence has not been reported. Studies have reported serious adverse event rates of 1 in 20000 and 1 in 250000000 operations. Others reported rates of 1 in 400000 and 1 in 2 million operations[5,8]. Most reports assert that SEH is caused by SMT. We review 18 literature reports (Table 1). Three patients had a history of anticoagulant therapy, two had osteoporosis or spinal degeneration[9-11] , and three had a history of spinal degeneration[6,12,13]. There was also one case with an arteriovenous malformation[14]. Of our three cases, one had a family history of hemangioma, whereas they all had no history of coagulation disease or use of anticoagulant medication.

SEH is a rare emergency in which blood accumulates in the spinal epidural space; it begins with back and nerve root pain, and progresses to mild paralysis and urinary retention. In severe cases, SEH may develop into paraplegia or quadriplegia within minutes, hours, or days[15]. Common causes include trauma, lumbar puncture, drug-induced coagulopathy, and genetic coagulation disorders. A few idiopathic cases without a clear etiology have also been reported[16], in addition to clinical cases after minor trauma, such as SMT (Table 1). SEH has been characterized as “idiopathic, spontaneous, and secondary”[16,17]. Most patients develop limb numbness and weakness, severe back pain, and quadriplegia or dyspepsia soon after SMT (up to a few hours later; Table 1), but there have also been reports of delayed symptoms (after 1-3 d[11,18]). All of our cases developed symptoms immediately after SMT, but one case was only detected by examination 3 d later.

The causal relationship between SMT and SEH is often uncertain. Bleeding can occur from a vein or artery. Venous rupture is generally considered to be related to the intravertebral venous plexus[19]. The epidural space of the spinal cord is located in the spinal canal. It contains loose areolar tissue and an extensive internal venous plexus that receives projections from the vertebral bodies and spinal cord. This internal venous plexus communicates freely with the external venous plexus, which together form Batson’s veins. This low-pressure system without valves is particularly susceptible to sudden changes in pressure, such as when lifting, straining, coughing, or vomiting[15]. When performing SMT, a low-amplitude thrust will produce sufficient pressure in the spine for rupture of fragile veins, which in turn will leads to clinical symptoms of compression of the spinal cord. However, it has been posited that the hematoma originates from an artery[20]. Lidder et al[21] observed ruptured veins during the operation. We detected venous bleeding during surgery in a patient with a family history of hemangioma, but could not find the bleeding source. Hemostatic materials were used to stop the bleeding. Although the cause of bleeding was not clarified, timely diagnosis and early treatment are very important for SEH.

Most people believe that surgery is still the first choice for treating SEH. Liao et al[23] reported that surgery for SEH is safe and effective. When performed within 48 h after the initial attack, complete neurological dysfunction is recommended not to exceed 12 h[23]. Groen and van Alphen[24] reported that surgery was performed within 36 h in patients with complete neurological dysfunction, and within 48 h in those with incomplete neurological dysfunction[24]. The procedure involves decompressive laminectomy and evacuation of the hematoma. Most patients in the literature underwent surgery at the time of symptom onset or exacerbation, and postoperative recovery was good[12,14,25-27]. However, three patients underwent surgery after a delay of several days; their symptoms did not completely resolve[10,21,28] , and one patient died from complications[6]. Although the majority of studies reported good recovery after surgical excision of SEH, there have also been reports that conservative treatments can provide good results[29-32]. Fat tissue in the epidural space contains a huge network of capillaries that usually absorbs foreign substances; thus, the SEH should be absorbed over time. However, irreversible nerve damage can occur during absorption[33]. Conservative treatment was preferred in all of our cases, but the nerve injury symptoms did not completely disappear. Two patients were operated after conservative treatment proved ineffective; one patient developed sudden paraplegia during conservative treatment and was immediately operated in the emergency department. The symptoms disappeared after the operation.

Although surgery can achieve good results, clinical follow-up is needed to prevent the occurrence of complications. To avoid SEH after SMT, good planning and individualized assessment are needed, and risk analysis should be performed based on the results of multiple clinical studies[34].

In conclusion, before proceeding with SMT, each patient should be evaluated in detail and checked for risk factors. In cases where the physical condition changes rapidly, physicians should be alert to the danger and send the patient to the emergency department for a complete MRI examination. We recommend surgery if neurological symptoms appear.