A 91-year-old man with dyspnea and hypotension was transferred from a nursing hospital. He was on regular hemodialysis and had a history of severe grade of tricuspid regurgitation. There was no leukocytosis or fever upon admission. Repetitive and sequential blood cultures revealed absence of microorganism growth. Chest computed tomography showed lung consolidation and a large pleural effusion. A mobile band-like mass on the CS, suggestive of vegetation, was observed on echocardiography. We diagnosed him with infective endocarditis involving the CS, pneumonia, and septic shock based on echocardiographic, radiographic, and clinical findings. Infusion of broad-spectrum antibiotics, fluid resuscitation, inotropic support, and ventilator care were performed. However, the patient died from uncontrolled infection and septic shock.

CS vegetation can be fatal in hemodialysis patients with impaired immune systems, especially when it delays the diagnosis.

A 91-year-old male patient admitted to a nursing hospital was transferred to our hospital with dyspnea, cough, and a confused mental state.

The patient has undergone regular hemodialysis for one year. He had a medical history of atrial fibrillation, severe grade of tricuspid and mitral regurgitation, and chronic obstructive pulmonary disease. He also had a stroke 5 years previously.

At the time of admission in our institution, blood pressure, heart rate, respiratory rate, and body temperature of the patient were 85/40 mmHg, 110 /min, 20 /min, and 36.5 °C, respectively.

Chest radiography revealed a large right pleural effusion and pulmonary edema (Figure 1A). Chest computed tomography showed consolidation in the right upper and middle lobes and total atelectasis of the right lower lobe (Figure 1B). The pleural effusion was a transudate, according to the following Light’s criteria[5]: Pleural fluid protein-to-serum protein ratio of 0.4; pleural fluid lactate dehydrogenase (LDH) -to-serum LDH of 0.6; and pleural fluid LDH to the upper normal limit for serum of 0.6. There was no growth of microorganisms on pleural fluid culture. Transthoracic echocardiography showed a moderate grade of eccentric tricuspid regurgitant jet flow directed towards the CS and a mobile band-like echogenic mass (longitudinal dimension of approximately 8 cm) attached to the ostium of the CS and posterolateral wall of the right atrium, suggesting the presence of vegetation (Figure 2 and Supplementary Videos 1-3, which demonstrate a vegetation on echocardiography). He also had a moderate grade of pulmonary hypertension (estimated systolic pulmonary arterial pressure = 61 mmHg) and right atrial enlargement (30 cm2). Other cardiac structures, including the valves, were unaffected, and the left ventricular ejection fraction was normal. There was no radiographic evidence of pulmonary thromboembolism or deep vein thrombosis. Sequential blood culture results were negative. 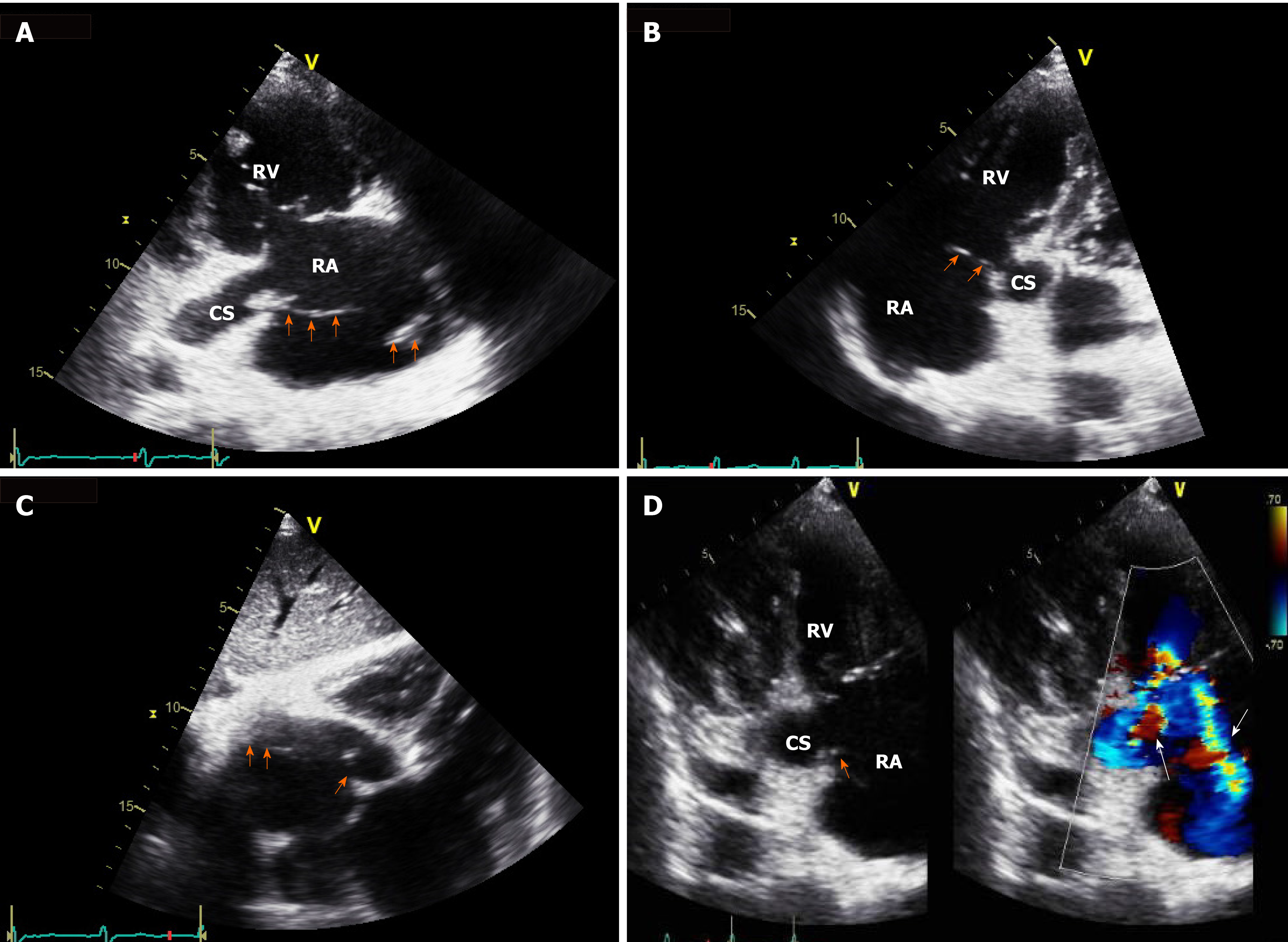 The patient was diagnosed with septic shock due to CS endocarditis and pneumonia. Respiratory acidosis with metabolic decompensation was accompanied by severe infection, acute exacerbation of chronic obstructive pulmonary disease, hypoventilation, and a large pleural effusion.

Broad-spectrum antibiotics, including teicoplanin and meropenem, were administered. A chest tube was inserted at the site of pleural effusion. A mechanical ventilator and continuous renal replacement therapy were administered. Fluid resuscitation and inotropic support were provided to maintain blood pressure.

The CS is a structure that receives approximately 60% of the total cardiac venous supply and drains into the right atrium[6]. It is mainly injured during right cardiac procedures, including insertion of central venous catheter, cannulation of the CS during heart surgery, electrophysiologic study, and placement of intracardiac devices[6]. Unlike traumatic injury, spontaneous endothelial injury of the CS has been reported in some conditions causing accelerating or turbulent jet flow in the CS, such as coronary arteriovenous fistula between the left circumferential artery and CS and eccentric tricuspid regurgitation towards the CS[4,7-9]. In our case, the substantial tricuspid regurgitant jet flow directed towards the CS and posterolateral right atrial surface might have caused endothelial denudation; subsequently, bacteremia during hemodialysis or sepsis due to pneumonia probably led to the formation of vegetation at that location.

Vegetation of the CS resembles thrombosis in appearance. However, both need to be distinguished because they require different treatments. CS vegetation, including infective endocarditis or septic thrombophlebitis, has been reported in 13 cases, including our case (Table 1)[4,7-17]. According to these cases, patients with CS vegetation mainly had symptoms and signs of infection, such as fever and leukocytosis, and had typical imaging or pathologic findings involving the CS. In rare cases[7,14], blood culture results were negative; however, pathogens were identified on tissue culture. The major pathogen was Staphylococcus aureus (four in infective endocarditis cases and three in septic thrombophlebitis) which is associated with complicated clinical courses, including huge vegetation, destructive abscess and fistulation, and septic embolization[3]. Indeed, five (71%) of the seven cases with Staphylococcus aureus infection underwent surgery or died suddenly. Patients with complex CS vegetation, including septic embolism and tissue destruction leading to heart failure, underwent surgery or died before treatment, while patients with isolated CS vegetation without complications recovered with only antibiotics. Septic thrombophlebitis has both characteristics of thrombosis and infection of the CS. It was fatal when there was acute mechanical obstruction of the CS[14,15]. Similar to CS vegetation, spontaneous CS thrombosis without iatrogenic injury has been reported in less than 15 cases. CS thrombosis mostly occurred in conditions leading to a static status of the right atrium, including atrial fibrillation[18-21], right heart failure with severe pulmonary hypertension[18,19,22,23], or hypercoagulable conditions such as severe inflammation/infection[20,24-26] and malignancy[27]; this presentation is similar to that of thrombosis at other sites. Patients with CS thrombosis primarily have symptoms and signs associated with partial or complete obstruction of the CS, but no symptoms and signs of infection. For example, chest pain, ST-segment elevation[28], or hemodynamic collapse and subsequent sudden death[22,24,25,27] have been reported. CS thrombosis with complete obstruction required emergency surgery[19,26]; however, thrombosis without obstructive signs responded to anti-coagulation therapy[18,20].

Although vegetation or thrombosis of the CS is confirmed based on histopathological findings, echocardiography is the best imaging technique for screening. However, minor structures of the right heart, such as the CS and Chiari network, are sometimes overlooked during echocardiography. This might be one of the reasons why cases were rarely reported. In our case, infective endocarditis was not suspected before echocardiography because typical microorganisms did not grow in blood cultures, and only non-specific hypotension and mild elevation of C-reactive protein and procalcitonin levels were observed without typical infection signs. In fact, echocardiography was performed to screen for cardiogenic shock, and CS vegetation was incidentally observed. We immediately started broad-spectrum antibiotics for infective endocarditis and found no vegetation on the follow-up echocardiography. If the echogenic mass had continued to increase, it might have caused other clinical problems due to mechanical obstruction or destruction of structures adjacent to the CS. Although immediate treatment with antibiotics did not alter the prognosis of this patient, early detection of CS vegetation is essential for appropriate management.

The mortality rate of RIE including CS endocarditis[4] is considered to be lower than that of left-sided infective endocarditis (LIE)[3]. However, a high proportion (60%-80%) of intravenous drug users, who generally display a benign clinical course, might account for the good prognosis of RIE in previous studies[29,30]. Indeed, recent studies that enrolled patients with no history of intravenous drug use or with cardiac devices showed similar in-hospital mortality rates between RIE and LIE[31,32]. Furthermore, hemodialysis patients with inherently impaired immune systems are highly susceptible to bacteremia and septic shock. In our case, the patient died because his immune systems were impaired due to old age, chronic renal impairment, fragility, and severe infection. Moreover, the diagnosis of infective endocarditis was delayed due to atypical symptoms. His negative blood culture results might also be associated with poor outcome because it made antibiotic selection difficult.

The diagnosis and treatment of infective endocarditis in hemodialysis patients is challenging. Clinical manifestations, including fever and leukocytosis, may be atypical because of impaired cellular host defense; thus, diagnosis or management of infective endocarditis may be delayed[2]. Indwelling intravascular catheters may be a primary source of pathogens; however, removal of the catheter is not always possible or necessary[2]. Infective endocarditis caused by methicillin-resistant Staphylococcus aureus is a common clinical entity. However, empirical use of vancomycin before the isolation of microorganisms should be determined carefully because vancomycin has a slower bactericidal effect on methicillin-susceptible Staphylococcus aureus compared to beta-lactam antibiotics[2,33].