MET fusion is a key driver mutation, but it is rare in gastric cancer (GC). Several MET (hepatocyte growth factor receptor) inhibitors have been approved for the treatment of MET-positive patients, but the tumor response is heterogeneous. With the development of next-generation sequencing, diverse MET fusion partner genes have been identified. We herein report a fusion variant involving KIF5B-MET in GC.

After thoracoscopic inferior lobectomy plus lymph node dissection under general anesthesia, a “tumor within a tumor” was found in the lung tumor tissue of a 64-year-old non-smoking male patient. Combining the medical history and the results of enzyme labeling, the focal area was considered to be GC. To seek potential therapeutic regimens, an intergenic region between KIF5B and MET fusion was identified. This fusion contains a MET kinase domain and coil-coiled domains encoded by KIF5B exons 1-25, which might drive the oncogenesis.

Our finding could extend the spectrum and genomic landscape of MET fusions in GC and favor the development of personalized therapy.

Core Tip: In this case report, we report the discovery of a "tumor within a tumor " in the lung tumor tissue of a 64-year-old non-smoking male patient. Combined with the medical history and the results of enzyme labeling, the focal area of the postoperative pathology was considered to be gastric cancer. To seek potential therapeutic regimens, an intergenic region between KIF5B and MET fusion was identified, which contains a MET kinase domain and a coil curl domain encoded by KIF5B exons 1-25, which may drive the tumorigenesis.

Gastric cancer (GC) is one of the most common malignancies[1]. The incidence and mortality of GC vary by region, but more than 50% of cases occur in East Asia[2]. GC is responsible for 10.6% of new cases and 13.6% of cancer-related deaths in China[3]. Targeted therapies designed to disrupt the activity of specific oncogenic signaling pathways have recently emerged as a promising therapeutic strategy in GC, such as the ToGA trial. Trastuzumab and ramucirumab improved the overall survival of patients by targeting the HER-2 and VEGFR genes[4,5].

MET proto-oncogene receptor tyrosine kinase is a high-affinity proto-oncogene receptor tyrosine kinase that, upon activation, drives oncogenic pathways involved in cell proliferation, survival, and metastasis. As one of the major MET variants, MET fusion is a key driver mutation. The common fusion proteins are derived from chromosomal translocations, which are usually composed of N-terminal dimerization domains provided by the kinase domains to which fusion partner proteins fuse to tyrosine kinases. These fusion mutations often lead to the activation of the kinase domain and provide ideal targets for the development of anticancer therapies[6]. With the development of next-generation sequencing (NGS), diverse MET fusion partner genes, such as ETV6-MET[7], PTPRZ1-MET[8], and CD74-MET, have been identified[9]. MET gene fusion is a relatively rare but promising molecular target for individualized targeted therapies. Herein, we report a novel intergenic region between KIF5B and MET fusion in a patient with GC.

A 64-year-old male patient was admitted to Jingjiang Peoples’ hospital due to nodules in his right lower lung.

The patient underwent subtotal gastrectomy for GC 15 years ago, and was diagnosed with gastric adenocarcinoma by postoperative pathology. Adjuvant chemotherapy was given after operation (details are not available). During this period, the condition has been stable.

There was no abnormality in cardiopulmonary and abdominal examinations.

Blood analysis did not reveal raised levels of tumor markers.

After admission, chest CT (April 18, 2019) showed irregular patchy shadows in the lower lobe of the right lung, local thickening of the bronchial wall, and narrowing of the lumen, which was slightly denser than that 2 years ago (Figure 1A). 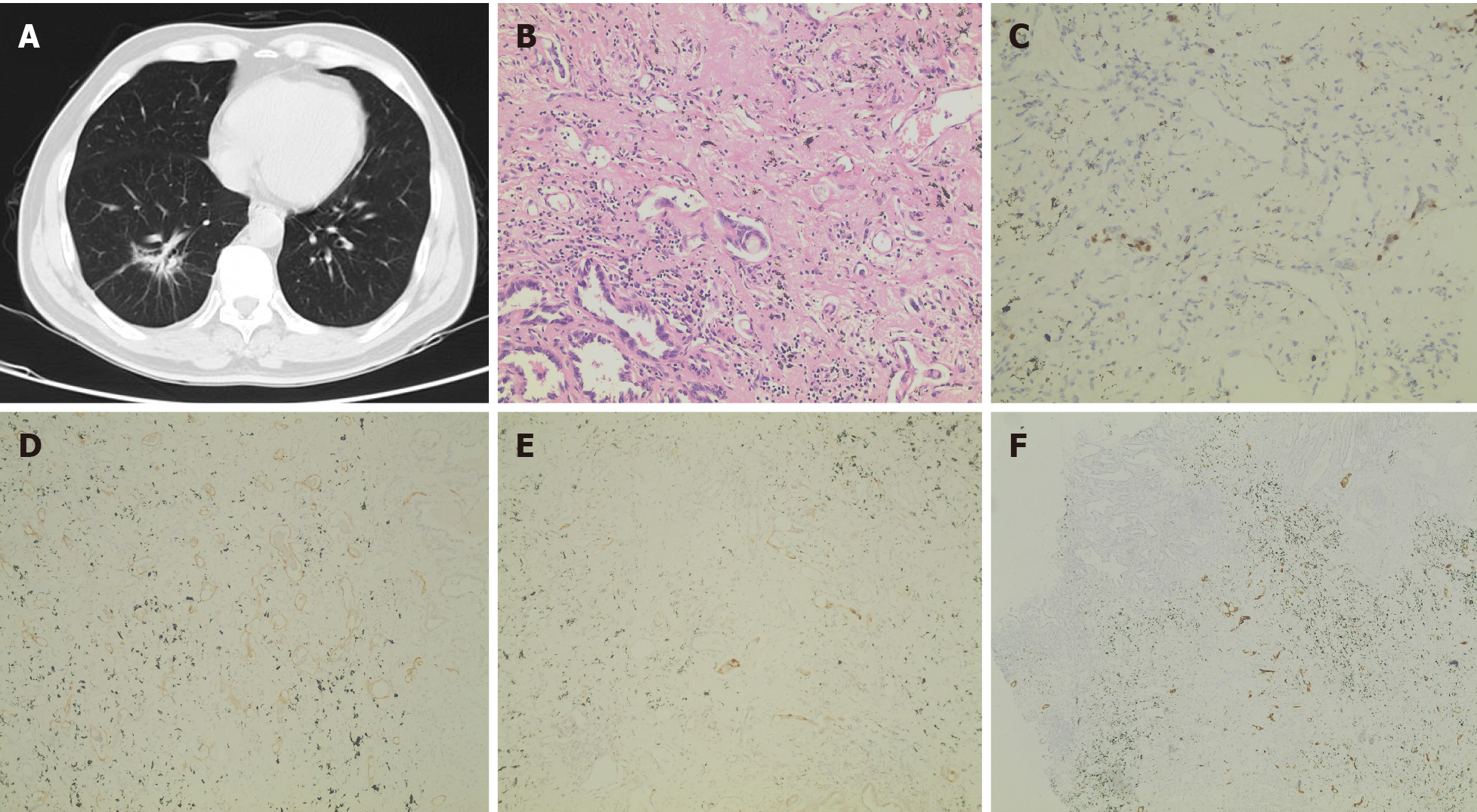 The patient underwent thoracoscopic inferior lobectomy plus lymph node dissection under general anesthesia on April 26, 2019. Postoperative pathology revealed that the heterotype glands in the focal area were significantly different from the main tumor body, the cytoplasm was rich in mucus, and most of the tumor cells were located in lymphatics (Figure 1B). Combining the medical history and the results of immunohistochemical staining [Ki67 (+), D2-40 (+), MUC5AC (+), and Villin (+)] (Figure 1C-F), it was considered that the focal area was GC. This lesion collided with the main tumor body, which was described as a "tumor within a tumor". The tumor size was 2.2 cm × 1.5 cm × 1.0 cm. Metastasis was found in 14/15 lymph nodes, including 3/3 parabronchial lymph nodes, 7/7 group 7 lymph nodes, and 4/5 group 11 lymph nodes. All lymph node metastases were morphologically consistent with the origin of gastric adenocarcinoma.

To probe the genomic profile of the tumor for targeted therapy, the tissue specimens were subjected to NGS analysis, and an intergenic region between KIF5B and MET fusion was identified (Figure 2A). The fusion of KIF5B-MET included exons 1-25 of KIF5B and exons 15-21 of MET, and the complete kinase structure of the MET (hepatocyte growth factor receptor) protein was retained (Figure 2B). The mutant allele frequency was 15.24%. No other driver gene variants were found. 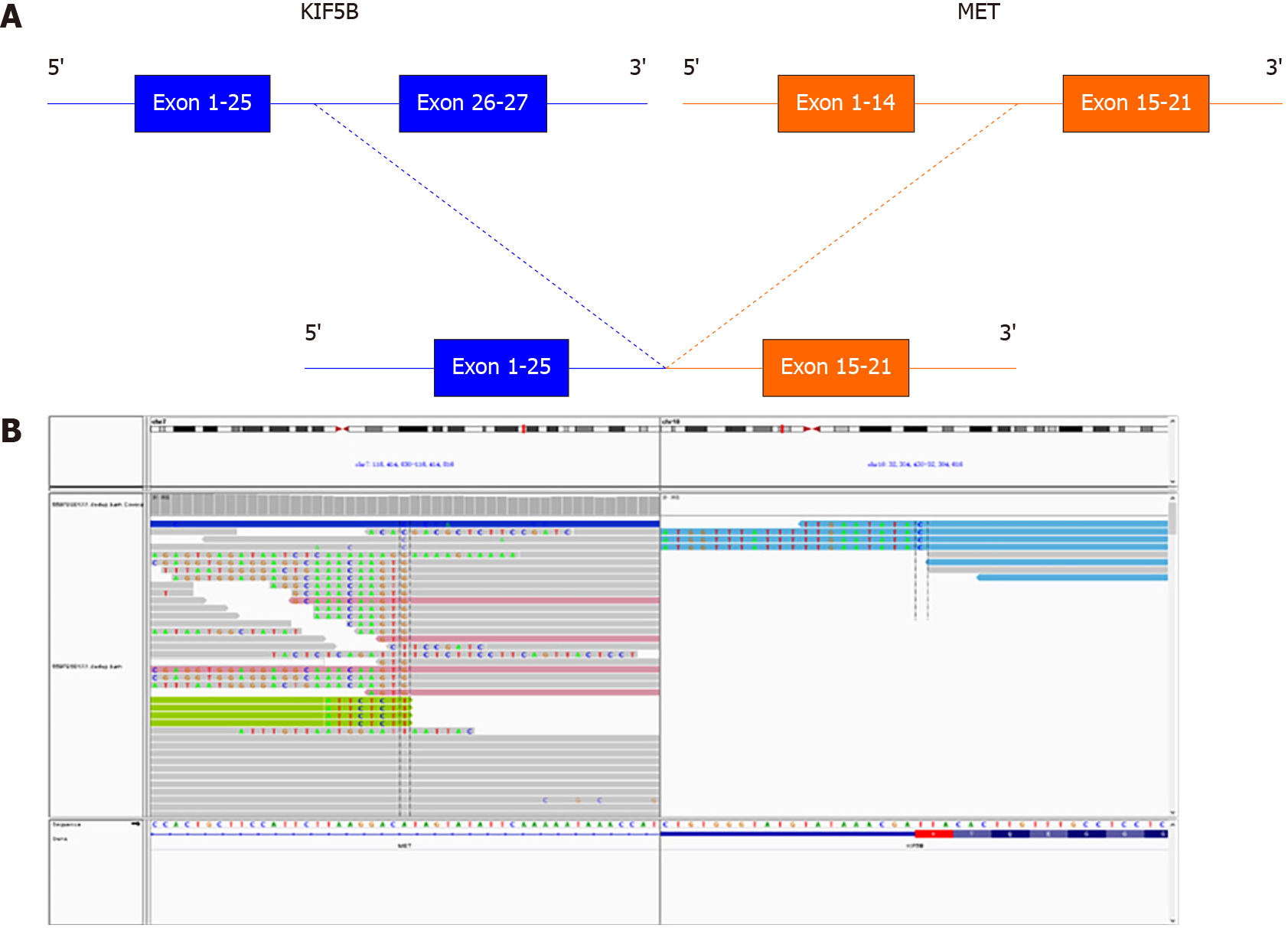 The patient took three courses of tegafur monotherapy on July 2, July 23, and August 13, 2019, with grade II gastrointestinal reaction. Then he developed right pleural effusion and were treated by thoracic catheter drainage on November 4, 2019. The carcinoembryonic antigen (CEA) level of pleural effusion was 423.4 ng/mL, which was significantly increased, suggesting it was tumor related, but no cancer cells were found in the pleural effusion exfoliative cell examination. In January 2020, the patient developed cough, expectoration, and shortness of breath. He went to Shanghai for positron emission tomography/CT examination, which revealed that there was dense shadow in right lower hilar with fluorodeoxyglucose (FDG) metabolism increased; the right pleural and peritoneal thickening with FDG metabolism increased, metastasis possible; the left lower abdominal wall metastasis possible; pleural, abdominal and pelvic effusion on both sides. The epithelioid cells in pleural effusion had a larger nucleocytoplasmic ratio and obvious nucleoli. The cells in paraffin section were arranged in an adenoid pattern and considered as adenocarcinoma according to the hematoxylin-eosin staining.

Unfortunately, the patient's cough and shortness of breath gradually worsened and he died of respiratory failure in February 2020.

MET fusions are rare in GC, and this is the first documented case of a patient with an MET fusion-positive tumor. We identified a fusion variant involving KIF5B-MET, and the variant was the same as the most recently reported KIF5B-MET fusion variant in non-small cell lung cancer[10]. This fusion gene was initially reported in one of 513 lung adenocarcinoma samples[11]. Although several MET inhibitors have been approved for the treatment of MET-positive patients, the tumor response is heterogeneous, and the overall survival ranges from 1 mo to 36 mo[10,12,13]. One explanation is that the response of different MET fusion types to MET inhibitors differs. Other possible reasons include the existence of other driver mutations or primary resistance mutations in the kinase structure of the MET protein. Therefore, it seems necessary to comprehensively understand MET fusion information, and NGS could serve as a supplementary approach for MET status detection because of its high-throughput molecular analysis that can detect gene copy number alterations, deletions, insertions, and fusions simultaneously.

To the best of our knowledge, this is the first report of breakpoints coexisting simultaneously in the intergenic region between the KIF5B gene and the MET gene, as well as a novel MET rearrangement in GC. This fusion contains a MET kinase domain and coil-coiled domains encoded by KIF5B exons 1-25, which might drive the oncogenesis. Given the recent development of several MET inhibitors and their potential therapeutic efficacy for tumors expressing the KIF5B-MET fusion protein, we expect that further investigation of KIF5B-MET fusions will enable us to identify GC patients suitable for this targeted therapy.