Crumbs homolog 2 (CRB2) is a recently discovered gene that is closely related to the maintenance of normal polarity in podocytes; mutations can directly lead to steroid-resistant nephrotic syndrome (SRNS). However, the characteristics of nephrotic syndrome (NS) caused by CRB2 mutations have not been described.

We report a novel compound heterozygous mutation of the CRB2 gene in two siblings with SRNS. The two siblings had edema, proteinuria, hypoproteinemia and hyperlipidemia. Both their father and mother had normal phenotypes (no history of NS). Whole exon sequencing (WES) of the family showed a novel compound heterozygous mutation, c.2290 (exon 8) C > T and c.3613 (exon 12) G > A. Glucocorticoid therapy (methylprednisolone pulse therapy or oral prednisone) and immunosuppressive agents (tacrolimus) had no effect. During a 3-year follow-up after genetic diagnosis by WES, proteinuria persisted, but the patient was healthy.

CRB2 mutations related to SRNS often occur in exons 7, 10, and 12. Clinical manifestations of SRNS caused by CRB2 mutations are often less severe than in other forms of SRNS.

Core Tip: Crumbs homolog 2 (CRB2) mutation is related to early-onset steroid-resistant nephrotic syndrome (SRNS). We here report two siblings with a novel compound heterozygous CRB2 mutation. We also reviewed the literature and found that CRB2 mutations related to SRNS often occur in exons 7, 10 and 12. Clinical manifestations of SRNS caused by CRB2 mutations, such as edema, are often less severe than in other forms of SRNS.

Primary nephrotic syndrome (NS) is a common urinary system disease in children. According to its sensitivity to corticosteroids, it can be divided into steroid-sensitive and steroid-resistant NS (SRNS). The majority of children with NS are sensitive to steroids and have a good prognosis, but 10%–20% of them have SRNS, and 30%-40% of children with SRNS progress to end-stage renal disease (ESRD) within 10 years[1]. Studies of primary NS confirm the importance of genetic testing to find mutations. A number of studies have shown that some cases of SRNS are caused by mutations of genes encoding glomerular podocyte cytoskeletal proteins. NS with gene mutations is now called hereditary NS. So far, more than 20 different single-gene mutations such as WT1, NPHS1, NPHS2 and PLCE1[2-5] have been reported to cause SRNS, and those mutations are the cause of most hereditary NS.

Podocytes are highly polarized and specialized cells that play an important role in renal glomerular filtration. Many gene mutations affecting the kidneys are related to podocyte proteins, such as mutation of the Crumbs homolog 2 (CRB2) gene. CRB2 belongs to the Crumbs family, which includes CRB1, CRB2 and CRB3. The latter two are found in mammals[6]. The CRB2 gene is located on chromosome 9q33.3, consists of 13 exons, and encodes a 1285 amino acid transmembrane protein. It is a recently discovered gene that is closely associated with SRNS, prenatal onset ventriculomegaly, and retinitis pigmentosa. By characterization of a loss-of-function mutation in zebrafish crb2b, Ebarasi et al[7] demonstrated that the CRB2 gene is important for correct podocyte foot process arborization, slit diaphragm formation, and proper nephrin trafficking[7]. It may be that different manifestations are related to the location of the mutation.

This report describes two siblings diagnosed with SRNS and carrying a novel compound heterozygous mutation of CRB2 gene that was inherited from their parents. We reviewed the literature on CRB2 gene mutations reported in recent years, summarize their clinical manifestations, pathology and management; and suggest corresponding exon mutations related to NS.

Case 1: An 11-year-old girl presented with repeated edema of the eyelids and lower extremities for > 9 years. She had been taking oral prednisone, tripterygium, and dipyridamole without regular follow-up.

Case 2: A 9-year-old boy, who is the younger brother of case 1, was admitted to hospital with the chief complaint of repeated proteinuria for > 5 years. Eyelid edema appeared at the onset of the disease. He was diagnosed with NS 1 year before and was started on long-term oral steroid therapy, but there was no significant improvement in his proteinuria.

Both cases had no history of significant past illnesses.

Their parents had normal phenotypes and had no history of NS. Their father and grandfather had histories of renal calculi.

Case 2: The patient presented with slight swelling of the eyelids. 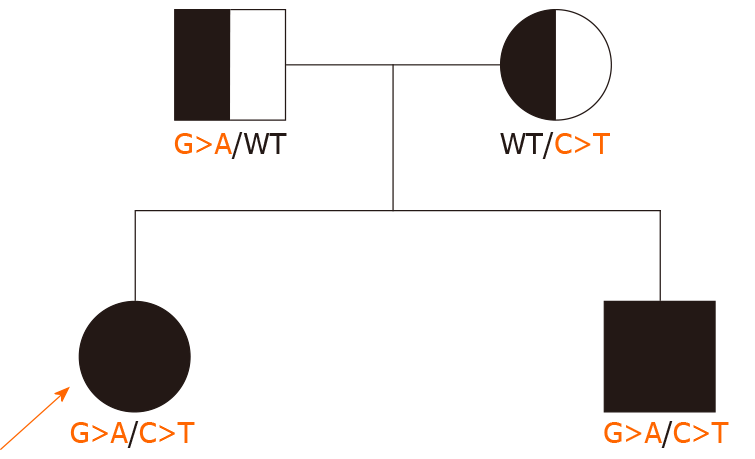 Figure 1 Family pedigree indicating a compound heterozygosity for Crumbs homolog 2 mutations. Parents were unrelated. Genotype is indicated beneath each individual. Mutant alleles are shown in red: c.2290C>T and c.3613G>A.

Figure 2 Whole exon sequencing of Crumbs homolog 2 gene mutations in the two siblings and their parents. The nucleotide exchange is marked by an arrow.
FINAL DIAGNOSIS

During a 3-year follow-up, their proteinuria and mild edema persisted; the girl underwent surgery for hormone-related glaucoma.

NS is a common kidney disease in childhood. Although most cases are sensitive to steroids, 10%-20% of them are resistant, and 30%-40% of children with SRNS will develop ESRD within the next 10 years. Genetic diagnosis is important in SRNS and can avoid excessive use of steroids and immunosuppressants, thereby preventing adverse effects such as infection and cytotoxicity and improving quality of life. SRNS with a monogenic cause is known as hereditary NS[8], which can result in an isolated glomerular disease or syndrome with renal and extrarenal manifestations. Genes encoding podocyte proteins play an important role, such as WT1, NPHS1, PLCE1, CRB2, LAMB2, EXT1 andCOL4A5[9].

There are a few clinical reports of NS caused by CRB2 gene mutation. CRB2 is a recently discovered gene that is closely related to the maintenance of normal podocyte polarity, and its mutation can directly lead to SRNS[10]. The family of Crumbs proteins including CRB1, CRB2 and CRB3, includes human homologs of drosophila Crb and plays a key role in the establishment and maintenance of epithelial polarity[11]. Katoh and Kotah[13] first identified CRB2, localized on 9q33.3, consisting of 13 exons and encoding 1285 amino acid transmembrane protein, containing large extracellular domains with epidermal growth factor[13,14]. Ebarasi et al[7] suggested that in zebrafish, crb2b has important effects on the correct podocyte foot process arborization, slit diaphragm formation, and proper renin trafficking[7]. The CRB2-null zebrafish presents with pronephric cysts, pericardial edema and smaller eyes, which demonstrates that the CRB2 gene mutation can cause the corresponding loss-of-function of podocytes, and that CRB2 mutations in humans can lead to NS. Jaron et al[15] presented two cases with ventriculomegaly and hydronephrosis and concluded that CRB2-associated disease is a new ciliopathy[15]. CRB2 is a member of the Crumbs family of proteins implicated in planar cell polarity and is highly expressed in brain, retina and kidney[14]. CRB2 missense mutation of different domains can lead to different clinical manifestations, and exons related to SRNS include 7, 10 and 13[7,16]. The CRB2 gene has 13 exons in total, and mutation of this gene can cause NS, hydrocephalus, and retinitis pigmentosa. Whether a patient with CRB2 gene mutation presents with NS, hydrocephalus or retinitis pigmentosa depends on the mutation sites. In the literature review, we found that CRB2 mutations related to SRNS often occur in exons 7, 10 and 12 (Figure 3).

For children with CRB2 mutations, treatment is difficult. A Japanese girl reported by Udagawa et al[17] was unresponsive to corticosteroids, immunosuppressants, and rituximab[17]. Fan et al[18] suggested that high-dose methylprednisolone pulses and cyclosporine were effective[18]. Watanabe suggested presumptive podocyte-protective therapy including low-dose tacrolimus and angiotensin receptor blocker[10]. The two siblings in our report presented with SRNS, and immunosuppressive agents had no effect. In a 2-year follow-up, proteinuria remained, along with slight edema. Judging from the SRNS cases reported above as well as the two siblings reported here, although proteinuria is difficult to control in NS caused by CRB2 mutation, the patients looked healthy and their renal function remained normal during 2–16.5 years of follow-up. Thus, it may be that in SRNS patients with CRB2 mutations, regular follow-up is more important than treatment with corticosteroids and immunosuppressant agents, which may induce adverse effects such as infection, short stature, and glaucoma.

CRB2 gene is related to early-onset SRNS. We report two siblings with a novel compound heterozygous CRB2 mutation. In the literature review, we found that CRB2 mutations related to SRNS often occur in exons 7, 10 and 12. Unlike other forms of SRNS caused by genetic mutations, clinical manifestations of SRNS caused by CRB2 mutations, such as edema, are often less severe, but proteinuria is difficult to control. Regular follow-up is more important than drug therapy (e.g., corticosteroids and immunosuppressant agents). As more cases are reported, more information about the disease will be gathered and more appropriate treatments will be found.