Osimertinib is the recommended first-line treatment for adult patients with epidermal growth factor receptor (EGFR) mutation positive advanced or metastatic non-small cell lung cancer (NSCLC). However, primary or acquired resistance to EGFR-tyrosine kinase inhibitors (EGFR-TKIs) seems inevitable, and when drug-resistance occurs during treatment with osimertinib, the standard of care is to discontinue the TKI.

A 57-year-old female patient with lung adenocarcinoma presented with an irritating cough accompanied by chest distress of one month duration. An enhanced head magnetic resonance imaging scan showed brain metastases. An EGFR mutation (exon 21 L858R) was detected in pleural fluid. The patient was treated with oral osimertinib (80 mg once daily) from January 2018 but developed progressive disease on December 2018. She was then successfully treated with re-challenge and tri-challenge with osimertinib (80 mg once daily) by resensitization chemotherapy twice after the occurrence of drug-resistance to osimertinib, and to date has survived for 31 mo.

This case may provide some selective therapeutic options for NSCLC patients with acquired drug-resistance who were previously controlled on osimertinib treatment.

Core Tip: Osimertinib is the first-line recommended treatment for adult patients with epidermal growth factor receptor mutation positive advanced or metastatic non-small cell lung cancer. Once drug-resistance occurs in osimertinib, the standard of care is to discontinue the tyrosine kinase inhibitor. To the best of our knowledge, this is the first report of successful re-challenge and tri-challenge with osimertinib administered via multiple re-sensitization chemotherapy protocols. This case provides a useful reference for prolonging the efficacy of osimertinib.

With well-established beneficial outcomes in clinical trials, osimertinib, an irreversible epidermal growth factor receptor tyrosine kinase inhibitor (EGFR-TKI), which is selective for both EGFR sensitizing mutations and T790M resistance mutations, has been approved as the standard regimen for patients with non-small cell lung cancer (NSCLC) harboring sensitive EGFR mutations[1]. However, acquired resistance to osimertinib has greatly limited its clinical application, which is a challenging problem with only a few proposed solutions. EGFR-TKI retreatment may be an option to overcome first-generation drug resistance, which has not been tested with osimertinib. Here, we report a patient with lung adenocarcinoma and brain metastasis, who was successfully treated by re-challenge and tri-challenge with osimertinib through multiple sensitization chemotherapy protocols after the occurrence of drug resistance to osimertinib. To date, the patient has survived for 31 mo. These findings may provide some selective therapeutic options for NSCLC patients with acquired drug-resistance who were previously controlled with osimertinib.

A 57-year-old woman presented to the outpatient department of our hospital complaining of an irritating cough accompanied by chest distress on December 23, 2017.

In November 2017, the patient developed an irritating cough without obvious inducement, progressive chest tightness and shortness of breath with loss of body weight, no fever and no obvious headache.

Her past medical history was unremarkable.

No specific personal or family history of disease was recorded.

Her mental state was not good. Superficial lymph nodes were not affected, heart auscultation was normal, but breath sounds disappeared in the right lower lung. Liver and spleen were not enlarged and edema in the lower limbs was not observed.

A chest computed tomography (CT) scan showed irregular high-density lesions in the upper lobe and middle lobe of the right lung, along with multiple enlarged lymph nodes in the mediastinum and effusion in the right thorax. The boundary of the largest lesion, which measured about 37.2 mm × 17.8 mm, was not clear (Figure 1A). Furthermore, an enhanced head magnetic resonance imaging scan showed a metastatic neoplasm on the right parietal lobe of the brain (Figure 1B).

The patient was diagnosed with lung adenocarcinoma and multiple lymph nodes, pleura and brain metastases. According to the 8th edition of the tumor, node and metastasis classification of lung cancer, the patient was classified as having cT4N2M1b, Stage IVA.

Osimertinib (80 mg once daily) was started at the beginning of January 2018, as first-line therapy due to the presence of brain metastasis. During treatment, reexamination of serum tumor markers and a further CT scan showed reduced foci (Figure 1C), and decreased CA199 and CEA levels, which suggested that the treatment was effective. After 5 mo of treatment, the brain metastatic lesion disappeared (Figure 1D) and multiple foci in the lung were reduced, indicating the clinical benefit of osimertinib. At that time, there were no new neoplasms in the right pleura (Figure 2A). However, in December 2018, a lung CT scan showed multiple new foci in the right pleura, indicating further progressive disease (PD) (Figure 2B). A plasma ctDNA analysis using the ARMS polymerase chain reaction (PCR) method was performed and the result showed that the EGFR mutation had disappeared. Osimertinib was then discontinued, and three cycles of pemetrexed plus cisplatin chemotherapy were administered. In March 2019, the primary foci were stable, but the pleural metastatic lesions had enlarged and increased slightly (Figure 2C). A second plasma ctDNA analysis using the ARMS PCR method was carried out and showed the emergence of the EGFR L858R mutation again. Therefore, a second administration of osimertinib was prescribed as third-line therapy (re-challenge). After 2 mo of administration, the pleura foci almost disappeared (Figure 2D), indicating the success of re-sensitization chemotherapy and the effectiveness of osimertinib. In September 2019, the pleural metastatic lesions began to enlarge again (Figure 2E), suggesting the reappearance of drug resistance to osimertinib. The patient refused further gene detection. As a result, osimertinib was again discontinued, and two cycles of chemotherapy with albumin-bound paclitaxel plus cisplatin once every 3 wk was administered instead. However, although the primary lesion remained stable, new lesions continued to appear on the right pleura (Figure 2F). Osimertinib (80 mg once daily) was given for the third time (tri-challenge) as fifth-line therapy on October 14, 2019. After 40 d, regular chest CT scanning showed that the pleural lesions had disappeared again (Figure 2G and H), the primary foci were stable, and the metastatic brain lesion did not recur.

Figure 2 Chest computed tomography scans from October 2018 to November 2019 . A: Baseline image of the right pleura in October 2018; B: New foci in the pleura showed progressive disease in December 2018; C: The pleural metastatic lesions enlarged and increased in March 2019; D: The pleura foci almost disappeared after 2 mo of retreatment with osimertinib in May 2019; E and F: Secondary enlargement and increase of metastatic pleural foci in September and October 2019; G and H: The neoplasms disappeared again after 40 d tri-challenge with osimertinib in December 2019.
OUTCOME AND FOLLOW-UP

Treatment outcome suggested that multiple osimertinib administrations followed by chemotherapy in this patient with advanced lung adenocarcinoma and acquired resistance improved survival. The patient feels good, has no symptoms and is still currently receiving osimertinib treatment. To date, overall survival (OS) in this patient is 31 mo. The entire treatment course with fluctuations in CEA is shown in Figure 3. 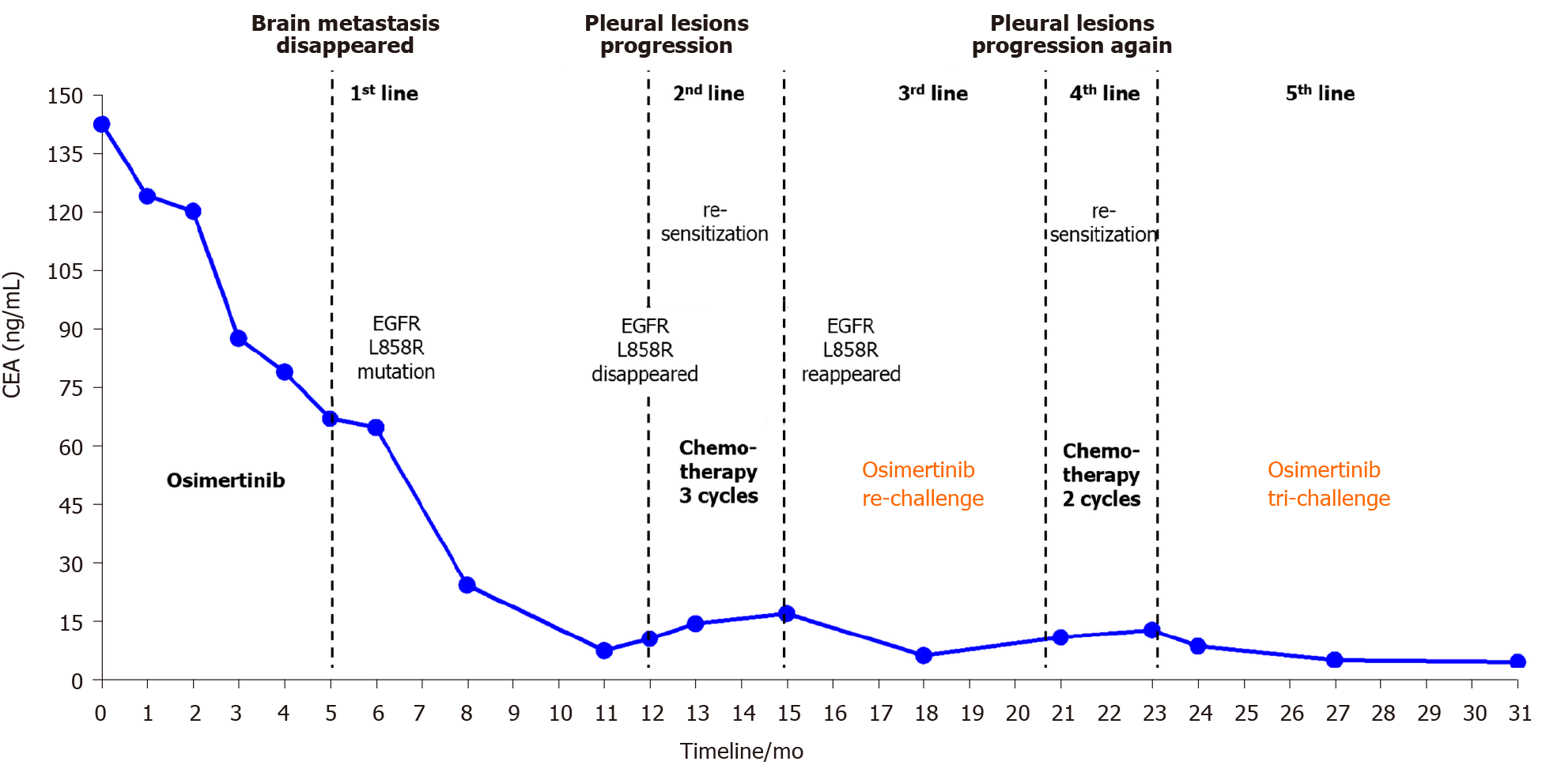 EGFR-TKI has become the standard treatment choice for NSCLC patients with EGFR sensitive mutations, and the emergence of the third-generation EGFR-TKI, osimertinib, has effectively prolonged progression-free survival (PFS) in NSCLC patients[3]. However, EGFR-TKI drug resistance is difficult to avoid. Therefore, clinical oncologists are facing a challenge to effectively overcome drug resistance to osimertinib. Some retrospective studies[4-7] and a prospective study with a small cohort[8] noted that EGFR-TKIs could regain effectiveness when applied after one or several cycles of chemotherapy and following the appearance of drug resistance in the treatment of advanced NSCLC. The interval between the use of EGFR-TKIs is also called a “drug holiday” by some scholars. In these studies, erlotinib benefited the survival of some NSCLC patients who had received second-line chemotherapy after progression post-gefitinib treatment. The re-challenge with erlotinib extended the median OS (mOS) after treatment to 14.6 mo, and the patients who had achieved a partial response with previous gefitinib treatment benefited more[9]. In addition, in a retrospective study involving a large cohort, following the occurrence of drug resistance after the administration of first- or second-generation EGFR-TKIs (gefitinib, erlotinib and afatinib), NSCLC patients with EGFR mutations received re-sensitization chemotherapy and were then retreated with these EGFR-TKIs. In that study, the objective response rate (ORR) and disease control rate (DCR) were 7.3% and 44.4%, respectively, and median PFS (mPFS) and mOS were 4.1 and 12.6 mo, respectively. Moreover, in the subgroup analysis, the patients with an interval of ≥ 7 mo between two targeted treatments and female patients with an exon21 mutation were found to be the dominant populations responding to re-challenge treatment[7]. In the latest multicenter, prospective phase II study, following the failure of first-line treatment with gefitinib, at least four cycles of dual drug chemotherapy with platinum were given and then third-line treatment with gefitinib was administered again. It was found that the predefined DCR was achieved in 69.8% of patients and an ORR was observed in 4.7% of patients. mPFS was 4.4 mo and mOS was 10.3 mo. Baseline T790M-negative patients achieved a favorable DCR, mPFS and mOS compared with T790M-positive patients[8]. All the above studies strongly suggest that re-challenge with EGFR-TKIs should be included as an important part of the whole management process for EGFR mutation positive NSCLC patients.

Several models have been used to explain the phenomenon of re-sensitization followed by chemotherapy after EGFR-TKIs resistance. The selection stress model is one of the most convincing models. EGFR mutant cancer cells actively proliferate and have a growth advantage in the heterogeneous tumor cell population before EGFR-TKIs treatment. However, due to their high sensitivity to EGFR-TKIs treatment, most of the EGFR mutant cells will be removed during the first round of EGFR-TKIs treatment, while the few remaining cells with resistance to EGFR-TKI will gradually become the dominant population, leading to the development of EGFR-TKI resistance. On the other hand, chemotherapy does not inhibit tumor growth by suppressing the EGFR pathway, but inhibits cancer cell division by cytotoxicity. At this time, the discontinuation of EGFR-TKIs treatment along with the administration of chemotherapy will have a significant impact on the EGFR-TKI resistant cell population. The sensitivity to EGFR-TKI could then be restored without EGFR-TKI selection stress. Consequently, lung cancer cells will be inhibited by EGFR-TKIs again[12]. This theory has been proved in the targeted treatment of colon cancer, as third-line treatment with repeated cetuximab benefited 54% of the patients with RAS and BRAF wild-type metastatic colorectal cancer who acquired resistance to first-line cetuximab and irinotecan[13]. The results of gene analysis using plasma or pleural fluid samples from our patient also validated this theory. Before the first administration of osimertinib, an EGFR exon21 L858R mutation was present. Then at the first PD after twelve months, the mutation was not found on ctDNA analysis. This may reflect that EGFR mutant cancer cells were no longer the dominant population. However, with discontinuation of osimertinib treatment along with several cycles of chemotherapy, the same mutation appeared again in plasma and osimertinib treatment was successful once more. This may explain why the second osimertinib administration succeeded again. Unfortunately, the patient refused subsequent genetic testing during the third osimertinib treatment, and this prevented us from obtaining more information for a deeper understanding of this phenomenon.

In summary, to the best of our knowledge, this is the first report of successful re-challenge and tri-challenge with osimertinib administered via multiple re-sensitization chemotherapy protocols. This case provides a useful reference for retreatment with osimertinib. We also look forward to further multi-center prospective studies with a larger sample size.