Early esophageal small cell carcinoma shows submucosal infiltrating growth with a hypoechoic mass in the muscularis mucosa as diagnosed by endoscopic ultrasonography. It is easily misdiagnosed as submucosal masses. Endoscopic manifestations should be identified and pathological biopsies should be employed. ESD may be performed to provide an opportunity for early treatment of PESCC.

Primary esophageal small cell carcinoma (PESCC) is a highly aggressive malignancy. Its detailed clinical behaviors have remained virtually unknown and the standard therapy has not been established. PESCC is thought to be rapidly progressive and highly metastatic with a poor prognosis[1,2]. It is difficult to diagnose at early-stage because the tumor was partially covered by a non-neoplastic squamous epithelium, and the diagnosis may be missed based on the findings of endoscopy or an endoscopic biopsy. Endoscopic submucosal dissection (ESD) is an advanced endoscopic technique that allows for the complete en bloc resection and possible cure of superficial esophageal neoplasms[3,4]. Here we report two such cases, in both of which endoscopic manifestations were a small submucosal mass. One case missed the best time for treatment, and neoplasia was detected by endoscopy 1 year later; the other case was identified with small early-stage PESCC, which was completely resected by ESD.

Case 1: A 62-year-old man visited our hospital due to epigastric pain for approximately 2 mo.

Case 2: A 68 year-old woman visited a local hospital due to epigastric pain for approximately 1 mo.

Cases 1 and 2: No specific history of present illness was reported.

Cases 1 and 2: No specific history of past illness was reported.

Case 1: The patient had an extensive smoking history of 20 years, with an average of 10 cigarettes/day, but no family history of genetic disease was reported.

Case 2: No specific personal or family history was reported.

Cases 1 and 2: There were no obvious abnormalities during the physical examination.

Cases 1 and 2: The routine blood parameters were unremarkable.

Case 1: Esophagogastroduodenoscopy (EGD) showed a 0.8 cm submucosal mass covered by a non-neoplastic epithelium in the distal esophagus (Figure 1A). Endoscopic ultrasonography showed a low echo nodule in the muscularis mucosa, with un-uniform internal echo and a clear boundary. The nodule appeared to have a capsule and the submucosa was smooth and continuous (Figure 1B and C). About 14 mo later, the patient had obvious difficulty in swallowing accompanied by chest pain. Esophagogastroduodenoscopy showed a protruding neoplasm with surface ulceration and invasion (Figure 1D). Biopsy and histopathology demonstrated small cell carcinoma, and immunohistochemical staining revealed: Syn (+), CgA (weakly +), CK (-), NSE (+), and CD56 (+). Computed tomography (CT) showed that the wall of the lower esophagus was thickened and the cardia was invaded.

Figure 1 Findings of endoscopic examination (Case 1). A: Esophageal submucosal tumors diagnosed by endoscopy; B: Endoscopic ultrasonography (20 MHz) showed a hypoechoic mass in the muscularis mucosa; C: The mass was about 6.8 mm × 3.6 mm in size; D: Neoplasia was detected by endoscopy 1 year later.

Case 2: EGD showed a 0.8 cm submucosal mass, with mucosal hyperemia and erosion observed on the surface of the tumor (Figure 2). Narrow band imaging showed that a portion of the depressed area was slightly brownish (Figure 2C). The hyperemic and erosive mucosa of the tumor was unstained after iodine staining (Figure 2D). Endoscopic ultrasonography (20 MHz) showed a hypoechoic mass in the muscularis mucosa invading the submucosal layer, and the submucosal layer was thinner than normal but still continuous (Figure 2E and F). Biopsy and histopathology showed small cell carcinoma. CT revealed neither lymph node nor distant metastasis. 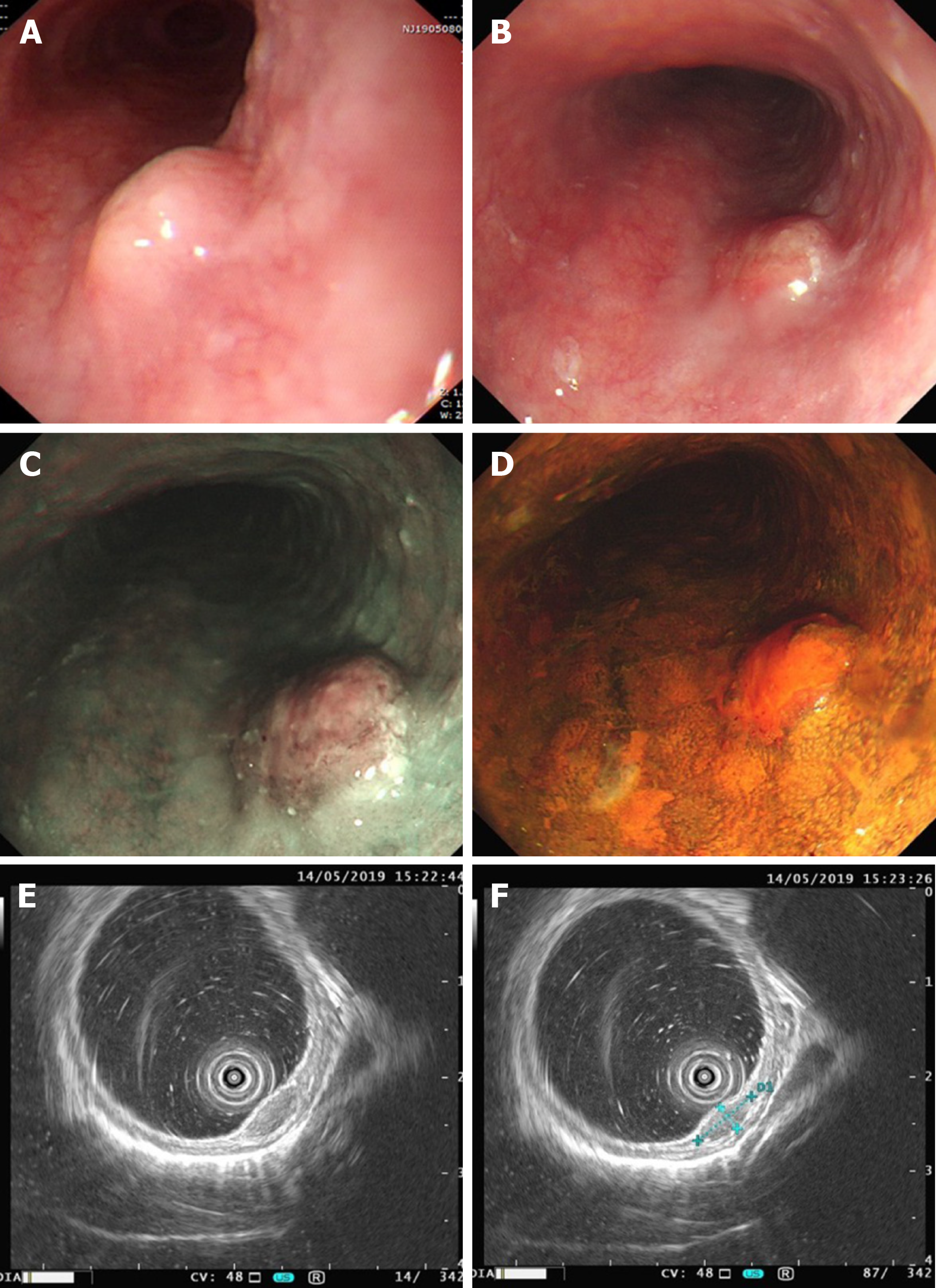 Figure 2 Findings of endoscopic examination (Case 2). A: An esophageal submucosal tumor diagnosed by endoscopy at a local hospital; B: Mucosal hyperemia and erosion on the surface of the tumor about 2 wk later; C: Narrowband imaging showed that a portion of the depressed area was slightly brownish; D: The hyperemic and erosive mucosa of the tumor was unstained after iodine staining; E: Endoscopic ultrasonography (20 MHz) showed a hypoechoic mass in the muscularis mucosa; F: The tumor was about 7.4 mm × 2.9 mm in size.
FINAL DIAGNOSIS

According to the endoscopic examination, histopathologic assessment, and CT examination, both patients were diagnosed with PESCC.

Endoscopic resection was recommended to the first patient, but he refused to undergo endoscopic resection. The patient was diagnosed with PESCC and underwent chemoradiotherapy 14 mo later. We diagnosed the second patient with small cell carcinoma, CT1bN0M0 according to the Union for International Cancer Control tumor/node/metastases classification for esophageal carcinoma[5]. Surgical resection was recommended. However, the patient declined the surgery and endoscopic submucosal dissection was performed. The gross findings of the resected specimen showed a nearly flat lesion with clear margins. Iodine staining indicated an unstained area in a part of the resected specimen (Figure 3A). The histopathological findings showed small cell carcinoma (Figure 3B and C). No vessel invasion or lymphatic permeation was observed in the submucosa. Immunohistochemical analysis revealed that synaptophysin\chromogranin A and CD56 were positive (Figure 3E), as well as a Ki-67 index of 80% (Figure 3F). The horizontal margin was negative, but the tumor infiltrated the entire submucosal layer in the resected specimen. The patient accepted additional surgical resection. The postoperative histopathological findings showed no residual tumor and the lymph node was negative. 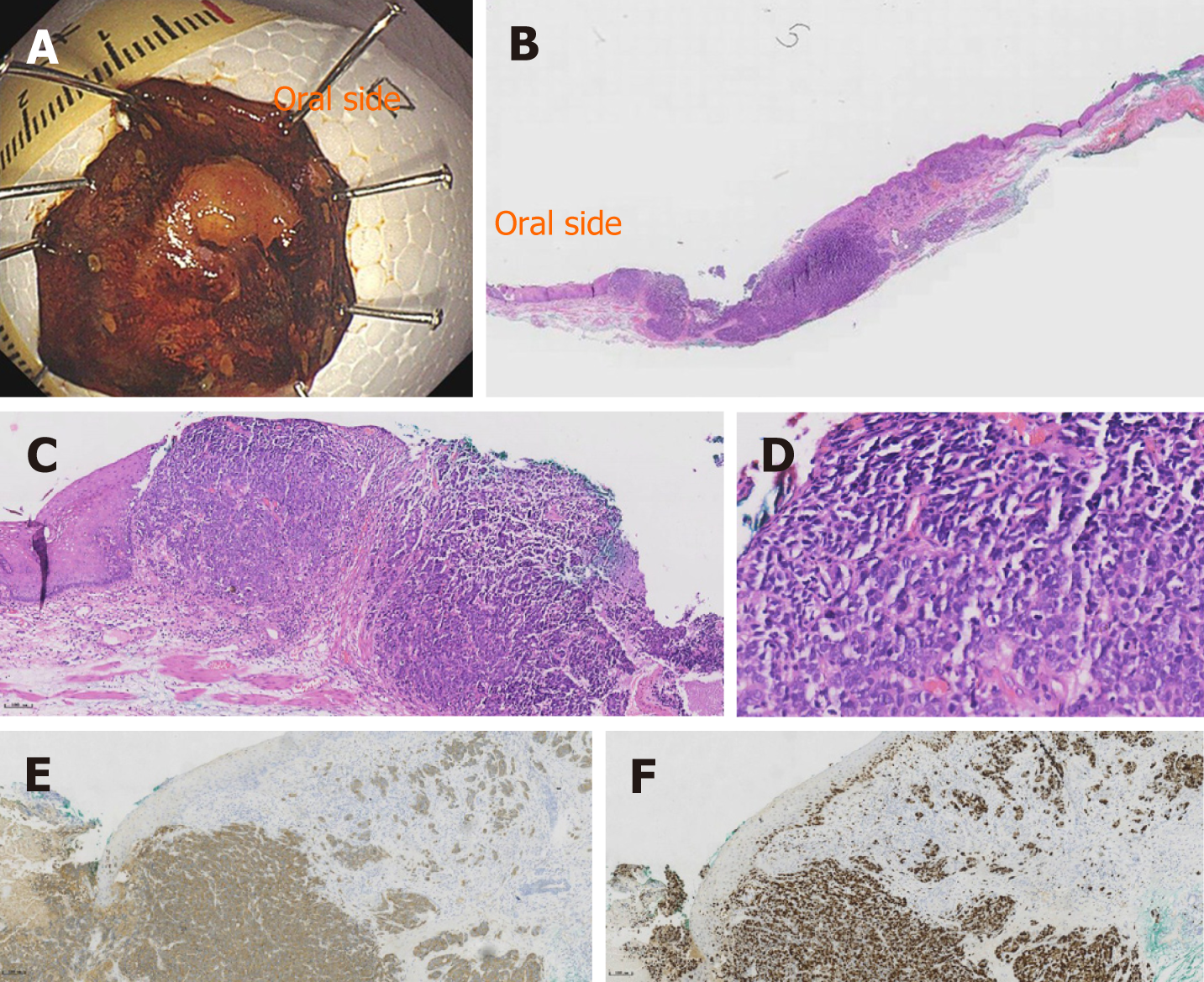 Figure 3 Histological findings of the resected specimen (Case 2). A: The specimen resected by endoscopic submucosal dissection; B: The macroscopic appearance of the small cell carcinoma; C: The tumor was partially covered by a non-neoplastic epithelium (hematoxylin and eosin staining, magnification × 100); D: The small cell carcinoma component observed in a high power field (magnification × 400); E: Immunohistochemical staining showed that synaptophysin were positive (hematoxylin and eosin staining); E: Ki-67 index was 80%.
OUTCOME AND FOLLOW-UP

The first patient died of brain metastases 3 mo later. The second patient is still asymptomatic as of the writing of this report, and the results of physical examinations remained normal. Nine months after the start of treatment, the patient was still in good general condition and the disease was stable.

PESCC is characterized by high malignancy and early metastasis. Although the morbidity is very low, PESCC accounts for about 0.05%-3.1% of all cases of esophageal cancer[6]. However, it is characterized by early dissemination and poor prognosis. Although the standard treatment protocol for such aggressive disease has not been established, most patients were treated by surgical resection, chemotherapy, or radiotherapy, whether alone or in combination[7,8]. Early-stage PESCC is extremely rare in clinical practice and very few cases have been reported. In addition, the optimal treatment strategy for early-stage PESCC has not been established.

Three important clinical findings were ascertained by the two cases in the present report. Early-stage PESCC can manifest as a small submucosal mass covered by a non-neoplastic epithelium without clinical symptoms; PESCC progresses rapidly even in the early stages; and ESD may be useful as a curative treatment in this period.

With regard to the first clinical issue, early-stage PESCC can manifest as a small submucosal mass covered by a non-neoplastic epithelium without clinical symptoms. PESCC is a rare malignant epithelial tumor that is distinct from squamous cell carcinoma. Two cases of PESCC were first reported by Mckeown[9] in 1952. Although many consecutive cases have been reported since then, only few large series of cases were reported in either China or other countries[10,11]. The histological origin of PESCC is controversial. One theory suggests that it originates from esophagus neuroendocrine cells in the basal or submucosal glands of the mucosa called APUD cells, while others hypothesize that a totipotent primitive cell is the common precursor of all epithelial neoplasms of the esophagus and can differentiate into carcinomas of squamous cells, glandular elements, small cells (neurosecretory granules), and reserve cells (without granules). This means that undifferentiated small cell carcinoma, having been classified as one entity by pathologic assessment, actually contains several different entities[12]. In our patients, endoscopic ultrasonography showed a hypoechoic mass in the muscularis mucosa invading the submucosal layer. It appears to support the former perspective. PESCC at early stage is generally a sub-epithelial growth and frequently covered by a non-neoplastic epithelium[1]. The biopsy specimen may contain no tumor components, thus it is easily misdiagnosed as a leiomyoma and the chance of diagnosis at early stages of this tumor may be missed. The majority of cases are thus diagnosed at the late stage of the disease at present. It is typically diagnosed only a few months after the onset of symptoms such as dysphagia and weight loss, just like Case one.

Concerning the second clinical issue, PESCC progresses rapidly even at early stages. The first case showed that it took only 14 mo for the tumor progression from early stage to late stage. In the second case, the tumor developed hyperemic erosion from smooth mucous membrane appearance in about only 2 wk. These observations suggest that if ESD is to be performed, the time from diagnosis to resection should be minimized.

Regarding the third clinical issue, we learned that ESD is useful for curative treatment of PESCC. In the last decade, ESD, a therapeutic endoscopic technique, has been used to excise superficial gastrointestinal neoplastic lesions[13]. The case described above is the first known report using ESD as a treatment for early-stage PESCC. Because of the rapid growing tumor character causing late-stage detection, most cases are not candidates for noninvasive curative treatments like endoscopic mucosal resection or ESD. If we identify that a tumor may be PESCC at an early stage, even though a biopsy specimen shows no evidence of malignancy, ESD is recommended as a diagnostic resection. Our patient was thereby cured “en bloc” using a minimally invasive dissection technique. Although the patient underwent additional surgery due to full infiltration of the submucosa, the histopathological findings showed no residual tumor and the lymph node was negative. Follow-up study showed a good prognosis.

In conclusion, early-stage PESCC can manifest as a small submucosal mass without clinical symptoms. It progresses rapidly even at early stages. Early recognition of PESCC by endoscopy will improve its prognosis. ESD may provide an opportunity for the early treatment of PESCC.