Multiple myeloma is a malignant hematological disease characterized by proliferation of monoclonal plasma cells mainly in the bone marrow. Extraosseous epidural plasmacytoma associated with myeloma arises from lymphoid tissue in the epidural space without focal vertebral involvement, and is rare.

Core Tip: Extraosseous epidural plasmacytoma associated with multiple myeloma is believed to arise from lymphoid tissue in the epidural space. Patients with these lesions can present with normal or diffuse vertebral bone marrow patterns on magnetic resonance imaging. Chemotherapy and laminectomy should be considered for treatment.

Multiple myeloma is a hematogenous disorder characterized by the proliferation of small monoclonal plasma cells. Symptoms develop because of anemia, immunosuppression, renal failure, hypercalcemia, osteolytic bone lesions, and pathologic fractures. Despite therapeutic advances, the 5-year survival rate remains just under 50%[1]. On magnetic resonance imaging (MRI), myeloma involves the bone marrow in either a focal pattern characterized by nodular marrow lesions, or a diffuse pattern characterized by widespread homogeneous alteration of marrow signal intensity. Although myeloma typically breaks through the cortex to extend into the surrounding tissue, epidural extraosseous plasmacytoma with intact adjacent bone is uncommon.

We present two patients with multiple myeloma, who developed epidural plasmocytoma causing spinal cord compression. To the best of our knowledge, these patients represent the 7th and 8th reported cases of spinal epidural extraosseous plasmacytoma associated with myeloma. We also review the current literature.

Case 2: A 53-year-old man was admitted to the hospital because of progressively worsening intractable thoracolumbar spine pain that limited his activities and rendered him unable to lie flat. Associated symptoms included bilateral lower extremity numbness and dysuria.

Case 1: Eleven months earlier, the patient was diagnosed with kappa subtype nonsecretory multiple myeloma and treated with seven courses of vincristine, adriamycin, and dexamethasone, and one course of vincristine, adriamycin, cyclophosphamide, and dexamethasone. MRI at the time of initial diagnosis showed diffuse osteolytic lesions in the thoracic and lumbar vertebrae.

Case 1: The patient exhibited neurologic deficits in both upper extremities.

Case 2: Neurologic examination showed sensory loss below the level of L1, complete paraplegia in both lower extremities, and absence of patellar reflexes bilaterally.

Case 1: At the time of myeloma diagnosis, laboratory data showed normocytic normochromic anemia. Blood urea nitrogen was 34 mg/dL, calcium was 13.5 mg/dL, total protein was 6.8 g/dL, and albumin was 3.6 g/dL. A peripheral blood smear showed no evidence of rouleaux. β2-microglobulin was elevated at 4500 μg/L (normal range, 600-2000 μg/L). Immunofixation of the serum and urine using monoclonal antisera against IgG, IgA, IgM, and λ was also negative. No monoclonal gammopathy was found in the serum or urine. Bone marrow biopsy showed marked plasmacytosis, with 45%-60% infiltration and osteoclastic invasion of the bone. Immunoperoxidase staining of the bone marrow aspirate was positive for intracytoplasmic light chain, consistent with nonsecretory multiple myeloma.

Case 2: Laboratory studies at the time of the myeloma diagnosis showed an elevation in the erythrocyte sedimentation rate to 92 mm/h, a C-reactive protein level of 5.12 mg/L, and normochromic normocytic aplastic anemia (hemoglobin, 104 g/L), with normal leukocyte and platelet counts. Bence-Jones protein was not detected. Bone marrow aspirated from the sternum showed 32% malignant plasma cells; presence of IgD and λ chains in the tumor cells was confirmed by immunohistochemistry.

Case 1: The patient underwent spinal MRI to evaluate her arm weakness, which showed a posterior epidural mass extending from C7 to T3, measuring 61 mm × 5 mm in the sagittal plane. The mass compressed the spinal cord and appeared isointense on both T1-weighted imaging (T1WI) and T2-weighted imaging (T2WI). On contrasted T1WI, the mass showed moderate and homogenous enhancement (Figure 1).

Case 2: Spinal MRI showed a posterior epidural mass extending from the Th11 to L1 Levels. The mass was isointense to the paravertebral muscles on T1WI and T2WI. On CT with sagittal reconstructions, the vertebral cortical margins were clearly defined and no communication was noted between the epidural mass and posterior vertebral elements. Multiple osteolytic lesions of the vertebrae appeared as multiple patchy areas of high signal intensity on T2WI and low density on CT (Figure 2). Vertebral body collapse without spinal canal narrowing was noted at Th8 and Th9.

Cases 1 and 2: The patients were diagnosed with extraosseous spinal epidural plasmacytoma associated with multiple myeloma.

Case 1: As there was no indication for surgical resection, five courses of chemotherapy with vincristine, adriamycin, and dexamethasone were administered.

Case 2: Decompressive laminectomies were performed from Th11 to L1 and the soft tissue mass coating the dura was easily and completely removed.

Case 1: Follow-up MRI showed a marked reduction of the epidural mass and resolution of spinal cord compression (Figure 3). The patient’s neurologic deficits significantly improved and she is currently alive 42 mo after diagnosis. 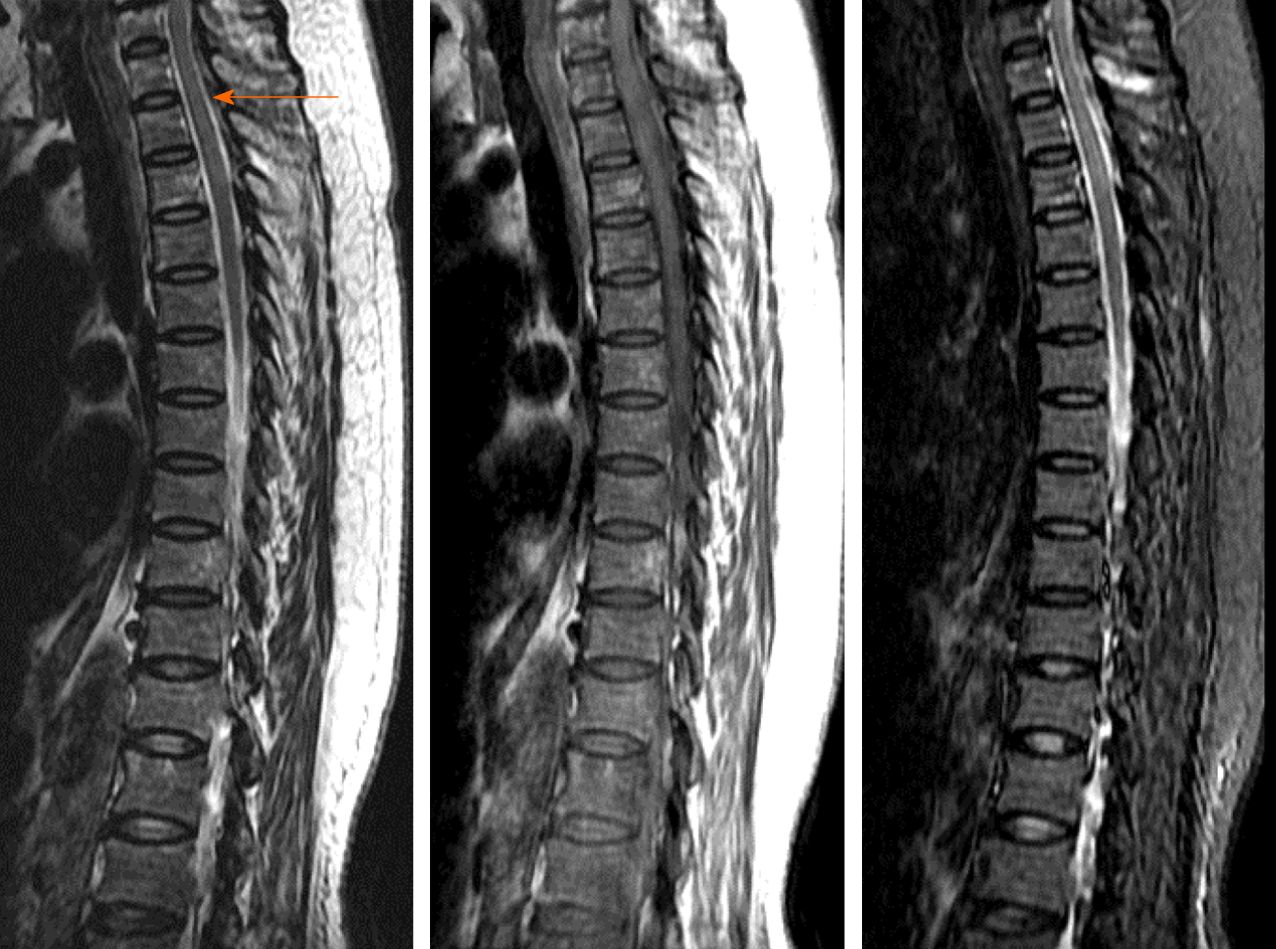 Figure 3 Follow-up magnetic resonance imaging of the patient described in Case 1 after chemotherapy. The epidural mass size was markedly reduced (arrow) and the subarachnoid space had re-expanded.

Case 2: Immunohistochemical studies of the soft tissue mass were consistent with kappa subtype myeloma (Figure 4). The patient is currently alive 19 mo after diagnosis.

Figure 4 Histological features of the epidural mass in the patient described in Case 2. A: Histology (hematoxylin and eosin, 400 × magnification) showed sheets of plasma cells with eccentric nuclei, cartwheel chromatin, and abundant cytoplasm with binucleation of some cells; B: Immunohistochemistry staining showed the plasma cells were positive for kappa light chain and cluster of differentiation 138.
DISCUSSION

Extraosseous multiple myeloma is uncommon, comprising < 5% of all plasma cell neoplasms, and it has a particular predilection for the mucosa of the upper respiratory and gastrointestinal tracts[4]. Extraosseous epidural plasmacytoma associated with myeloma is believed to arise from lymphoid tissue in the epidural space[5]. Extension of paraspinal lymph nodes through vertebral foramina is another possibility[6]. Regardless, MRI is the best radiologic modality to detect epidural masses in affected patients.

Extraosseous epidural plasmacytoma associated with myeloma was first described by Matsui et al[7] in 1992. Since then, a total of eight cases have been reported, including the two presented here (Table 1). These cases comprise four men and four women, with ages ranging from 40 to 85 years. The masses were located over the entire length of the spine, from the cervical vertebrae to the sacrum. In the patient reported by Matsui et al[7], the mass was located at L3 at the time of initial diagnosis and relapsed after 15 mo, extending epidurally from C7 to T4. Seven patients had epidural masses spanning multiple segments and one patient had a mass confined to the L3 segment. The mass spanning the largest number of segments extended from C7 to L2/3[3]. Furthermore, extraosseous epidural masses restricted to the spinal canal or extending to the vertebral foramina and paravertebral muscles occurred in three patients.

MRI clearly demonstrates epidural masses, while CT can be used to define the cortex of adjacent vertebrae. The reported imaging findings of epidural plasmacytoma associated with myeloma, including our two cases, are presented in Table 2. On T1WI, four of nine masses appeared isointense and one appeared hypointense; T1WI findings of the remaining four masses were not reported. In contrast, four masses were hyperintense and three were isointense on T2WI; T2WI findings of the remaining two masses were not reported. Among the four patients who underwent contrasted MRI, three had masses that enhanced while one did not. Four of the eight patients exhibited isolated epidural plasmacytoma with normal spinal bone marrow, while the remaining four showed vertebral infiltration with multiple osteolytic lesions.

There are no current guidelines for management of extraosseous epidural plasmacytoma associated with myeloma. All eight reported patients were treated with chemotherapy, including our two, and four showed improvement. Three patients underwent laminectomy because of paraplegia, and one patient underwent surgical resection. Survival in the six previously reported patients ranged from 6 to 19 mo. Both of our patients are currently alive; the survival from myeloma diagnosis to last follow-up was 42 mo and 19 mo, respectively. Furthermore, the patient described in case 1 has remained in remission for over 3 years and has experienced a significant decrease in epidural mass size, indicating a good chemotherapy response.

Multiple myeloma should be differentiated from other epidural neoplasms such as lymphoma, solitary amyloidoma, and metastases. Spinal epidural lymphoma without evidence of systemic involvement is uncommon. On MRI, the epidural mass appears isointense on T1WI and T2WI and poorly enhances on contrasted imaging[8]. Solitary amyloidoma of the spine is also rare and manifests as an epidural tumor with bony involvement that typically appears hypointense on T1WI and T2WI and brightly enhances on contrasted imaging[9]. Epidural metastases are difficult to distinguish on the basis of MRI signal intensity and morphology and require histopathological confirmation for further management[10].

In conclusion, although the presence of an extraosseous epidural mass with diffuse vertebral bone marrow infiltration can establish the diagnosis of multiple myeloma, establishing the diagnosis of an isolated epidural mass with normal vertebral bone marrow on MRI is difficult. However, patient age and laboratory findings may provide clues. Despite the poor prognosis, chemotherapy is indicated for all myeloma patients, and laminectomy is indicated in patients with paraplegia resulting from epidural spinal cord compression.