A 56-year-old postmenopausal woman presented with repeated pain attacks in the right lower quadrant abdomen, accompanied by diarrhoea, anorexia, and weight loss for about 3 mo. The patient initially misdiagnosed as having gastrointestinal carcinoma because of similar pathological features. Based on the physical examination, tumour markers, imaging tests, and genetic tests, the patient was clinically diagnosed with ovary mucinous adenocarcinoma. Whether gastrointestinal-type chemotherapy or gynecologic chemotherapy was a favourable choice for patients with advanced ovarian mucinous cancer had not been determined. The patient received a chemotherapy regimen based on the histologic characteristics rather than the tumour origin. The patient received nine cycles of FOLFOX and bevacizumab. This was followed by seven cycles of bevacizumab maintenance therapy for 9 mo. Satisfactory therapeutic efficacy was achieved.

The patient presented with repeated pain attacks in the right lower quadrant of the abdomen, accompanied by diarrhea, anorexia, and weight loss for approximately 3 mo. She took diclofenac sodium mucilage 1-2 times daily to relieve the pain, with a pain score ranging from 3 to 4 points.

The patient had hypertension for 3 years. The blood pressure ranged from 120-140/80-100 mmHg after taking nifedipine controlled-release tablets and enalapril. She received laparoscopic cholecystectomy, resection of lateral lobe of the left liver, and choledocholithotomy with exploration because of cholelithiasis. Histologically, there was a large range of related inflammatory epithelial changes including fibrosis, mononuclear infiltrate, and thickening of the muscular layer.

Menarche occurred at 13 years of age, and menstrual cycles were regular, with bleeding typically occurring every 30 d and lasting for 5-6 d. She married at the age of 25 years and had a son and two daughters. The patient had an occasional drink but did not smoke tobacco or use illicit drugs. Her father had died of liver cancer associated with hepatitis B virus, her mother had died of cerebral hemorrhage, one brother had died of cholangiocarcinoma, and another had died of gastric cancer. Her sister and younger brother were healthy.

On examination, there were several hard and painless masses at the left-sided cervical and supraclavicular regions. The largest mass (measuring 2 cm × 3 cm) was located at the lower neck (level IV). There was tenderness in the right lower quadrant. The liver and spleen were impalpable.

The baseline results of laboratory tests and tumor markers are shown in Tables 1 and 2.

The aspiration biopsy of the cervical lymph nodes under ultrasound guidance showed lowly differentiated mucinous adenocarcinoma. The tumour cells were mainly arranged in an irregular adenoid, cribriform, or strip-shaped pattern with moderate to severe atypia. The nucleus was round or ovoid-shaped and centrally located in the cells. A moderate amount of extracellular mucus was found. The tumour cells were embedded in the collagenized desmoplastic stroma with focal necrosis. Tumour cells expressed CK7, p53, and p16 but not CK20, TTF-1, GATA3, CDX-2, Pax-8, ER, SATB2, NapsinA, and WT-1 (Figure 1). The pathologists suspected metastases from the digestive and biliary tract. They reviewed the patient’s pathological specimen from the hepatobiliary operation and found no precancerous lesions or invasive carcinoma. Gastroscopy and colonoscopy also showed no abnormal mass. 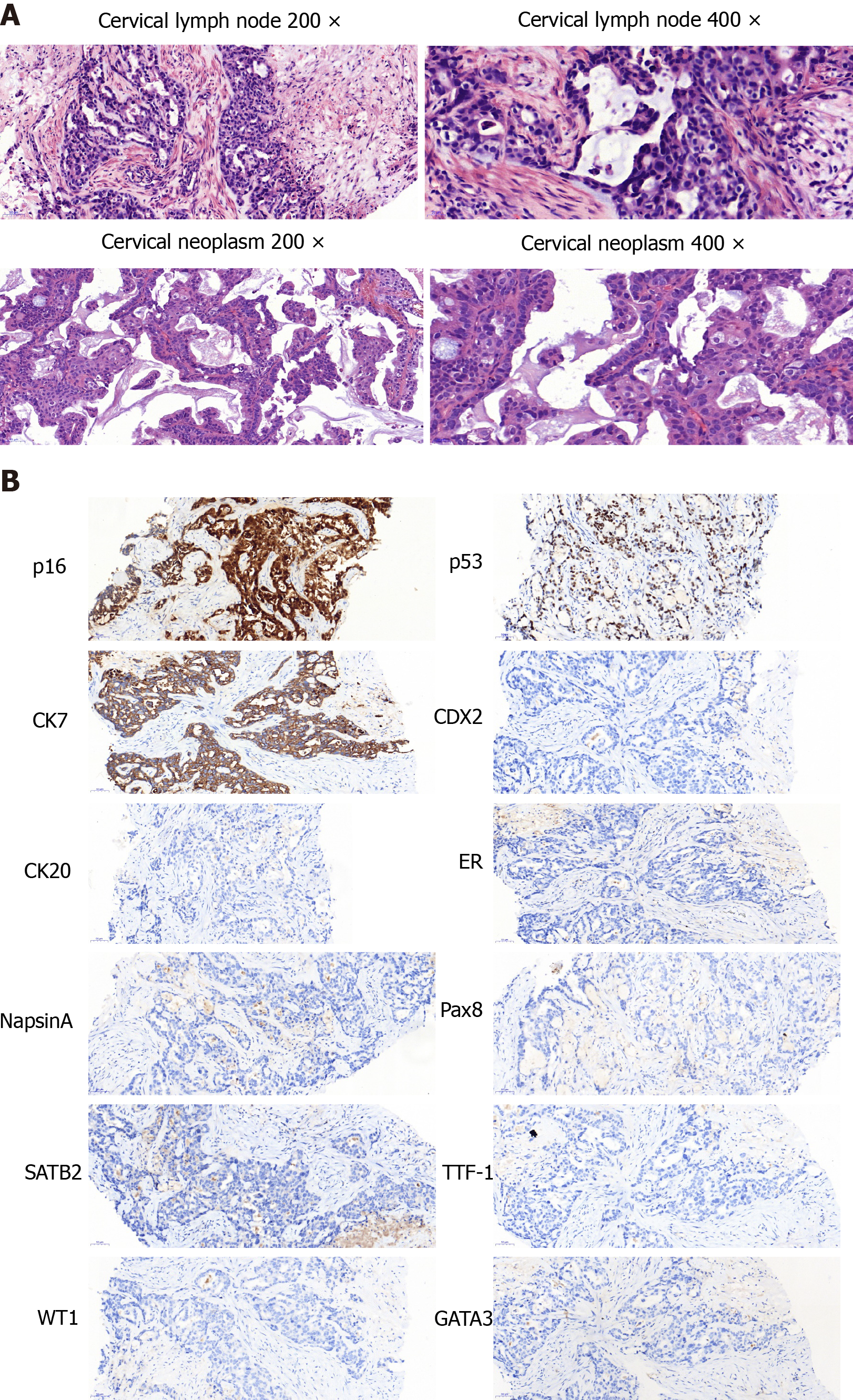 Figure 1 Pathological examination. A and B: Cervical lymph node (A) and cervical neoplasm (B).

The patient refused further medical examination and resorted to traditional Chinese medicine at her discretion for 2 mo. After aggravated symptoms, she visited our hospital again for further evaluation and a general checkup was performed. Gynaecological examination revealed a smooth cervix and a neoplasm of about 0.5 cm in size. The rest of the examination was as previously reported.

The patient refused the diagnostic operation and CT-guided percutaneous biopsy of the right adnexal occupying lesions. Therefore, the pathological diagnosis was not obtained. However, the biopsy of the cervical neoplasm indicated poorly differentiated adenocarcinoma. The pathologists compared the morphological characteristics between the tumour cells of the cervical lymph nodes and cervical neoplasm and concluded that the two metastases were from the same origin. The morphology of the tumour cells in cervical biopsy was similar to some extent to that of the lymph node in the neck but it was much richer in the papillary arrangement, especially the extracellular mucus, and was diagnosed as mucinous adenocarcinoma. The intracellular mucus was more visible and the columnar mucinous epithelium was more abundant than those in the neck lesion were. After combining the medical history and immunohistochemical results, the biliary tract and the ovary were the two most likely sources.

Based on the physical examination, tumor markers, imaging tests, and genetic tests, the patient was clinically diagnosed with ovarian mucinous adenocarcinoma.

Imaging tests were performed after every three cycles of chemotherapy to evaluate the therapeutic effect. CT indicated continuous shrinkage of the lymphatic metastases without evidence of new metastatic disease (Figure 2). Before the treatment, evaluation of the tumor markers showed noticeable levels of carcinoembryonic antigen (CEA), carbohydrate antigen 19-9 (CA19-9), CA125, and CA242 (Table 2). After four cycles of chemotherapy, all the tumor markers decreased to normal ranges. 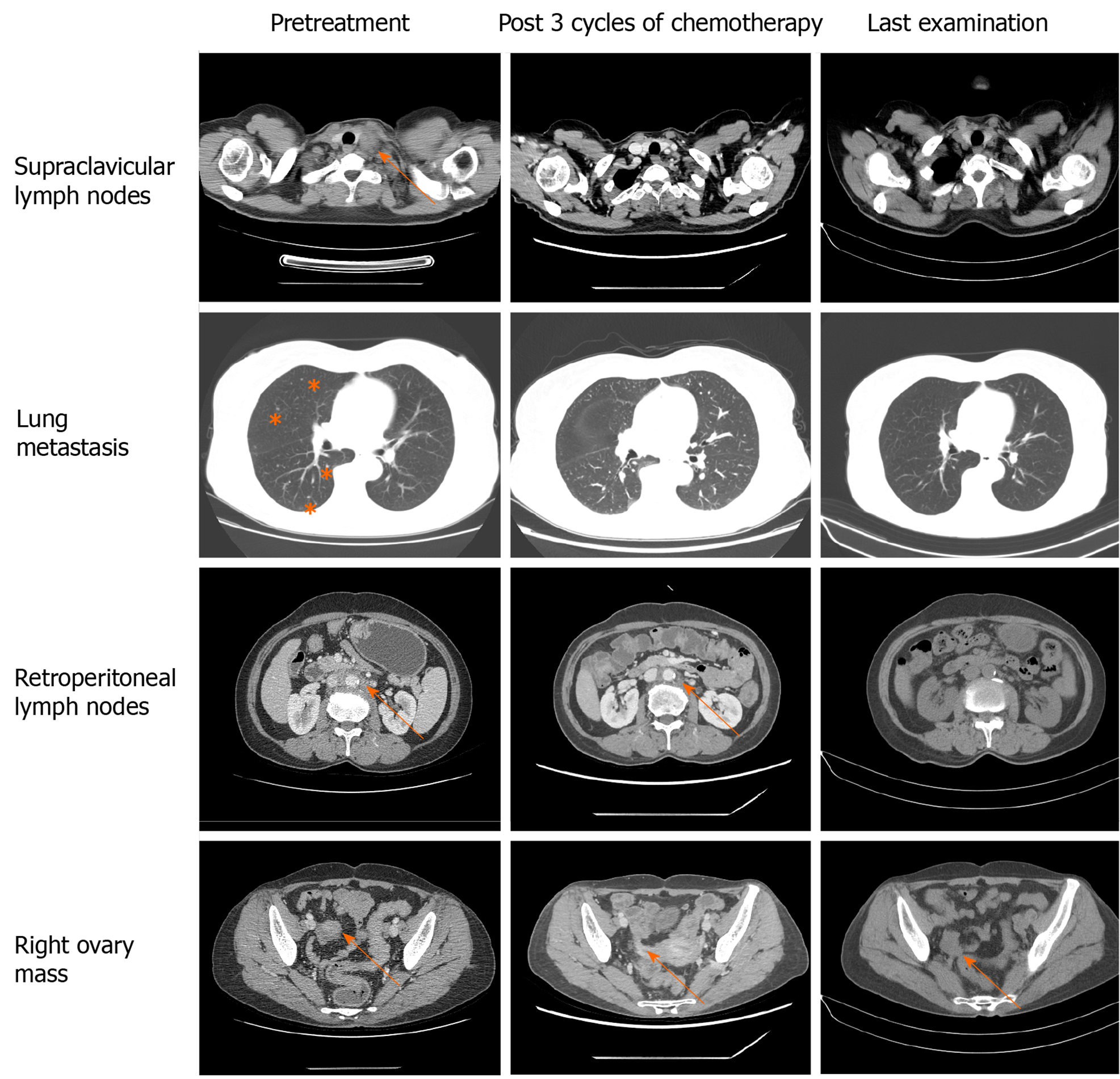 In the present case, it was difficult to achieve a precise diagnosis. First, both the gastrointestinal and ovarian tumour markers were elevated. Serum CEA, CA19-9, and CA242 levels are most frequently elevated in patients with pancreatic and gastrointestinal tract tumours. Serum CA125 is a tumour marker derived from tethered mucin, MUC16, and is usually associated with serous and endometrioid tumours.

Second, the right adnexal occupying lesion was relatively small. Unilateral ovarian tumours of more than 10 cm in the greatest dimension are most likely to be ovarian in origin, whereas bilateral, smaller ovarian masses are more likely to be metastatic[9]. The characteristics of metastases are also inconsistent with primary ovarian cancer. The metastatic spread of ovarian cancer is characterized by ascites and widespread peritoneal implantation. However, our case mainly showed multiple salutatory lymph node metastases.

Finally, although the immunohistochemical profile was consistent with a typical profile of ovarian mucinous carcinoma[10], it was hard to differentiate metastatic carcinoma and ovarian cancer by the morphological features. After combining the medical history and immunohistochemical results, the biliary tract and the ovary were the two most likely sources. Because CK7, p16, and p53 may be positive in both potential sources, immunohistochemical indicators are not reliable. Ovarian mucinous adenocarcinoma is rare and often gastrointestinal-epithelium like. In our case, the morphologies in both lesions lacked the typical characteristics of gastrointestinal epithelium features such as nuclear spindling or goblet-shaped like epithelial cells. Stromal sclerosis is one of the characteristics of biliary epithelial carcinoma. The lesion in the neck lymph node was very similar to stromal sclerosis not only in cellular morphology but also in heavy stroma fibrosis.

The most expedient way to establish the diagnosis would be to perform diagnostic laparotomy with an intraoperative frozen section examination. However, the patient refused the diagnostic operation and CT-guided percutaneous biopsy of the right adnexal occupying lesions. The patient was diagnosed with ovarian mucinous carcinoma based on the following reasons. Although the tumour-marker profile favored the diagnosis of biliary and gastrointestinal carcinoma, the PET-CT and gastroendoscopy showed no abnormal mass. Next, genetic tests revealed BRCA2 exon 20 truncating mutation (p.E2877), which has been identified as the mutation for hereditary breast, ovarian, and other related cancers in the ClinVar website (https://www.ncbi.nlm.nih.gov/clinvar/). The relationship between EPCAM mutation and carcinogenesis has not been previously reported in the literature. Based on the Cancer Genome Atlas, mutations of this gene are common in melanoma, ovarian cancer, leiomyosarcoma, and cholangiocarcinoma.

We report an initially misdiagnosed case of primary ovarian mucinous carcinoma by considering clinical characteristics, imaging, and genetic tests. The patient received chemotherapy regimen based on the histologic characteristics rather than the tumour origin, achieving satisfactory therapeutic efficacy. However, further studies should focus on genetic analysis in the differential diagnosis of primary ovarian mucinous carcinoma and non-gynecologic mucinous carcinoma. Because of the rarity of this tumour, there are no standard criteria for the guidelines for treatment. In the future, standard treatments should be explored through randomized controlled trial or retrospective studies.