Small-cell neuroendocrine carcinoma (SNEC) of the rectum is a rare tumor associated with poor prognosis.

We report a case of a 77-year-old male who came into our hospital because of blood with his stool. An endoscopy revealed a cauliflower-like neoplasm in his rectum. Imaging examination showed that the lesion in the upper rectum was likely rectal cancer, and there was no evidence of metastasis. The patient was treated with surgery. Pathological examination confirmed SNEC of the rectum and an R0 resection was achieved. However, 1 mo after the operation, the patient developed intestinal and ureteral obstructions due to peritoneal metastases. Finally, the patient died from renal failure.

SNEC of the rectum is a high-grade carcinoma with an aggressive phenotype, and surgery should be cautiously considered.

Core Tip: Total mesorectal excision was performed according to pathological analysis, and R0 resection was achieved. However, this patient had tumor recurrence only 1 mo after surgery. Therefore, small-cell neuroendocrine carcinoma of the rectum is a high-grade carcinoma with an aggressive phenotype.

Small-cell neuroendocrine carcinomas (SNECs) are malignancies derived from the cells of the neuroendocrine system. Only 2%-2.5% of small-cell carcinomas (SCCs) arise from extra-pulmonary tissues with colorectal SCC accounting for 0.3% of all SCCs and 5.5% of extra-pulmonary SCCs[1]. Most patients with SNEC of the rectum experience symptoms such as defecation difficulties and anal discomfort, similar to those for rectal adenocarcinomas. Only a small number of patients experience carcinoid syndromes, such as hypotension, increased heart rate, and so on. The optimal treatment for rectal SNEC remains a topic of debate. Surgery is still considered the main treatment, and chemotherapy also plays a significant role for localized tumors[2]. The prognosis for extra-pulmonary SCC is poor, and tumor recurrence and metastasis often occur in the short term.

A 77-year-old male was admitted to our hospital with blood with his stool for over 1 mo and a change in bowel habits for the 15 d prior.

The patient’s history included hypertension for over 10 years and early-stage hypertensive nephropathy and atrial fibrillation for 2 years. The noted conditions had been controlled with daily medications, including amlodipine (2.5 mg), valsartan (80 mg), metoprolol (47.5 mg) and aspirin (40 mg).

The patient’s family history was ordinary, and there was no history of genetic heritability of colorectal cancer. The patient had no prior endoscopic examinations.

There were no pertinent findings upon physical examination, and the digital rectal examination did not detect the tumor.

Contrast-enhanced computed tomography scans of the chest, abdomen and pelvis showed that the wall of the upper rectum was unevenly thickened. The lesion was very likely a rectal carcinoma, which broke through the adventitia and involved the mesentery. Multiple surrounding lymph nodes and the adjacent superior rectal artery were positive (Figure 2).

A magnetic resonance image (MRI) of the pelvis revealed the lesion in the upper rectum. The MR stage was T3N2, the circumferential resection margin was positive, and the extramural venous invasion was positive (Figure 3).

A final diagnosis of rectal SCC pT4aN2aM0 IIIC was made.

According to the computed tomography scans, the digital rectal examination did not detect the tumor located in the upper rectum. We did not recommend for this patient to have radiotherapy prior to radical surgery. Because the patient was 77-years-old and had previous underlying diseases including hypertension, atrial fibrillation and hypertensive nephropathy, the patient was treated with radical and elective surgery (Hartmann’s procedure), including proximal fistulation and distal closure and regional lymph node dissection. During the operation, the lesion was found to be located in the upper rectum and was clearly separated from the surrounding tissues. We did not find any metastases in the abdominal cavity. The tumor was completely resected.

The resected lesion was ulcerated with a size of approximately 4 cm × 3 cm × 0.5 cm. Histopathological analysis revealed a poorly differentiated small-cell tumor. A total mesorectal excision was performed. According to the pathological results after surgery, the tumor was 3 cm from the distal margin, and the distance to the tumor from the far margin of the mesentery was 6 cm. At the same time, the excised mesorectum was intact. The R0 resection for the patient was considered successful because we did not observe tumor infiltration into the surgical margin, including the lateral margin, the distal margin and radial margin by microscopy. However, the lesion infiltrated the visceral peritoneum and peri-intestinal adipose tissue, which did not infiltrate the surrounding organs, and tumor metastases were observed in the peri-intestinal lymph nodes (6/9) (pT4aN2aM0 IIIC). Immunohistochemistry showed CD56, NSE and Ki-67 (80%) positivity (Figure 4), while CD20, myeloperoxidase and S100 were negative. 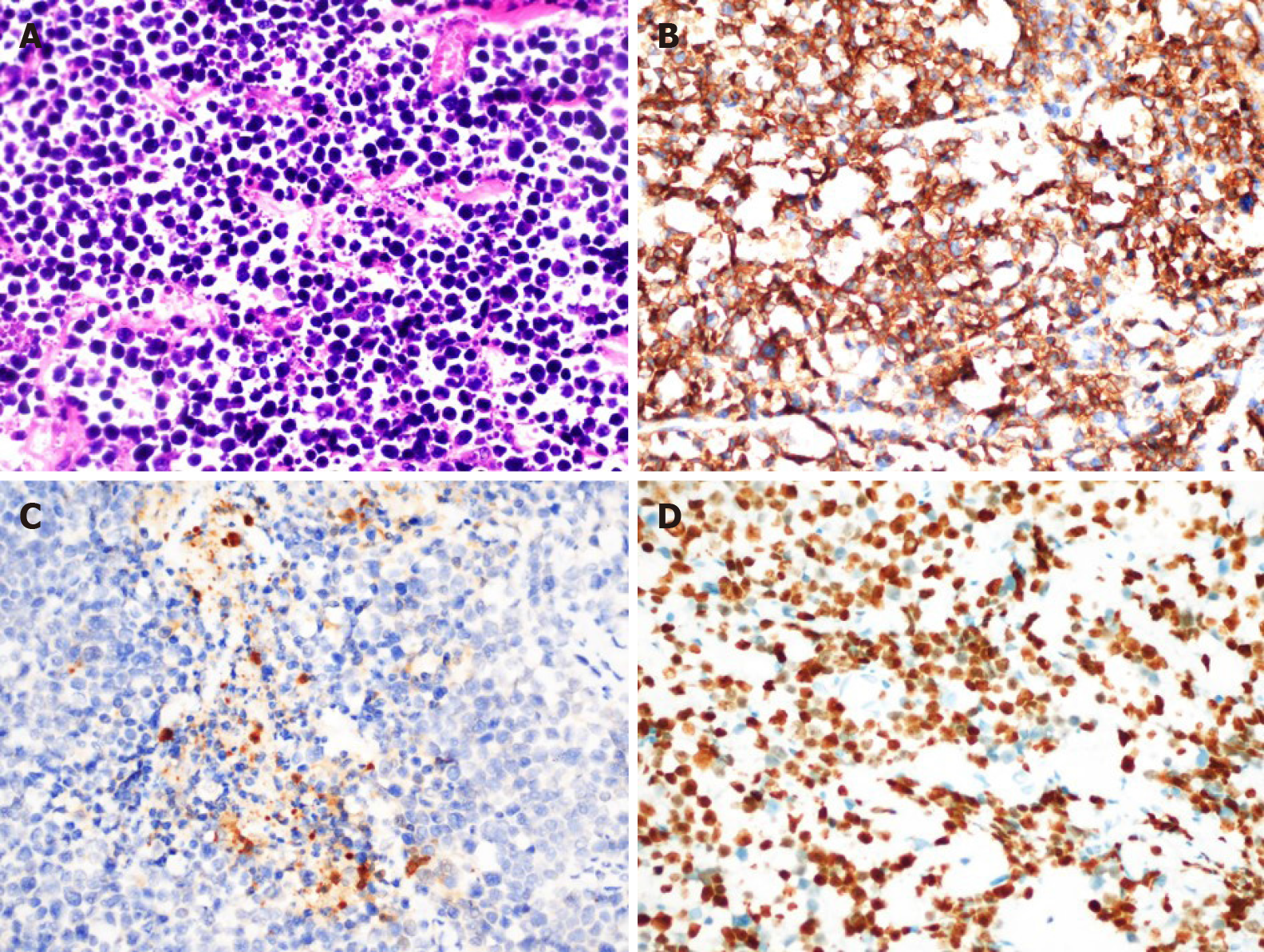 The patient recovered quickly after surgery and left the hospital within a few days. The patient was later referred to our hospital because of abdominal distension, cessation of defecation and exhaustion at the stoma 1 mo after surgery. Physical examination found that there were multiple nodules in the right lower abdomen. These nodules had a hard texture and unclear borders with sizes of approximately 1.5 cm × 1.5 cm. Contrast-enhanced computed tomography scans of the abdomen and pelvis showed intestinal and ureteral obstructions caused by peritoneal metastases (Figure 5).

SNEC of the rectum is a rare tumor[3-5] that accounts for 1% of rectal malignancies[6]; rectal SNECs are derived from enterochromaffin (Kulchitsky) cells[7-9]. Most rectal SNECs produce symptoms similar to those for rectal adenocarcinomas, including defecation difficulties, anal discomfort and blood with the stool[10,11]. These nonspecific symptoms make clinical diagnosis difficult. Therefore, the diagnosis of rectal SNEC depends on pathological assessments, which reveal a morphology of mainly small cells with a thick chromatin layer, scarce cytoplasm, no obvious nucleoli and an increase in mitotic figures[12]. Most rectal SNECs are negative for immunohistochemical markers[13]. Some studies have shown that SCCs are negative for synaptophysin and chromogranin A[14]. Other neuroendocrine markers, such as NSE or CD56, are less specific and must be used with caution[15]. Close attention should be paid to the important role of cell morphology in the diagnosis of rectal SNEC. At the same time, immunohistochemical markers provide us with reference information about rectal SNEC. Recently, some studies proposed to classify neuroendocrine carcinomas by TP53 or RB1 mutations[2].

MRI plays an important role in SCC diagnostics, whereby it can be used for the assessment of the preoperative staging of the tumor. For the patient in this case report, the pathological results showed that the tumor invaded peri-intestinal fat tissue (pT4), which is consistent with a T3 diagnosis by MRI imaging[19,20]. Therefore, the postoperative pathological results were consistent with the preoperative MRI scans.

The optimal treatment for SCC remains a topic of debate. Radical resection is considered the main treatment method with chemotherapy for rectal SNEC helping to control SCC arising from pulmonary tissue[21-23]. Conclusive benefits of radiotherapy for rectal SNEC have yet to be reported[24,25]. There is still controversy in the field over the efficacy of surgery for colorectal SCC. Smith et al[26] demonstrated that resection of primary colorectal neuroendocrine neoplasms does not result in improved prognosis, which is in contrast to adenocarcinoma but consistent with small-cell lung cancer. The prognosis in the Smith et al[26] study was consistent with a study by Palvio et al[27]. However, some studies revealed that there were significantly improved survival rates in gastrointestinal SCC after radical surgery[28,29]. Some studies have demonstrated that surgery may cause damage to the vascular lining by causing the release of reactive oxygen species produced by macrophages leading to exposure of the extracellular matrix and allowing circulating tumor cells to bind[30]. For the patient reported here, there were two main reasons to support performing surgery: (1) The patient did not have metastases; and (2) It was predicted that the lesion could be completely resected. However, surgery did not bring a survival benefit to the patient reported here. The patient’s disease progressed 1 mo following surgery. The time to tumor relapse was short, suggesting that the tumor was an aggressive phenotype.

In summary, this case highlights that SNEC of the rectum is a high-grade carcinoma with an aggressive phenotype and has a poor prognosis, even if the primary resection is radical in nature.

We would like to express our gratitude to all those who contributed to the study. This work was supported by The First Affiliated Hospital of Chongqing Medical University.