Primary intestinal lymphangiectasia (PIL) is a rare congenital protein-losing enteropathy caused by dysplasia of the small intestinal lymphatics. The cause of the disease is unknown. Through a literature review, we found that PIL and tuberous sclerosis complex (TSC) have some common symptoms and molecular pathways.

Here, we present the case of a patient with a three-year history of primary intestinal lymphangiectasia. The patient most recently visited the hospital with abdominal distension and swelling of the left leg. His mother told us that she was diagnosed with TSC one year previously, which alerted us because the patient had multiple regions of pigmentation. To evaluate the condition of the child and make a definite diagnosis, multiple imaging examinations were performed, as was TSC gene analysis. The results met the diagnostic criteria for TSC. The patient was discharged after symptomatic treatment. Through a review of the literature, it can be seen that changes at the molecular gene level of TSC can lead to abnormal lymphatic vessels.

In summary, when patients with hypomelanotic macules or enamel hypoplasia are diagnosed with PIL, TSC gene screening may be important for further diagnosis.

Core tip: We present the case of a patient with a history of primary intestinal lymphangiectasia (PIL). The patient was also diagnosed with tuberous sclerosis complex (TSC). Only two cases of PIL associated with TSC had been reported at the time of this writing, and this report presents the third case. It has been reported in previous cases that PIL patients can exhibit hypomelanotic macules or enamel hypoplasia, which are the clinical features of TSC. Through a review of the literature, it can be seen that changes at the molecular gene level of TSC can lead to lymphatic vessels abnormalities. These findings suggest that PIL may be a manifestation of TSC in some cases.

Primary intestinal lymphangiectasia (PIL) is a kind of protein-losing enteropathy with unknown etiology and no specific treatment. The common clinical manifestations are lymphedema, diarrhea, and even serious life-threatening infection. It has been reported in previous cases that PIL patients can exhibit hypomelanotic macules or enamel hypoplasia, which are the clinical features of tuberous sclerosis complex (TSC)[1,2]. We diagnosed a patient with PIL and hypopigmented regions 3 years ago. At his most recent visit, he presented to our department because of abdominal distension and left lower extremity swelling. Because his mother was recently diagnosed with TSC, we carried out a general examination and genetic examination of the patient. Eventually, he was also diagnosed with TSC. Only two cases of PIL associated with TSC had been reported at the time of this writing[3,4], and this report presents the third case. We discuss the possible pathogenesis of PIL and its relationship with the TSC molecular pathway. These findings suggest that PIL may be a manifestation of TSC. Rapamycin has been widely used for TSC or complications with lymphedema and has shown beneficial effects, providing a new idea for the treatment of PIL[5].

In September 2015, the patient was diagnosed with PIL because of diarrhea, edema, hypoproteinemia, lymphocytopenia, endoscopic findings, and biopsy findings (Figure 1). The stool was found to be normal under an uncontrolled diet. He experienced intermittent attacks of abdominal distension and swelling of the left lower extremity, primarily secondary to diarrhea, approximately twice per year. After albumin supplementation and diuresis, the swelling was relieved. Since the time of onset, the patient had no history of seizures, behavioral changes, or mood disturbances.

Figure 1 Biopsy findings and histological image. A: Gastroscopy performed on September 9, 2015 showed that the mucosa of the descending segment and horizontal segment of the duodenum was rough, with dense white spots on the surface; B: Histological image showing dilated lymph vessels (hematoxylin and eosin staining, × 100).
History of past illness

The patient had a surgical history of posterior fibrolipoma resection in April 2015.

The patient’s language and physical abilities were normal. He interacted appropriately with his classmates at school. More than one year previously, his mother was diagnosed with TSC because of a shagreen patch, pulmonary lymphangioleiomyomatosis, and TSC1 mutation [147C > A (p.Tyr49Ter)]. 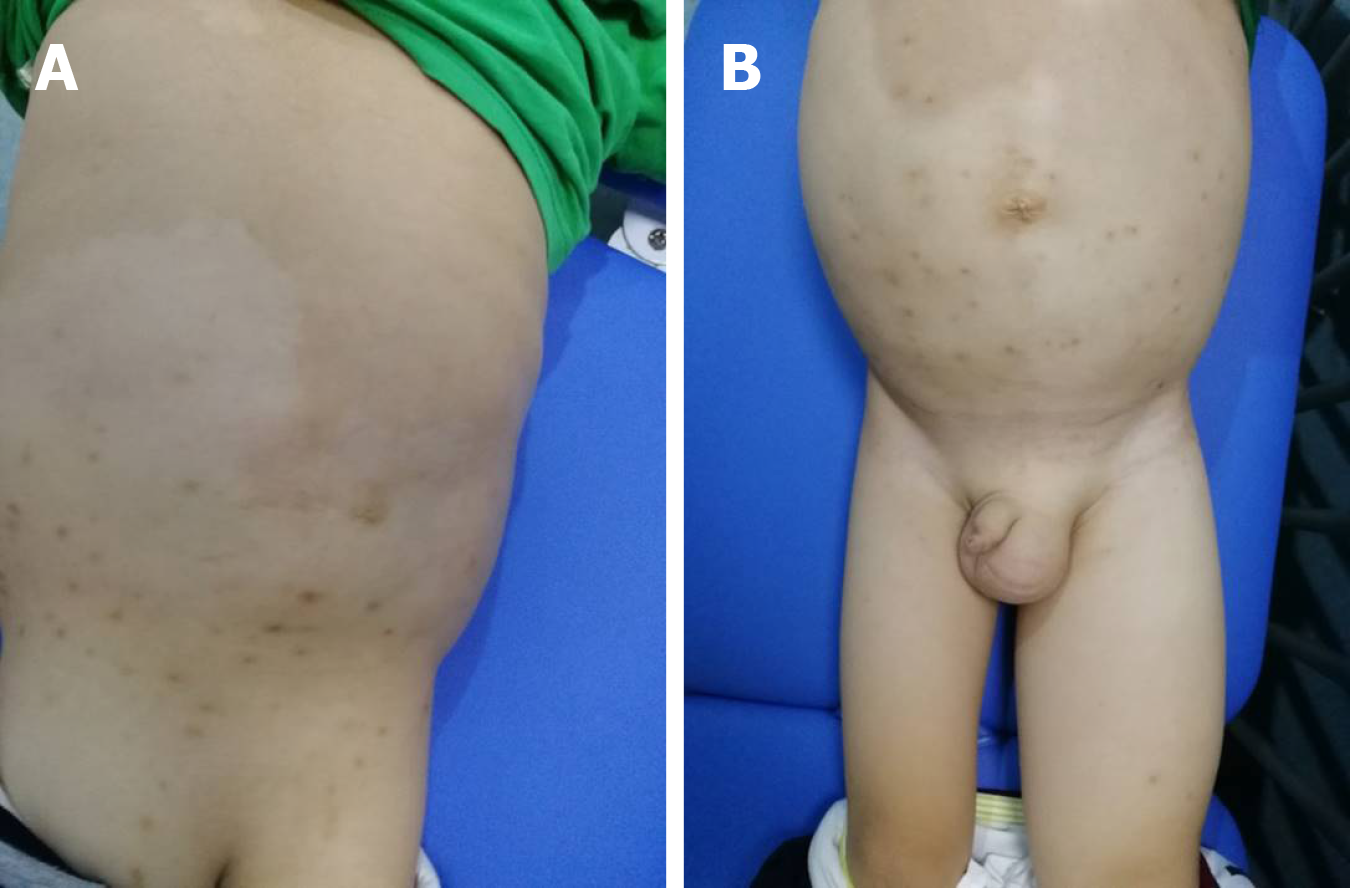 Figure 2 Multiple hypopigmented regions on the back and buttocks (A), abdominal wall, and left scrotum and left lower limb swelling (B).
Laboratory examinations

The detailed results of laboratory evaluations are listed in Table 1.

Considering that the patient had hypomelanotic regions and the mother had TSC, an autosomal dominant genetic disorder, we recommended genetic testing. A mutation of TSC1 was detected: c.147C > A (p.Tyr49Ter). c.147C > A (p.Tyr49Ter), a nonsense mutation, was the same mutation that the patient’s mother exhibited. The 49th amino acid of the translated protein is changed from Tyr to a termination codon, leading to early termination of protein translation.

We conducted other tests to assess organ involvement. No abnormalities were found in the retinal examination. Ultrasound showed multiple solid nodules in the left popliteal fossa. Abdominal ultrasonography revealed thickening of most intestinal walls, thickening of the mesentery with dilatation of veins, and peritoneal effusion. The left kidney was enlarged, and the left renal pelvis was thickened and echogenic. Echocardiography indicated a patent foramen ovale (3.3 mm), and lower extremity venous ultrasound was normal. Computed tomography of the lung revealed no lesions. Magnetic resonance imaging showed subependymal nodules in the anterior region of the left lateral ventricle (Figure 3) and enlargement of the left renal parenchyma with abnormal signal intensity. The left kidney and abdominal cavity had effusion. The intestinal wall and mesenteric fat space were generally thickened, with edema and abnormal signal intensity, particularly in the left semi-intestinal tube. 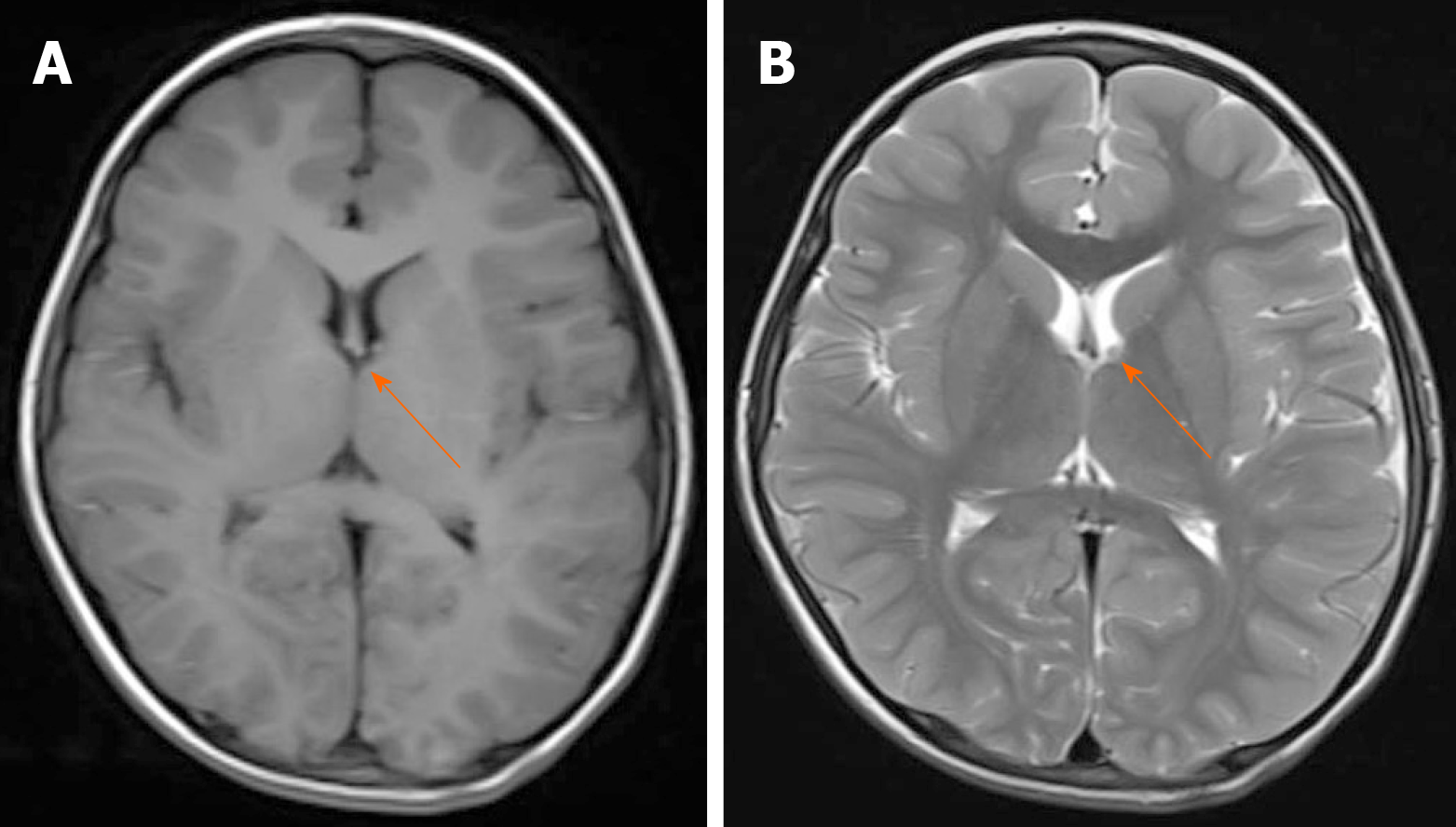 Thus far, the diagnosis of TSC could be confirmed.

Supportive symptomatic treatment was given. After treatment with albumin, a diuretic, and calcium supplements, the patient’s swelling gradually subsided. Blood calcium and albumin levels improved (Table 1).

The patient's condition improved, and he was discharged from the hospital.

PIL, also known as Waldmann’s disease, is caused by giant lymphangiopathy and congenital lymphatic dysplasia. Currently, the etiology is unknown. There is no special therapeutic drug for this disease. Patients need a long-term low-fat and medium-chain fatty acid diet, selective use of octreotide and glucocorticoids, and even surgical resection of the diseased intestinal and lymphoid vessels.

The mother of this patient was diagnosed with TSC one year previously and was positive for TSC1 gene mutation [147C > A (p.Tyr49Ter)]. TSC is a multisystem disease with autosomal dominant inheritance due to genetic mutations in TSC1 or TSC2[6]. These two genes are located on chromosomes 9 and 16, encoding hamartin and tuberin, respectively, which form the TSC1/TSC2 complex to inhibit the mTOR signaling pathway and regulate cell growth and function[7]. Therefore, TSC is caused by abnormal activation of the mTOR signaling pathway. Currently, treatment of this disease is mainly symptomatic. The mTOR inhibitor rapamycin (sirolimus) or its derivative everolimus has achieved certain effects in the treatment of TSC[5,8].

The clinical manifestations of TSC include lymphedema in a small number of parents[9]. There have been 12 reports in which most of the patients had asymmetrical limb swelling. Here, we summarized the previously reported cases of TSC with lymphedema in children (Supplemental Table 1) and found that lower extremity involvement (12/16) and abdominal distension (4/16) were more common than other symptoms in these cases. Six patients were treated with sirolimus or everolimus, among whom symptoms were relieved in three, treatment was ineffective in two, and treatment was discontinued due to severe side effects in one. It has been reported that children with TSC have benign vascular lymphatic malformations[10]. The etiology of lymphedema in these children with TSC is unknown but may be due to abnormal activation of the mTOR signaling pathway, resulting in abnormal lymphatic system structure.

The function of lymphatic vessels is to recycle interstitial fluid into the blood circulation, thus providing the necessary conditions for the maintenance of normal fluid homeostasis, fat absorption, and immune response in the body. The walls of most lymphatic vessels are composed of a single layer of lymphatic endothelial cells, which originate from veins in the embryonic stage and gradually migrate to the periphery to form a distribution network[11]. Lymphangiogenesis is under the control of a tightly orchestrated equilibrium among numerous players. VEGFR-3, VEGF-C/D, PROX1, podoplanin, LYVE-1, ephrinB2, FOXC2 and so on are involved in the process[12]. VEGFR-3 is activated by its ligand, VEGF-C, to promote lymphatic vessel proliferation and cell migration[13]. Several studies have shown that VEGF-C activates the downstream mTOR/S6K signaling pathway[14,15]. Activated mTOR functions through p70S6 kinase (S6K). mTOR participates in lymphangiogenesis. Immunohistochemistry indicated that mTOR expression was significantly increased in the lymphatic endothelial cells of PIL patients[16]. Therefore, mTOR is abnormally activated in lymphatic vascular endothelial cells under conditions of lymphatic vascular malformation[17].

Rapamycin and other mTOR inhibitors are widely used in the treatment of vascular malformations, including lymphangiomyomatosis in patients with TSC, with excellent therapeutic effects[18]. Everolimus is also effective in the treatment of PIL[16]. Supplemental Table 1 describes six cases of TSC complicated with lymphoid swelling that were treated with an mTOR inhibitor, which was effective in three cases. Rapamycin is an mTOR inhibitor that targets p70S6 kinase to deactivate and inhibit its phosphorylation. In human lymphatic endothelial cells, VEGF-C/VEGFR-3 activates p70S6 kinase to promote its phosphorylation. Rapamycin completely blocks the phosphorylation of p70S6 kinase and thus blocks the activity of the VEGF-C/VEGFR-3 pathway, thereby impeding lymphangiogenesis[19]. Because administration of rapamycin in children is approved only for renal transplantation and everolimus is approved only for subependymal giant cell astrocytoma in China, we did not administer the drug to this patient. mTOR inhibitors have shown very good prospects in the treatment of vascular malformations, and their side effects are known. If the indications for these drugs expand, they might be better for patients than are currently approved drugs.

In this patient, PIL appears to be a clinical manifestation of TSC and may be caused by abnormal activation of mTOR after TSC1 mutation, resulting in intestinal lymphatic hyperplasia, lymphangiectasia, and finally poor efflux of tissue fluid. Therefore, the authors maintain that TSC screening, such as mTOR immunohistochemistry of pathological intestinal biopsies and genetic evaluation of blood samples, should be routine for patients diagnosed with PIL to assist in etiological diagnosis. Hypomelanotic macules, epilepsy, dental enamel pits, or other manifestations in patients are especially strongly suggestive of TSC, and active screening is needed to avoid delayed diagnosis and treatment. Etiological diagnosis allows for targeted treatment strategies that could include rapamycin. However, selection bias may exist due to the small number of cases. Further studies with large samples of patients with PIL and TSC, allowing minimization of selection bias, are in great need. There are other etiologies that lead to PIL, as the regulation of lymphangiogenesis is controlled by a complex network. The mTOR/S6K signaling pathway is the main downstream pathway of VEGF-C/VEGFR-3 but not the only pathway[13]. Further investigation in this direction would help us to understand the disease and increase patients’ quality of life.