We treated a 56-year-old woman with PPC after bilateral mastectomy, hysterectomy, and bilateral salpingo-oophorectomy. This patient had primary drug resistance and died 12 mo after the diagnosis of PPC. The genetic test performed on this patient indicated the presence of a germline BRCA1 mutation. We searched the PubMed, Scopus, and Cochrane databases and extracted studies of patients with BRCA mutations who developed PPC after PSO. After a detailed literature search, we found 30 cases, 7 of which had a history of breast cancer, 14 of which had no history of breast cancer, and 9 of which had an unknown history. The average age of PSO patients was 48.86 years old (range, 31-64 years). The average time interval between the diagnosis of PPC and preventive surgery was 61.03 mo (range, 12-292 mo). The 2-year survival rate for this patient population was 78.26% (18/23), the 3-year survival rate was 50.00% (9/18), and the 5-year survival rate was 6.25% (1/16).

Patients with BRCA mutations who are diagnosed with PPC after preventative surgery have a poor prognosis. Prevention measures and treatments for these patients need more attention.

Core tip: To the best of our knowledge, this is the first article to describe the survival and prognosis of primary peritoneal cancer (PPC) after prophylactic salpingo-oophorectomy (PSO) in patients with hereditary breast and ovarian cancer. Previous studies have shown that PPC patients with BRCA mutations have better therapeutic outcomes and prognosis, but the patient we reported showed primary resistance to initial treatment and only survived for 12 mo. We found that the 3-year survival rate was 50.00% (9/18) and the 5-year survival rate was only 6.25% (1/16) for patients with PPC after PSO, which is different from our previous perceptions, and these results are surprising.

Hereditary breast and ovarian cancer (HBOC) syndrome is an autosomal dominant genetic disease[1], accounting for approximately 10%-15% of ovarian cancer cases and 5% of breast cancer cases[2]. It is estimated that 25% of HBOC syndrome cases are caused by mutations in BRCA1 and BRCA2[3]. Women with BRCA1/2 mutations have an increased risk of breast and ovarian cancer and are counseled to undergo prophylactic salpingo-oophorectomy (PSO) to reduce the 85% risk of coelomic epithelial cancer and the 25% risk of breast cancer[4]. However, approximately 1.0%-1.7% of HBOC patients are considered to be at risk for primary peritoneal cancer (PPC) after PSO[5-8]. Although PPC patients with BRCA mutations have longer progression-free survival and overall survival compared with BRCA mutation noncarriers[9], the prognosis of PPC patients after PSO is still unclear.

In this article, we report a patient who developed PPC after bilateral mastectomy and PSO surgery. This patient presented with primary drug resistance and died 12 mo after the diagnosis. We summarize the treatment of patients with PPC after PSO surgery reported in the literature to analyze the prognosis of this group of patients.

In January 2018, a 56-year-old woman came to our hospital complaining of obvious abdominal distension, lower extremity edema, and difficulty breathing for three days.

She had received diuretic treatment in a local hospital for lower extremity edema 5 d ago, following which the symptoms of edema improved.

The patient had a history of hypertension for approximately 20 years, had blood pressures of up to 200/110 mmHg, and took oral Betaloc, Irbesartan, and Sulvastatin calcium tablets daily, with good blood pressure control achieved. The patient’s father died of cardiac cancer, and her mother died of coronary heart disease without a history of carcinoma. The patient had a total of 7 siblings, and the eldest sister had a history of double mastectomy for breast cancer. Figure 1 is a detailed family diagram for the patient.

We performed a careful physical examination and found that the patient’s bilateral groin areas had several swollen lymph nodes, and the largest one was approximately 1 cm × 2 cm. The patient had edema (++), which was nondepressed, was positive in the abdomen, and had no obvious tenderness or rebound tenderness. Bilateral breath sounds were reduced, and percussion of the chest showed dullness. No obvious abnormalities were found in the gynecological examination.

The patient’s abdominal and pelvic computed tomography (CT) scan results on January 9, 2018 were as follows: (1) Bilateral pleural effusion, ascites, and subcutaneous edema of the chest and abdomen; (2) Mild pericardial thickening; (3) A small inflammatory lesion in the right lung; (4) Mediastinal and double inguinal lymphadenopathy; (5) Bilateral breast and uterus absence; and (6) Mild fatty liver. Gynecological ultrasound examination results on January 8, 2018 were as follows: (1) After hysterectomy; and (2) Pelvic and abdominal effusion.

The final diagnosis of the presented case was PPC.

The patient underwent laparoscopic partial omentectomy on January 22, 2018. No obvious solid tumor lesions were found during the operation. The omentum was thickened with multiple miliary lesions and could not be completely removed due to the dense adhesion to the intestine. Postoperative pathology indicated high-grade serous adenocarcinoma. The postoperative chemotherapy regimen for this patient is given in Figure 2. During the treatment, we changed treatment programs because the pleural effusion and ascites increased repeatedly, as can be observed in Figure 3, and the chemotherapy ended on August 27, 2018. The germline BRCA testing is shown in Table 1. In addition, multiplex ligation-dependent probe amplification was used to detect all exons and adjacent splicing regions of the BRCA1 and BRCA2 genes, and no abnormal copy number (large fragment deletion) was found. 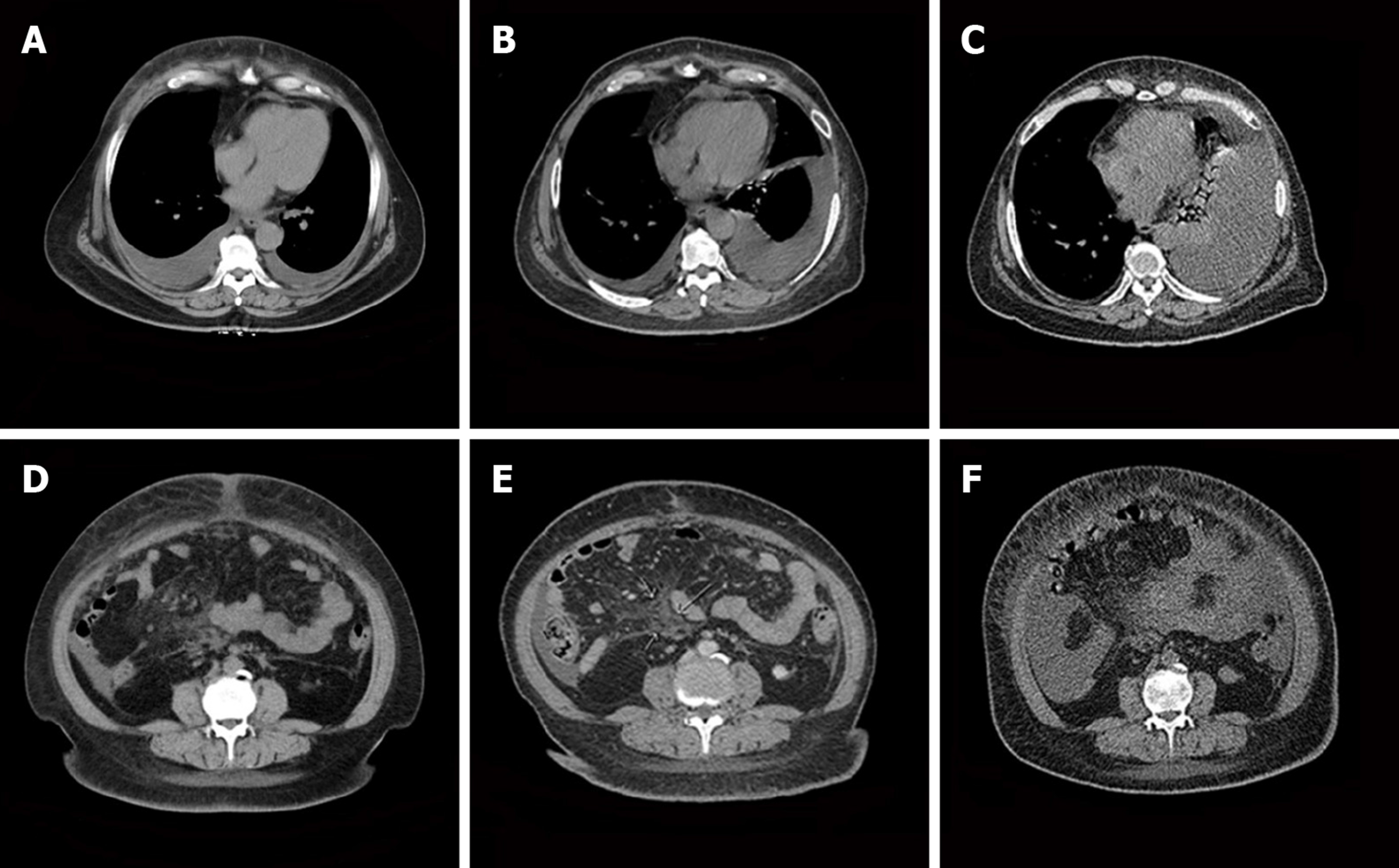 Serum cancer antigen (CA)-125 levels did not fall to normal levels after surgery. The patient died 12 mo after diagnosis of the disease.

We searched the PubMed, Scopus, and Cochrane databases and extracted studies of women with BRCA mutations who developed PPC after PSO and summarized their case information.

To the best of our knowledge, this is the first article to describe the survival and prognosis of PPC after PSO in patients with HBOC. Previous studies have shown that patients with BRCA mutations have better therapeutic responses and prognosis, but the patient we reported showed primary resistance to the initial treatment and only survived for 12 mo. We calculated that the 3-year survival rate was 50.00% (9/18), and the five-year survival rate was only 6.25% (1/16), which was different from our previous notion, and these results are surprising.

The cumulative risk of ovarian cancer, fallopian tube cancer, and PPC in BRCA1 mutation carriers is estimated to be 11% to 54% or higher, and the lifetime risk of ovarian cancer in BRCA2 mutation carriers is estimated to be between 11% and 27%[5]. There is strong evidence that for patients with HBOC syndrome, PSO significantly reduces the incidence of ovarian cancer by 81%-85%[4,18]. However, the protection is incomplete, the sine probability of developing PPC after PSO surgery is 1.0%-1.7%[5-8], and PSO may also result in surgical complications such as infections, blood clots, cardiovascular and cerebrovascular risks, and even death. After PSO, artificial menopause may also lead to the occurrence of osteoporosis and the risks associated with it[19]. Some patients also need long-term hormone replacement therapy[20]. In terms of surgical methods, laparoscopic surgery is preferable to laparotomy, and the incidence of postoperative complications is 9%, of which 1%-2% are severe[21].

In 1982, Tobacman et al[22] first described cases of peritoneal cancer after prophylactic surgery. The study included 16 families, and at least two relatives in each family were diagnosed with ovarian cancer. Twenty-eight women in 16 families underwent prophylactic oophorectomy and were followed for 1-20 years. During that period, three people were diagnosed with PPC at 1 year, 5 years, and 11 years and died of disease progression 2 mo, 21 mo, and 12 mo after diagnosis. The authors did not analyze the three patients at the genetic level; however, they may carry BRCA mutations, which are consistent with the characteristics of HBOC. Finch et al[12]’s prospective study of 1045 patients estimated that the cumulative incidence of peritoneal cancer in BRCA mutation carriers was 4.3% within 20 years of PSO. Peritoneal cancer is more likely to occur in BRCA1 mutation carriers after PSO surgery, and it is very rare in BRCA2 mutation carriers. In the literature review we conducted, only one incidence of peritoneal cancer with BRCA2 mutation was found in a study by some researchers[5,7,10-12,14,17,18,22-26]. In the report by Finch et al[12], a woman with a BRCA2 mutation, who had no history of breast cancer, underwent prophylactic bilateral salpingo-oophorectomy and hysterectomy at age 46. She was then diagnosed with PPC when she was 49 years old, and she died of disease progression at the age of 52.

There are several hypotheses on the source of peritoneal cancer after surgery. The first one is that there may be residual oviduct tissue left during the PSO, leading to recurrence of ovarian cancer or fallopian tube cancer, and this theory emphasizes the need to completely remove the fallopian tubes. Preservation of the uterus during PSO may result in residual proximal tube, and the proximal end of the fallopian tube is more susceptible to carcinogenesis than the distal end; however, prevention of uterine resection during surgery seems unnecessary[17]. This hypothesis also explains the previous findings that the incidence of ovarian cancer in patients with BRCA mutations who have undergone tubal ligation has decreased[24,27,28]. Second, the specimens taken during the prevention of surgical resection are not comprehensive, and occult cancer is not found[5]; however, the clinically reported frequency of occult cancer found in PSO is 2%-17%[16,29-34]. Third, cancerous oviductal epithelial cells may flow into the abdominal cavity before resection during surgery and may lead to peritoneal cancer after many years[35]. The fourth hypothesis is that primary ovarian epithelial cancer, fallopian tube cancer, and PPC may originate from Mullerian hormones due to histological similarities between ovarian and peritoneal cancer[36].

There are higher progression-free survival and overall survival rates in ovarian cancer patients with BRCA mutations than in patients without[9]. The three-year survival rate of BRCA1 and BRCA2 mutation carriers was 70% and 80%, respectively, and for the noncarriers, it was only 67%[37]. However, this survival advantage does not last more than 10 years after follow-up[38]. Unfortunately, the prognosis of HBOC patients with PPC who have undergone PSO is poor. Because of this, we reviewed a large number of documents and calculated the 3-year and 5-year survival rates of these patients; they were 50.00% and 6.25%, respectively, which gave us a new understanding of this disease.

Current research suggests that women with BRCA1 or BRCA2 mutations should undergo prophylactic oophorectomy at age 35 or once they have finished bearing children[12,39]. However, there is still a lack of accurate and effective screening measures. Pelvic examination and transvaginal ultrasound are the standard methods for diagnosing ovarian tumors, but these are inadequate for screening because of their poor sensitivity. CA125 is a widely accepted serum biomarker for ovarian cancer, but it is a poor indicator in early-stage patients, with a sensitivity of approximately 40%[40]. In addition, due to the low incidence and atypical symptoms of peritoneal cancer, screening is more difficult.

Unfortunately, the postoperative treatment of the patient in this article did not include PARP inhibitors because the drugs were not available in China at that time; PARP inhibitors may have improved the survival of this patient.

In conclusion, approximately 1.0%-1.7% of carriers of BRCA1/2 mutations can develop PPC after PSO, and these patients are mainly BRCA1 mutation carriers. The treatment of this patient population is not effective, and the prognosis is very poor. There are no effective screening and preventive measures, and we should pay more attention to the diagnosis and treatment of this patient population. The conclusions we draw from this case report need to be confirmed by prospective studies.

We thank Hui Zhang for providing this case.