Panniculitis, polyarthritis, and pancreatitis (PPP) syndrome is a triad comprising an extremely rare extra-pancreatic complication of pancreatic disease. Herein, we describe a patient with PPP syndrome caused by fistula formation between the inferior vena cava (IVC) and pancreatic pseudocyst.

A 64-year-old man visited the hospital with bilateral leg pain that began one week prior. He had no specific diseases, except hypertension. His vital signs were normal. Blood test revealed the following findings: White blood cell count, 28690/µL; amylase level, 9055 U/L; lipase level, 2089 U/L; and C-reactive protein level, 12.94 mg/dL. Computed tomography of the pancreas revealed recent acute pancreatitis. Nonsteroidal anti-inflammatory drugs were administered with no improvement. After steroid administration, pain slightly improved. Skin lesions were diagnosed as panniculitis. Bone scan and knee magnetic resonance imaging revealed osteoarthritis and bone marrow infarctions. Surgical treatment was considered; total pancreatectomy with splenectomy was performed. A pseudocyst was present posterior to the head of the pancreas, forming a fistula with the suprarenal IVC. After surgery, amylase and lipase levels decreased. However, the patient died of an uncontrolled infection on the 13th postoperative day.

PPP syndrome should be suspected when accompanied by skin and joint lesions. Delays in diagnosis could have catastrophic consequences.

Core tip: Panniculitis, polyarthritis, and pancreatitis syndrome must be considered when skin lesions and joint symptoms are associated with suspected pancreatitis. Treatment of the causative pancreatic disease is helpful in relieving symptoms. Surgical treatment is needed when fistulas of the pancreatic duct and systemic circulation formed. Delays in diagnosis could have catastrophic consequences.

A 64-year-old man visited the hospital with bilateral leg pain that began a week prior.

He had several nodular skin lesions on both knees and calves, and the lesions caused pain and edema. The patient did not complain of abdominal pain.

He had no specific disease, except hypertension; however, he had a history of alcohol abuse.

His vital signs were normal, and there were no specific findings, except skin lesions on both legs.

Computed tomography (CT) of the pancreas revealed a cystic lobulated lesion along the peripancreatic tail and a portion of the distal body with retropancreatic extension and a mild dilatation of the main pancreatic duct from the head to the tail. CT findings revealed potential recent acute pancreatitis or stricture at the periampullary level (Figure 1). 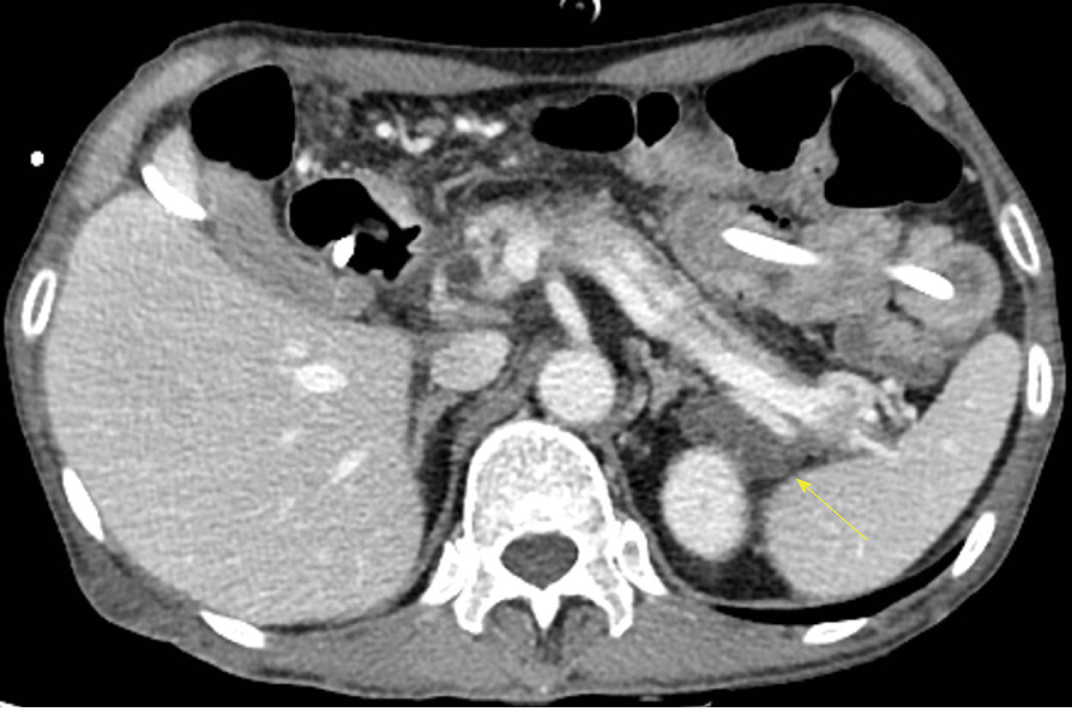 Figure 1 Computed tomography of the pancreas. Cystic lesion with an attenuated lobulated margin along the peripancreatic tail and distal portion of the body of the pancreas (yellow arrow).
Further diagnostic work-up

Based on the diagnosis of pancreatic panniculitis owing to the presence of pancreatitis; the patient was advised to fast and was administered antibiotics. Normal diet was resumed following improvement in skin lesions and joint symptoms. However, the patient complained of abdominal pain, and lipase levels increased to 12354 U/L; the patient was advised to fast again. Nonsteroidal anti-inflammatory drugs (NSAIDs) were administered for ankle arthritis; however, the pain became more severe. Following administration of a steroid, the pain showed minor improvement. Histological examination of the skin lesions was performed; a diagnosis of lobular panniculitis was made. Further laboratory tests were negative for antinuclear antibody, antineutrophil cytoplasmic antibody, C3/C4, and IgG/IgG4. Bone scan showed small hot lesions on both wrist joints. There was an increase in the uptake at the left 2nd and 3rd metacarpophalangeal joints and 2nd and 3rd distal phalanges. There was also an increase in the pathological nuclide uptake at the right 2nd metacarpophalangeal joint. Both knees had small hot lesions in the left and right tibial tuberosities. These findings could be attributed to the presence of osteoarthritis (Figure 2). Magnetic resonance imaging (MRI) was performed on the more painful left knee, which revealed diffuse multifocal ischemia or infarction in the bone marrow spaces of the left knee. Joint effusion and multiloculated fluid collection in the superficial and deep infrapatellar fat pad were also seen. MRI suggested an early stage of bone marrow infarction in the patella, proximal tibia, and distal femur (Figure 3). 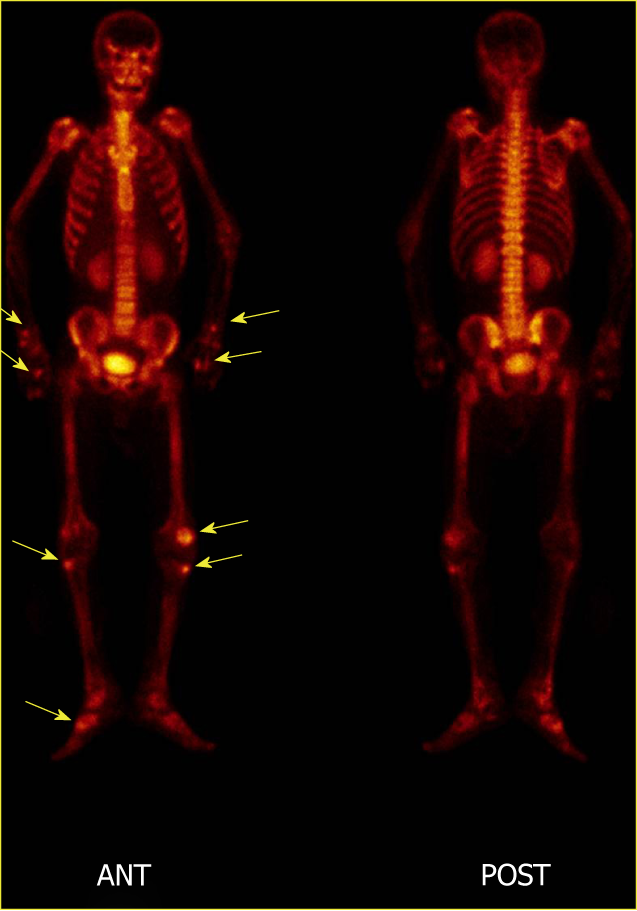 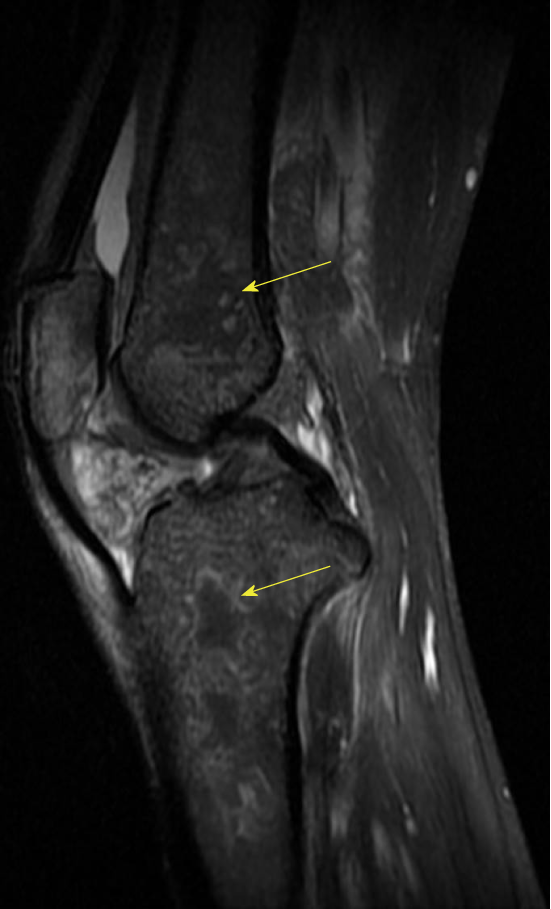 The patient was diagnosed with PPP syndrome, and his condition did not improve. Endoscopic retrograde cholangiopancreatography was performed to control pancreatitis; however, the guidewire could not enter the pancreatic duct and entered an unexpected path.

Because of the lack of improvement following medical treatment, surgical treatment was considered. We could not assess if the pancreatic pseudocyst and IVC formed a fistula preoperatively. Hence, we performed the Kocher maneuver owing to the planned total pancreatectomy. Simultaneously, the IVC and head of the pancreas were severely attached with a small cystic lesion. As the pancreas head was separated from the IVC, massive bleeding was encountered from the IVC. We performed a primary suture after isolating the proximal and distal IVC of the injured area. A pseudocyst was present in the posterior aspect of the pancreas, forming a fistula with the suprarenal IVC (Figure 4). We reviewed the CT after surgery and found that there was a small thrombosis in the IVC and a fistula could be suspected (Figure 5). 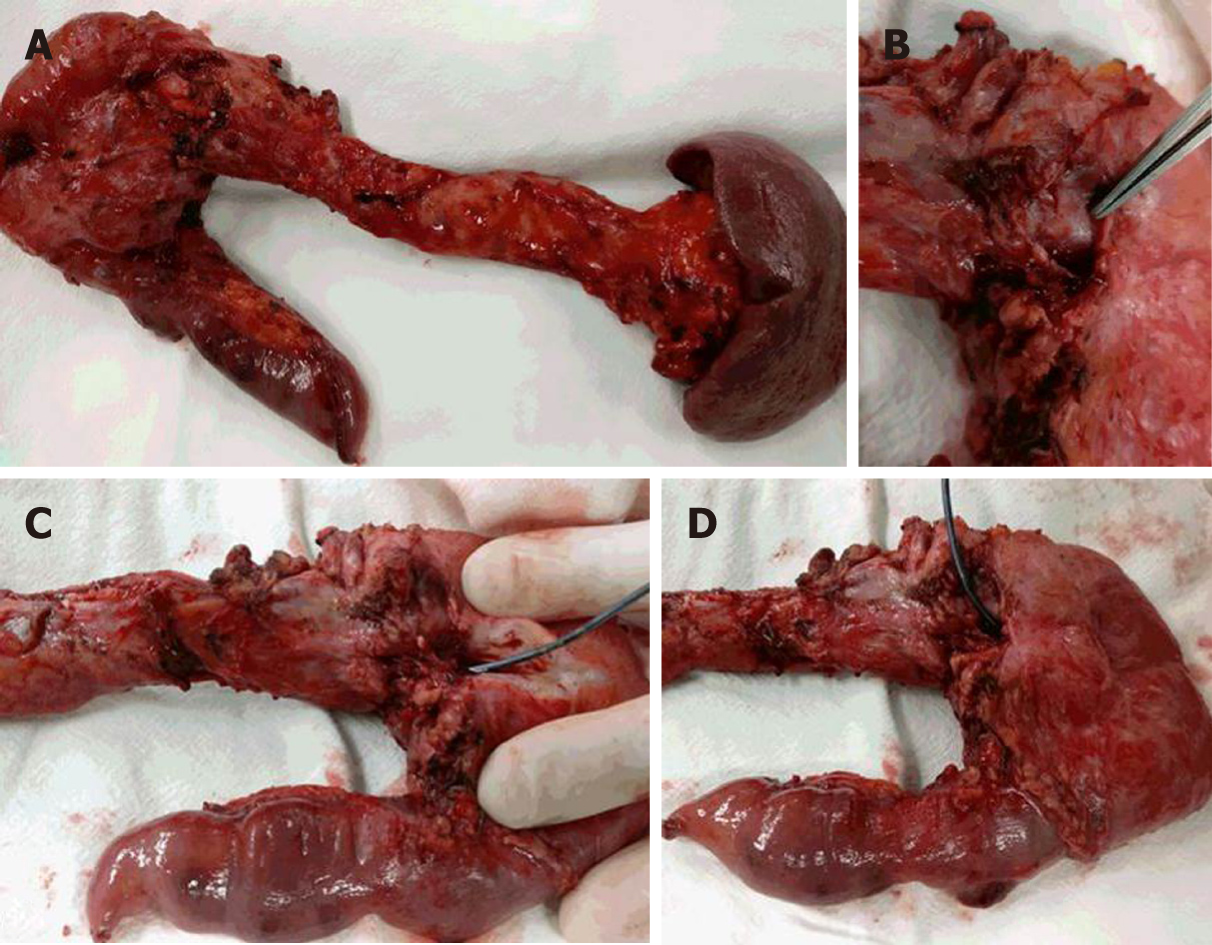 Figure 4 Surgical specimen. A: Total pancreatectomy with splenectomy performed; B: A pseudocyst is seen at the posterior aspect of the head of the pancreas; C and D: The probe proceeding to the main pancreatic duct through the pseudocyst. 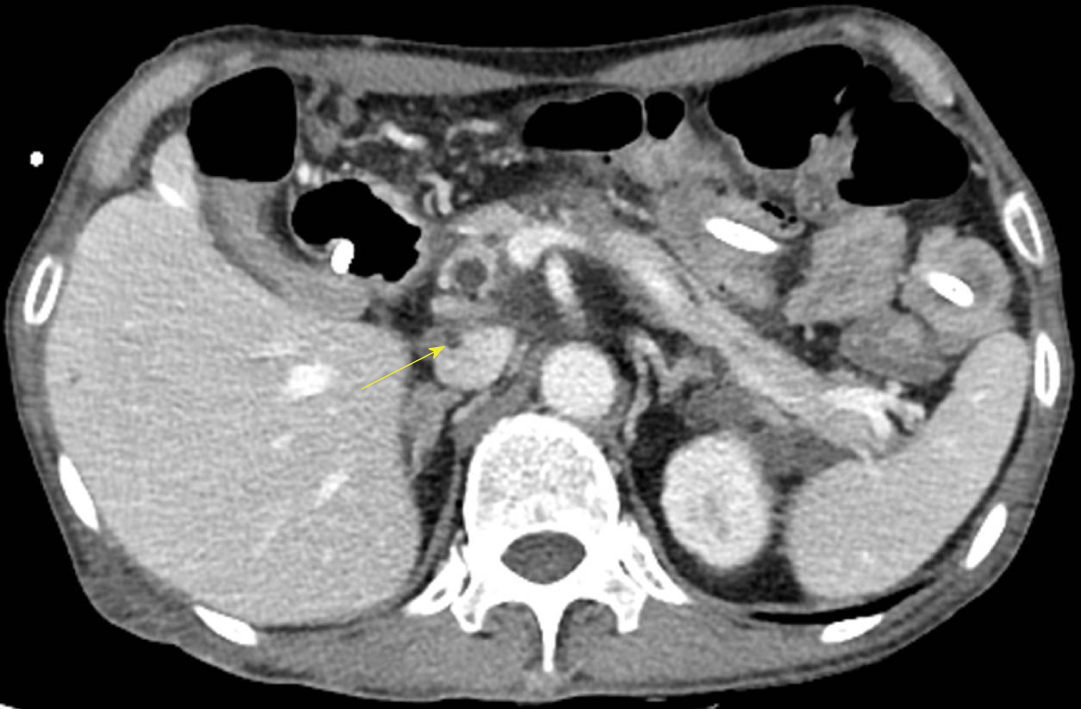 Figure 5 Computed tomography of the pancreas. Thrombosis in the inferior vena cava (yellow arrow) is seen.
OUTCOME AND FOLLOW-UP

After total pancreatectomy, amylase and lipase levels decreased; however, fever persisted, and pain and swelling in the left ankle and knee did not improve. Wound evisceration was noted 10 d postoperatively, and reoperation was performed. The patient died of uncontrolled infection on the 13th postoperative day.

The incidence of panniculitis owing to pancreatic disease is approximately 2%–3%[3]. Very rarely, arthritis with intraosseous fat necrosis occurs together in these patients to form a triad of pancreatitis, panniculitis, and polyarthritis, referred to in the literature as the PPP syndrome. Only about 70 cases have been published, most of which are case reports and only estimate the pathogenesis of the syndrome[4]. However, most authors believe that the pancreatic enzyme enters the systemic circulation for various reasons causing these symptoms to appear. In most cases, lipase levels were particularly increased; however, the degree of lipase does not indicate the severity of acute pancreatitis, but appears to be related to the degree of extra-pancreatic symptoms in PPP syndrome[2].

PPP syndrome can occur at any age but is typically common among middle-aged men with a history of alcohol abuse[6]. It may occur before, concurrently, or following the pancreatic manifestation. Primary pancreatic diseases include acute or chronic pancreatitis, pancreatic carcinoma, neuroendocrine carcinoma, insulinoma, ischemic pancreatic disease, abdominal trauma, and pancreatic duct stenosis. Some reports present cases of fistulas of pseudocyst and superior mesenteric vein; however, a fistula associated with inferior vena cava, as in the present case, has not been reported[2]. However, in this case, there was no suspicion of fistula between the pseudocyst and IVC before surgery, and massive bleeding occurred during surgery. If a fistula is suspected, such intraoperative complications may be prevented. A small fistula may be difficult to detect during surgery; however, if thrombosis is observed in the superior mesenteric vein, portal vein, or IVC on preoperative imaging, a fistula may be suspected[2].

In PPP syndrome, pancreatic panniculitis usually causes erythematous brown, exquisitely tender, edematous subcutaneous nodules in the lower limb. The size of the lesion may vary, and oily viscous material, formed by spontaneous ulceration of the adipocytes may be released. These skin lesions naturally improve with decrease in the inflammation of the pancreas[7]. These lesions are seen histologically as lobular panniculitis without vasculitis. A characteristic necrotic adipocyte called a “ghost cell” is observed; however, these findings are not seen in other forms of panniculitis[8]. The osteoarticular symptoms are polyarthritis, polyserositis, and intramedullary fat necrosis. Most joint symptoms appear before the diagnosis of pancreatic disease. The ankles, knees, and wrists are the commonly involved joints; however, multiple joints may be simultaneously involved. On synovial aspiration, a creamy substance with high fat content and high viscosity is observed. MRI is more sensitive than conventional radiographs and enables detection of intraosseous fat necrosis[9].

Treatment is primarily supportive and targets the underlying pancreatic disease. In the case of chronic pancreatitis owing to pancreatic duct stricture, relief of stenosis with pancreatic duct stent insertion may improve pancreatitis, panniculitis, and arthritis. In addition, when PPP syndrome occurs owing to pancreatic cancer, appropriate surgical resection is necessary[1]. Even if fistula of the pseudocyst and superior mesenteric vein or portal vein occurs, surgical treatment is required to reconstruct the superior mesenteric vein and portal vein by removing the fistula[2]. Surgical correction is also needed when fistula with IVC occurs simultaneously. In some cases, octreotide may be administered to reduce the production of pancreatic enzymes and improve symptoms. Administration of glucocorticoids and NSAIDs to improve skin lesions and arthritis is usually ineffective[1].