Ganglioneuroma (GN) is a rare neurogenic tumor that accounts for about 0.1%-0.5% of all tumors of the nervous system. It originates from neural crest cells. GN has no specific clinical symptoms or laboratory findings, which leaves it easily overlooked and misdiagnosed as other tumors. Retroperitoneal GN with very large volume and vascular penetration is extremely rare.

We present the imaging and pathological findings of a giant retroperitoneal GN in a child. A 4-year-old boy had suffered from postprandial vomiting for more than 6 mo with no precipitating factors. Abdominal computerized tomographic examination showed a giant cystic mass in the retroperitoneal area. After injection of contrast agent, the mass showed heterogeneous enhancement. Surgery with local excision of the mass was performed to address the embedded abdominal blood vessels, and the histopathological and immunohistochemical diagnosis of the mass was GN. Postprandial vomiting was relieved, and no complications occurred after the operation.

In the diagnosis of giant retroperitoneal hypodense masses in children, GN should be considered if the mass presents delayed enhancement, punctate calcification, and vascular embedding but no invasion. Pathology is the golden standard for the diagnosis of GN, and surgical excision is the optimal treatment for GN.

Core tip: Ganglioneuroma (GN) is a rare benign neurogenic tumor originating from the sympathetic nerve chain. Although it often occurs in the retroperitoneum, we report a case of giant GN causing postprandial vomiting and enclosing all major abdominal vessels, which is clinically rare. Surgical resection is the optimal choice for the treatment of GN at present. Pathology is the gold standard for the diagnosis of GN, and the presence of mucous matrix and ganglion cells are pathological features of GN.

Ganglioneuroma (GN) is a benign neurogenic tumor that accounts for more than 0.1%-0.5% of all tumors of the nervous system[1]. It commonly occurs in the mediastinum (41.5%) and retroperitoneum (37.5%)[1-3]. Patients are usually asymptomatic, and GN is often found via physical examination. However, the tumor can press against the adjacent organs and cause complications if it reaches a great enough size. Here, we introduce a case of a 4-year-old boy with giant retroperitoneal GN associated with postprandial vomiting enclosing the main abdominal vessels. To our knowledge, existing reports mention only small arteries passing through GN, and there is no previous work reporting GN enclosing so many large arteries. The aim of our report is to present a rare case and discuss the related clinical, imaging, and pathological features.

He had poor appetite but no weight loss during his illness.

The child was of full-term natural delivery with normal feeding and timely vaccination.

He had no previous or family history of similar illnesses.

Physical examination showed abdominal bulge and intestinal type in the upper abdomen. The epigastrium showed a palpable mass with poor mobility; the lump was hard but was associated with no tenderness.

The pre-contrast computerized tomographic (CT) scan presented a retroperitoneal giant hypodense mass with a size of 10.7 cm × 17.3 cm × 15.5 cm and a CT value of 33.8 HU. Spotted calcification with irregular distribution was noted in the mass. The tumor showed inhomogeneous flocculent enhancement in the venous phase and further enhancement in the delayed phase after intravenous injection of contrast agent (Figure 1). We observed that the stomach had been pushed forward and displaced, which was also considered the main cause of postprandial vomiting for the patient. The tumor surrounded the celiac trunk, hepatic artery, splenic artery, superior mesenteric artery, bilateral renal artery, and portal vein. Nevertheless, the enclosed vascular lumen did not become narrowed or distorted (Figure 2 and 3). Of course, this created a difficult problem for the patient’s surgical treatment, such that the surgeon was only able to remove the relatively non-vascular part of the tumor. 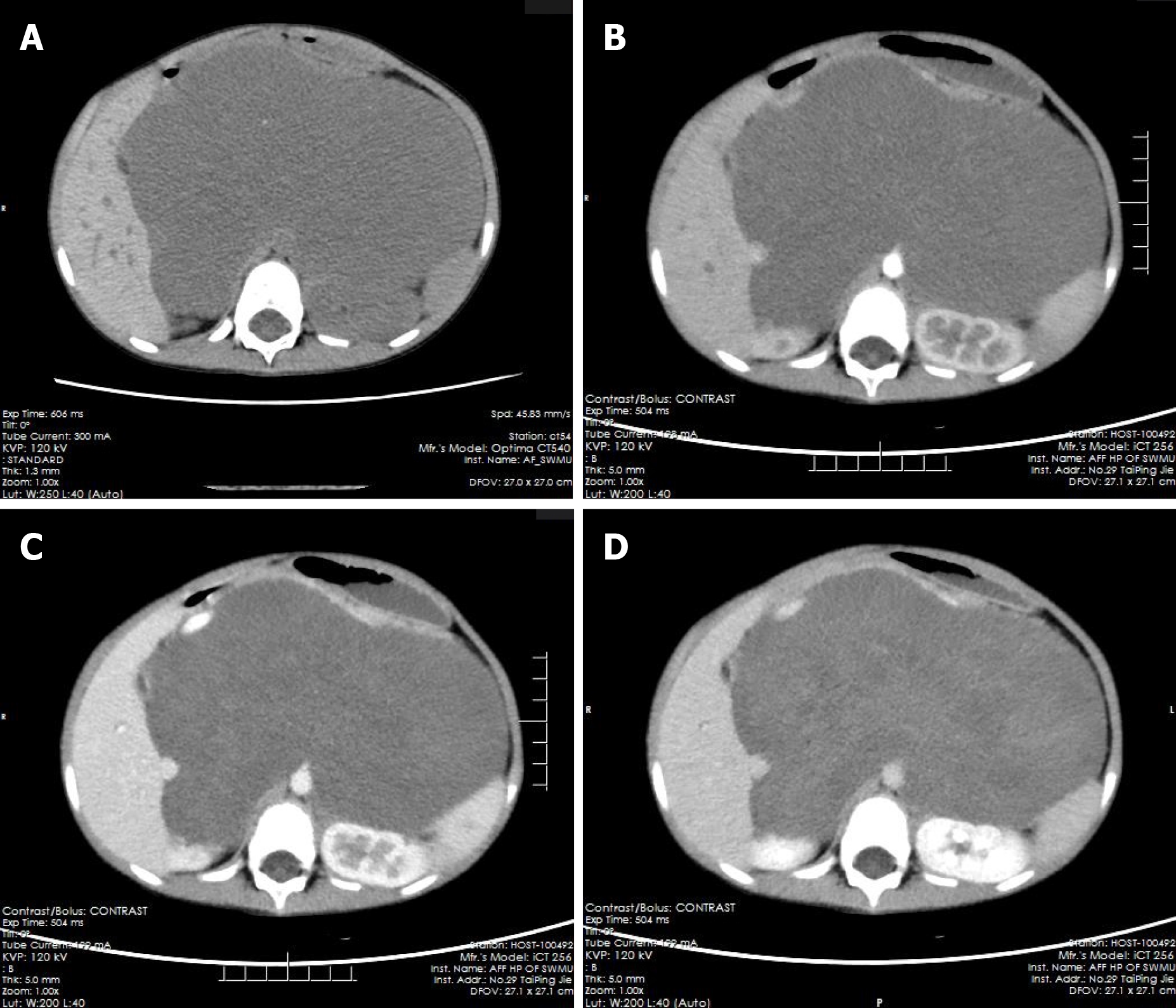 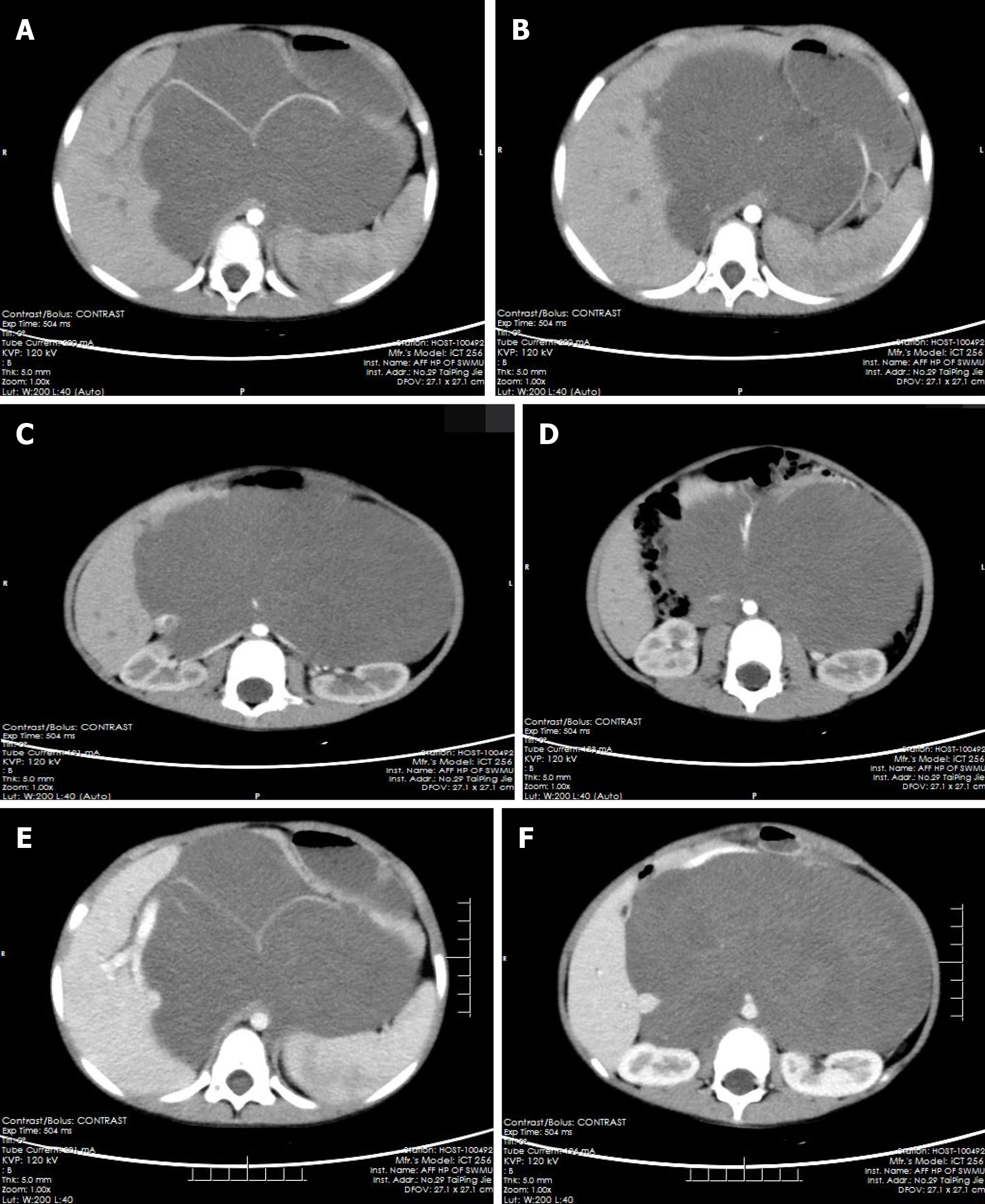 Postprandial vomiting was relieved, and no complications occurred. The patient was discharged 10 d after surgery. The patient’s parents declined follow-up after discharge and did not disclose their reasons.

Retroperitoneal GNs account for 37.5% of all GNs and about 0.72%-1.6% of primary retroperitoneal tumors[1-3]. GNs can also occur in the vertebra, neck, and cerebellopontine angle region (trigeminal); all three of which are relatively rare[4-8]. GNs are found incidentally in most cases and manifest as asymptomatic masses[2,9,10]. The tumor could cause some complications if it becomes large enough to press against the adjacent organs. In our case, the stomach dilated after meals, peristalsis became limited after means due to the compression from the GN, and food could not easily enter the duodenum, causing postprandial vomiting. Occasionally, GNs occurring in the adrenal gland can secrete vasoactive intestinal peptides, dopamine, and cortisol, which lead to diarrhea, hypertensive crisis, and male-like metabolic disorders in women[11-13].

GNs are mainly composed of ganglion cells, mucus matrix, nerve fibers, and mature Schwann cells, and the first two of them are characteristic components in histopathology[14,15]. The pathological features of GN are closely related to its CT findings. The presence of mucus matrix in tumors determines the hypodensity on plain CT scans. The mucus matrix has been found to delay the absorption of contrast agents, which leads to the delayed enhancement of GNs[16,17]. This case was misdiagnosed as retroperitoneal cystic lymphangioma initially. Similar to this case, cystic lymphangioma tends to occur in children and presents as a large, well-defined low-density mass in the retroperitoneum[18], which can also wrap around blood vessels without distorting them, while a retroperitoneal GN of such a large size as this case is rare and it is predominant in adults. However, in this case, flocculent and strip delayed enhancement was observed, which was consistent with the enhancement of GN, while cystic lymphangioma was generally not enhanced, which was the most important distinguishing point between them. Calcifications have been noted in 20%-60% of GNs, and most of them are punctate, which is also one of the differences between GN and neuroblastoma[19,20]. Punctate calcification with scattered distribution was also noted on plain CT images in this case. Ko et al[14] and Duffy et al[21] suggested that the presence of fat components in GN may be one of the characteristics of GN, but their sample size was too small to verify this, and we did not notice any fat replacement in our case. Some scholars have proposed that the blood vessels are often surrounded or compressed by GNs instead of being invaded, although most of them are small vessels[16,22], and this finding further suggested that GNs are benign. In this case, GN enclosed all major abdominal vessels, including the celiac trunk, hepatic artery, splenic artery, bilateral renal artery, superior mesenteric artery, inferior vena cava, and portal vein. None of the enclosed vessels had a narrowed lumen or filling defect, which provided more reliable support for these scholars’ views. However, there are some reports suggesting that GNs could behave aggressively, and recurrence or malignant transformation[2,23,24] and complete surgical excision are the most optimal choice for the treatment[8,25]. Therefore, patients with GN still need long-term radiological follow-up. In addition, some scholars have put forward a different view, arguing that incomplete resection of GN does not increase the risk of progression if residual tumors are less than 2 cm in diameter[10]. We believe that it is important to determine whether the tumor is invasive before surgery and assess pathology to select the most suitable surgical method, an area in which we believe the current research into GN is lacking.

In conclusion, GNs appear as hypodense masses on plain scans and present delayed and mild enhancement on contrast enhancement. Pathology is the gold standard for the diagnosis of GN, and mucous matrix and ganglion cells are their important features. Surgical excision is the best treatment for GN, and postoperative radiotherapy and chemotherapy are unnecessary. However, in cases where it is difficult to completely dissect the tumors and blood vessels, partial resection could still relieve the pressure symptoms created by the tumors. Long-term radiological follow-up after the operation is necessary, even though the biological behavior of GN is benign, because there is still a tendency to be malignant, especially in patients with GN who have undergone only local resection.

Retroperitoneal GN, which is huge and encloses a large number of blood vessels without invading, is rare in clinical settings. Although some previous studies maintain that complete resection of the tumor is not necessary, finding suitable ways of assessing the invasiveness of GN after pathology and radiology still needs further discussion and study.