Mixed epithelial and stromal tumors of the kidney (MESTKs) are a rare entity (about a hundred cases reported). They occur almost exclusively in postmenopausal women, with only seven cases reported in men. As this entity is very rare, little is known on its imaging features, especially magnetic resonance imaging (MRI) findings. In women, at MRI, the cystic component shows T1 hypointensity and T2 hyperintensity, while the solid component shows T1 hyperintensity and T2 hypointensity.

We report the computed tomography (CT) and MRI findings of MESTK in a 19-year-old male adolescent. To our knowledge, this case report is the first report of MRI findings of MESTK in male adolescents. The patient was admitted to Subei People's Hospital (Jiangsu Province, China) in July 2017 after a renal mass on the left side was detected by ultrasound during a clinical examination. Blood tests were all normal. Non-enhanced CT showed a round, well-circumscribed complex mass, approximately 45 mm × 40 mm in size. MRI revealed a clear well-circumscribed mass with a mixed arrangement of solid and cystic components. On T2 weighted images, some hypointensities were found in the solid areas. After contrast enhancement, moderate or mild enhancement was found in the solid component, which increased with time. A radical left nephrectomy was performed. The pathology analysis revealed a mixed epithelial and stromal tumor. The patient had no imaging findings of recurrence or metastasis at 12 months following surgery.

The possibility of MESTK should be considered in male adolescents. MRI can provide useful information for the preoperative diagnosis.

Core tip: Mixed epithelial and stromal tumors of the kidney (MESTKs) are rare benign tumors that occur predominantly in women. Little is known on its imaging features, especially magnetic resonance imaging (MRI) findings. We report the computed tomography and MRI findings of MESTK in a 19-year-old male adolescent. To our knowledge, this is the first report of MRI findings of MESTK in male adolescents. Although it occurs predominantly in menopausal women, the possibility of MESTK should be considered in male adolescents with a cystic solid mass in the kidney. MRI can provide useful information for the preoperative diagnosis.

Mixed epithelial and stromal tumor of the kidney (MESTK) is a rare type of tumor with about a hundred cases reported in the literature[1]. MESTKs are solid tumors that include both stromal and epithelial components, as well as spindle cells that look like ovarian stroma, especially since these cells also express the estrogen and progesterone receptors[2]. MESTKs are benign tumors and are often treated by surgery. Some cases of concomitant MESTK and sarcoma have been reported[3-8], but they are too rare to reach any conclusion about the natural history of the disease.

According to previous reports, the lesions occur almost exclusively in postmenopausal women[1,9-12]. Only seven cases have been reported in men[9,13-16]. Due to its rarity, accurate diagnosis before surgery is difficult since the ultrasound and magnetic resonance imaging (MRI) features are poorly known, but computed tomography (CT) usually shows a well-circumscribed, multiseptate cystic and solid mass with delayed enhancement[11-13]. On MRI, the cystic component shows T1 hypointensity and T2 hyperintensity, while the solid component shows T1 hyperintensity and T2 hypointensity, at least in women[12]. To our knowledge, there have only been three cases of MESTK in male adolescents reported in the English literature, and the MRI findings were not described[17-19].

In this report, we describe the CT and MRI findings in a 19-year-old man diagnosed with MESTK, focusing on MRI, and provide a review of the literature.

A 19-year-old man was found to have a renal mass on the left side during a clinical examination.

The patient was admitted to Subei People's Hospital (Jiangsu Province, China) in July 2017 after a renal mass on the left side was detected by ultrasound during a clinical examination. The initial diagnosis was renal tumor.

The patient had no hematuria, urinary urgency, or cold fever. Physical examination showed no evidence of any abdominal mass.

A non-enhanced CT (Lightspeed VCT 64; GE Healthcare, Milwaukee, WI, United States) scan showed a round, well-circumscribed complex mass, approximately 45 mm × 40 mm in size. A contrast-enhanced CT scan showed delayed enhancement of the solid part of the mass and no enhancement of the cystic part of the mass (Figure 1). MRI (GE Signa EXCITE HD, Milwaukee, WI, United States) was performed using fast spin echo T2 weighted images (T2WI), as well as non-enhanced and contrast-enhanced T1 weighted images (T1WI), which revealed a clear well-circumscribed mass with a mixed arrangement of solid and cystic components. On T2WI, some hypointensities were found in the solid areas. After contrast enhancement, moderate or mild enhancement was found in the solid component, which increased with time (Figure 2). 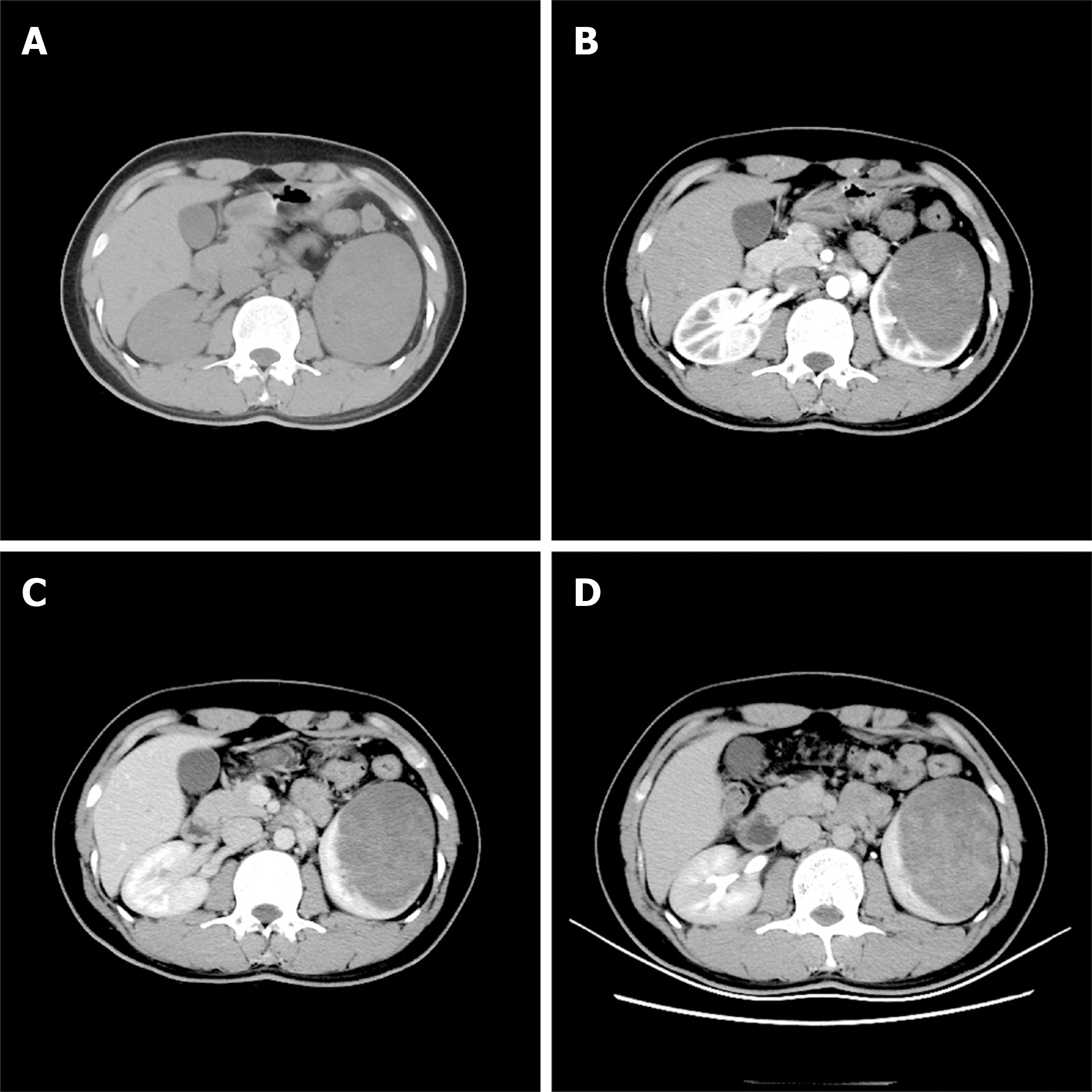 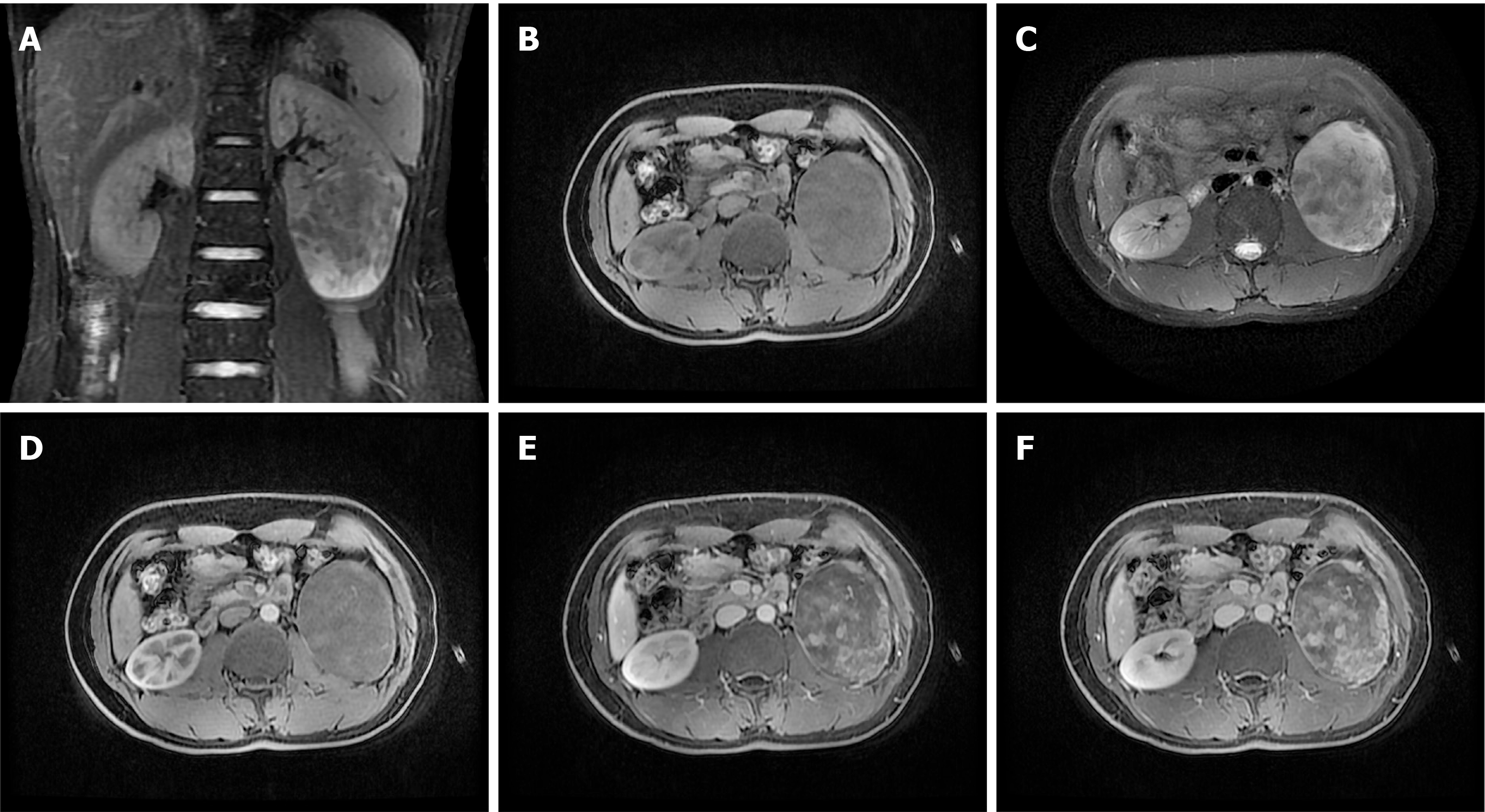 Figure 2 Moderate or mild enhancement in the solid component after contrast enhancement. A: Coronal T2-weighted image showing an exophytic cystic-solid mass in the lower pole of the left kidney; B: Cystic region shows T1 hypointensity and T2 hyperintensity; C: Solid region shows T1 hypointensity and T2 hyperintensity; D: Contrast-enhanced magnetic resonance imaging during the corticomedullary phase; E: Nephrographic phase; F: Excretory phase showing that the tumor’s cystic parts were not enhanced and the tumor’s solid parts were enhanced to a moderate or mild degree that increased with time.
FINAL DIAGNOSIS

The preoperative diagnosis was renal carcinoma. After surgery, the gross specimen showed a well-circumscribed mass with a white texture that looked like fish flesh (Figure 3). Microscopically, the tumor consisted of stroma and epithelium. The stroma consisted primarily of hypocellular fibrous cells with hyperplastic fibers and vessels, which constituted the largest proportion. Renal tubules with single-layer cubic cell lining were found in the epithelium (Figure 4). Immunohistochemistry revealed smooth muscle that was actin-positive, desmin-positive, H-caldesmon-positive, Gata-3-positive, and ki67-negative. The pathology analysis revealed a mixed epithelial and stromal tumor. 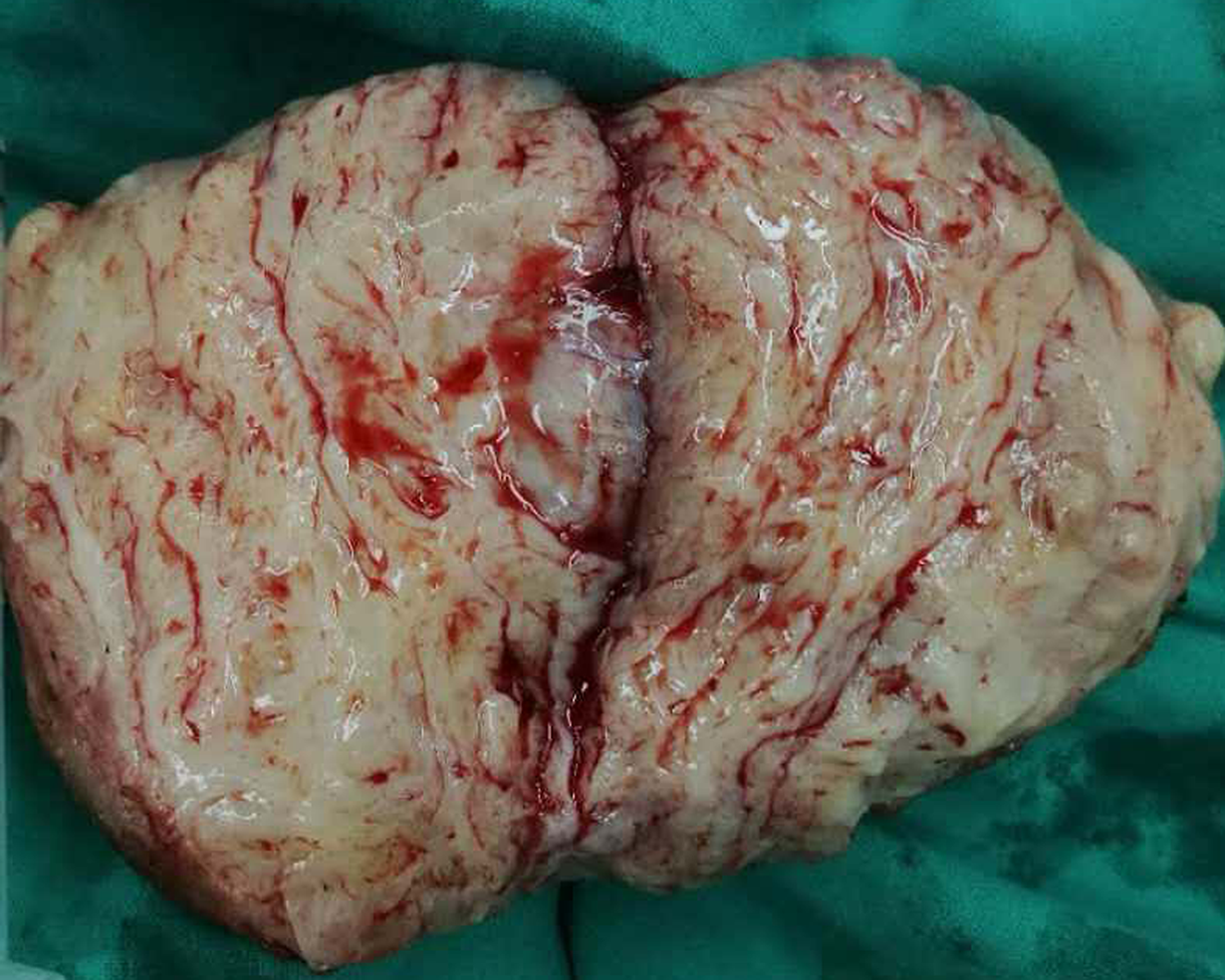 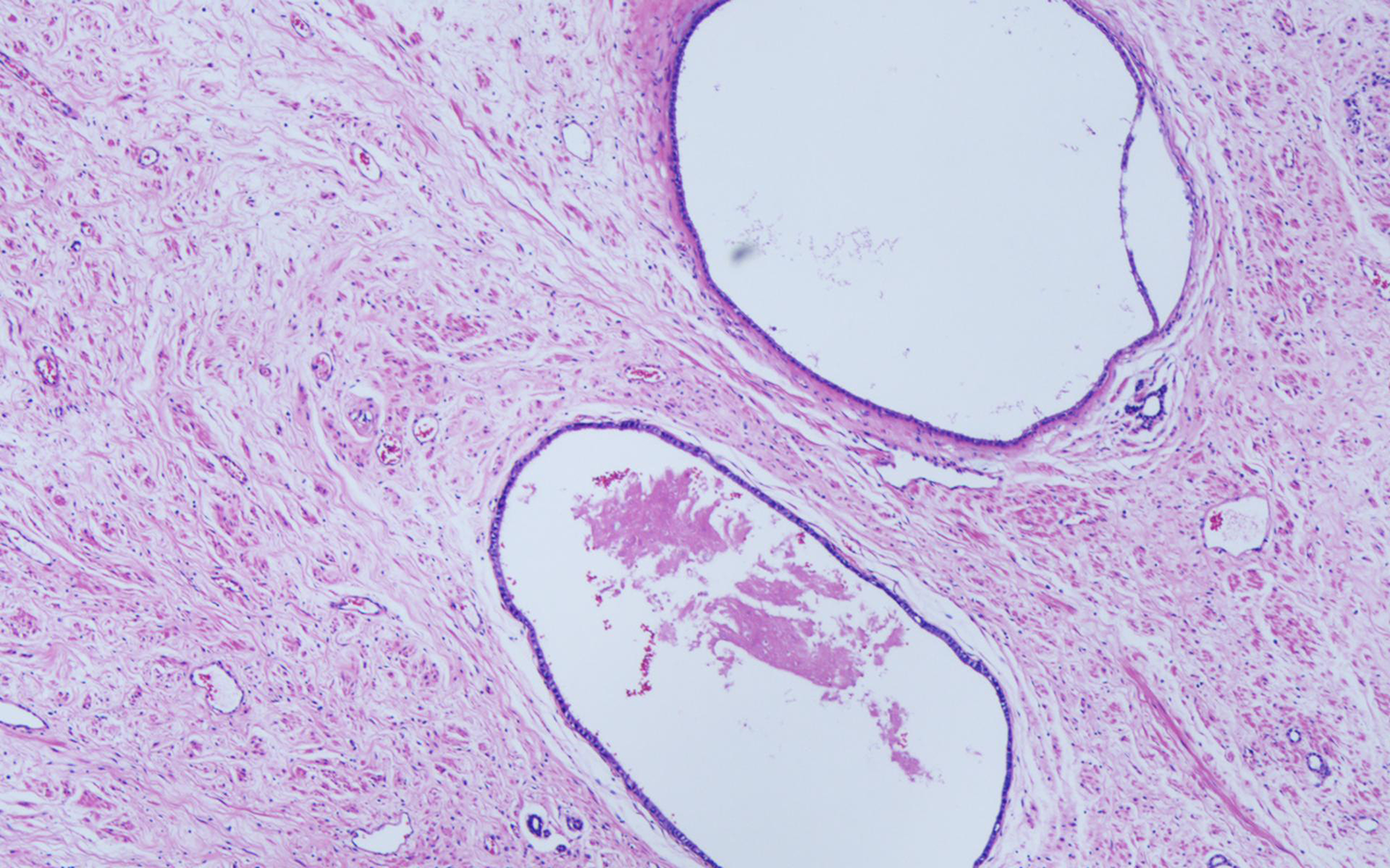 Figure 4 Histopathology. Microscopically, the tumor was composed of fibrous cells arranged in bundles. Fiber growth was observed in the lesion. Small tubular structures were observed within and around the tumor (magnification, ×100).
TREATMENT

A radical left nephrectomy was performed.

The patient recovered well and was discharged for rehabilitation after 13 d. He had no imaging findings of recurrence or metastasis at 12 mo following surgery.

MESTK is a rare, complex tumor composed of a mixture of cystic and solid areas that was first described in a case report by Michal et al[10] in 1998. At present, the pathogenetic mechanism of MESTK and its relationship to other renal neoplasms are still unclear. Most cases occur in menopausal woman (approximately 1:6 male-to-female ratio) and some cases had a long-term history of estrogen therapy[9,11,20-22]. Therefore, the hormonal milieu may play a critical role in the tumorigenesis of MESTK. Adsay et al[9] reported that the spindle cells of these lesions may arise from a periductal fetal mesenchyme which may have the capacity to interact with the epithelium. Hormone receptor positivity was detected in the mesenchyme of most MESTKs. A deranged hormonal milieu induces the proliferation of this mesenchyme, which in turn drives the growth of the epithelial component. In the case reported here, MESTK occurred in a 19-year-old man, and three cases of MESTK in male adolescents have also been described[17-19]. Therefore, we assume that hormone secretion disorder in male adolescents may lead to the growth of neoplastic cells. The rarity of the disease precludes investigation into the matter and the exact pathogenesis of MESTK needs further research.

Because hormonal factor is closely related to tumor development, hormone treatment could be a potential therapeutic approach in treatment of MESTK. But preoperative radiologic diagnosis of MESTK is difficult, and its clinical treatment still follows the renal cell carcinoma protocol[22].

MESTK does not show any specific clinical manifestations. Most MESTK patients present with symptoms such as hematuria, abdominal pain, a palpable mass, or urinary tract infections[9,23,24]. Previous literature and this study reveal an increasing number of asymptomatic cases[11,25]. This could be because of advances in imaging modalities and the prevalence of routine medical examinations. In this case, the patient was asymptomatic and the tumor was detected incidentally.

The largest report on MESTK was conducted by Caliò et al[26], who described the clinicopathological features of MESTK in 53 patients. In their study, the MESTK generally appeared as a solitary, well-circumscribed, and solid or mixed mass. Morphologically, MESTK is typically a mixture of spindle cells and an epithelial component that lines a variable cystic architecture[20,27]. Recent studies have reported that hypocellular fibrous stroma and adipose tissue were more common in larger tumors, while cellular spindle cell stroma was more common in smaller tumors[26]. This finding is compatible with the present case, in which the tumor had the appearance of a large well-circumscribed mass with the stromal component consisting of paucicellular fibrosis cells and the epithelial component consisting of cysts or microcysts.

There have been some clinical and pathological studies of MESTK[5,9,10,20,23,24,28], but only a few radiological studies have been reported in adults[12,13]. MESTKs appear as well-defined, multi-septate cystic masses with a nodular component containing solid enhancing components after contrast enhancement. There have been few radiological reports of MESTK in adolescents. Lang et al[19] reported a 16-year-old male who had a large, well-defined mass protruding from the right kidney that was composed of solid parts on CT. This finding is similar to our case, but MRI was not described by Lang et al[19]. In the present case, MRI revealed a well-defined, expansive growth, and mixed mass that showed inconsistent delayed enhancement, which is similar to the MRI features found in women[12]. It has been shown that the degree of delayed enhancement may depend on the spindle cell components of these tumors, with minimal enhancement in paucicellular fibrosis and more intense enhancement in densely cellular areas[1,13,19]. The mass showed hypointensity on T2WI, suggesting that the mass contained a fibrotic component, which was supported by pathological findings.

Because of insufficient understanding, MESTK is easily misdiagnosed by both clinicians and radiologists. The differential diagnosis of MESTK includes cystic renal cell carcinoma (CRCC), angiomyolipoma with epithelial cyst subtype (AMLEC), and cystic nephroma (CN). CRCC mainly consists of cystic components with thickened, irregular walls and rough septa, and shows intense contrast enhancement during the corticomedullary phase, which progressively decreases during the nephrographic phase[29]. An AMLEC should be considered if the solid component of the lesion is hyperattenuating on a non-enhanced CT scan and T2-hypointense with homogeneous enhancement[30,31]. CN is also a cystic renal tumor, with thinner walls and no solid component. The cysts vary in size and have thin walls[21]. Nevertheless, recent studies suggest that MESTK and CN may represent different parts of the morphologic spectrum of the same tumor entity[24,32].

In conclusion, this report describes the MRI features of MESTK in a male adolescent. MRI provides superior delineation of the histological layers of the tumor compared with CT, and substantially lower radiation exposure can be achieved using MRI. Because MESTK is generally considered to be a benign tumor with a good prognosis, nephron sparing surgery may be appropriate to preserve kidney function. Although it occurs predominantly in menopausal woman, the possibility of MESTK should be considered in male adolescents with a cystic solid mass in the kidney.