The patient was a 48-year-old Japanese man with a smoking history (20 cigarettes/d, 28 years) and no symptoms. Multiple nodules existed in all lung lobes, predominantly in the right lower lobe. Some nodules seemed to be distributed randomly, and others were adjacent to bronchus. Most nodules were solid; some small ones were cystic. The largest nodule was 22 mm in diameter. Although metastatic lung tumors were suspected, thoracoscopic lung biopsy led to the diagnosis of PLCH. At 6 months after he quit smoking, all nodules had almost disappeared. We investigated the characteristics of nodules at diagnosis in detail. Of 349 nodules in total, 116 were in upper and 199 were in lower lobes. Ninety-six (27.5%) were cystic; the remaining 253 (72.5%) were non-cystic. The prevalence of cystic nodules was higher in upper lobes than in lower lobes (right upper 37.5% vs lower 18.2%, P = 0.0068; left upper 48.1% vs lower 24.4%, P = 0.0078). The average size (dia.) of cystic nodules was smaller than that of non-cystic nodules (5.03 mm vs 7.40 mm, respectively, P < 0.0001).

Core tip: The common computed tomography findings of pulmonary Langerhans cell histiocytosis (PLCH) are multiple cysts and micronodules predominantly in middle-to-upper lung lobes. We present herein a rare case of PLCH with non-cystic multiple large nodules. Of 349 nodules in total, 116 were in upper and 199 were in lower lobes. The prevalence of cystic nodules was higher in upper lobes than in lower lobes. The average size (dia.) of cystic nodules was smaller than that of non-cystic nodules. Knowledge of such characteristics of nodules may help the pulmonologists consider PLCH in differential diagnoses of multiple nodules.

Langerhans cell histiocytosis (LCH) is characterized by accumulations of large mononuclear cells named Langerhans cells that form granulomas in various organs such as bone, skin and lung[1-3]. LCH can be clinically classified into three groups: Single-system, low-risk multisystem, and multisystem with risk-organ involvement[4,5]. Pulmonary Langerhans cell histiocytosis (PLCH) is a diffuse lung disease whose clinical manifestations may involve a single organ or multisystem[4]. The common findings of PLCH on chest computed tomography (CT) scan are multiple cysts predominantly in upper lung zones and a micronodular pattern of the middle-upper lobes[4]. Non-cystic nodules and large nodules are rare in PLCH. Such characteristics of multiple nodules are common in metastatic cancers.

A medical examination revealed an abnormal shadow on the chest radiograph of a 48-year-old Japanese man with no symptoms.

He visited to our hospital immediately after an abnormal shadow was pointed out.

He had been diagnosed with primary aldosterone disease and hypertension and had continued with treatment with tablets of potassium chloride, spironolactone, telmisartan and amlodipine besilate. He had no other notable medical history.

He was a care assistant in a hospital and a current smoker (20 cigarettes/d for the past 28 years). He had no serious family history.

The physical examination revealed no remarkable abnormalities. Normal breath sounds and no adventitious sounds were auscultated.

Laboratory examinations revealed a low concentration of serum potassium (3.0 mmol/L). The C-reactive protein level was 0.58 mg/dL. There were no other abnormal findings, including circulating blood cell counts, blood biochemistry and routine urine tests.

The chest radiograph and CT showed multiple nodules in both lung fields (Figure 1). Although the nodules seemed to be distributed randomly, fewer nodules were adjacent to the pleura, and some were adjacent to bronchus (Figure 1B and C). Nodules existed from upper to lower lobes, dominantly in the right lower lobes (Figure 1B and C). Most of the nodules were non-cystic, and the small nodules were cystic (Figure 1C). The largest nodule was 22 mm in dia., in the right middle lobe (Figure 1D). Mediastinal lymph nodes were approx. 10 mm in size (not shown). The differential diagnosis included metastatic lung tumors, lymph proliferative disorder, granulomatous polyangiitis, and PLCH. 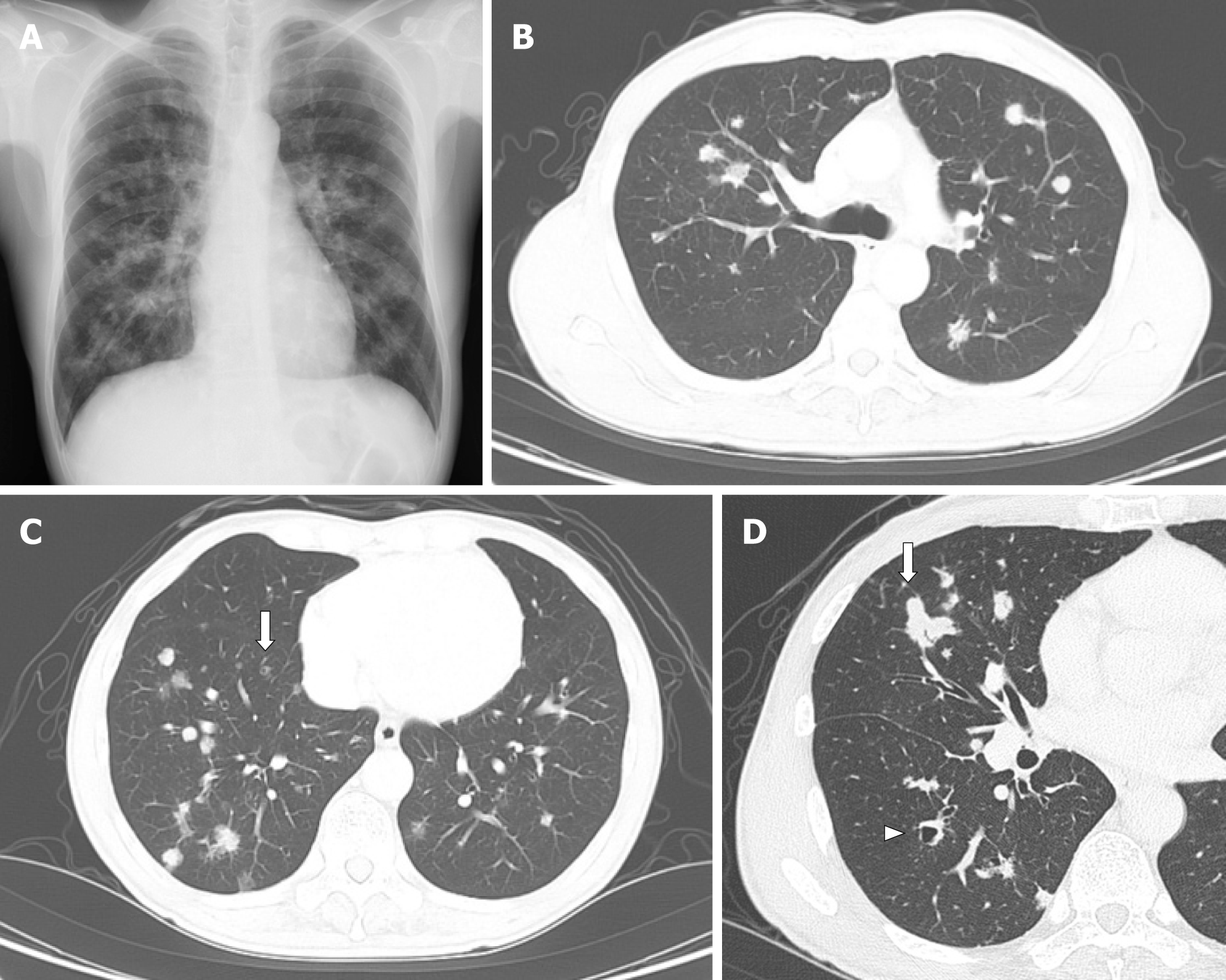 Transbronchial biopsy specimens showed non-specific features; only inflammatory cells (not shown). Several nodules in the right lower lobe were resected under thoracoscopic surgery, and tissue specimens showed abnormal cells with notched nuclei with the infiltration of many eosinophils (Figure 2A and B). Abnormal cells were positive for CD1a and S-100 (Figure 2C and D) and negative for CD68 and CD21 (not shown). Based on these findings, we made the diagnosis of PLCH. 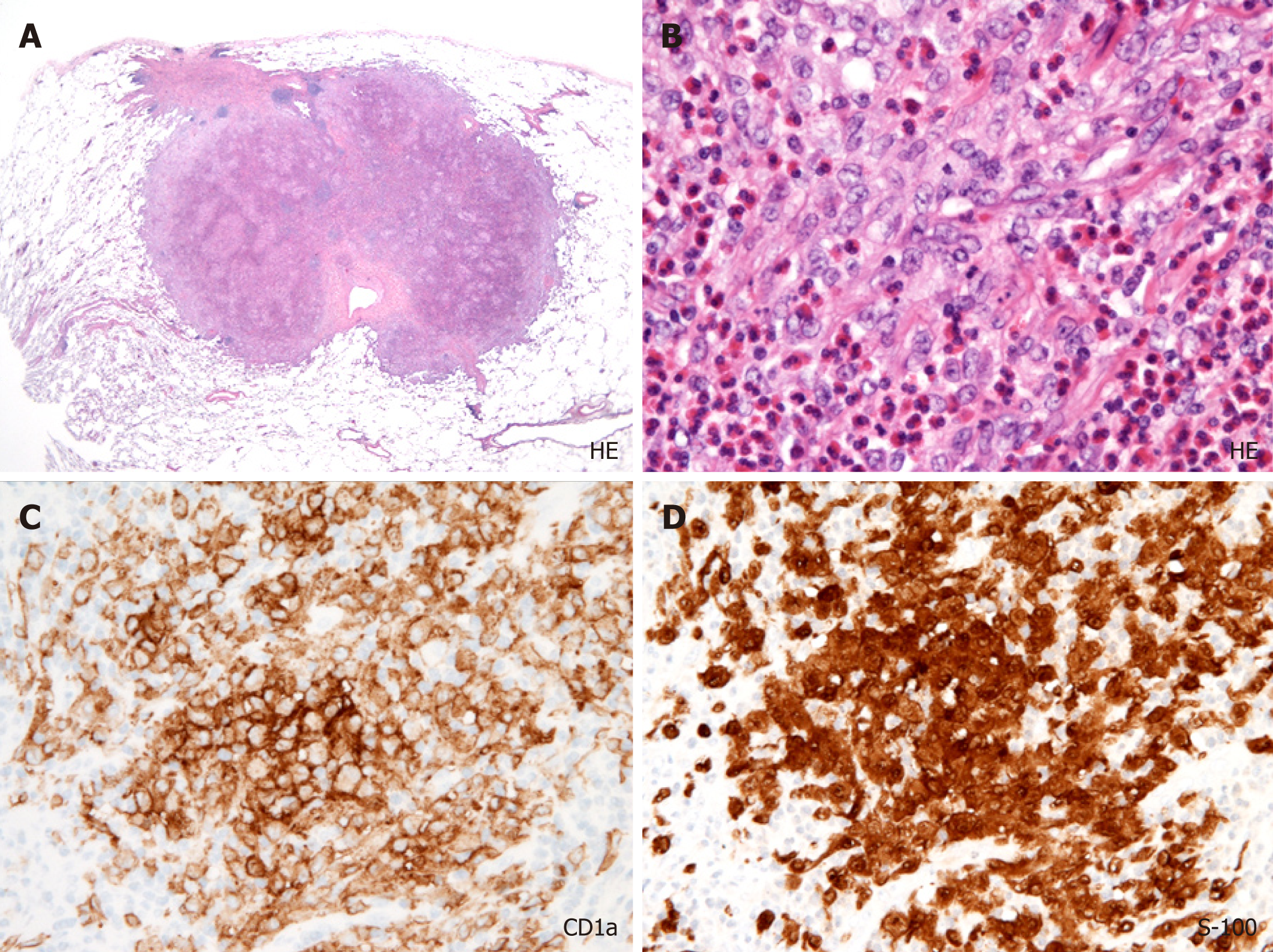 Figure 2 Histopathological findings obtained from a nodule in right lower field. A and B: Hematoxylin-eosin staining showing abnormal cells with notched nuclei with the infiltration of many eosinophils; C and D: Abnormal cells were positive for CD1a and S-100.
TREATMENT

The patient began to quit smoking after we encountered him. He received no a-dditional medical treatment.

He continued the smoking cessation, and 6 months later, all nodules had almost disappeared (Figure 3).

Figure 3 Radiological findings at 6 mo after the patient quit smoking. A: Chest X-ray; B: Computed tomography scan.
INVESTIGATION OF CHARACTERISTICS OF MULTIPLE NODULES 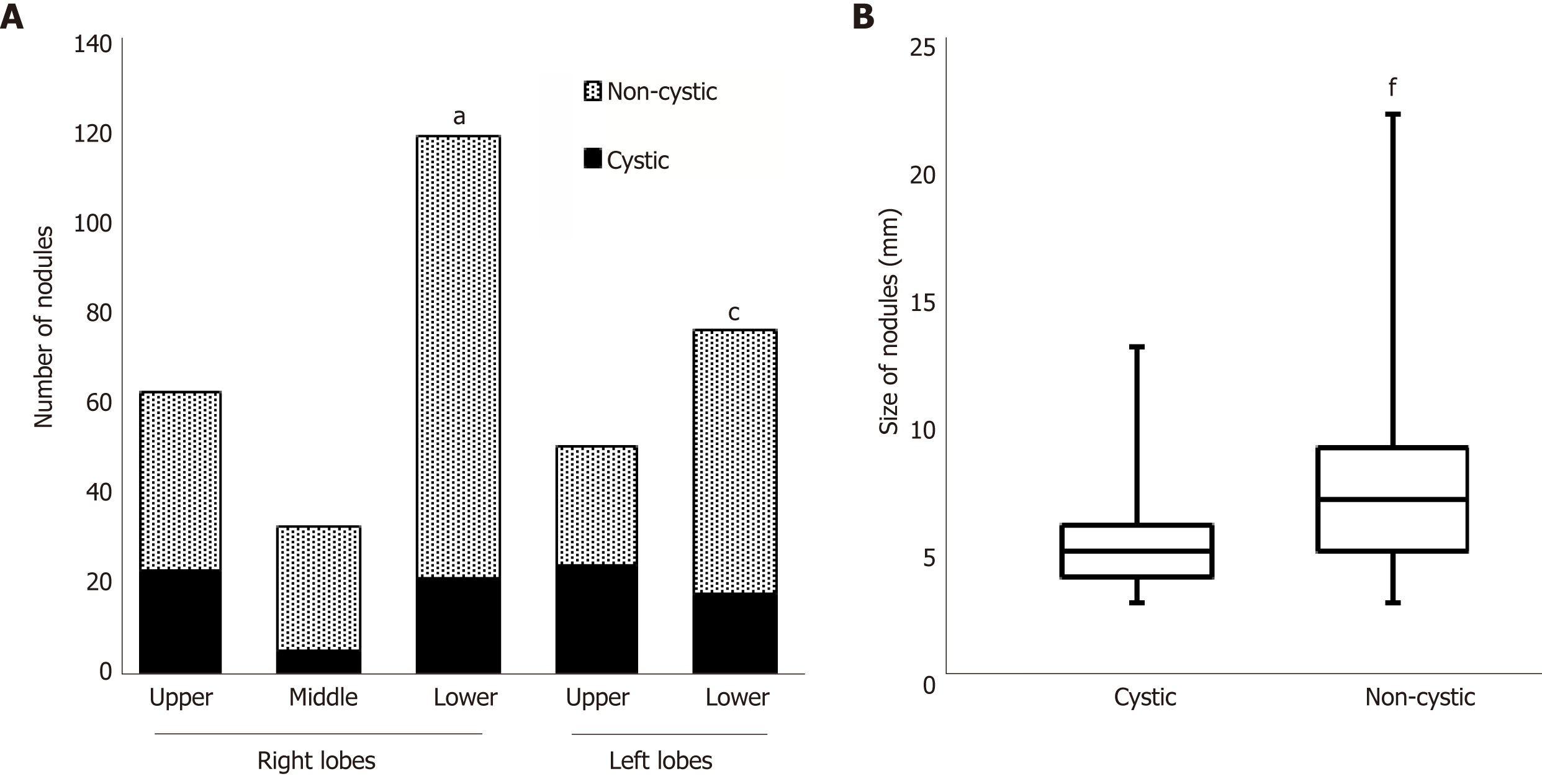 Our patient was diagnosed with PLCH and exhibited the following rare patterns on CT scans: (1) Multiple nodules dominantly in lower lobes; (2) Nodules > 20 mm in dia. Our investigation of the CT findings in detail revealed that (3) The prevalence of cystic nodules was higher in upper lobes than in lower lobes; and (4) The cystic nodules were smaller than the non-cystic nodules.

The two common CT findings of PLCH are multiple cysts and micronodules predominantly in middle-to-upper lung zones[4]. Either one or both of the findings were recognized in all 40 of the reported cases[4]. Other abnormal findings include patchy or cord shadows, pleural thickening, pleural effusion, and mediastinal lymph node enlargement[5]. PLCH cases with multiple nodules without cystic formation have also been reported[6-8]. However, the sizes of the nodules in those cases were usually < 10 mm[6-8]. Thus, the non-cystic large nodules observed our patient are rare in PLCH. In addition, a greater number of nodules were found in lower lobes than in upper lobes. Such characteristics are common in metastatic lung tumors (cancers) because they usually develop via a hematogenous route and the bloodstream is more abundant in lower lobes, although transbronchial dissemination in lung cancer was also occasionally reported[9].

Many studies have shown that a subset of LCH has genetic mutations including V-Raf murine sarcoma vial homolog B1 (BRAF)[3,10]. BRAF V600E was detected in approximately one-half of patients with LCH[10]. MAPKK1 mutations were detected in 6 of 13 (46%) BRAF-negative cases[3]. These findings suggest that LCH has some genetic monoclonality, which was considered to be a type of tumor.

Langerhans cells can develop in organs such as bone, skin, brain, liver and lung[1-3], suggesting that they can spread to the whole body hematogenously. It is possible that some of the nodules observed in the present case developed as a result of hema-togenous metastases. Consistent with this, the CT findings in several prior cases with multiple nodules showed a distribution pattern mimicking hematogenous pulmonary metastases[7,8]. We speculate that the distribution pattern as hematogenous lung metastases is consistent with PLCH as well as metastatic cancers.

There are several notable points for the differential diagnosis of PLCH from metastatic cancers in the present case. First, the distribution pattern of multiple nodules was not a completely hematogenous pattern, and some nodules were distributed around or adjacent to bronchi. It was reported that many small nodules were distributed in the centers of secondary lobules around small airways in PLCH[11]. It is quite unusual for a plurality of primary tumors to occur simultaneously. How-ever, the existence/non-existence of a transbronchial dissemination of Langerhans' cells remains unclear.

Third, another important finding concerning the differential diagnosis between PLCH and metastatic malignant tumors is the patient's symptoms. Patients with advanced cancer often present subjective symptoms such as anorexia, body weight loss, fever, and fatigue. Our patient had no symptoms. PLCH as well as pulmonary alveolar proteinosis[12] and sarcoidosis[13] is a disease by which a symptom may relatively lack even though the evidence of the extensive radiological findings.

We counted the number of nodules and evaluated the ratio of cystic to non-cystic nodules visually. However, the computer-aided automatic evaluation of radiological findings may bring the diagnosis that is more exact than a human evaluation. Recently, trials of deep learning-based diagnosis of pulmonary nodules have been reported[14,15]. The introduction of such artificial intelligence in the medical settings will be realized in the near future.

Multiple non-cystic nodules including large nodules (> 20 mm) can occur in PLCH. Knowledge of atypical findings in PLCH, taken together with other findings (e.g., cystic formation in small nodules dominantly in upper lobes and no symptom) may help pulmonologists consider PLCH in differential diagnoses.