Cystic fibrosis (CF) is rare in Asian populations relative to the Caucasian population. In this paper, we report the cystic fibrosis transmembrane conductance regulator (CFTR) variation in a family of Chinese CF patients, and systematically review the previous literature.

Here we report a 30-month-old Chinese girl who was diagnosed with CF based on her history and symptoms such as recurrent productive cough, wheezing with repeated infection of Pseudomonas aeruginosa, and parasinusitis. Chest computed tomography (CT) scanning revealed obvious exudative lesions and bilateral bronchiectasis. Liver CT scanning revealed a low-density lesion in the left lobe of the liver. A diagnosis of CF was made based upon CFTR gene tests. The CFTR gene was sequenced using the blood samples of her and her parents and showed a heterozygous novel missense mutation of c.753_754delAG in exon 7. In addition, a heterozygous c.1240 C>T mutation was found in exon 10 of the CFTR. The mutation c.753_754delAG was verified to have been inherited from her mother, and the c.1240 C>T mutation was from her father who was diagnosed with congenital absence of vas deferens.

A novel mutation of CFTR, c.753_754delAG, was found in a Chinese CF child. c.2909G>A is the most common mutation among Chinese CF patients.

Core tip: Cystic fibrosis (CF) is an autosomal recessive inherited disease caused by mutations in the CF transmembrane conduction regulator (CFTR) gene. CF is rare in Chinese. ΔF508 is the most common mutation, accounting for greater than two-thirds of CF alleles worldwide, though it is not a predominant mutation in Chinese CF patients. In this paper, we report a novel homozygous complex rearrangement involving CFTR exon 7 deletion (c.753_754delAG chr7-117176607-117176608) in a Chinese child with CF and describe the clinical feature. Moreover, we further review the literature regarding gene mutations in Chinese CF cases from the 1970s to 2017.

Cystic fibrosis (CF) is an autosomal recessive inherited disease caused by mutations in the CF transmembrane conduction regulator (CFTR) gene. CF is most common in the Caucasian population, with a prevalence of 1/2500-3500 among those with Northern European ancestry[1,2]. CF was once considered extremely rare among the Chinese population, and to date, only about 60 cases of CF have been diagnosed in China[3]. CFTR is responsible for regulating the flow of chloride ions across the epithelial membrane. Since CFTR was first identified as the pathogenic gene of CF in 1989, more than 2000 mutations have been found in CF patients, according to the Cystic Fibrosis Mutation Database (http://www.genet.sickkids.on.ca). ΔF508 is the most common mutation, accounting for greater than two-thirds of CF alleles worldwide, though it is not a predominant mutation in Chinese CF patients[4]. The most common gene mutation in Chinese children with CF is c.2909G-A[5]. With increased awareness of this disease and improvements in diagnostic techniques, we have found that CF is not as rare as once believed in the Chinese population. The novel variants c.699 C-A, c.579+1_579+2insACAT, c.1117-1G>C c.3140-454_c.3367+249del931ins13, and p.R1048_G1123del have been reported in CF patients from China in recent years[6-8]. Interestingly, the gene mutation spectrum of CFTR in Chinese patients with CF is significantly different from that in Caucasian patients. Therefore, it is necessary to establish the Chinese CFTR gene mutation database, which will facilitate the genetic diagnosis of CF patients in China. In the present study, we identified a novel homozygous complex rearrangement involving CFTR exon 7 deletion (c.753_754delAG chr7-117176607-117176608) using multiplex ligation-dependent probe amplification analysis in a Chinese child with CF. We further review the literature regarding Chinese CF patients from the 1970s to 2017. The clinical data of all identified CF patients are summarized.

A girl aged 2 years and 10 months was admitted to Children’s Hospital of Soochow University in May 2018 due to recurrent productive cough and wheezing lasting for 1 month.

She had experienced recurrent pneumonia (2-3 times every year) beginning 4 mo after birth, with repeated infection by Pseudomonas aeruginosa and parasinusitis, but without a history of chronic diarrhea or pancreatic involvement.

The child was conceived through in vitro fertilization. Her father had been diagnosed with congenital absence of vas deferens, and her mother was healthy.

She weighed 11 kg, her height was 89 cm, her body mass index was 13.9, and she presented with shortness of breath and dyspnea. Crackles and wheezing rales were present in bilateral lungs. The heart and abdomen were normal. No clubbed digits were found. 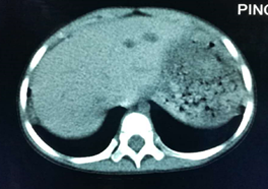 Two heterozygous mutations were found in the CF patient by Sanger sequencing analysis. A heterozygous novel missense mutation of c.753_754delAG chr7-117176607-117176608 was identified in exon 7 (Figure 3), which was inherited from her mother based on its identification in the mother’s sample as well (Figure 3). This novel mutation has not yet been recorded in the CFTR mutation database (http://www.genet.sickkids.on.ca). In addition, a heterozygous c.1240 C>T mutation in exon 10 was observed in CFTR of the CF patient (Figure 4), which was inherited from her father and had already been included in the CFTR mutation database. 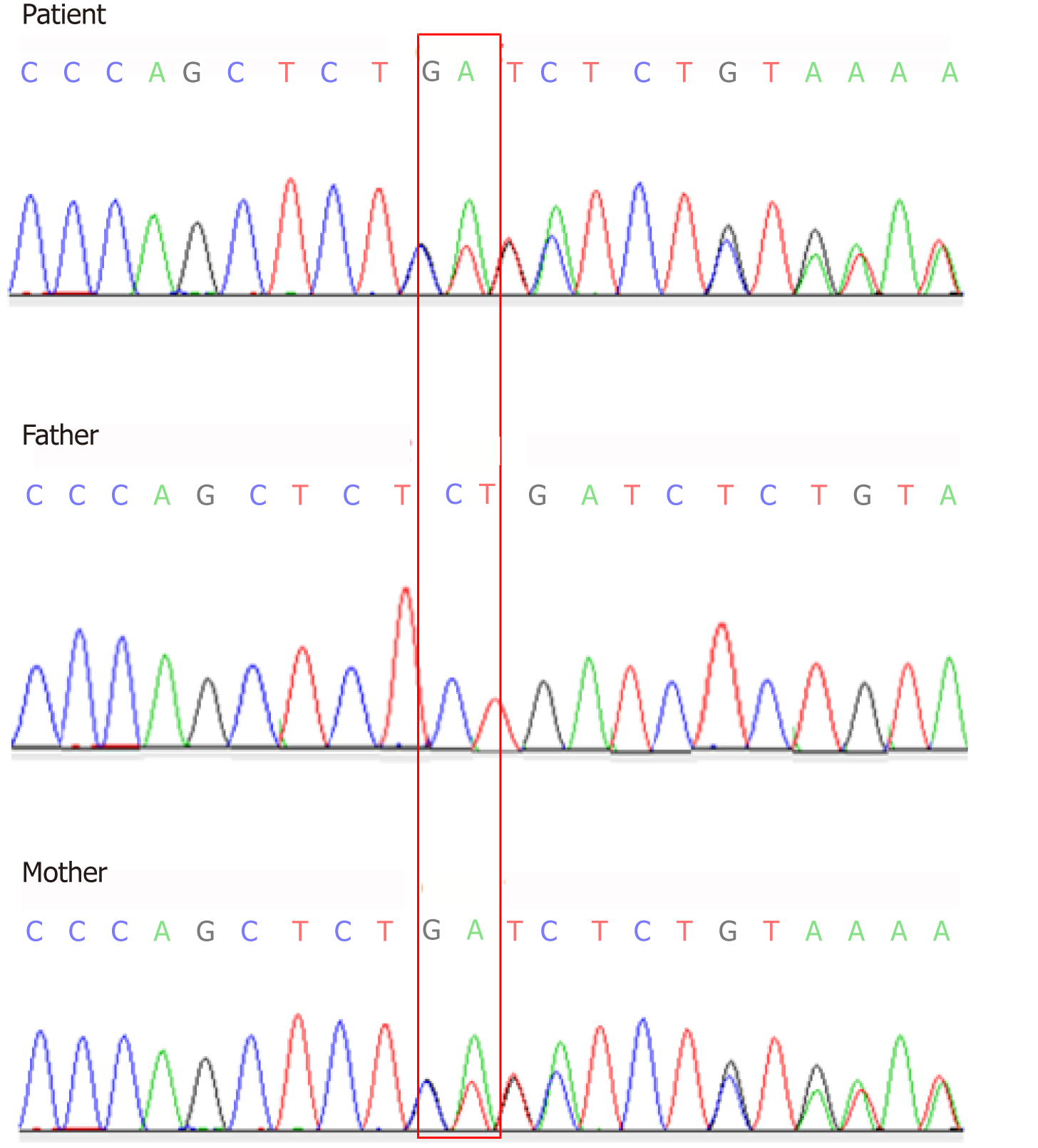 Figure 4 Genomic sequence of exon 10 of CFTR. CFTR genomic sequencing results of exon 10 revealed a heterozygous mutation of c.1240C>T chr7-117188725 p.Q414* in the cystic fibrosis patient and her father. Exon 10 of her mother was normal.
FINAL DIAGNOSIS

Her symptoms improved after antibiotic treatment with ceftazidime for 3 wk, expectorant, and nutritional support treatment including fat-soluble vitamins and powdered milk with high calorie.

After being discharged from our hospital, the children were followed monthly in the outpatient clinic. We gave low dose azithromycin anti-inflammatory treatment to eradicate P. aeruginosa infection. We did regular examinations of respiratory rate, oxygen saturation, and high-resolution CT of the chest to evaluate the pulmonary disease regression/progression. We introduced regular atomized bronchodilators such as terbutaline and oral secretion expellant including acetylcysteine to help remove respiratory secretions. She had one time of pulmonary infection. The general situation remained well up to date. She weighed 13 kg, her height was 95 cm, and her body mass index was 14.4.

CF is characterized by the abnormal transport of ions and fluid across epithelial cell membranes, resulting from mutations on both alleles in the gene encoding the CFTR[9,10]. CFTR mutations can cause secretions to obstruct the airway, pancreatic tract, and biliary tract and lead to abnormal secretion by the sweat glands. The most important organ to be invaded in CF is the lung, and lung disease is the most lethal factor (85%)[11]. The pancreas is also an important affected organ in CF. Disorders caused by CF include nutritional disorders (fat, protein malabsorption, and fatty diarrhea) and growth retardation. Low body weight caused by pancreatic insufficiency is negatively correlated with lung function and survival rate, and thus, an important factor for poor prognosis[12]. Malnutrition and gastrointestinal symptoms are relatively mild and atypical in Chinese CF patients. Therefore, it is easy for CF diagnosis to be missed or delayed.

For patients with one or more clinical characteristics, such as chronic sinopulmo-nary disease, gastrointestinal and nutritional abnormalities, genital abnormalities in males resulting in obstructive azoospermia, and/or a family history of CF, the measurement of sweat electrolyte concentrations has been the mainstay of CF diagnosis since the standardized procedure was introduced[13]. In the CF case reported here, the patient had chronic sinopulmonary disease, and her father had a CF mutation with obstructive azoospermia. These patients should undergo repeat sweat chloride testing and further evaluation, including detailed clinical assessment and more extensive CFTR gene mutation analysis. CF in Chinese patients is difficult to diagnose, due to insufficient understanding and because sweat examination as well as genetic testing cannot be carried out in most hospitals. It is necessary to educate Chinese pediatricians concerning the clinical manifestations and diagnostic criteria for CF and to promote the implementation of the sweat chloride test.

Several studies have demonstrated that p.F508del is the most common mutation in Caucasian CF patients, accounting for approximately 70% of cases[4,5]. The p. F508del mutation is a type II mutation. We review 82 different mutations among 69 Chinese CF patients (40 females and 29 males) reported from the 1970s to 2017. Among them, 53 were from mainland China, 9 from Taiwan, and 4 from Hongkong, with the remaining patients being of Chinese and Vietnamese descent, Chinese and Portuguese descent[7,8,15-40] (Table 1). The age at diagnosis ranged from 0.17 months to 23 years.

Among the Chinese CF patients, the c.2909 G>A variant was the most common mutation type (11%), followed by 1898+5G>T (7.3%), c.293A>G (6.1%), and 2215insG+G2816A and c.263T>G (both 4.9%). Nevertheless, no p.F508del mutation was found in the Chinese patients (Table 1). In addition, with the exceptions of c.3909 C>G, R553X, and c.1000 C>T, none of the CFTR mutations in the Chinese patients were present in the common Caucasian CFTR mutation-screening panels, indicating that the mutations identified in Chinese CF patients are obviously different from the common gene mutations in Caucasian CF patients. Further, pulmonary lesions were more prominent in Chinese CF patients with or without pancreatic insufficiency[6-8,26,27]. Therefore, it is necessary to establish a Chinese gene mutation database to facilitate genetic diagnosis of CF in China to clarify the relationship between genotype and clinical phenotype.

In the case reported herein, the c.1240C>T mutation resulted in the alteration of amino acid p.Q414* (glutamine > termination). This mutation type has been reported already as a pathogenic mutation in the HGMD pro database[14]. c.753_754A del A.G is a novel mutation (deletion mutation) that results in amino acid changes P.R251Sfs * 6 (frame-shifting mutation - 6 termination). According to the ACMG guidelines, the mutation site c.753_754delAG could be classified as a pathogenic mutation[39]. Both mutations could result in the early termination of CFTR protein translation, which might have a great impact on protein function. The double heterozygous mutation came from the patient’s parents separately. As a compound heterozygous mutation, it is consistent with autosomal recessive inheritance and is a theoretically possible cause of disease. This case expands the mutation spectrum of CFTR in patients of Chinese origin. Several studies have shown that only pancreatic function correlates well with CFTR genotypes[40,41]. According to the pancreatic status of patients, CF mutations can be subdivided into two groups: mild and severe mutations[40]. Patients with pancreatic insufficiency are homozygous or compound heterozygous with two “severe” mutations, whereas patients with pancreatic sufficiency have at least one “mild” allele. As it is not clear from the case if the patient had pancreatic sufficiency or insufficiency, we cannot deduce whether the two mutations were severe mutations or not. Elevated serum lipase, which has not been mentioned before, is not a sign of severe mutation, more of possible pancreatitis which is more commonly seen in heterozygous CF carriers or in those with milder mutations and pancreatic sufficiency.

In conclusion, a novel compound heterozygous c.753_754delAG mutation was found in exon 7 of CFTR in the case reported herein. The common CFTR mutation spectrum in Chinese CF patients is quite different from that in Caucasian patients. Therefore, the Chinese common CFTR mutation spectrum provides valuable data for CF diagnosis in Chinese patients and the development of a commercial Chinese CFTR genetic screening kit. The relevant Chinese gene mutation database is urgently needed.

The authors are grateful to all technicians of the Diagnostic Microbiology Laboratory, the Children’s Hospital of Soochow University, for technical contributions and Beijing Precision Gene Technology Company (Beijing, China).