Solitary rectal ulcer syndrome (SRUS) is a chronic, benign, uncommon and under-diagnosed disease. It is estimated that the annual incidence of SRUS is one of 100000 people, mainly affecting men in the third decade of life and women in the fourth decade[1]. Its symptomological profile consists of intestinal symptoms, primarily constipation, feeling of incomplete defecation, bloody or purulent stools, discomfort with falling anus, and rectal ulcers.

The diagnosis of SRUS is largely based on findings in rectoscopy and analysis of tissue biopsy. The treatment of SRUS includes local medication, improvement of bowel defecation habits, biofeedback, and surgical operation[2]. We report herein the case of a 50-year-old woman with SRUS and describe its appearance on rectoscopy and in analysis of the gross specimen following Chinese medicine therapy. The purpose of publishing this case is to report and discuss the effects of herbal therapy on SRUS.

A 50-year-old woman presented to our hospital with a 2-year history of intermittent dull pain in her left lower abdomen, a 40-d history of rectal swelling and discomfort, and a 20-d history of mucinous and bloody, loose stools.

The patient was sent to our Chinese medicine hospital on September 5, 2018. She reported having had developed intermittent left lower abdominal dull pain 2 years prior, after suffering from cold and eating irritating food. She reported no obvious cause of the rectal swelling discomfort that had developed 2 mo previously nor of the mucinous bloody, loose stools (occurring three or four times a day) 40 d prior. She also reported insomnia, and we observed her tongue to be red in color with white and thick fur, and a thin pulse.

The patient had undergone hemorrhoid surgery in 2009 and polypectomy of the cervical canal in 2011. Her father had died of a femoral fracture in the neck; otherwise, there was no medical family history. 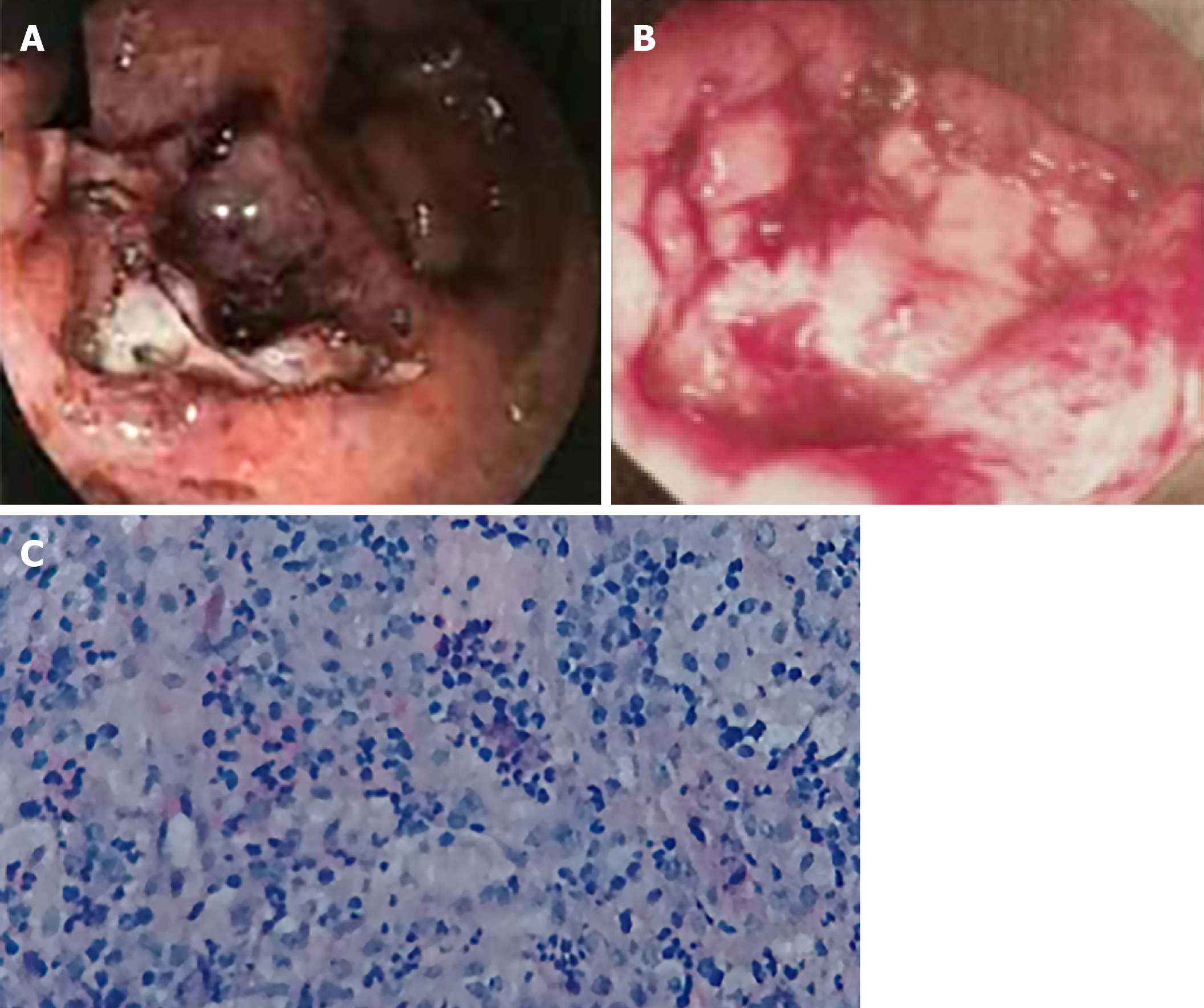 The patient was diagnosed with SRUS, based on the findings from endoscopy of the rectum and colon (Figure 1A, B) and histology of the biopsy (Figure 1C). Her condition was deemed to be serious. Diagnosis of Traditional Chinese Medicine (TCM) was diarrhea (liver stagnation and spleen deficiency), according to the patient’s main clinical symptoms.

On September 30, 2018, the patient was examined in the Third Affiliated Hospital of Beijing University. Rectoscopy showed an irregular shaped ulcer, 3 cm from the anal verge, about 1.0 cm × 1.2 cm in size, less white fur on the surface, flat bottom, concentrated folds around the rectum, and fusion, thickening and interruption near the ulcer; the biopsy specimen was tough, with no stenosis (Figure 2A). The pathological report noted chronic rectal ulcer mucosal inflammation, with focal lymphocyte aggregation (Figure 2B). The results suggested that the ulcer surface tended to be scarred, having improved and healed without prescribed Western medicine. The improvement of rectal symptoms in this patient should be attributed to the role of the 21 herbs administered. 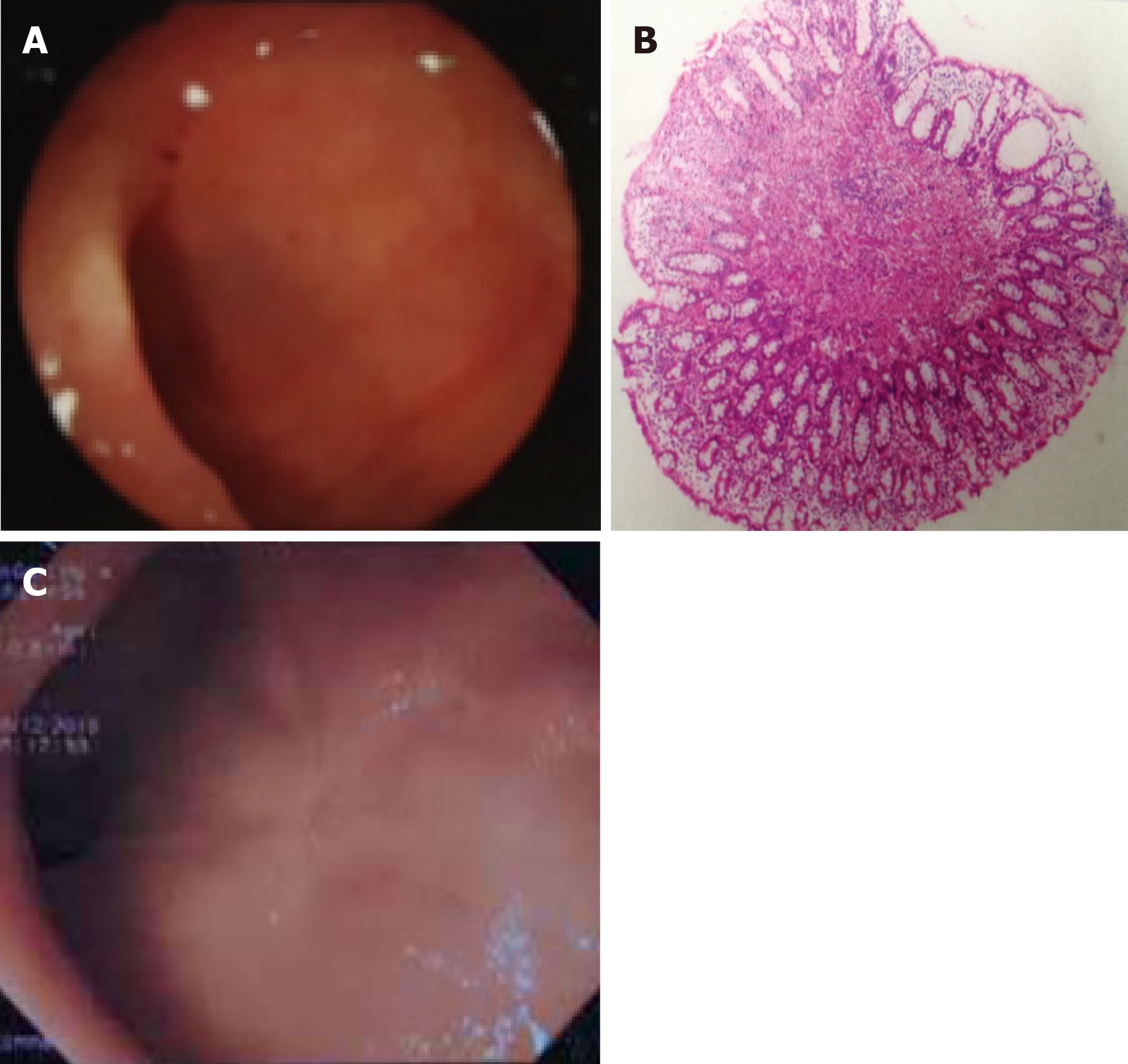 The therapeutic regimens for SRUS include conservative treatment, medical therapy, biofeedback therapy, and surgery[2]. The choice of treatment depends upon the severity of symptoms and the presence of rectal prolapse. In our case, TCM may have played a role in the successful treatment of SRUS and highlights the potential of such as a supplementary and alternative therapy. Some studies have suggested that fruits, vegetables and grains have protective effects against adenoma and colorectal cancer. Probiotics may also have preventive effects on colorectal cancer but the actual beneficial effects remain to be definitively evidenced[7,8]. Conservative treatment (high-fiber diet, laxatives, change in defecatory habits, and biofeedback treatment) were shown to induce a symptomatic improvement in 71/91 patients (63.6%) and healing of mucosal lesion in 17/51 patients (33.3%)[9]. According to those reports, SRUS may be prevented and improved by adjusting dietary structures and probiotic levels.

TXYF is recorded in the Dan Xi Xin Fa. Form the viewpoint of TCM, it is used to relieve the pain and diarrhea caused by the incompatibility of the liver and spleen. ESW is recorded in the Pu Ji Ben Shi Fang. Differently, it is used for diarrhea due to deficiency of the spleen. At the patient’s first hospital visit, she mainly complained of pain in her left abdomen, diarrhea, mucinous defecation, and abnormal defecation. Based on TCM theory, her clinical symptoms were categorized as diarrhea. The patient had mild anxiety, depression and insomnia during her illness. DZXW can maintain the ability of learning and memory in depression, and the mechanism involves the promotion of neural stem cell proliferation in hippocampal formation[10].

TXYF is a commonly used Chinese herbal prescription for diarrhea, suggested to be effective in treating diarrhea-predominant irritable bowel syndrome (IBS-D)[11]. 5-hydroxytryptamine (5-HT) is a neurotransmitter that is widely distributed throughout the central nervous system and gastrointestinal tract, which may contribute to the symptoms of IBS. Li et al[12] demonstrated that TXYF treatment diminishes colonic 5-HT levels and alleviates the symptoms of IBS-D by favorably affecting microbiota levels in gut flora communities. Data from a study by Yin et al[13] suggested that the activity of the enteric nervous system and the regulation of 5-HT and substance P activities can be modulated by TXYF. Corticotropin-releasing hormone-receptor 2 (known as CRH-R2) is known to activate the intestinal mucosal anti-inflammatory response by regulating migration, proliferation and apoptosis of intestinal epithelial cells, as has been shown in colitis-induced mice[14], and to play an important anti-inflammatory role. Gong et al[14] demonstrated that TXYF can facilitate mucosal repair in colitis mice by regulating the CRH-R2. TXYF was also shown to improve the symptoms of postinfectious IBS by alleviating behavioral hyperalgesia and exerting antidiarrheal effects, the underlying mechanism of which involves TXYF inhibition of mucosal mast cells’ activation, down-regulation of tryptase and c-Fos expression, and reduction of serum TNF-α and histamine levels[15]. Therefore, it is suspected that TXYF may relieve the symptoms of SRUS by decreasing the defecation frequency and promoting mucosal repair.

AM is the most important herb in TXYF. Studies by Song et al[16] reveal that treatment with AM significantly stimulates the migration of intestinal epithelial cells (commonly known as IECs) through the polyamine-Kv1 channel signaling pathway, which can promote healing of intestinal injury. Findings from another study suggested that AM significantly stimulates the migration of IEC-6 cells through a polyamine-dependent mechanism, which could accelerate the healing of intestinal injury[17]. These results provide evidence for the effect of AM in treating intestinal diseases that are characterized by injury and ineffective repair of the intestinal mucosa in clinical practice.

Dandelion polysaccharide has a good effect on clearing heat, resolving toxin presence, dissipating binding, and dispersing swelling. It plays an important role in the treatment of ulcerative colitis by decreasing the level of interleukin (IL)-6, which increases chronic intestinal inflammation[20,21]. Dandelion polysaccharide has also been shown to effectively regulate the expression of the IL-6 receptors (particularly the α form) and the glycoprotein 130 (commonly known as gp130) protein in the IL-6/transcriptional activator 3 (commonly known as STAT3) pathway, and then down-regulating the expressions of STAT3 and IL-6 mRNAs in intestinal tissue (of rats), thereby alleviating the colon inflammation state and protecting and repairing the mucosal tissue[21].

Many neurotransmitters, including dopamine, glutamate, norepinephrine, nitric oxide, and 5-HT and its 5-HT3 and 5-HT4 receptors are expressed in the brain and intestine. Disorder of the bidirectional communication between the intestinal tract and intestinal nervous system and brain (brain-intestinal axis) is regulated by various psychosocial and environmental factors (i.e., infection and inflammation)[22]. Therefore, the addition of spirit-regulating herbs may be useful for the recovery of gastrointestinal function.

Clinical application of TCM, DZXW, spine date seed and Silktree Albizia bark has remarkable effect on quieting the spirit and resolving depression. DZXW has been shown to effectively ameliorate learning-memory impairment in aging rats, improving their learning-memory capacity, and its mechanism may be related to a promotion of the function of the cerebral monoamine nervous system in brain tissue and a reduction in the level of lipid peroxidation in brain tissue[23]. Finally, the aqueous extract of Albizia adianthifolia leaves shows anxiolytic and antidepressant effects, and may confer neuroprotection due to alleviation of oxidative stress in the (rat) amygdala induced by 6-hydroxydopamine injection[24].

The case described herein demonstrates that Chinese formulas, specifically modified TXYF, can be effective in relieving the symptoms of SRUS. This finding provides new insight into the treatment of SRUS and a basis for further studies to determine the underlying mechanism.