Roux-en-Y gastric bypass (RYGB) is the most commonly performed surgical procedure used to treat obesity worldwide. Despite satisfactory results in terms of weight loss, over time many patients experience weight regain. There are many factors that contribute to weight regain after RYGB, including the diameter of the gastric-jejunal anastomosis (GJA). One of the most commonly performed endoscopic procedures for weight regain after RYGB is argon plasma coagulation (APC). We report a case of hematemesis after outlet revision with APC. We highlight several treatment modalities that can be used to treat this complication.

A 45-year-old female with a history of weight regain after RYGB was referred for possible endoscopic treatment for weight regain. On endoscopic evaluation, the diameter of the GJA was 22 mm. Due to the dilated GJA, treatment with APC was performed. Several months later she reported a return of poor satiety and an increased appetite. A repeat endoscopy was then performed. The GJA was approximately 15 mm and was incompetent. APC was performed. One day post procedure she had four episodes of hematemesis. An endoscopy was performed and a large ulcer with a visible arterial vessel was visualized at the GJA. Coagulation was attempted using a Coagrasper and after initial contact with the vessel, the vessel started oozing. Due to fibrosis and the depth of ulceration in the area, clips and repeat APC could not be used. Therefore, an attempt to inject epinephrine injection was made. However, persistent oozing was noted. As a result, hemostatic powder was applied to the region of the bleeding vessel. Subsequently, no more bleeding was observed. On follow-up, the patient remained hemodynamically stable and a second look endoscopy was not performed. The patient was discharged three days later.

APC revision of the GJA is known to be a relatively safe and effective strategy to manage weight regain post RYGB. Anastomotic site bleeding is an infrequent and potentially life-threatening complication associated with this therapy. Endoscopic management is the first line therapy used to achieve hemostasis in these cases.

Core tip: We report a case of a patient with weight regain after Roux-en-Y gastric bypass presenting with gastrointestinal bleeding after recent outlet revision with argon plasma coagulation. We highlight several treatment modalities, including mechanical, thermal, and topical endoscopic therapies that can be used to treat this complication.

Roux-en-Y gastric bypass (RYGB) is one of the most commonly performed surgical procedure used to treat obesity worldwide[1]. Despite satisfactory results in terms of weight loss, over time many patients experience weight regain[2]. There are many factors that contribute to weight regain after RYGB, including lack of exercise, medical conditions, psychiatric problems, overeating, medicines known to cause weight gain, poor family support, and dilation of the gastric-jejunal anastomosis (GJA)[2,3].

Among these factors, the diameter of the GJA plays an important role in controlling weight regain post RYGB. Though effective, traditional surgical revision is used in less than 15% of patients because it is associated with relatively high complication rates (between 15% to 50%), longer operative time, increased intraoperative blood loss, and a non-negligible mortality rate (of more than twice that of the original procedure)[4-8].

As a result, endoscopic revision of a dilated GJA was first reported in 2004 and has gained wide acceptance since that time[9]. One of the most commonly performed endoscopic procedures post RYGB is argon plasma coagulation (APC). It is safe, efficient, and easy to learn, and is associated with a low complication rate[10,11]. One associated complication is post APC bleeding.

We report a case of a patient with RYGB presenting with gastrointestinal bleeding after recent outlet revision with APC for weight loss. We highlight several treatment modalities that can be used to treat this complication.

We present a case of a 45-year-old female with obesity and a history of type 2 diabetes mellitus, gastroesophageal reflux disease, hypercholesterolemia, hypertension, and nonalcoholic fatty liver disease who underwent RYGB in 2005.

On endoscopic evaluation, the gastric pouch extended from 38 to 42 cm and no fistula or ulcers were seen. The diameter of the GJA was 22 mm (Figure 1). Due to the dilated GJA, treatment with APC was performed. Under CO2 insufflation, tissue at the rim of the GJA was treated with forced APC at 0.8 L/min and 70 W in a 1.0 cm concentric ring (Figure 2). There was no direct contact with the mucosa. The patient was treated with monitored anesthesia care. The procedure was performed without any adverse events. 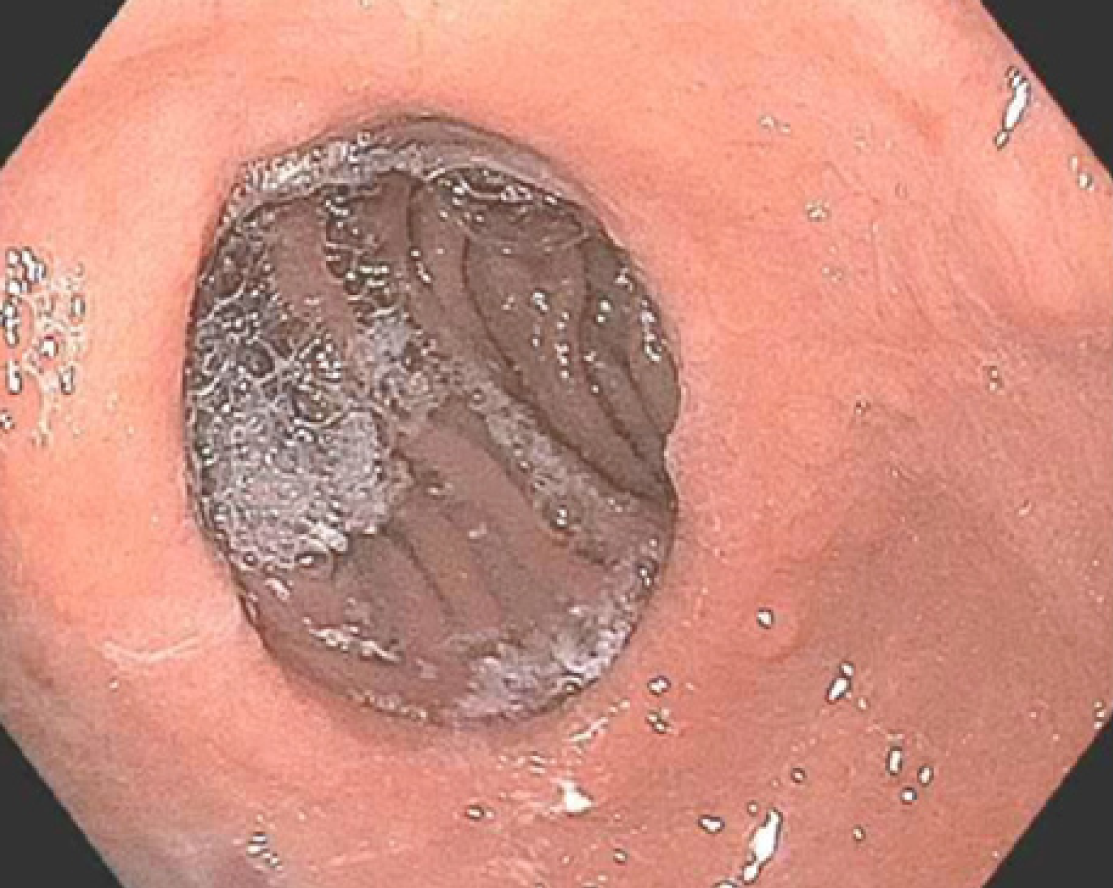 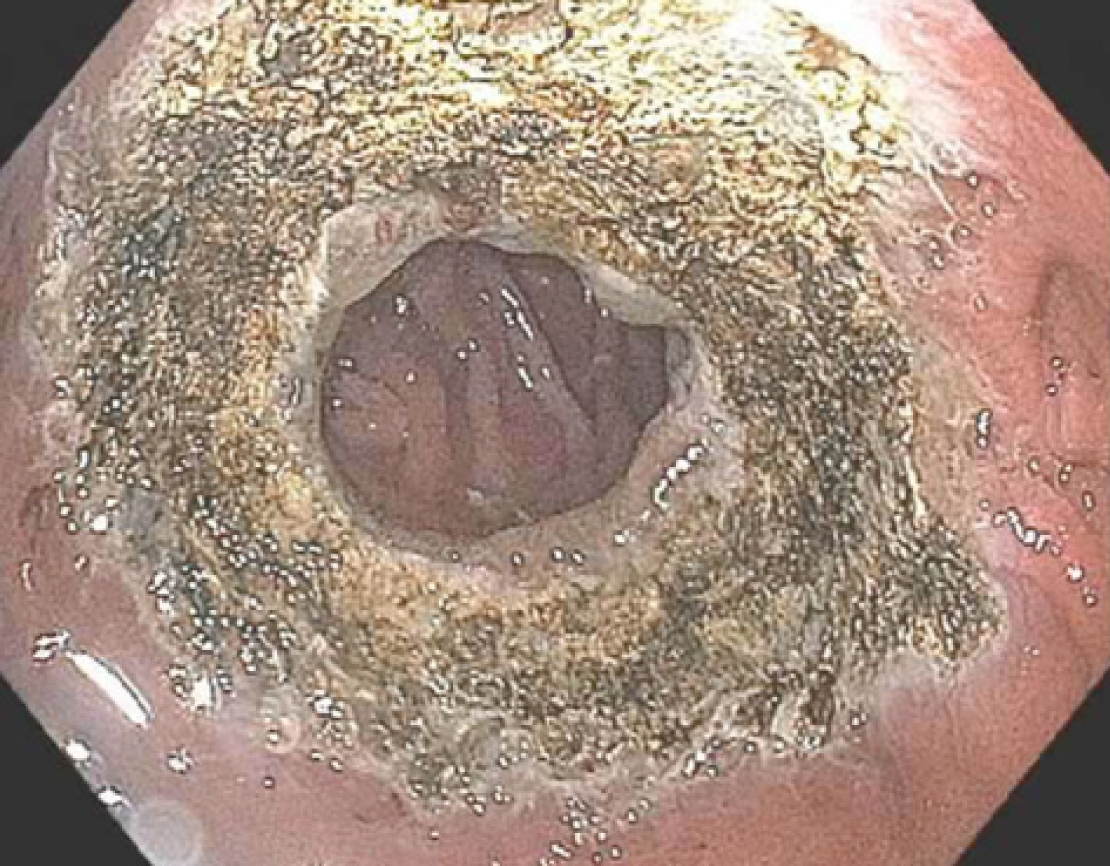 Following her first APC, our patient stopped gaining weight, however, she had inadequate weight loss (106 kg, BMI: 36.7 kg/m2). Several months later, she reported a return of poor satiety and an increased appetite. A repeat endoscopy was then performed. At that time, the pouch extended from 38 to 41 cm and the GJA was approximately 15 mm in diameter and was incompetent, without ulceration. APC was performed. The procedure occurred without any adverse events, including bleeding.

One day post procedure she had four episodes of hematemesis with visible clots. She also had one large bowel movement with maroon and bright red blood per rectum. Her hemoglobulin decreased from 12.8 g/dL to 10.5 g/dL but she was hemodynamically stable. A type and cross was obtained and two large bore IV needles were inserted. A repeat upper endoscopy was performed. The esophagus and the pouch mucosa appeared normal, with no signs of active bleeding. There was a large ulcer with a visible arterial vessel that was visualized and located at the GJA (Figure 3). Coagulation was attempted using a CoagrasperTM (Olympus, Tokio, Japan) and after initial contact with the vessel, the vessel started oozing (Figure 4). Subsequently, ipolar coaptive coagulation was attempted, without success. Repeat APC was not performed due to the depth of the ulceration and concern that this could potentially increase the risk of a delayed perforation. Therefore, injection therapy using a solution comprised of 2 mL of a 1:10000 solution of epinephrine was attempted surrounding the protruding vessel. However, persistent oozing was noted, and significant blood clots were observed around the anastomotic site limiting endoscopic visualization of the vessel. 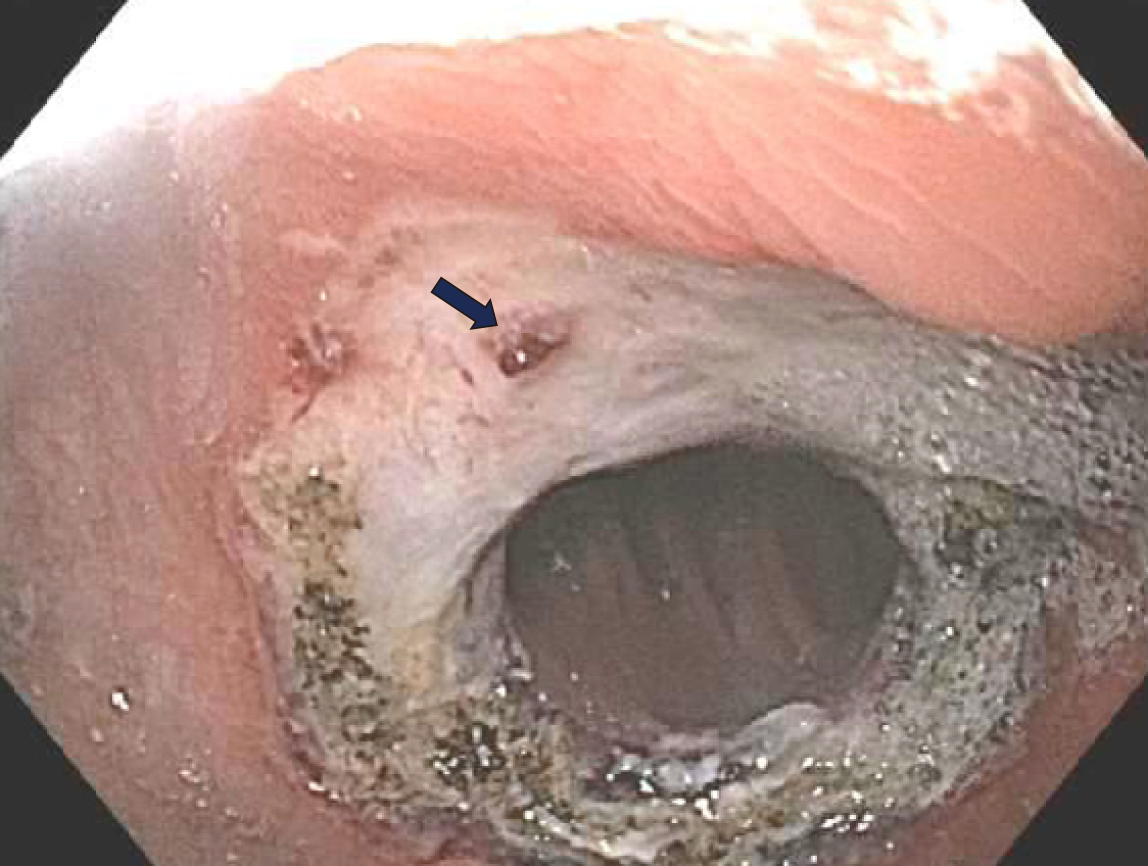 Figure 3 Circumferential ulceration with one protruding vessel at the anastomotic site one day after argon plasma coagulation. 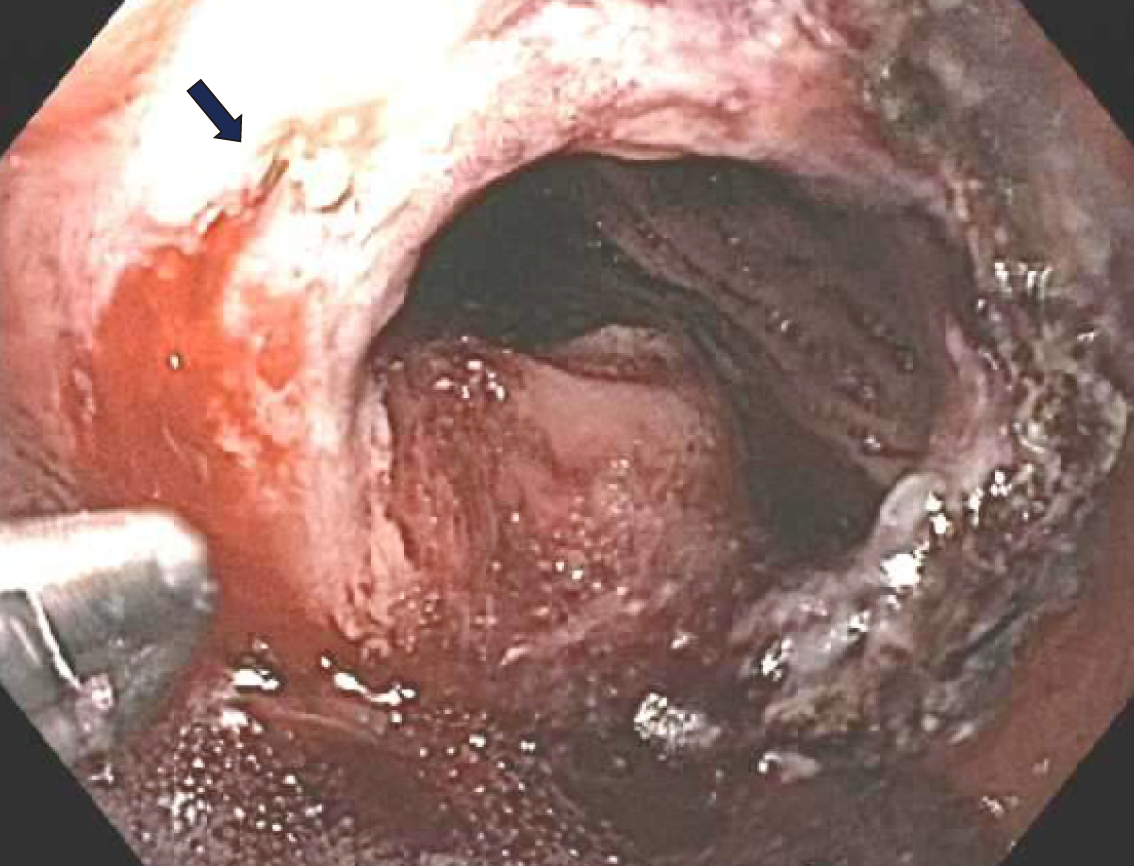 Figure 4 Spurting vessel was noted after thermal therapy with a Coagrasper.

Additionally, due to fibrosis in the area and to the poor visualization caused by the blood clots within the pouch, clips could not be applied. As a result, after cleaning some the blood clots, hemostatic powder [Hemospray® (Cook Medical, Winston-Salem, NC, United States)] was applied to the region of the bleeding vessel. Subsequently, there was no more bleeding from the visible vessel (Figure 5). Vital signs remained stable throughout the procedure and no blood transfusions were necessary. The patient remained on an IV proton pump inhibitor (PPI) and she was made nil per os (NPO). One day post procedure an oral PPI was initiated, and she remained on a liquid diet for 2 d and then was advanced to a regular diet. The patient remained hemodynamically stable and a second look endoscopy was not performed. She was discharged three days later. 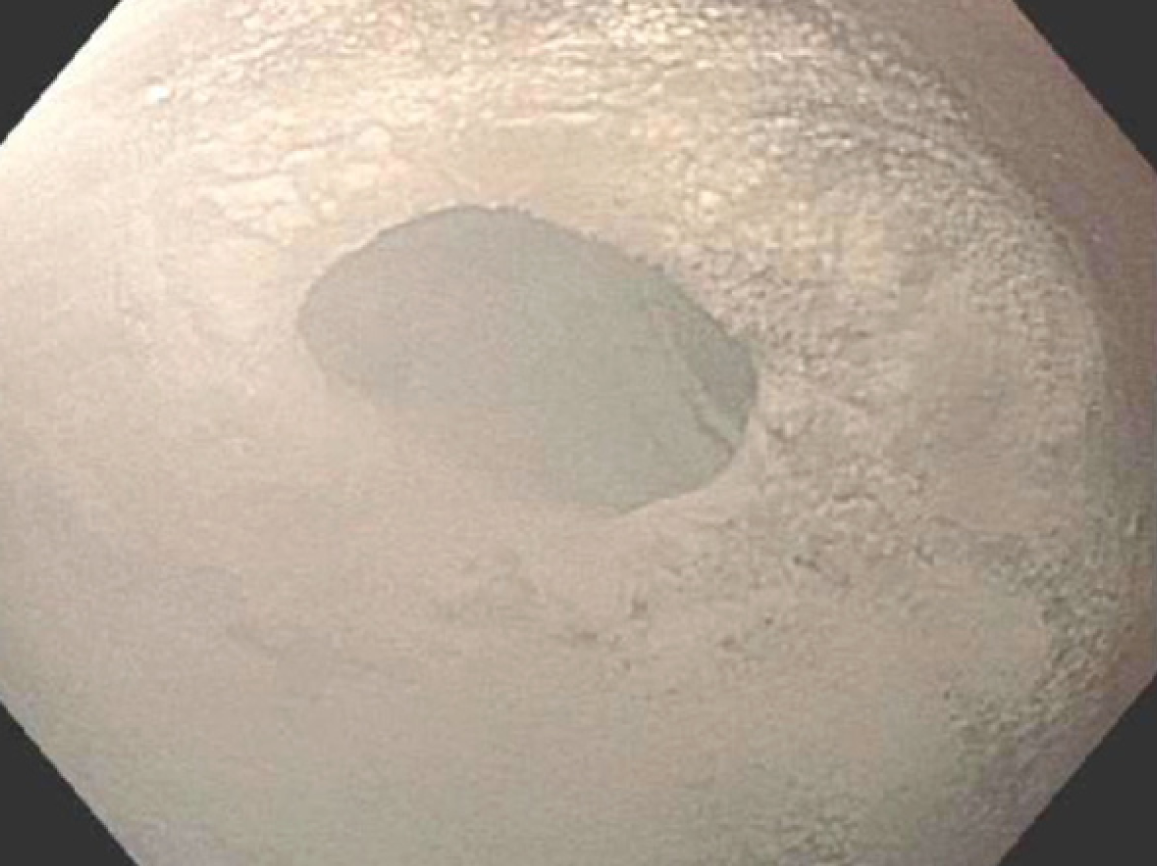 Over the last decade, dilation of the GJA has been recognized as an important cause of weight regain after RYGB. However, re-operative surgery to reduce the GJA diameter or the pouch size is technically challenging and is associated with a relatively high complication rate. Therefore, many endoscopic methods have been developed to reduce the diameter of the gastric pouch and GJA, which include injection therapy into the anastomotic site, endoscopic suturing and plicating, and thermal ablation therapy using APC[2,12-15].

APC was initially developed as a treatment modality for gastrointestinal hemorrhage. It is a catheter-based system that utilizes a jet of ionized argon gas for non-contact electrocoagulation of tissue that can be applied through a standard endoscope. Because the probe does not have direct contact with the mucosa, the procedure is safe and the depth of coagulation is limited to only a few millimeters. The depth of penetration is associated with power input in watts and the greater the wattage applied the deeper the penetration, which may result in injury to the muscular layer. After APC ablation is performed around the anastomotic ring, tissue contracts and results in scar formation, which reduces the caliber of the GJA. As a result, the goal of delayed emptying and early satiety can be achieved, and this contributes to weight loss. In general, APC is safe with few complications reported in the literature, such as anastomotic stricture, ulcer formation, bleeding, and leakage at the GJA[2,11,15].

In this case, we present a patient with hemorrhage after APC. During endoscopy a visible vessel was observed at the GJA. Due to the fibrotic tissue after APC, a hemoclip was thought to not be a good option. Injection with epinephrine solution and thermal therapy with Coagrasper and bipolar coagulation were used with limited success. APC was also thought to be a poor option due to the depth of ulceration. Ultimately, we were able to control the bleed with Hemospray and to the best of our knowledge, this is the first case reported in the literature in which hemostatic powder was used to control bleeding after a revisional endoscopic procedure in a patient with RYGB.

Hemospray was approved as a hemostatic therapy in 2011 and has been shown to rapidly stop active bleeding with a high success rate. It is a novel inorganic powder with minerals which contains no human or animal proteins or botanicals. The powder can be sprayed via a catheter that can be inserted through the working channel of a standard adult endoscope and forms a cohesive barrier after coming into contact with moisture which leads to a tamponade by concentrating and activating platelets and coagulation factors and promoting thrombus formation. As a spray, it is very useful in the management of bleeding when the active bleeding site cannot be definitively localized. Hemospray is indicated for active bleeding (Forrest 1A and 1B) and can be used as a primary therapy or as a rescue therapy after conventional endoscopic treatments fail. After the powder absorbs fluid, it forms a mechanical barrier over the bleeding site. Hemospray is not absorbed by the body or through blood vessels, and the mechanical barrier formed by Hemospray does not need to be removed. The adherent barrier is designed to pass through the GI tract within 72 hours[16,17]. This device can be used as a definitive therapy as in our case or as a bridge to further interventions after hemodynamic stabilization.

APC revision of the GJA is known to be a relatively safe and effective strategy to manage weight regain post RYGB. Anastomotic site bleeding is an infrequent and potentially life-threatening complication associated with this therapy. Endoscopic management is first line therapy to achieve hemostasis in these cases. However, fibrotic ulcerative tissue after recent APC may limit the ability to achieve successful hemostasis with standard endoscopic interventions such as injection therapy, thermal therapy, and hemostatic clip placement. Therefore, as presented in this case, hemostatic powder is a useful therapeutic option to achieve hemostasis. This device may be useful as a primary or as a rescue therapy in this setting. More studies are required to better clarify the role of hemostatic powder for bariatric patients with active bleeding.