Research Domain of This Article
Nuclear Science and Technology

The central mechanism of idiopathic tinnitus is related to hyperactivity of cortical and subcortical auditory and non-auditory areas. Repetitive transcranial magnetic stimulation (rTMS) is a well-tolerated, non-invasive potential treatment option for tinnitus.

To investigate the changes of neural metabolic activity after rTMS in chronic idiopathic tinnitus (IT) patients.

Our study showed that 1-Hz rTMS directed to the left temporo-parietal junction resulted no statistically significant symptom alleviation. After treatment, brain areas of the limbic and prefrontal system showed high neutral metabolic activity. The auditory and non-auditory systems together will be the target for rTMS treatment.

Core tip: In this study, we focused on changes of neural metabolic activity in idiopathic tinnitus (IT) patients after repetitive transcranial magnetic stimulation (rTMS) treatment and further investigated changes in cortical activities of the whole brain. We found that after rTMS treatment, IT patients had increased activities in auditory, non-auditory, and limbic systems, and the activity decreased only in the target area with no statistically significant symptom alleviation. Our study may provide a new direction for rTMS target area.

Tinnitus is perceived as ringing or buzzing sound in the absence of an internal or external acoustic source, which occurs in approximately 15% of the population[1-3]. This repetitive perception relieves spontaneously within seconds or minutes and exerts a significant impact on sleeping, emotion, and attention[4].

Although tinnitus usually stems from the development of peripheral injury induced auditory deafferentation (acoustic trauma, drug toxicity, or presbyacusis) and central neural changes[1], the central mechanism has been proposed as neural plasticity with hypersynchrony and hyperactivity of cortical and subcortical auditory and non-auditory areas, which plays an important role in promoting and maintaining tinnitus[5-7]. The mechanisms of tinnitus generation are uncertain, and diagnosis and treatment are often empirical.

Repetitive transcranial magnetic stimulation (rTMS), namely, magnetic pulses delivered repetitively and rhythmically, has emerged as a well-tolerated, non-invasive potential treatment option for tinnitus[8,9]. TMS uses a stimulating coil to deliver pulse over the scalp. The frequency of pulse can be delivered at a low (≤ 1 Hz) or high frequ-ency (> 3 Hz) which could decrease or increase neural activity. Neurological mechanisms of TMS coil are to directly stimulate the superficial cortex and further inhibit the abnormal cortical hyperactivity by connecting neural pathways[10]. On repeated stimulation, the treatment effect can last from minutes to weeks or even months. Previous literature suggested a correlation between the activation of both primary and secondary auditory neural activity and therapeutic effects in tinnitus[11].

Nowadays, the major neuroimaging techniques include electroencephalography, functional magnetic resonance imaging (fMRI), and positron emission tomography (PET). Many studies found increased neural activity in the brain of tinnitus patients and further proved the centralization of tinnitus. The scanner noise produced by fMRI has been shown to interfere with auditory processing in the human brain at both the physiological and psychological levels[12]. The concept of resting state is somewhat problematic in tinnitus studies, because the auditory pathway is likely to be activated by scanner noise[13]. Previous studies either used single photon emission computed tomography (SPECT) [11] to assess the rTMS effect, or only analyze the regions of interest (ROIs) in PET data.

In this study, we focused on changes of neural metabolic activity in idiopathic tinnitus patients after rTMS treatment and further investigated changes in cortical activities both in and outside the target area. We also observed the correlation betw-een clinical symptom and brain areas, which is essential for treatment evaluation.

This study was approved by the local medical research ethics committee. Written informed consent was obtained from all subjects prior to enrollment. All patients and healthy volunteers were recruited at Beijing Friendship Hospital, Capital Medical University. The inclusion criteria were: (1) 20-75 years old; (2) Idiopathic tinnitus > 6 mo of duration; and (3) Complying with the study procedures. The exclusion criteria included a history of hyperacusis (evaluated by audiologists), hearing loss (hearing thresholds > 25 dB HL at frequencies of 0.250, 0.500, 1, 2, 3, 4, 6, and 8 kHz determined by pure tone audiometry (PTA) examination), cardiac pacemaker or other metal implants or device, pregnancy, diagnosis of neurological or psychiatric disorder, epi-lepsy, and history of seizure.

Eleven idiopathic tinnitus patients and 11 healthy subjects with matched age, gender, and education were enrolled in our study. All of the enrolled subjects were right-handed. All patients were assessed by the scale of tinnitus handicap inventory (THI) and visual analogue score (VAS) for the evaluation of tinnitus severity and related distress[14,15].

rTMS was delivered once a day at an intensity of 90% motor threshold (MT) using a magnetic stimulator (STM9000, EB Neuro S.p.A, Italy) with butterfly air-cooled coil system (70 mm diameter). The targeted area was defined in the left temporoparietal cortex. The treatment was 1000 TMS pulses at a frequency of 1 Hz for a total of 30 min for 10 consecutive days.

The coordinate for placing the coil was centered at the midline between the electro-encephalographic electrode positions T3 and P3 with the coil angled about 45°[16,17]. MT was determined at the beginning of the study as the lowest stimulus intensity that produced motor-evoked potential of at least 50 μV in the first dorsal interosseus (FDI) muscle of the subject’s dominant hand (right hand in all subjects) in a series of 10 stimuli delivered over the left primary motor cortex at an interval of 10 s[18]. To mini-mize the rTMS-related noise and restrict head motion, all participants wore earplugs and cradled with a foam supporter.

All patients underwent brain scans at baseline and after a 10-d session using a Biograph PET/CT scanner (Biograph, Siemens). After intravenous injection of 3.7 MBq/kg 18F-fluorodeoxyglucose (FDG), subjects were placed at rest for 1 h in quiet environment with eyes closed. Image acquisition was started 50-60 min after injection. Images were reconstructed using the ordered subsets expectation maximization (OSEM) algorithm with 5 iterations and 32 subsets.

Gretna software (Graph-theoretical Network Analysis Toolkit) was used to extract and calculate baseline and post-treatment ROI values. For each patient, we extracted 90 brain regions based on the Anatomical Automatic Labeling (AAL) model.

Pearson's correlative analyses were also conducted among the ROIs of 90 brain areas and clinical data of idiopathic tinnitus patients.

RESULTS
Demographic and clinical characteristics of the subjects 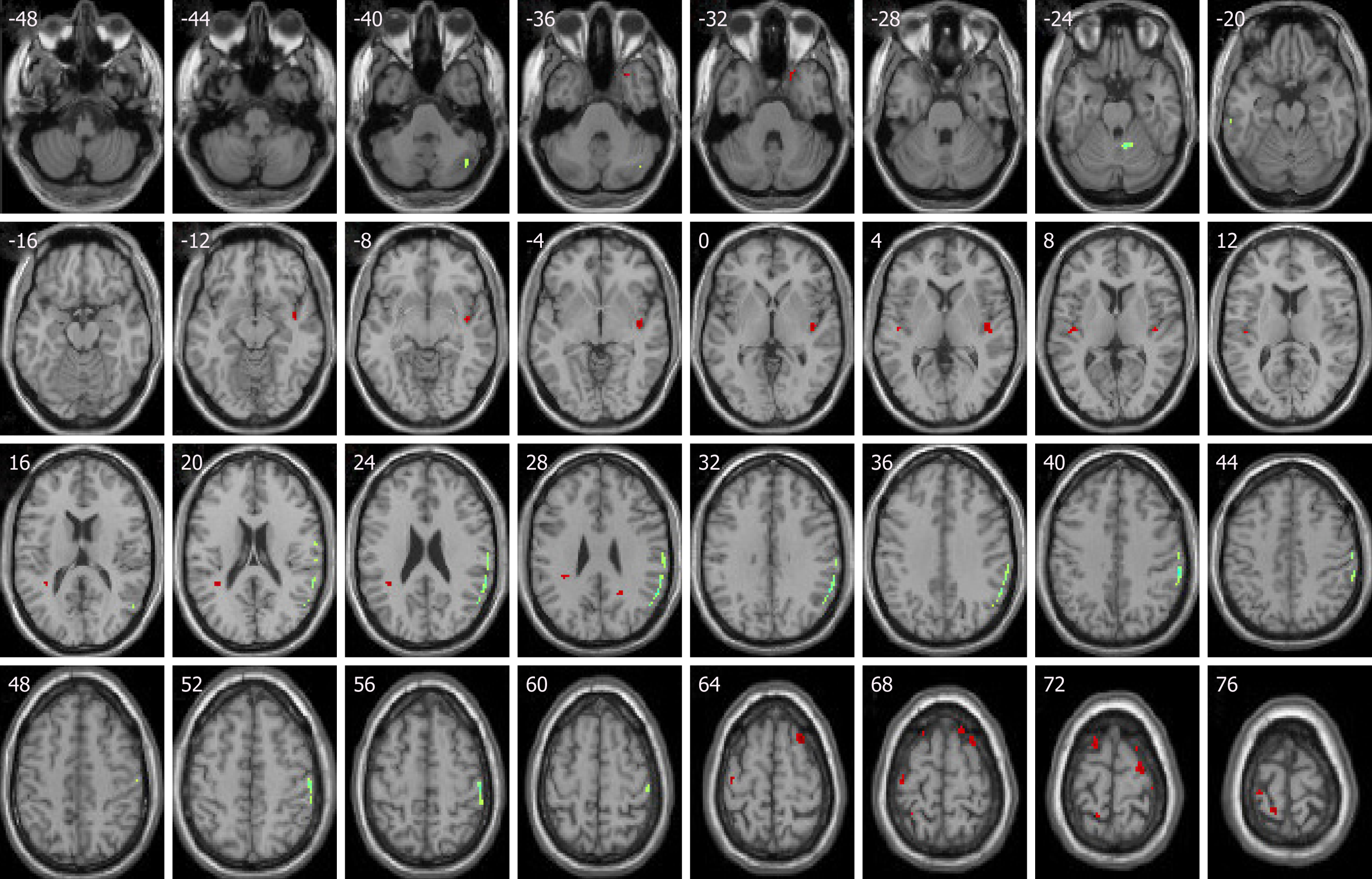 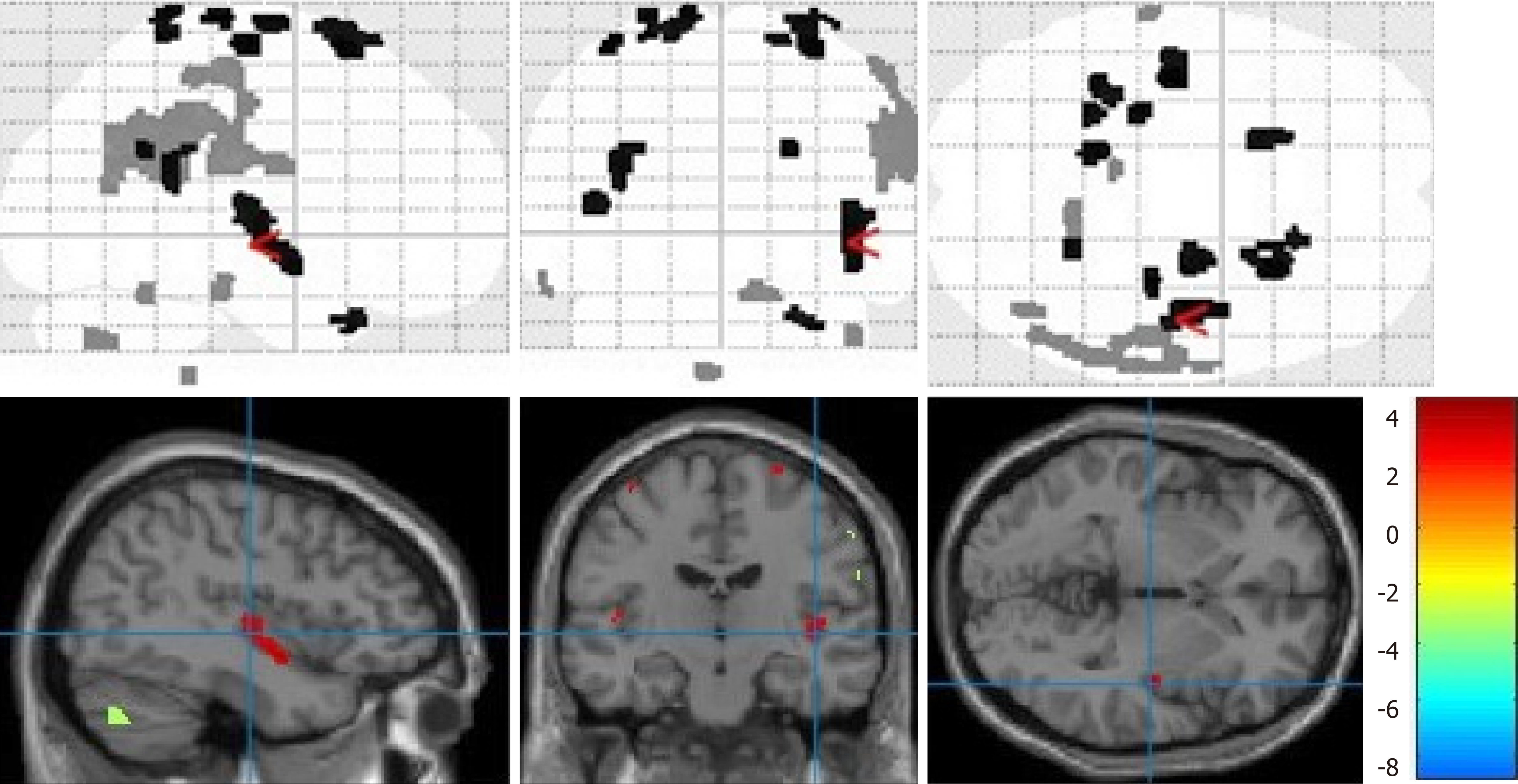 The tinnitus management strategy includes diet modification, medication, retrain-ing and masking therapies, and rTMS. No single intervention had been identified to be specifically effective against symptoms of tinnitus. 1-Hz rTMS is emerging as a promising treatment for chronic tinnitus. It is noninvasive and uses a magnetic field to create micro-current within the brain and further decrease cortical excitability in the ipsilateral motor or premotor cortex.

Functional brain imaging techniques such as fMRI, PET/CT, and SPECT can reflect brain activity and associated effects in motor and distant cortical areas after rTMS. fMRI depends on the signal of blood oxygen level. Whereas, PET reflects the glucose metabolism in neural tissue using 18F-FDG as a radiotracer. Previous studies have used fMRI to investigate the effect of rTMS in chronic tinnitus, and multiple brain networks in tinnitus have been identified. Two main themes have been proposed: One is increased correlation between limbic areas and other brain regions, and the other is correlation differences between attention-processing regions and other parts of the brain. PET has more advantages over fMRI in tinnitus research regarding functional imaging[20]. First, PET is better suited for assessing the inferior frontal gyrus and anterior temporal lobes. Second, PET is more appropriate for tinnitus subjects with cochlear and other implants, and is more claustrophobically friendly. Finally, PET is a quiet imaging technique. fMRI produces considerable noise (up to 130 dB), which may be disturbance in auditory studies[21].

Our results showed that THI score had a significant difference before and after rTMS treatments in chronic tinnitus patients and symptom alleviation lacked. Results showed that the left ITG and left postcentral gyrus had decreased activities, but the right PHG, STG, and SFG had increased activities after the left temporoparietal junction (TPJ) was stimulated. Based on previous studies, the SFG has been regarded as the major hub of tinnitus network, which receives and integrates different information from the brain. The PHG has been hypothesized to play an important role in memory collection from the hippocampus and in generation of tinnitus[22]. rTMS only decreased activation of the target site, but evoked further activation in distal non-auditory brain regions. The explanation is as follows. On the one hand, these remote effects may be connected to the TMS target site either anatomically or functi-onally. rTMS treatment probably induced generalized changes in functionally linked networks that regulate the emotional, attentional, and perceptual aspects of tinnitus. On the other hand, the complex interactions existed between target site and stimulation parameters. The TPJ alone may not be the ideal target for rTMS therapy in tinnitus patients. It is possible that there are widespread cortical changes in tinnitus subjects, which cannot be treated by a single localized therapy.

The notion of tinnitus being relieved by rTMS through inhibiting excessive neural activity in auditory center of the temporal lobe is probably incorrect. The effect of rTMS needs further improvement. One method is PET-based neuro-navigational rTMS, but the overall treatment efficacy might not be superior to TPJ-rTMS[23]. Another method is network analysis. Previous studies proposed that the small world network may be the complex, adaptive network[24]. However, there is still a lack of functional network analysis and further prediction of rTMS outcome. We put forward the hypothesis that effective rTMS therapy requires individualized, multi-target stage, covering both the auditory and non-auditory (limbic and prefrontal) systems[25]. Long-term symptom alleviation may be the result of changes in one or more neural net-works. Functional brain imaging, especially FDG-PET, can be useful in prediction of treatment outcome.

Our study has some limitations. First, the sample was small. Further enlargement of sample size is necessary. PET network analysis might be performed to explain the mechanism pathophysiologically. Second, there was no sham stimulus in our research in consideration that this was a neural function-oriented study, other than a thera-peutic effect study. Third, the correlation analysis was only based on THI scores and neural metabolic activity. Future studies will compare more clinical outcome with brain areas.

In conclusion, chronic idiopathic tinnitus has its characteristic neural metabolic activity in corresponding brain areas. Application of 1-Hz rTMS directed to the left TPJ results in no statistically significant symptom alleviation. Our results suggest that the left TPJ alone may not be sufficient for chronic idiopathic tinnitus treatment. Functional imaging-based neuro-navigational network treatment may identify the best targets for rTMS treatment.

The central mechanism of idiopathic tinnitus includes neural plasticity with hypersynchrony and hyperactivity of cortical and subcortical auditory and non-auditory areas.

Our study focused on metabolic changes of neural activity in idiopathic tinnitus patients after rTMS treatment and further investigated changes in cortical activities both in and outside the target area.

Idiopathic tinnitus patients and age-, gender-, and education-matched healthy controls were enrolled in our study. All patients underwent PET/CT scans at baseline and after 10 days of session. Statistical parametric mapping (SPM 12) were used to preprocess PET data.

Our results showed that tinnitus handicap inventory (THI) score had no significant difference before and after rTMS treatment in chronic tinnitus patients and symptom alleviation lacked.