Left ventricular wall rupture (LVWR) comprises a complication of acute myocardial infarction (AMI). Acute LVWR is a fatal condition, unless the formation of a pseudoaneurysm occurs. Several risk factors have been described, predisposing to LVWR. High index of suspicion and imaging techniques, namely echocardiography and computed tomography, are the cornerstones of timely diagnosis of the condition. As LVWR usually leads to death, emergency surgery is the treatment of choice, resulting in significant reduction in mortality and providing favorable short-term outcomes and adequate prognosis during late follow-up. Herein, we present two patients who were diagnosed with LVWR following AMI, and subsequent pseudoaneurysm formation. In parallel, we review the aforementioned condition.

Core tip: Ventricular wall rupture (LVWR) comprises a complication of acute myocardial infarction. Acute LVWR is a fatal condition, unless the formation of a pseudoaneurysm occurs.

Cardiac rupture as a pathophysiological entity was first described by Harvey[1] in 1647. It is a complication of acute acute myocardial infarction (AMI) with an overall incidence of 6.2%[2,3]. It represents the second cause of death after cardiogenic shock, and accounts for as much as 15% of in-hospital mortality[4-6]. Rupture may involve any cardiac structure, i.e., atria, ventricles, interatrial or interventricular septum, papillary muscles or chordae tendineae, or one of the heart valves. Left ventricular wall rupture (LVWR) occurs up to 10 times more frequently than septal rupture, affecting up to 11% of patients after AMI and is almost invariably fatal, with death occurring within minutes after the development of chest pain[6]. In contrast, subacute LVWR and containment by false aneurysm formation of the pericardial layers may lead to patient’s survival for hours or even days, but rarely weeks[7-9].

A 62-year-old man was referred for echocardiographic evaluation. Two weeks ago, he had been admitted to another hospital for a non-ST segment elevation myocardial infarction for which he had undergone coronary arteriography. Coronary angiography revealed a 60% occlusion of the left anterior descending artery (LAD), a totally occluded right coronary artery (RCA), and a totally occluded left internal mammary artery (LIMA) graft to the LAD. The patient’s history included coronary artery bypass grafting operation, with a LIMA graft to the LAD, and an ascending aorta replacement with an aortic graft (Hemashield straight tube, Boston Scientific) due to aneurysm, twelve years earlier. Moreover, nine years ago, he had undergone percutaneous coronary angioplasty and had received a drug-eluting stent to the RCA. Echocardiography revealed rupture of the left ventricular posterior wall which was contained by pericardium, thus forming a sizeable pseudoaneurysm (Figure 1). There was no significant pericardial effusion and the overall systolic function of both ventricles was found within normal limits. Based on the echocardiographic diagnosis the patient was admitted to our hospital for further investigation and treatment. The patient’s admission 12-lead surface electrocardiogram (ECG) showed ischemic changes in the inferior leads (II, III, aVF). Cardiac computed tomographic angiography (Figure 2A) and volume rendering technique (Figure 2B) confirmed the presence of a pseudoaneurysm, with 50 mm × 50 mm dimensions, at the posterior wall of the left ventricle. The patient was referred to Surgery and a surgical repair of the defect with application of a Dacron patch with continuous suture was performed. Repeat echocardiography demonstrated a well-placed patch at the site of the rupture, enforcing the walls of the pseudoaneurysm. The patient had an uneventful postoperative recovery and was discharged on day 6 with explicit instructions and medication. 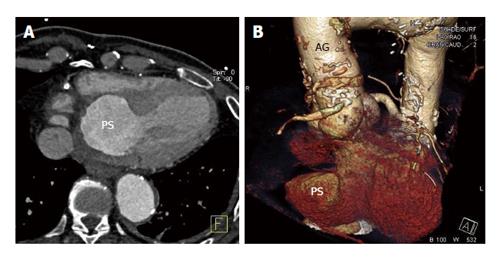 An 86-year-old man presented with exertional dyspnea of five months duration. He had a history consistent with chronic atrial fibrillation under acenocoumarol and atenolol, and dyslipidemia under simvastatin. He had no history of documented coronary artery disease the 12-lead ECG showed Q waves in leads III and aVF. He was hemodynamically stable with normal vital signs. The echocardiographic study demonstrated a pseudoaneurysm at the akinetic basal inferior lateral wall of the left ventricle, close to the base of the anterolateral papillary muscle (Figure 3). The overall function of the left ventricle was preserved. Cardiac computed tomographic angiography and volume rendering technique revealed significant atherosclerosis and coronary arteries narrowing. The echocardiographic findings were confirmed; a circular opacified 19 mm × 16 mm protrusion originating from the lateral wall of the left ventricle was observed (Figure 4). The patient’s clinical condition and echocardiographic findings remained stable over his 3 years follow-up. 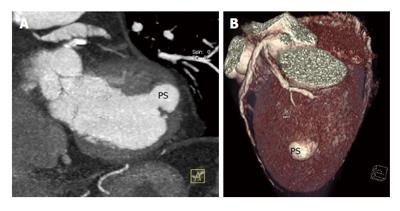 The traditional risk factors for LVWR include older age (> 60 years), female sex, first lateral or anterior wall AMI, severe one-vessel coronary artery disease with lack of collateral circulation, and absence of previous angina[4,10,11]. On the contrary, the presence of multivessel disease may exert a protective effect, probably linked to development of greater collateral circulation[12]. Furthermore, it has been reported that the majority of patients with LVWR had suffered ST segment elevation AMI, with positive cardiac biomarkers, and a higher heart rate, lower blood pressure, and higher GRACE risk score at admission than patients without LVWR[13-15]. Chronic hypertension and diabetes mellitus do not seem to modify the incidence of LVWR[16], and contrary to a previous report[17], steroid use and late thrombolysis do not appear to increase the risk of LVWR[18,19]. Concerning thrombolysis, three mechanisms have been proposed as been responsible for occurrence of LVWR: hemorrhage to the ischemic zone resulting in loss of muscular tissue strength[20,21], increased collagen degradation and synthesis restrain by thrombolytic agents[22], lymphocytic migration to the infarct zone initiating absorption of collagen and proteolysis[21]. Depending on the time of its occurrence, LVWR may be classified as early, when it develops within the first 48 h post-AMI, or late, when it occurs beyond 48 h post-AMI. The early form represents 40%-50% of cases[23], however it is generally accepted that the true proportion is likely to be higher when including patients who die suddenly from LVWR before reaching hospital[24].

Rarely, LVWR is contained by an adherent pericardium, creating a pseudoaneurysm. Differentiation between left ventricular aneurysm and pseudoaneurysm is difficult, yet it is the most important task to carry out in order to facilitate therapeutic decision making. Pericardial friction rub, decreased heart sounds, sinus bradycardia or junctional rhythm, are all signs of pseudoaneurysm[25]. However, chest pain, dyspnea and hypotension, as well as persistent ST segment elevation in the area of AMI on the surface ECG, are common for both true aneurysm and pseudoaneurysm[26]. Thus, distinguishing between these two entities is very difficult merely on a clinical basis, because many characteristics are common. Especially concerning electrocardiographic predictors of LVWR and aneurysm or pseudoaneurysm formation, a deviation of the ST segment or T wave, or both, from the usual evolutionary pattern after AMI has been observed[27]. Furthermore, differing opinions exist concerning the most common site of LVWR. Some reports indicate the anterior wall as the most frequent site of aneurysm and pseudoaneurysm formation, where areas more recent series have observed a predominance of lateral and posterior wall ruptures[27].

Imaging modalities in the diagnosis of LVWR in AMI

The most available and sensitive diagnostic tool to establish the different types of cardiac rupture is echocardiography[28]. In patients with LVWR the most frequent echocardiographic finding is pericardial effusion; in fact, the absence of pericardial effusion has a high negative predictive value and excludes cardiac rupture in patients with AMI[29]. However, in our cases no pericardial effusion was found. The presence of pericardial effusion has a low positive predictive value for LVWR as it may be present in 28% of patients with AMI without cardiac rupture[30]. The absence of pericardial effusion in our patients could be due to the lack of rupture of the left ventricular wall. The presence of echogenic masses in the effusion fluid is a relevant sign, particularly in patients with subacute LVWR, since these signs may be found in fibrinous pericarditis associated with AMI[31]. Direct visualization of the myocardial tear, true aneurysm or pseudoaneurysm is diagnostic, however, it is possible in only one third of LVWR cases[32]. Recently, cardiac magnetic resonance (CMR) imaging, especially with contrast enhancement, has emerged as a valuable diagnostic tool providing visualization of the entire heart, and clear differentiation of structures such as the pericardium, myocardium, thrombus and epicardial fat[33], as well as the pathological scar tissue substrates for life-threatening ventricular arrhythmias in AMI patients[34]. CMR can provide morphological definition of LVWR and pseudoaneurysm location, extension and relation to adjacent structures. Furthermore, CMR has an enormous value in differentiating between left ventricular aneurysms and pseudoaneurysms, in stable patients, with the ability to obtain cross sectional views in any plane[35].

We presented two patients who survived LVWR following an AMI. The patients’ survival was clearly due to the containment of the rupture by the pericardial sac and the formation of the pseudoaneurysm. As LVWR usually leads to death, emergency surgery is the treatment of choice regardless the patient’s condition. Surgical repair, enforcing the pericardial layers at the ventricular locus resistentiae minoris, results in significant reduction in mortality and provides favorable short-term outcomes and adequate prognosis during late follow-up[36]. Interestingly, our second patient survives for 3 years after diagnosis without surgery. Early diagnosis of LVWR is based on clinical suspicion. Echocardiography is of paramount importance, while computed tomography and CMR can be used to confirm diagnosis in stable patients.

There are no specific laboratory findings in the condition described. However, negative cardiac enzymes could exclude novel myocardial infarction.

Echocardiography is the most useful and available imaging method in the diagnosis of left ventricular aneurysm and pseudoaneurysm formation. Computed tomography and cardiac magnetic resonance are complementary modalities, however of paramount importance in differentiating between the two aforementioned entities.

Surgery is the treatment of choice for post-myocardial infarction left ventricular pseudoaneurysms.

Left ventricular rupture and pseudoaneurysm formation have been described in the literature. However, long-term follow-up in an untreated patient (the authors’ second case) is quite rare.

LVWR following an AMI and containment by false aneurysm formation of the pericardial layers may lead to patient’s survival for hours or even days, but rarely weeks.

LVWR may be a rare condition in the era of primary percutaneous interventions, however it should always be a consideration in post-myocardial infarction patients.

This is an interesting manuscript.