We present the case of a 74 year old woman suffering from severe mitral valve incompetence and rapid atrial fibrillation. After an appropriate vitamin K antagonist (VKA) therapy, the patient underwent mitral valve replacement by bioprosthesis. Then, the patient was re-hospitalized for jaundice. Suspecting hepatotoxicity, VKA was discontinued and fondaparinux was started. During this treatment, the patient developed a symptomatic atrial thrombus. After exclusion of a hepatic disease, VKA was re-established with hemodynamic and liver enzymes normalization and atrial thrombus resolution. Caution has to be used when considering fondaparinux as an alternative strategy to VKA in patients with multiple thrombotic risk factors.

Core tip: Thromboembolism represents an important complication following heart valve replacement. This case report shows that although vitamin K antagonist (VKA) treatment represents the elective therapy in patients with left atrial thrombosis without mitral valve dysfunction, it may not be sufficient to avoid thrombogenesis. We also recommend that the discontinuation of VKA during the first three months after mitral valve surgery has to be carefully considered, especially in high thromboembolic risk patients.

Thromboembolism represents an important complication following heart valve replacement. The international guidelines on the management of valvular heart disease recommend postoperative anticoagulation therapy (AT)[1]. While mechanical valves require lifelong anticoagulation therapy, bioprosthetic valve (BV) recipients can avoid long-term use. Owing to the higher frequency of thromboemboli in the first 3 mo after BV insertion, three months of AT is recommended for patients not receiving antithrombotic therapy, especially for those who undergo bioprosthetic mitral valve replacement[2]. However, in the presence of atrial fibrillation (AF), heart failure and impaired LV function (ejection fraction < 30%), AT has to be continued for life. 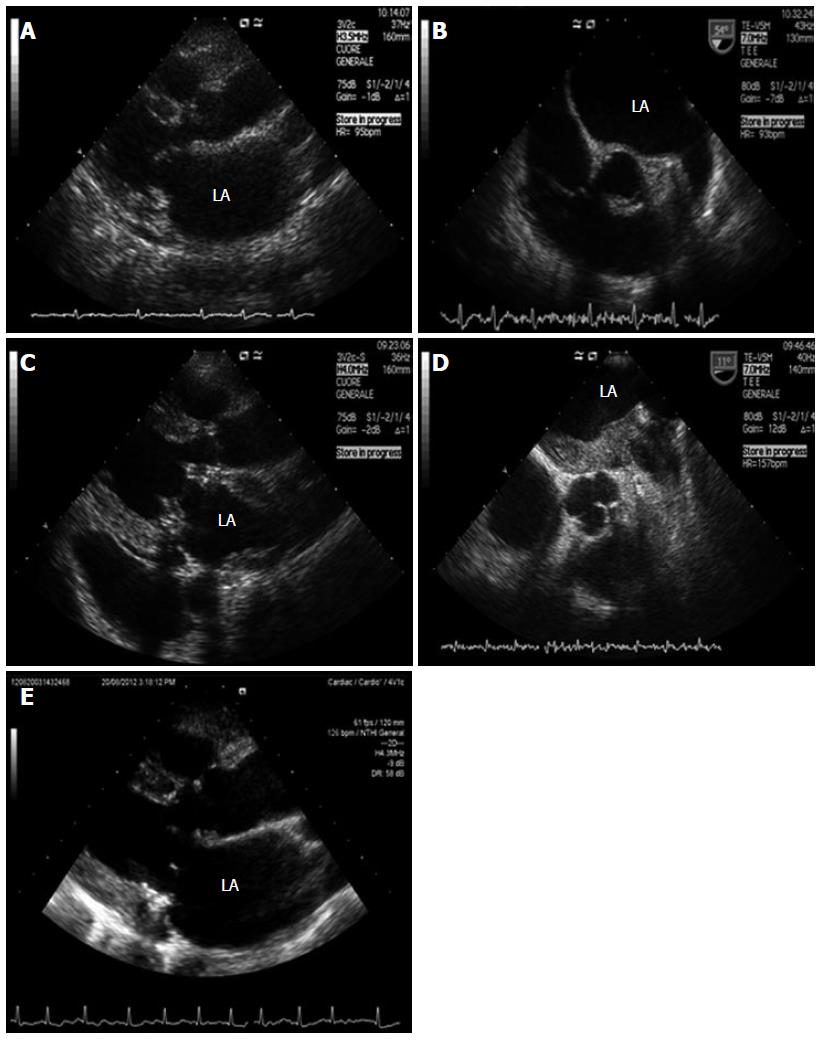 In June 2012, the patient was re-admitted because of jaundice and abdominal pain. EKG showed atrial fibrillation. Liver and biliary tract diseases were ruled out despite hyperbilirubinemia and cholestasis indexes (bilirubin was 15.63 mg/dL, γ-glutamyltransferase 1638 U/L, alkaline phosphatase 621 U/L, aspartate aminotransferase 30 U/L, alanine aminotransferase 63 U/L). VKA was discontinued due to suspected hepatotoxicity and fondaparinux was subcutaneously administered (5.0 mg/d). Due to peripheral edema, jugular turgor and hepatomegaly, TTE was repeated over the following days. We found a mass stratified on all the atrial walls (Figure 1C). TEE confirmed that the image was suggestive of thrombus (Figure 1D). Diagnostic workup excluded a thrombophilic state, viral/autoimmune liver disease, cancer or biliary duct pathology. In the first days of July 2012, VKA treatment was re-started and fondaparinux was stopped. In August 2012, the patient showed hemodynamic stability and normalization of the liver function and enzymes, while TTE excluded the presence of a thrombus in the left atrium (LA) (Figure 1E). During 5 mo of follow up, the patient remained asymptomatic.

Unlike mechanical heart valves, BV insertion is associated with a very low rate of thrombosis (approximately 0.03% per year)[3]. After BV implantation, AT is recommended for the first 3 mo and for life only in the presence of atrial fibrillation, heart failure, impaired left ventricular function or history of thromboembolism. Currently, the only oral drugs approved for AT are VKAs.

There is no scientific evidence that the new oral antithrombotic agents (e.g., dabigatran, rivaroxaban and apixaban) are effective in these patients. Nevertheless, these drugs could represent a new interesting option because of their elevated safety and efficacy due to their pharmacodynamic profile and the absence of drug-to-drug interactions. The only possible alternatives to VKAs are unfractionated heparin (UFH) and low molecular weight heparins (LMWHs), but they must be administered intravenously or subcutaneously[1]. Our patient was admitted nearly 40 d after mitral valve surgery when anticoagulation therapy is considered mandatory. Since she was at high thrombotic risk (e.g., age, left ventricular dysfunction, atrial fibrillation, left atrial enlargement with atrial contractile failure), on the basis of the current guidelines, she should have continued AT indefinitely. This treatment strategy is mandatory for the primary prevention of cardioembolic ischemic stroke in patients with cardiac disorders (such as atrial fibrillation). Cardioembolic stroke is considered a high-risk complication and it represents the subtype of ischemic infarct with the highest in-hospital mortality (20%)[4].

Clinical practice shows that VKA therapy is very effective but long-term administration may be difficult, especially in elderly patients due to the variability in drug metabolism, drug-drug and drug-food interactions, patient compliance and risk of bleeding events.

The beginning of VKA therapy is burdened by a prothrombotic state, so we associated LMWH for few days until reaching the international normalized ratio (INR target), as recommended by international guidelines to avoid thromboembolism.

Our case confirmed this aspect: INR was 4.6 following heart surgery and 1.5 at re-hospitalization after four weeks of therapy at home. Thus, we had to improve anticoagulation by VKA therapy but our concern was related to the increased bilirubin levels and cholestatic indexes suggestive of an acute hepatitis with liver damage.

First of all, we excluded the most frequent causes of acute liver disease. No evidence of viral hepatitis, cholelithiasis and no use of hepatotoxic drugs or toxin ingestion were found. Thus, we theorized that the cause of increased bilirubinemia and cholestatic index levels could be related to the right heart failure with hepatic blood stasis and secondary liver dysfunction.

On the other hand, in accordance with previous reports[5], we did not continue administering VKAs. Furthermore, we could not administer UFH or LMWH due to the history of immune thrombocytopenia and, moreover, we found some reports of LMWH-induced hepatotoxicity. Thus, we decided to administer fondaparinux. We found little evidence (two experimental models[6,7] and a case report[8]) supporting the administration of fondaparinux (7.5 mg once per day) to prevent thrombosis in patients with mechanical heart valves. At that time, we speculated on the potential usefulness of a concomitant antiplatelet therapy (APT). However, we excluded this option considering that there was no evidence of improved efficacy and only an increased hemorrhagic risk.

During an echocardiogram that was carried out to investigate the clinical signs of right heart failure, we found a giant left atrial thrombosis.

These findings, together with the normalization of the hepatobiliary function indexes, suggested to us to discontinue fondaparinux and re-start VKA treatment. Another issue supporting this therapeutic strategy was represented by the concomitant presence of atrial thrombosis without valve dysfunction.

After one month of correct VKA therapy (INR target: 2-3), we not surprisingly found a normally functioning prosthetic valve, accompanied by the resolution of atrial thrombosis. Whether oral anticoagulation may result in the lysis of a thrombus is not clear. Studies carried out for cardioversion in atrial fibrillation have shown that 3-4 wk of warfarin therapy leads to complete resolution of atrial thrombi in 80%-90% of cases without evidence of clinical thromboembolism or residual organized adherent thrombus[9]. In our patient, this thrombus remodeling may have favored its re-absorption.

Although VKA treatment represents the elective therapy in patients with left atrial thrombosis without mitral valve dysfunction, this case shows that it may be not suitable for avoiding thrombogenesis. This case shows that in very high thromboembolic risk patients, VKA therapy never must be discontinued.

This case also suggests that discontinuation of VKAs during the first three months after mitral valve surgery has to be carefully considered, especially in high thromboembolic risk patients. Although we used fondaparinux as an alternative strategy, the efficacy of this drug requires further validation in larger clinical trials.

The re-initiation of therapy with the vitamin K antagonist led to complete thrombus resolution.

Potential liver toxicity induced by the vitamin K antagonist should be considered in clinical practice due to the wide distribution of this drug.

In expectation of new oral antithrombotic agents, the vitamin K antagonist remains the first choice for preventing thrombotic event in high-risk patients. In addition, these patients require a long-term therapy.

This article recommends a long-term anticoagulant therapy in high-risk patients and identifies the vitamin K antagonist as the most effective drug.