Research Domain of This Article
Anesthesiology

Although propofol generally reduces blood pressure, rarely, it causes hypertension. However, the mechanism by which propofol increases blood pressure has not been established, and so far, there are only a few reported cases.

A 46-year-old woman, diagnosed with thyroid cancer, was administered general anesthesia with propofol and remifentanil for a thyroid lobectomy. An increase in the concentrations of intravenous anesthetics further increased her blood pressure. The blood pressure remained stable when anesthesia was maintained with sevoflurane and remifentanil after the interruption of propofol administration.

We concluded that propofol administration was the cause of increased blood pressure.

Core Tip: Although propofol generally reduces blood pressure, it has been known to rarely cause hypertension. However, studies on this mechanism and related case reports are rare. We report a case of uncontrolled hypertension in a 46-year-old woman with no medical history who was administered total intravenous anesthesia with propofol and remifentanil. In our study, other factors that could cause an increase in blood pressure were excluded, and we concluded that propofol was the cause of hypertension. This is a rare, but useful, case for the anesthetic management of propofol-induced hypertension.

Propofol is known to decrease blood pressure (BP) by inhibiting the sympathetic nerve activity and decreasing the systemic vascular resistance (SVR)[1]. Propofol rarely increases BP; however, its mechanism of action has not been established yet. In a patient without any underlying disease, the BP increased after starting total intravenous anesthesia (TIVA) with propofol and remifentanil. An increase in the concentrations of intravenous (IV) anesthetics further increased the BP, which remained high despite the administration of an antihypertensive drug.

The patient visited our clinic after the diagnosis of thyroid cancer at a health checkup. She had not complained of any symptoms related to thyroid disease and her thyroid hormone levels were within the normal range.

The patient had no underlying disease, past medical history, or history of medication use, including health supplements.

The patient had no family history of thyroid cancer or essential hypertension.

Physical examination revealed that the patient’s general health condition was good. There were no apparent abnormalities. She had regular heartbeats, clear lung sounds, and no thyroid enlargement.

The preoperative laboratory results, including thyroid function tests and electrolytes, were normal.

A 46-year-old woman with no medical or family history was diagnosed with thyroid cancer and admitted for left thyroid lobectomy. After routine preoperative examinations and anesthetic evaluations, there were no problems with her physical, laboratory, and radiological examinations. The patient had not complained of any anxiety or stress before the surgery, and the mean preoperative BP at the ward was 19.3/10.5 (15.2-22.4/9.6-10.9) kPa. No premedication was needed because the patient was comfortable. The initial BP and heart rate (HR) after entering the operating room were 18.8/11.3 kPa and 52 beats/min, respectively.

Anesthesia induction was initiated with propofol and remifentanil at target concentrations of 6 μg/mL and 3 ng/mL, respectively, using a target-controlled infusion pump. After confirming the loss of consciousness and the availability of manual bagging, 6 mg of vecuronium was administered intravenously. As the BP increased from 18.8/8.8 kPa to 22.0/10.7 kPa, the concentrations of propofol and remifentanil were increased to 7.5 μg/mL and 4.5 ng/mL, respectively. After confirming the decrease of the bispectral index (BIS) to 35 and disappearance of all twitches from the train of four stimulations, intubation was performed using a video laryngoscope. Immediately after induction, the HR decreased to 41 beats/min and atropine (0.5 mg) was administered intravenously, followed by glycopyrrolate (0.2 mg). No further events were observed during induction, and the concentrations of propofol and remifentanil were decreased to 3 μg/mL and 1 ng/mL, respectively, to prevent a drop in BP and HR before surgery.

The surgery was suspended owing to unexplained hypertension. Following the administration of sevoflurane 5 vol%, a slight decrease in systolic BP from 26.7 kPa to 23.9 kPa was observed. The BP returned to the normal range after suspension of propofol administration and maintenance of anesthesia with sevoflurane 3 vol% and remifentanil 3 ng/mL. Surgery was resumed after catheter insertion into the left radial artery to initiate invasive BP monitoring. BP remained stable at 13.3-16.0/8.0-10.7 kPa until the end of surgery. The total amount of 2% propofol administered was 900 mg (45 mL). The patient was discharged without any adverse events.

The final diagnosis in this case was thyroid cancer; this was the same as the preoperative diagnosis.

The patient underwent a left thyroid lobectomy. There was no additional treatment except for routine postoperative care.

The cancer was completely removed and the patient was discharged without any complications.

Propofol is widely used for general anesthesia and monitored anesthesia care during diagnostic or therapeutic procedures because of its rapid onset, fast recovery time, and reduced severity of side effects. Propofol is known to decrease the BP by inhibiting the sympathetic nerve activity and decreasing the SVR[1]. Although it is widely known that propofol generally reduces BP, the mechanism for increase in BP has not been established, and related case reports are rare.

In a patient who was treated for narcolepsy with modafinil, inhalation anesthetics had to be used because anesthesia could not be achieved (BIS was 72) after induction with 6 mg/kg of propofol[3]. Bache et al[4] reported insufficient anesthetic effects of propofol and remifentanil for general anesthesia in three cases over 5 years and suspected the possibility of acute tolerance to remifentanil. In this case, the patient had no medical or drug history and the BIS decreased to 35 after the administration of IV anesthetics; therefore, resistance to propofol and acute tolerance to remifentanil can be excluded.

Mean arterial pressure is calculated as cardiac output × SVR and stroke volume × HR × SVR. No change in HR after propofol administration was observed in our case. Even though we placed an arterial catheter, a pulse contour analysis or cardiac Doppler device was not used; regrettably, the cardiac index was not monitored. In addition, at the time of invasive BP monitoring, BP normalized. When propofol-induced hypertension is suspected, early monitoring of cardiac index to analyze the cause of hypertension is important.

Psychological factors, such as anxiety and stress, are one of the most common causes of perioperative hypertension. The patient in our case was comfortable when her emotional status was evaluated by her nurse (twice on admission and on the day of surgery). In addition, the mean preoperative BP at the ward was 19.3/10.5 (15.2-22.4/9.6-10.9) kPa, and BP at the time of entering the operating room was 18.8/11.3 kPa. Since her preoperative BP was controlled, we concluded that negative feelings before surgery were less relevant to high BP.

We had to exclude the possibility of undiagnosed essential hypertension even though the patient did not have any comorbidities. She had not been previously diagnosed with hypertension and had no family history of essential hypertension. In addition, as we described, her preoperative BP was stable. The preoperative electrocardiogram showed normal sinus rhythm and there was no cardiomegaly on chest radiography; therefore, we concluded that her BP had been well controlled.

No swelling on the injection site or disconnection of the infusion line was observed. In addition, BIS levels were maintained at approximately 40 throughout the surgery. When the concentration of propofol was increased to 9 μg/mL, a decrease in the BIS level to 7-9 was observed. The patient confirmed that there was no instance of wakefulness during the surgery. Therefore, it can be concluded that hypertension was not due to insufficient depth of anesthesia or wakefulness.

Owing to the suspicion of undiagnosed pheochromocytoma, surgery was suspended for approximately 10 min for observation. Pheochromocytoma could not be confirmed because abdominal computed tomography and hormonal tests were not performed. However, the possibility of pheochromocytoma was considered low as BP was consistently high without fluctuation, regardless of the surgical stimulation, and it stabilized after suspending propofol and switching to sevoflurane.

The possibility of hypertension caused by thyrotoxicosis was excluded since the preoperative thyroid hormone levels of the patient were normal with T3: 109 ng/dL, free T4: 0.98 ng/dL, and TSH: 1.74 μIU/mL. In addition, the patient had no symptoms of thyrotoxicosis such as tachycardia, weight loss, or heat intolerance.

In our case, there were several instances in which BP increased owing to propofol administration (Figure 1). 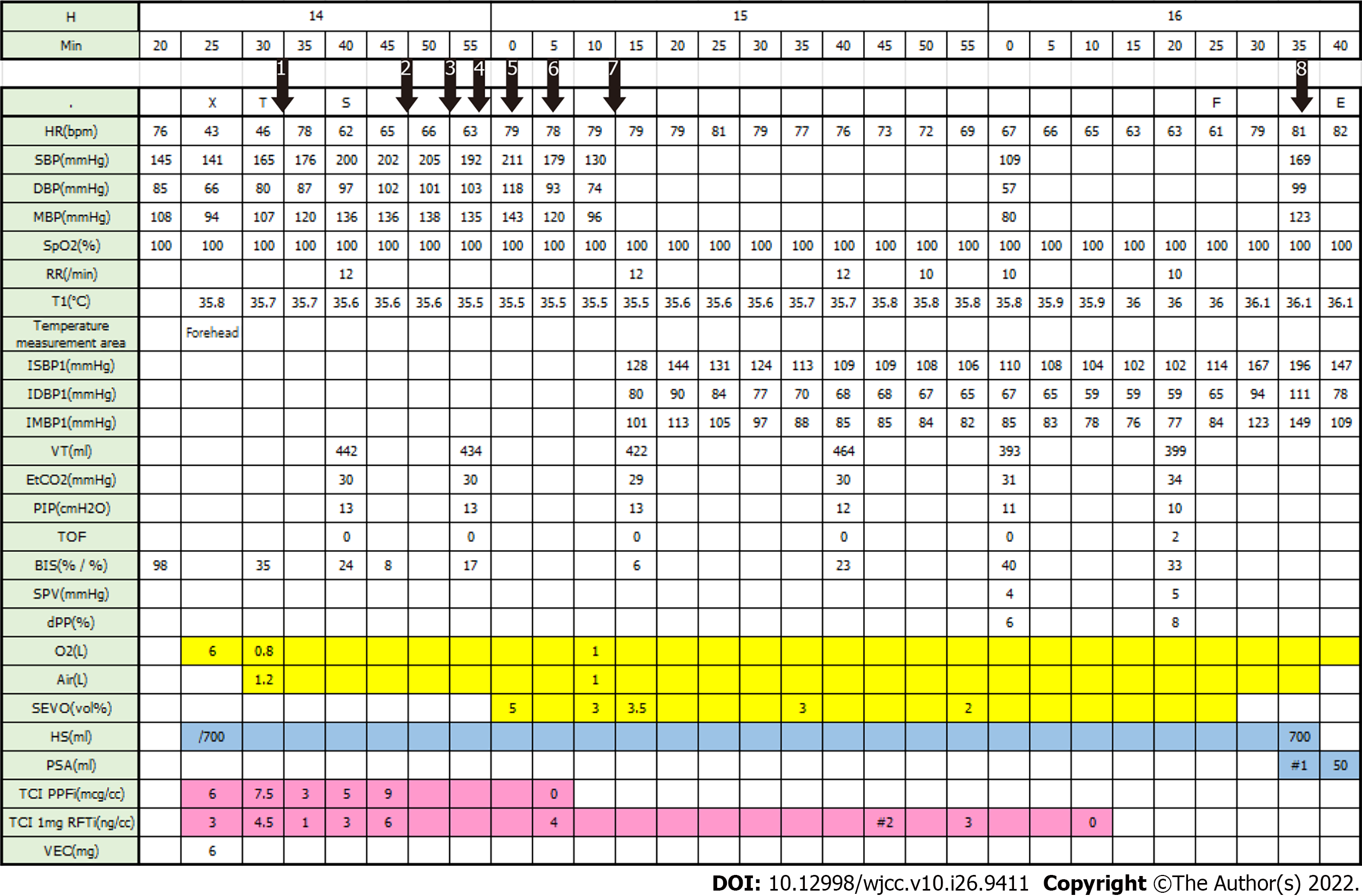 First, when anesthetic induction was initiated with a target concentration of 6 μg/mL of propofol and 3 ng/mL of remifentanil, BP increased from 18.8/8.8 kPa to 22.0/10.7 kPa, while HR decreased. Intubation was performed after increasing the propofol and remifentanil concentrations to 7.5 μg/mL and 4.5 ng/mL, respectively.

Fourth, although sevoflurane was administered at 5 vol%, systolic BP only decreased slightly from 26.7 kPa to 23.9 kPa. However, systolic BP abruptly decreased to 16.0-17.3 kPa within 3 min after suspending propofol infusion.

We concluded propofol administration was the cause of increased BP in our case after excluding multiple possible causes of severe hypertension. Although rare, anesthesiologists should consider the possibility of propofol-induced hypertension, and BP should be controlled in an appropriate and timely manner.