A 65-year-old woman was admitted to our hospital because of dysuria. She presented with dysuria, frequent urination, urgency, pain, and absence of hematuria and pyuria. After the examination, bladder tumor electrocision was performed under combined intravenous and inhalation anesthesia on September 6, 2021. During the operation, electrotomy and electrocoagulation were performed. The operation was then followed by anti-infection treatment, and the patient recovered well. The postoperative pathology was diagnosed as bladder malacoplakia by light and electron microscopic analyses. On a follow-up after 4 mo, no significant difference between electrotomy and electrocoagulation was found, with both achieving a curative effect.

Bladder malacoplakia[1] is a rare chronic granulomatous lesion. The disease was first reported by Michaelis and Gutmann in 1902, and its most common site was the urinary system, followed by the reproductive tract, gastrointestinal tract, and retroperitoneum[2,3]. The etiology of this disease is complex, and its clinical misdiagnosis rate is high. To improve the diagnosis and treatment of bladder malacoplakia, we herein reported the clinical manifestations, pathological characteristics, and follow-up process of the diagnosis and treatment of one case of bladder malacoplakia in our hospital.

A 65-year-old woman presented with dysuria for 1 year and increased symptoms for 2 mo.

The patient had dysuria for 1 year, the symptoms of which had worsened in the 2 mo prior to admission and were characterized by dysuria, frequency, urgency, and absence of hematuria and pyuria.

The patient had a history of hypertension for 2 years. Approximately 33 years ago, the patient had undergone hysterectomy for uterine fibroids, with the postoperative recovery noted to be good.

The patient had no remarkable personal history and no similar family history.

Physical examination revealed no tenderness in the bilateral rib angles and ureteric regions, as well as no pain upon percussion of the bilateral kidney areas. In addition, there was no bladder fullness, deep tenderness, or rebound pain.

The patient was treated with quinolone antibiotics and transurethral resection of the bladder tumor. The patient had not been taking cholinergic drugs or vitamin C. Based on the intraoperative findings (Figure 1), there was no hematuria or any abnormality in the bilateral ureteral orifices. Multiple pale yellow brain loop-like uplifts were found in all bladder walls, with a maximum area of 3.0 cm × 2 cm. With a wide base, the surface mucosa of the tumor remained smooth, and no obvious bleeding, necrosis, or calcification was found. Inflammatory follicular hyperplasia was observed in the bladder triangle; there were no occupying lesions. The tumors in each wall of the bladder were removed and deeply cut into the muscular layer (basal part). Some tumors were simply electrocauterized with bladder tumors, and a pathological examination was performed on the tumor body and basal part.

The pathological results were as follows (the pathological tissue was the body part and the basilar part of the bladder tumor): Microscopically, diffuse infiltration of tissue cells, mild cell morphology, abundant cytoplasm, eosinophilic granular and concentric circular arrangement of basophilic Michaelis–Gutman (M-G) bodies, as well as infiltration of lymphocytes, plasma cells, eosinophils, and neutrophils were observed (Figure 2). 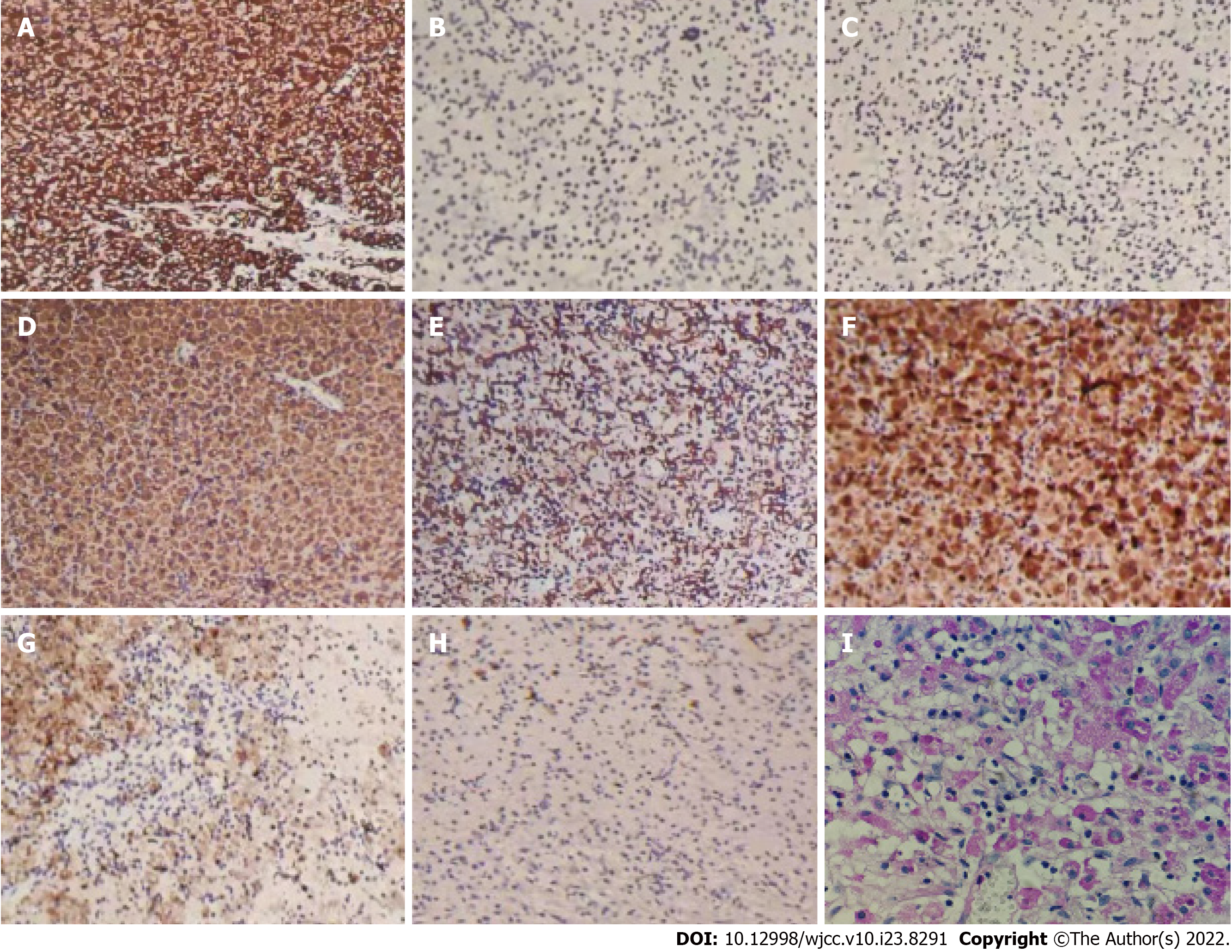 Electron microscopy (Figure 4) revealed phagocytic lysosomes and M-G bodies (indicated by the arrow) in the cytoplasm of macrophages, which were generally rounded. A variability of the phagocytic matrix, microbubbles, and an abundance of bacteria were found in phagocytic lysosomes. Some bacteria were digested and dissolved, and medullary structures, such as microcrystals, were observed. The latter was especially found in larger structures with the same matrix composition as phagolysosomes. In some large crystal deposition structures, central cavitation was observed, which constitutes a typical M-G body. This cavitation occurred both intracellularly and extracellularly. 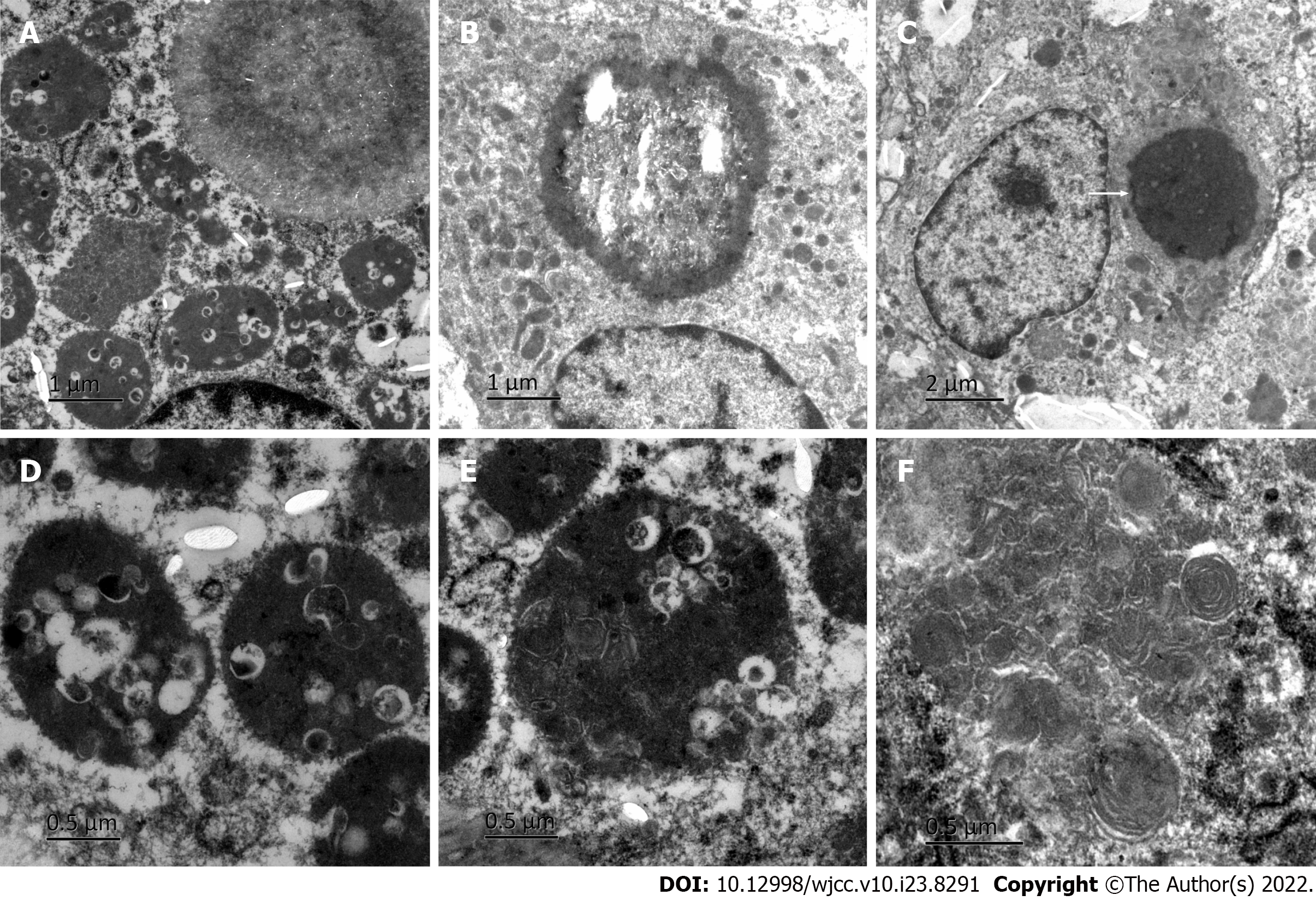 Figure 4 Electron microscopy findings. A: Phagocytic lysosomes in the cytoplasm of macrophages; B: Microbubble; C: A typical Michaelis–Gutman (M-G) body as shown by arrows; D: Large number of bacteria in phagocytic lysosomes; E: Some bacteria were digested and dissolved; F: Myelin figure.

Postoperative anti-infection treatment and an indwelling catheter (7 d) were instituted after recovery. After discharge, the patient continued oral antibiotic treatment and was recommended to undergo routine urine analysis, urine culture, urinary ultrasonography, and cystoscopy every 1-3 mo.

The etiology of bladder malacoplakia remains unclear although its pathogenesis has three main hypotheses. First is bacterial infection, especially Escherichia Coli infection, which has a long-term and repeated history of chronic urinary tract infection. The local microenvironment of the bladder is suitable for bacterial growth and promotes an inflammatory response in the bladder mucosa[7]. Second, patients having immunosuppressive diseases or long-term chronic diseases, such as HIV infection, tuberculosis, sarcoma, diabetes, and ulcerative colitis[8]. Third, the phagocytosis and digestion functions of macrophages is abnormal, and the macrophages of patients can stretch out pseudopodia to phagocytize bacteria. However, due to the decrease in the microfunction of macrophages, it causes defects in lysosomes, and thus loses its bactericidal ability[9].

Malacoplakia has nonspecific clinical symptoms, usually for the corresponding organs, as well as leads to long-term, chronic and repeated inflammation. The imaging manifestations of this disease are also nonspecific, and most of the organs develop tumor-like nodules[10]. Currently, its diagnosis relies only on pathological findings. However, due to the small number of biopsy and puncture tissue submissions, typical pathological features are lacking, and its rarity makes it easy to be missed during diagnosis in daily practice. The typical pathological feature of this disease is the formation of the M-G corpuscle. Many macrophages (Von Hansemann cells) were observed under a microscope, accompanied by several lymphocytes and plasma cells. M-G corpuscles are basophilic and can be seen in the interstitium or cytoplasm of macrophages[11]. They are composed of undigested bacterial cells or iron and calcium deposits that are not completely metabolized after bacterial digestion. The organic matter accounts for approximately 95% of the M-G corpuscles, and its diameter is 5–10 μm[12]. A round or irregular ring structure, forming a single body similar to the 'bird eye' is the specific pathological characteristic of the disease and the most reliable pathological basis for clinical diagnosis. Electron microscopy showed that there was a migration phenomenon between intracellular bacteria and M-G bodies, which also proved that M-G bodies were the products of bacterial degeneration and disintegration in lysosomes[13]. However, not every case showed typical pathological changes in the clinic, and typical M-G bodies were not found. This is because bladder malacoplakia showed three stages of pathological changes: (1) Early inflammatory changes, involving chronic inflammatory changes of the bladder mucosa, which was mostly inflammatory cell infiltration; (2) medium-term typical granulomatous changes, involving M-G bodies and macrophages, and occasionally giant cells and lymphocytes; and (3) the healing stage, wherein fibroblasts and collagen cells were gathered around macrophages, and M-G bodies existed simultaneously. In this case, we also observed this phenomenon, although the pathological stages of the patient differed depending on the location. We speculated that bladder malacoplakia may be a type of tissue cell dysfunction disease, and that the three pathological stages of this disease coexist. Therefore, for early chronic inflammatory changes, a regular review is needed to confirm the diagnosis.

The diagnosis of the disease is mainly based on foamy eosinophilic tissue cells and basophilic M-G bodies. Differential diagnosis includes other granulomas[14], tuberculosis nodules, and primary and metastatic malignant tumors, although there were no basophilic M-G corpuscles seen in these diseases under the microscope.

Due to the rarity of this disease, the current treatment employed is empirical in some cases. There is no multicenter randomized controlled evidence-based medical treatment case report, and the treatment mainly focuses on maintaining the sterility of urine. Formal anti-infection treatment of malacoplakia can often control the disease, but as it progresses, surgical treatment remains necessary. The etiology and histopathology of malacoplakia provide a basis for the use of antibiotics in the treatment of this disease. It has been reported that quinolones, sulfamethoxazole, and rifampicin are effective antibiotics for the condition[15,16]. The duration of medication depends on the follow-up results of the disease, and its combination with surgery can shorten the medication time. Recently, cholinergic drugs and vitamin C have been reported to improve the phagocytic function of macrophages and enhance immune efficacy by affecting the state of oxidative stress, as well as by increasing the cGMP/cAMP ratio. The combination of the two drugs and antibiotics has a certain effect on the treatment of malacoplakia[17,18]. Surgical treatment is necessary when regular drug treatment is ineffective. Continuous postoperative cooperation with anti-infective therapy can improve cure rates. In this case, we simultaneously performed transurethral plasmakinetic resection and plasma coagulation. There was no significant difference between the two methods in the postoperative review (Figure 5), and both achieved curative effects. Accordingly, we speculated that the disease might be a bladder mucosal lesion, which is different from that stated in previous literature. Therefore, we believe that mucosal operation of the disease was sufficient in improving the effectiveness of treatment, as well as in reducing postoperative complications.

Figure 5 Postoperative review. A: Scar in the electrotomy area; B: Electrocoagulation scar.
CONCLUSION

Bladder malacoplakia is a rare chronic granulomatous disease with nonspecific clinical manifestations and a high misdiagnosis rate. Its diagnosis depends on histopathological examination. Long-term oral antibiotics combined with cholinergic drugs or vitamin C can be used as treatments for the condition. If necessary, a better therapeutic effect can be achieved by combining bladder tumor resection or electrocoagulation with medical management.