Malignant pleural mesothelioma has limited therapeutic options and a poor outcome. Antiangiogenic agents might increase the efficacy of immunotherapy as second-line treatment of advanced-stage malignancies.

A patient with stage IIIB pleural mesothelioma received second-line treatment with a combination of pembrolizumab, bevacizumab and chemotherapy following standard chemotherapy under the guidance of second-generation sequencing. He achieved a partial response after four cycles of treatment with progression-free survival of 5 mo. Pembrolizumab was suspended due to grade 2 immunerelated pneumonia, which was resolved by oral glucocorticoids. However, disease progression was observed after immunotherapy rechallenge and anlotinib therapy. The patient had disease progression, multiorgan dysfuntion and died suddenly in October 2019.

Poor prognosis is observed in MPM, partly because of the late-stage diagnosis. The median survival period for untreated MPM is usually < 1 year.

Treatments include palliative surgical resection, radiotherapy or chemotherapy. Currently first-line therapy is chemotherapy with pemetrexed plus cisplatin[5]. No standard second-line therapy is suggested after the initial combined treatment with cisplatin and pemetrexed. Gemcitabine or vinorelbine is often administrated but showed limited efficacy[6]. Immune checkpoint inhibitors (ICIs), such as those targeting programmed cell death-1/programmed death-ligand 1 (PD-1/PD-L1) and cytotoxic T-lymphocyte-associated antigen 4 (CTLA4), have made a breakthrough in the treatment of multiple solid tumors. Compared with the conventional chemotherapeutic drugs, ICIs-based therapy improves the prognosis of patients with various tumors[7]. Recent investigations have suggested that ICIs, pembrolizumab or nivolumab with (or without) ipilimumab, may be useful as a subsequent systemic therapy for patients with MPM[8]. Combinations of antiangiogenic agents with immunotherapy, including ICIs, indicated promising antitumor effects according to laboratory data and clinical analysis, although there are few reports of combinations of antiangiogenic agents with immunotherapy for MPM.

Here, we report a case of MPM who received a second-line treatment of pembrolizumab, bevacizumab and chemotherapy, and achieved a partial response (PR).

A 51-year-old Asian man presented with a fever.

The patient was admitted to our hospital with fever for 3 d in November 2018 (Figure 1).

No significant past medical history was inquiry, including asbestosis.

Physical examination suggested lower breath sounds on the right side.

The tumor cells were arranged in sheets, clusters and pleomorphism. Histopathological diagnosis was MPM (epithelial type) based on a biopsy specimen of the right pleura (Figure 2B). Immunohistochemistry of the tumor tissue indicated positive staining of calretinin, podoplanin, and cytokeratin 7, but negative for carcinoembryonic antigen, thyroid transcription factor-1 and Wilms tumour-1.

MPM (epithelial type), and the clinical stage was determined as cT4N0M0, stage IIIB.

The patient received one cycle of chemotherapy with carboplatin plus pemetrexed. He showed disease progression with a larger lesion in the right pleura and lung metastasis. Second-line treatment with combination of pembrolizumab, bevacizumab and chemotherapy were administered. Four cycles of treatment with pembrolizumab (200 mg, every 3 wk), bevacizumab (600 mg, every 3 wk) and liposome taxol (175 mg/m2, d1) was performed from January to April 2019.

CT examination showed that the pleural lesions and lung metastases had significantly reduced, which was evaluated as PR according to the RECIST1.1 criteria (Figure 3). However, the patient had worsening symptoms including difficulty breathing and cough, with multiple patchy highdensity foci in both lungs, indicating moderate (grade 2) immunerelated pneumonia (IRP). After pembrolizumab treatment suspension, the patient received glucocorticoid (1 mg/kg), followed by two cycles of bevacizumab and chemotherapy. The IRP resolved to grade ≤ 1 and glucocorticoid treatment was discontinued after 2 mo. Unfortunately, CT and magnetic resonance imaging revealed progressive disease with liver metastasis in July 2019. Next-generation sequencing of the whole blood was performed with a gene panel (Yucebio), which showed low tumor mutational burden (< 1 Mut/Mb). As the previous combination therapy had a significantly curative effect, and the pneumonitis resolved, the patient received immunotherapy rechallenge and antiangiogenic agent anlotinib as third-line therapy. However, grade 2 IRP recurred after one cycle of pembrolizumab retreatment. Subsequently, methylprednisolone was administered (1 mg/kg for 1 wk with gradual reduction). Five days later, CT showed IRP remission and the new foci disappeared after 1 mo. However, disease progression recurred in August 2019 with increased liver metastases. We tried capecitabine and temozolomide treatment for one cycle, but failed to control the disease. The patient developed persistent severe pneumonia, anemia, hypoproteinemia, and electrolyte disturbance and died suddenly in October 2019. 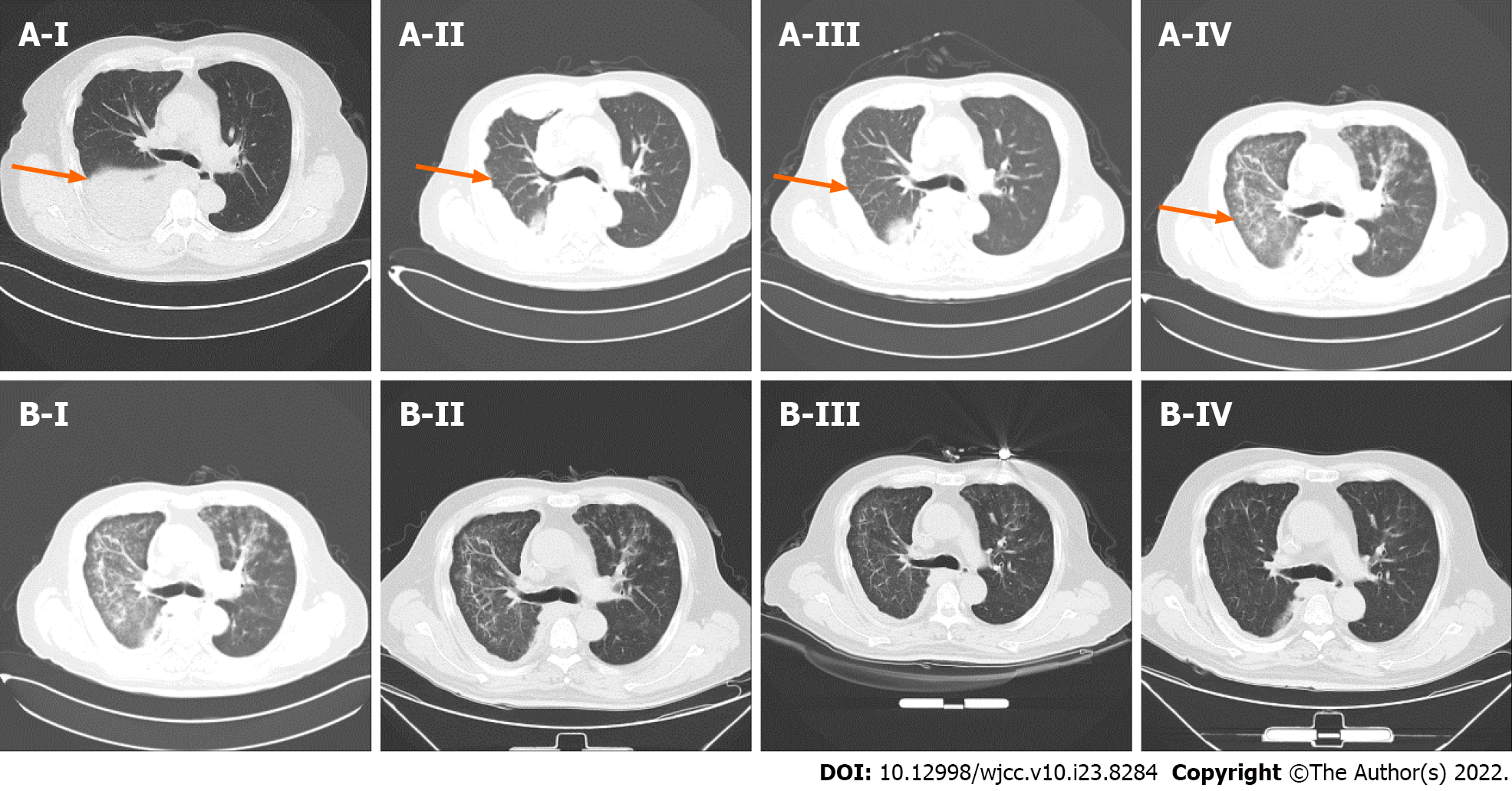 Figure 3 Computed tomography examination. A: Response of the main lesion estimated by computed tomography. The pleural mass significantly progressed after one cycle of carboplatin plus pemetrexed (A-II). Partial response after two (A-III) and four (A-IV) cycles of pembrolizumab and bevacizumab with chemotherapy; B: Image of immunerelated pneumonia (IRP) before and after immunotherapy. B-I: IRP occurred after five cycles of Immune checkpoint inhibitor. B-II: One week after administration of methylprednisolone; B-III: 2 wk after administration of methylprednisolone; B-IV: IRP decreased after 1 mo of methylprednisolone therapy.
DISCUSSION

It has been estimated that age-adjusted mesothelioma death rates expended by 5.37% each year worldwide in the range of 1994 and 2008. USA, Australia, Russia, Western Europe, Turkey, South Africa, and Argentina showed the highest age-standardized incidence according to the 2018 report from World Health Organization[9]. Most mesothelioma patients were treated with palliative chemotherapy rather than surgery, because of the disease progression, old age, poor Eastern Cooperative Oncology Group estimation, or comorbidities. The combination treatment of cisplatin and pemetrexed was used as standard treatment for mesothelioma[10]. Notably, the addition of bevacizumab improved survival compared to those with platinum-doublet therapy alone according to a recent clinical study[11]. However, the median survival for resectable MPM remains at 17-25 mo with aggressive trimodal or bimodal therapy. Median survival for unresectable MPM is 9-12 mo. It is crucial to identify novel targets for MPM treatment.

Immunotherapy achieved great breakthrough during the last decade in the treatment of different tumors, including non-small cell lung cancer (NSCLC), urothelial carcinoma, melanoma and head/neck carcinoma. ICIs reverse the immunosuppression phenotype as activated status in the tumor microenvironment by blocking the PD-1/PD-L1 axis or CTLA4. In a phase 1b trial, 25 patients with PD-L1-positive MPM (positive tumor cells > 1%) revived a second-line treatment of pembrolizumab, which showed an objective response as 20% [95% confidence interval (CI) 6.8%-40.7%] and stable disease in 52% of the patients. The median duration of response was calculated as 12 mo (3.7 mo to not reached), and the treatment was judged as well tolerated[12]. Results of the MAPS-2 trial supported either nivolumab or nivolumab plus ipilimumab as options for second-line or third-line therapy in patients with relapsed MPM, which was recommend by the National Comprehensive Cancer Network panel[13].

Although ICIassociated adverse events are less common than those associated with chemotherapy, they necessitate corticosteroid treatment, leading to ICI treatment interruption[16,17]. Most immune-related adverse events (irAEs) was observed in the colon, liver, lungs, pituitary gland, thyroid, and skin. The other uncommon adverse events occurred in the heart, nervous system, and other organs[18]. Most symptom was rapid alleviated after ICI treatment interruption and corticosteroid treatment. Thus, ICIs rechallenge appears as a conceivable option after temporary interruption, but only limited reports are available for ICI rechallenge after irAE occurred. The identical irAE recurrence rate in ICI rechallenge was reported as ranging from 18% to 42% in a recent small cohort study[19-21]. Dolladille et al[22] analyzed 24079 irAEs associated with ICI treatment. Among the 6123 irAEs, 452 were correlated with ICI rechallenges (7.4%). Totally 130 recurrences (28.8%; 95%CI, 24.8%-33.1%) of the initial irAE were calculated. Screening for appropriate patients for ICI rechallenge should be considered, as well as closely monitoring irAEs during the process of the treatment. A previous study reported that poor clinical outcomes associated with pneumonitis were more frequent in current smokers and those with underlying lung conditions[23]. Our patient was rechallenged with immunotherapy after ICI interruption because of IRP and received corticosteroid treatment. Therefore, ICI rechallenge should be carefully considered when IRP has occurred previously in patients with advanced MPM treated with pembrolizumab.

ICIs have substantially improved clinical outcomes in many types of cancer. However, the benefits of ICIs as second-line therapy of MPM are still unclear. This case represents a PR with pembrolizumab, bevacizumab and chemotherapy in a patient with MPM but he failed to achieve a durable clinical benefit on rechallenge. Serial biopsies demonstrated the primary immune activation and rapid immune exhaustion in the tumor microenvironment. Future studies are needed for the drug combinations to overcome ICI resistance and adverse reaction prediction for rechallenge.