We report a 30-year-old man who was admitted to our hospital because of pale yellow urine and skin with a simultaneous decrease in peripheral blood ternary cells. We made a diagnosis of EBV-associated HAAA. The treatment strategy for this patient included eltrombopag, an immunosuppressive regimen of rabbit anti-human thymocyte immunoglobulin, cyclosporine, and supportive care. The patient was discharged in normal physical condition after five months. A hemogram performed on follow-up revealed that he had achieved a complete response.

Eltrombopag plus anti-thymocyte globubin and cyclosporine may be a therapeutic option for EBV-associated HAAA.Larger studies are warranted to confirm.

Core tip: We found an unexpected association between Epstein–Barr virus (EBV) and hepatitis-associated aplastic anemia (HAAA). Reports on EBV-associated HAAA are sparse. HAAA is a type of severe AA, and the treatment strategy pursued was in accordance with the 2016 British guidelines for AA. The patient achieved a complete response after immunosuppressive therapy. This current study highlights the importance of early diagnosis and timely therapy for EBV-associated HAAA.

Hepatitis-associated aplastic anemia (HAAA) was first reported by Lorenz and Quaiser in 1955[1]. This subtype of AA results in bone marrow failure because of the progression of hepatitis and usually appears 2–3 mo after an acute attack[2]. In most cases, HAAA is fulminant and usually lethal if left untreated[3,4]. Furthermore, it is most commonly caused by non-A, non-B, and non-C hepatitis, such as those due to Epstein–Barr virus (EBV), cytomegalovirus (CMV), human immunodeficiency virus, and parvovirus B19[4,5]. Specific viruses are not detected in most HAAA cases; however, studies have shown that the destruction of hematopoietic stem cells caused by abnormal T lymphocyte immunity is a potential pathogenic mechanism for HAAA[3]. In the current study, we report a case of a patient with EBV-associated HAAA who received antithymocyte globulin (ATG), cyclosporine (CsA), and eltrombopag. Effective recovery was observed after the treatment.

A 30-year-old man was admitted to our hospital because of pale yellow urine and skin for approximately 2 mo with a simultaneous decrease in peripheral blood ternary cells for nearly 1 mo.

In August 2019, a routine blood examination revealed thrombocytopenia; however, it was ignored. On 16 August 2019, he developed fever and scattered hemorrhagic points on the skin all over his body. A routine blood examination showed a decrease in peripheral blood ternary cells, and a routine bone marrow examination indicated a hyperplastic marrow with active granulocytes and erythrocytes. The distribution of megakaryocytes was reduced, and platelets were scattered. On 3 September 2019, he was transferred to the hematology department of our hospital for further treatment.

The patient had no specific personal or family history.

His temperature was 38.5°C. The patient had anemia and scattered hemorrhagic spots on the skin all over his body. There was no yellow staining of the sclera, and the liver and spleen were not palpable under ribs. 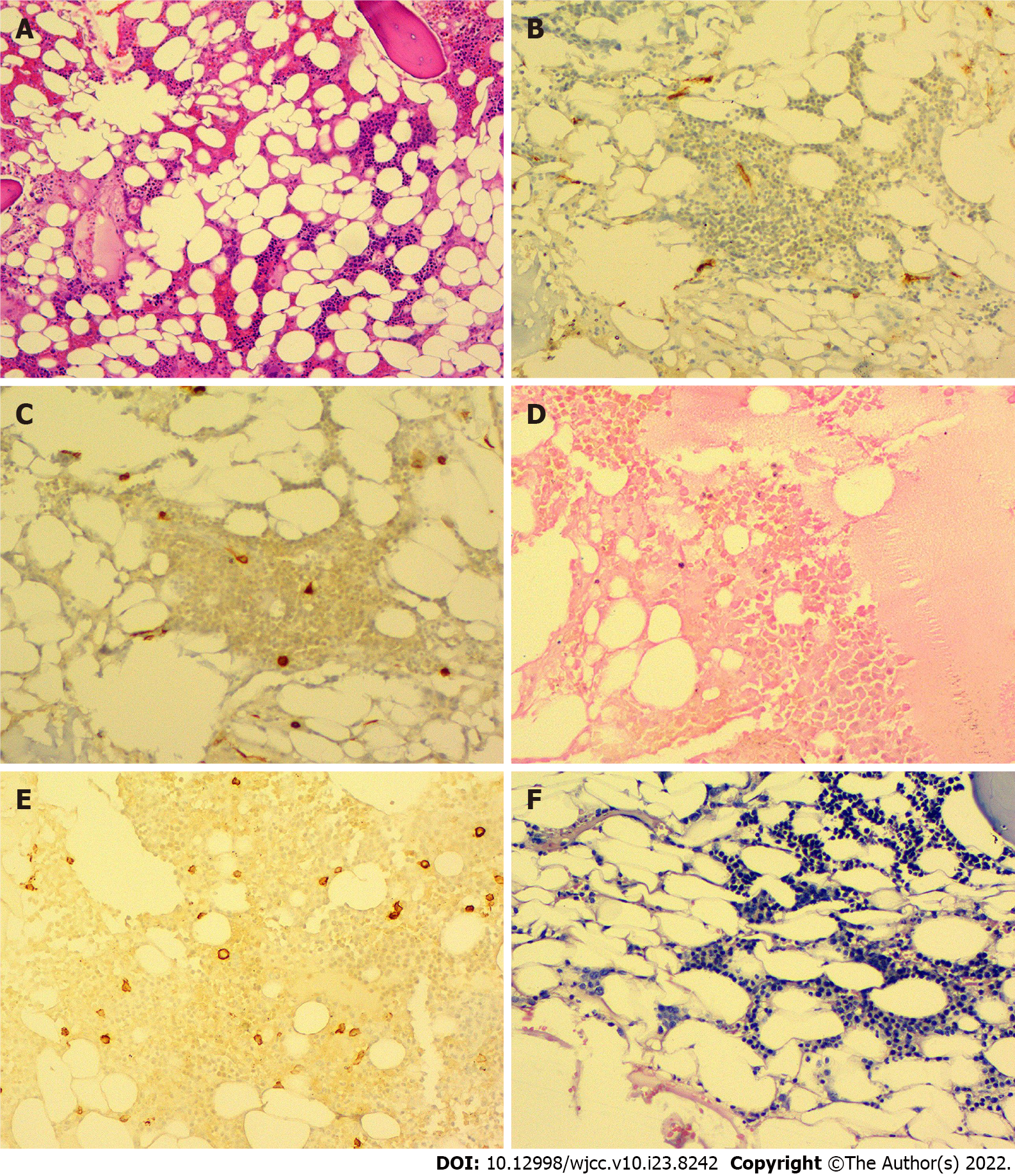 The patient was diagnosed with HAAA and EBV infection.

The patient received symptomatic treatment for liver protection, granulocyte colony-stimulating factor, and blood transfusion. On 21 September 2019, he was treated with rabbit ATG (d1–d2: 225 mg/d; d3–d5: 250 mg/d), 100 mg CsA twice daily, 50 mg eltrombopag twice daily, and cord blood. On 8 October 2019, the CMV-DNA count was 2.53 × 103 copies/mL, and gammaglobulin was administered. The EBV-DNA copy number continued to increase during treatment and reached 3.08 × 105 copies/mL on 4 November 2019 with 3.34 × 103 copies/mL of CMV DNA. CsA administration was then stopped. Thereafter, the EBV-DNA copy number showed a decreasing trend but remained high, and the test for CMV DNA became negative. On 3 December 2019, he received anti-EBV therapy with 700 mg (375 mg/m2) rituximab. During regular follow-up after treatment, tests for both EBV DNA and CMV DNA were negative, and CsA was administered again on 25 December 2019. During another follow-up, liver enzymes and bilirubin levels gradually decreased to normal levels.

After immunosuppressive therapy, transfusion was gradually terminated, and the patient’s condition progressively improved. A bone marrow morphology test was performed again (Figures 2C–F), and the results of the complete blood count changed as the treatment progressed (Figure 3). At the follow-up, the patient’s hemogram revealed that he achieved a complete response and returned to normal. On 30 September 2021, a routine blood test showed a WBC count of 7600 cells/mm3, ANC of 2400 cells/mm3, hemoglobin level of 11.6 g/dL, platelet count of 187 × 109/L, and Ret% of 1.07%. 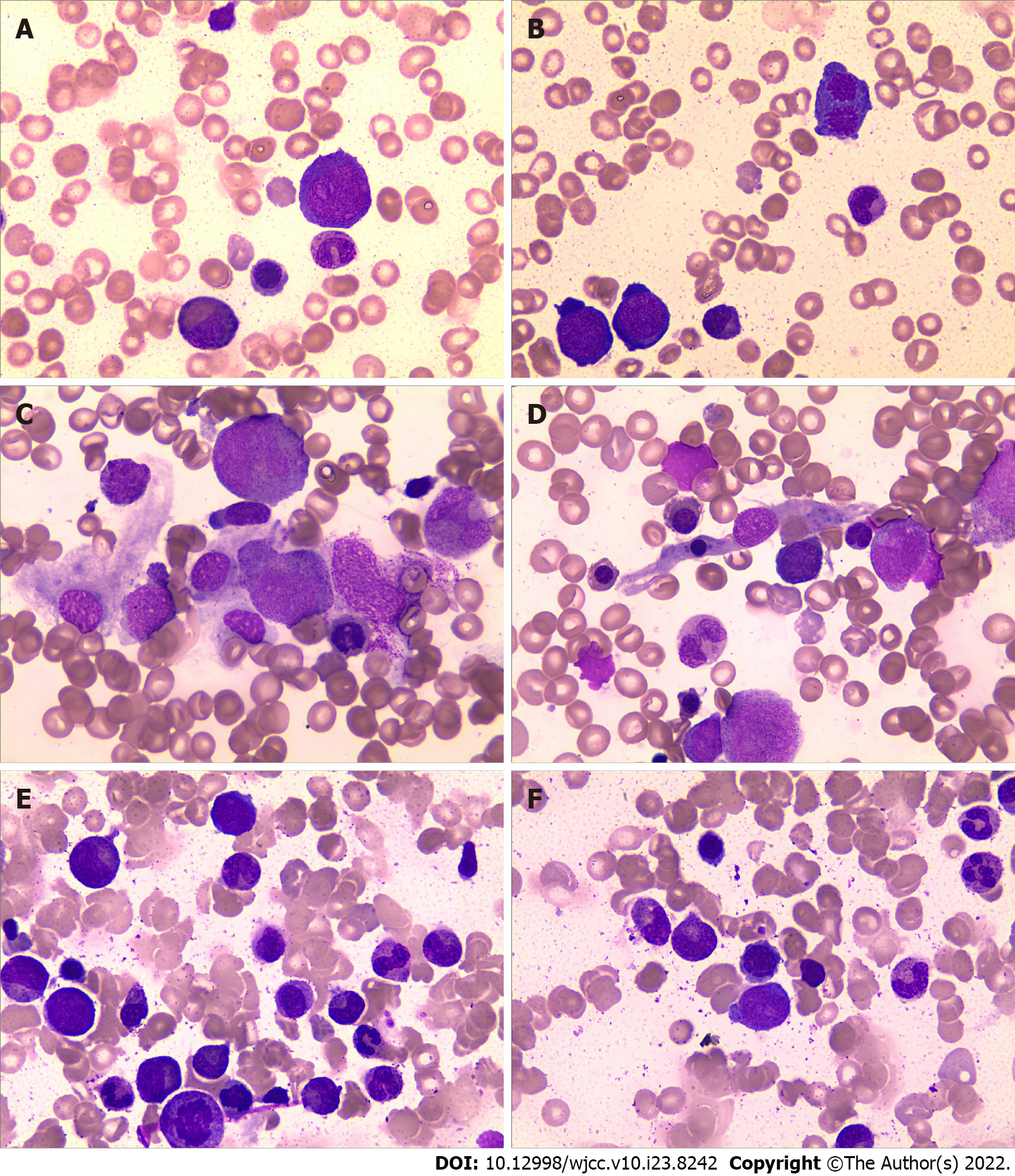 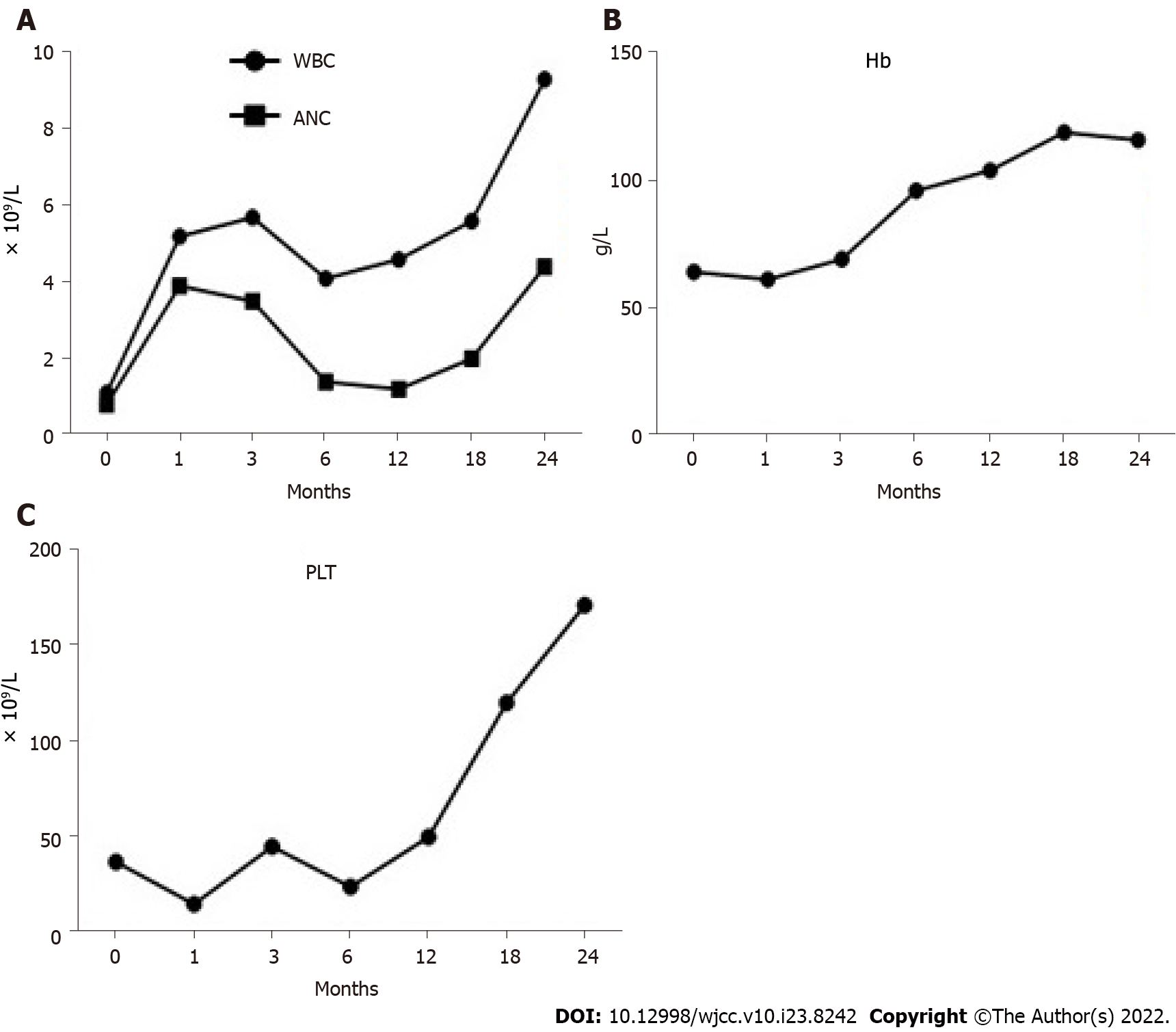 Liver injury due to EBV infection is common, with 80%–90% of patients exhibiting mild to moderate transient liver function abnormalities. Although it is a self-limiting disease with a good prognosis, it affects the hematological system and can cause hematopoietic dysfunction in the bone marrow, which eventually manifests as AA [6,7]. In the current study, the EBV-DNA load in the peripheral blood increased during treatment, and liver biopsy indicated hepatitis. However, tests for hepatitis and other common viruses were negative. The patient was definitively diagnosed with HAAA by peripheral blood and liver enzyme tests, bone marrow biopsy, and other related assessments. It was speculated that the patient might have suffered liver and bone marrow damage because of his persistently high EBV copy number.

The pathogenesis of HAAA is complex. HAAA patients have a decreased CD4+/CD8+ lymphocyte ratio and a high proportion of CD8+ lymphocytes, which can produce cytotoxicity and inhibit bone marrow hematopoiesis[8]. Worth et al[9] found that hepatitis-related symptoms and manifestations after EBV infection were more closely related to CD8+ and CD4+ lymphocyte proliferation than to EBV-DNA load. In our case, the detection of T lymphocyte subsets in the peripheral blood showed that CD4+ lymphocytes and the ratio of CD4+/CD8+ decreased, but CD8+ cells increased; this finding was consistent with those of previous studies[10,11]. The imbalance in the proportion of T cells leads to the enhancement of immunosuppression, which is conducive to virus replication and ultimately prevents the effective elimination of the virus. Therefore, it is speculated that the patient may have had HAAA because of abnormal T cell functioning and an immune disorder caused by EBV infection. In this case, EBV may not have been detected in the liver tissue because of the difference in detection concentrations between the peripheral blood and tissue or because the liver biopsy of the patient did not puncture the tissue site infected with EBV. Eventually, the immune disorder caused by EBV-DNA replication and liver damage led to HAAA.

HAAA is a type of severe aplastic anemia (SAA) that is characterized by high mortality and rapid progression, thus necessitating early diagnosis and treatment. Guidelines for SAA patients with a matched sibling donor recommend early hematopoietic stem cell transplantation[12]. In the current study, the patient was treated with eltrombopag and an immunosuppressive regimen of rabbit ATG and CsA to achieve a complete response. Eltrombopag is a low-molecular-weight, synthetic, nonpeptide, oral thrombopoietin receptor agonist approved by the US Food and Drug Administration in 2008 for the treatment of patients with SAA with poor response to immunosuppressive therapy[13]. Schifferli et al[14] suggested that eltrombopag might improve the hematopoietic microenvironment and promote hematopoiesis by increasing regulatory T and B cells, secreting transforming growth factor-β, impeding dendritic cell differentiation, and reducing the release of interferon-γ and tumor necrosis factor .

Previous studies have shown that the use of eltrombopag in AA did not show a significant elevation in abnormal cell clones compared with the use of IST alone[15]. Townsley et al[16] showed that the early combination of immunosuppressive therapy with eltrombopag significantly improved the overall serological response rate, hematological complete response rate, and timely rescue and expansion of residual HSPCs in SAA patients, thus accelerating the speed and quality of hematopoietic recovery.

The patient was critically ill and received eltrombopag with ATG and CsA, which led to a favorable result. It can be speculated that earlier treatment with eltrombopag leads to a better outcome. However, the optimal timing of eltrombopag for SAA with IST requires further confirmation in studies with large sample sizes.