Pulmonary Langerhans cell histiocytosis (PLCH) is a rare cystic lung disease usually affecting young adults. It is predicted that PLCH is a lung tumor precursor associated with dysfunction of the myeloid dendritic cells in the lung.

Core Tip: The BRAF mutation is associated with a number of tumors, it is thought that Pulmonary Langerhans cell histiocytosis (PLCH) may be a precursor of malignancy. In this case, the diagnosis of PLCH concurrently with the diagnosis of lung squamous cell carcinoma and the detection of BRAF mutation supported this hypothesis.

Pulmonary Langerhans cell histiocytosis (PLCH) is a rare cystic interstitial lung disease usually affecting young adults and is a type of Langerhans cell histiocytosis (LCH) disease group[1]. It is the type which remains isolated in the lung, and rarely shows a progressive course[2]. Although its incidence and prevalence are not exactly known, it constitutes 3%-5% of cases of diffuse lung diseases, and smoking is considered a predisposing factor[3,4].

PLCH is considered an inflammatory myeloid neoplasm based on the presence of somatic oncogenic mutations in pulmonary CD1a dendritic cells[5]. Three known factors play a role in its pathophysiology: (1) BRAF V600E and the mitogen-activated protein kinase (MAPK) 2K1 somatic mutations in MAPK pathway; (2) Smoking; and (3) Dysfunction of the myeloid dendritic cells[6,7].

In this report, a patient with a concurrent diagnosis of PLCH and squamous cell carcinoma was presented.

A seventy-year-old male patient presented with a history of intermittent cough, white sputum, and shortness of breath triggered by exercise (modified Medical Research Council 3), and was admitted to the outpatient clinic.

Intermittent cough and white sputum for a period of 5 years, and shortness of for 3 years. He had taken sulbactam ampicillin 2 × 440/294 mg for 14 d and gemifloxacin for 7 d and had consulted a physician twice during the previous 2 mo because of recurrent complaints.

The patient had a medical history of hypertension and diabetes mellitus for 15 years and coronary artery disease for 4 years.

He was a current smoker who smoked 60 packs of cigarettes/year. His father had a diagnosis of lung cancer.

Lung examination findings included a prolonged bilateral expiratory phase, while physical examinations of his other systems were found to be within normal limits. His body temperature was 36.9 °C, pulse rate 86 bpm at rest, blood pressure 130/85 mmHg, respiratory rate 18/min, and oxygen saturation 98% while the patient was breathing room air.

Laboratory examination revealed that his hemoglobin level stood at 12 g/dL and his hematocrit level was 35.4%, indicating mild anemia. The pulmonary function test revealed that the forced expiratory volume in the first second (FEV1) was 3060 mL (103%), forced vital capacity (FVC) was 4130 mL (107%), and the FEV1/FVC ratio was 74%. The patient’s shortness of breath triggered by exercise was interpreted as secondary to his chronic diseases. Gram staining of the sputum sample showed many epithelial cells and a small amount of leukocytes. The Genexpert tuberculosis-polymerase chain reaction (PCR) test could not be performed due to technical reasons. Acid-fast staining of the sputum yielded negative results three separate times. There was no growth in the culture of bacteria including of tuberculosis, bacillus, or fungi. 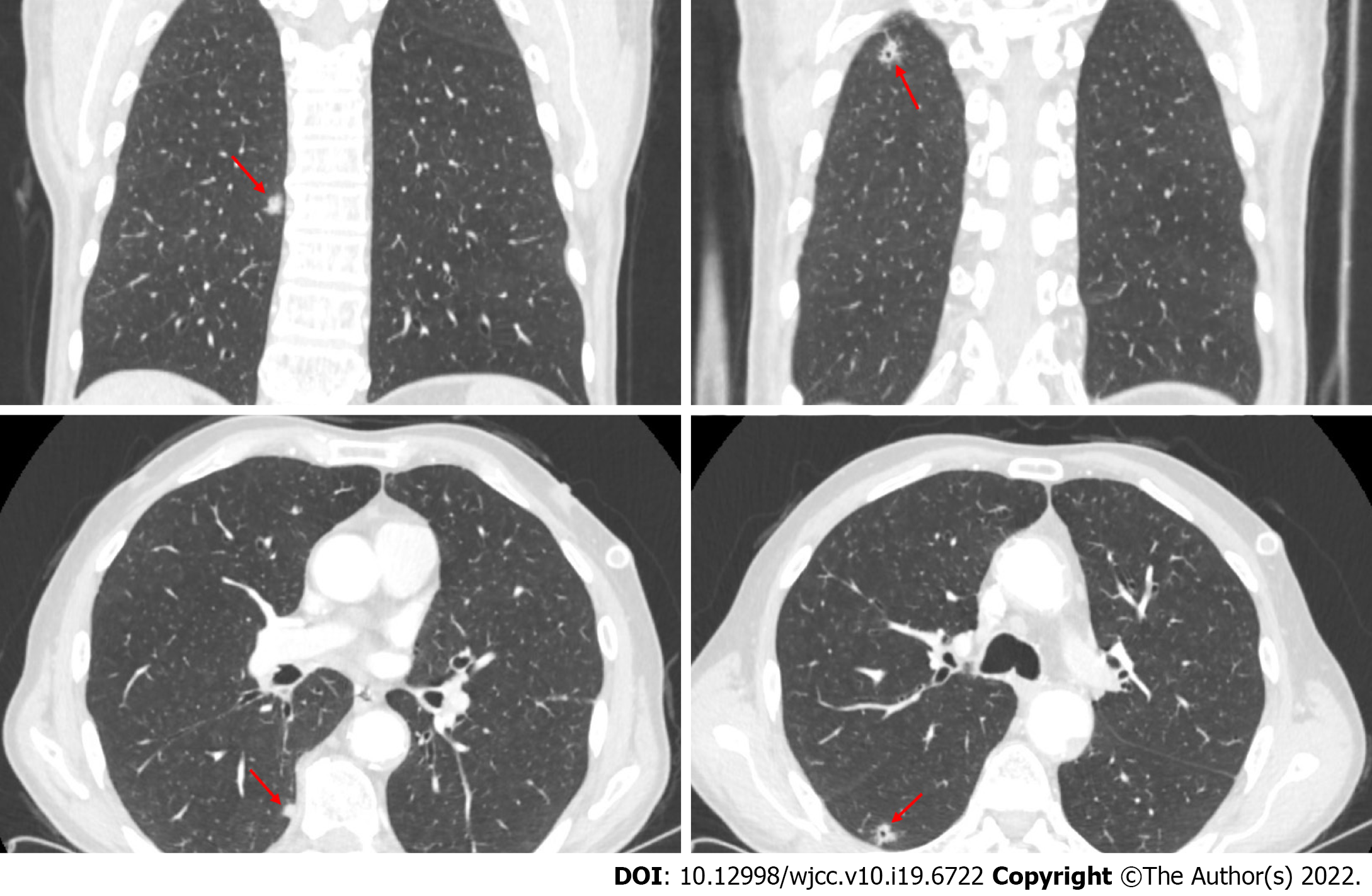 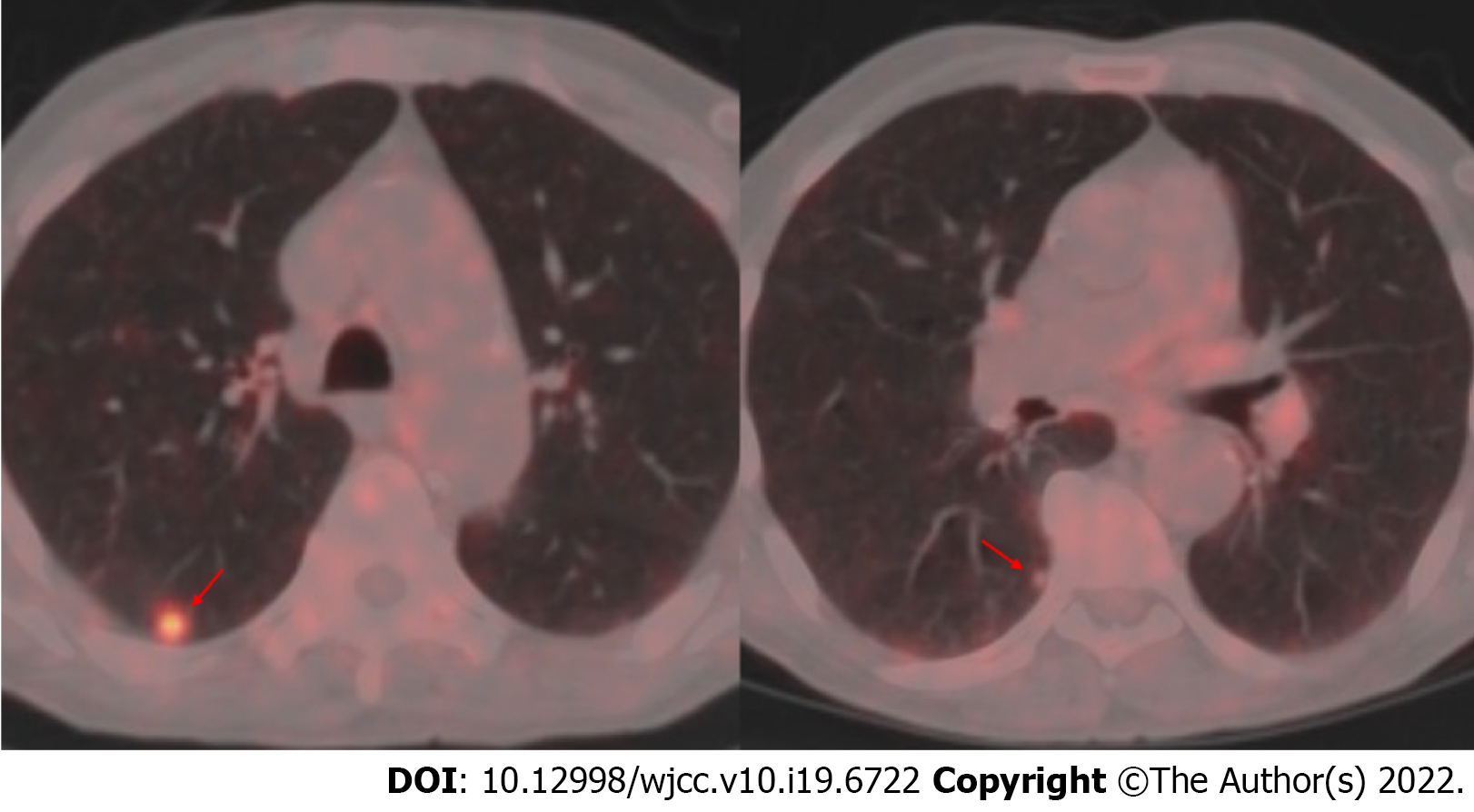 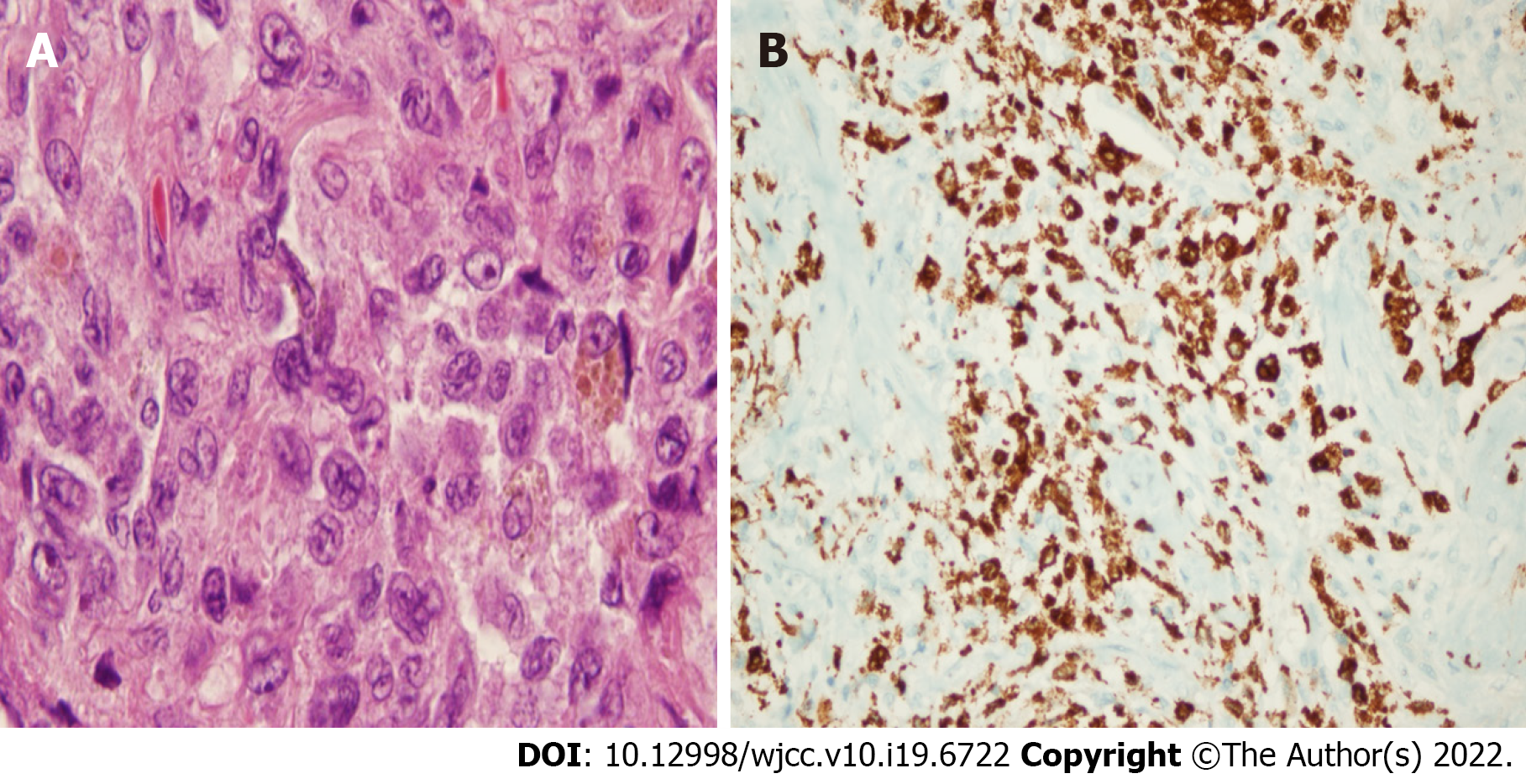 A single-incision video thoracoscopic wedge resection of the right lower lobe superior was performed while posterior basal segments were performed under general anesthesia.

The patient was informed of his disease, the importance of quitting smoking was emphasized, he was given support to quit. He was called for follow-up in terms of clinical and respiratory functions 6 mo later.

A case was presented herein which was found to feature both squamous cell carcinoma and LCH in the right lower lobe, simultaneously. LCH is an idiopathic neoplasm of myeloid dendritic cells[8]. It comes in two clinical forms: the first type is seen in children and has a localized or systemic course and has been described in many terms over the years[7]. In 1953, Lichtenstein first described it as Histiocytosis X, and then according to the organs involved, it was named as the eosinophilic granuloma or Hand-Schüller-Christian disease or Letterer-Siwe disease[7].

Another clinical form of LCH is PLCH, seen in young adults with a history of smoking. It is an interstitial lung disease of unknown etiology, characterized by focal infiltration of Langerhans cells and exhibiting unpredictable biologic behavior[9]. It constitutes 3%-5% of diffuse parenchymal lung diseases, but its exact prevalence is not known since most of the patients are asymptomatic[9]. Probably attributable to the fact that the disease remains localized in the lungs and rarely has a progressive course ensuring that it has the best prognosis in the LCH group[10].

Dysfunction of the myeloid dendritic cells is well defined in PLCH[8]. Somatic mutations in CD1a dendritic cells and MAPK pathway, especially BRAF and MAP2K1, have been identified as having a key role in the pathogenetic mechanism of this disease by activation of this pathway[5]. The BRAF V600E mutation was first described in LCH cases in 2010[11]. Since the BRAF mutation is associated with a number of tumors, it is thought that PLCH may be a precursor of malignancy[12]. In the current case, the diagnosis of PLCH concurrently with the diagnosis of lung squamous cell carcinoma and the detection of BRAF mutation supported this hypothesis.

BRAF V600E mutation was detected in 2 of 5 patients diagnosed with PLCH with bilateral pulmonary nodules[2]. It has been emphasized that BRAF V600E mutation acts as a driver mutation for neoplastic transformation in malignant melanoma, lung, thyroid, and colonic adenocarcinomas. As in other histiocytic dendritic disorders, targeted therapies can be used through progressive cases of PLCH featuring BRAF V600E mutation[2].

Based on the occurrence of BRAF mutations in non-small cell lung cancers and the definition of targeted therapies, in the study conducted by Paik et al[14] on 697 patients with lung adenocarcinoma, BRAF V600E mutations were detected in 50%, G469A in 39%, and D594G mutations in 11% of the patients. It was emphasized that the BRAF mutation was found in 3% of the patients with lung adenocarcinoma and was generally detected in smokers. In the case herein, the BRAF V600E mutation was found in the patient, who also received a concurrent diagnosis of squamous cell carcinoma and PLCH.

The presence of somatic oncogenic mutations such as BRAF in patients diagnosed with PLCH suggests that PLCH may be a precursor to malignancy. Periodic follow-up, preferably with low-dose chest CT and encouragement of smoking cessation, is recommended in patients with PLCH.