Cryptococcal osteomyelitis is a bone infection caused by cryptococcus. As an opportunistic infection, bone cryptococcosis usually occurs in patients with immunodeficiency diseases or in those undergoing immunosuppressive therapy and often displays characteristics of disseminated disease. Isolated cryptococcal osteomyelitis is extremely unusual in immunocompetent person. The pathogenic fungus often invades vertebrae, femur, tibia, rib, clavicle, pelvis, and humerus, but the ulna is a rare target.

A 79-year-old woman complaining of chronic pain, skin ulceration and a sinus on her right forearm was admitted, and soon after was diagnosed with cryptococcal osteomyelitis in the right ulna. Unexpectedly, she was also found to have apparently normal immunity. After treatment with antifungal therapy combined with surgery debridement, the patient’s osteomyelitis healed with a satisfactory outcome.

Although rare, cryptococcal osteomyelitis should be considered in the differential diagnosis of osteolytic lesions even in immunocompetent patients, and good outcomes can be expected if early definitive diagnosis and etiological treatment are established.

A 79-year-old woman presented with a 2-mo history of pain and a 1-mo history of skin ulceration on her right forearm. The pain was exacerbated by limb movement.

Two months previously, the patient attended a local hospital and underwent X-rays which showed osteolytic lesions involving the mid-lower part of the right ulna with an internal fixation device for an olecranon fracture that had healed. The patient did not receive any specific treatment. One month ago, a skin ulcer appeared with purulent exudation, which was about the size of a soybean. The patient was referred to our hospital for further treatment.

Two years ago, she underwent surgery due to a fracture of the right ulna olecranon in a local hospital, soon after the wound healed well and limb function recovered to nearly normal level until onset of the present disease.

The patient was a farmer with normal physique. Her medical history showed no immune abnormalities or long-term use of steroids. She also denied personal and family history of hepatitis B, tuberculosis or acquired immune deficiency syndrome, diabetes or hypertension, respiratory, cardiovascular or neuropsychiatric diseases.

The patient’s vital signs were normal and stable. No abnormalities in the lung or central nervous system were found on physical examination. At the mid-lower part of the right forearm a 3 cm × 2 cm chronic wound was observed with granulation tissue and purulent discharge, and a sinus deep into the bony surface of the ulna was noted (Figure 1). 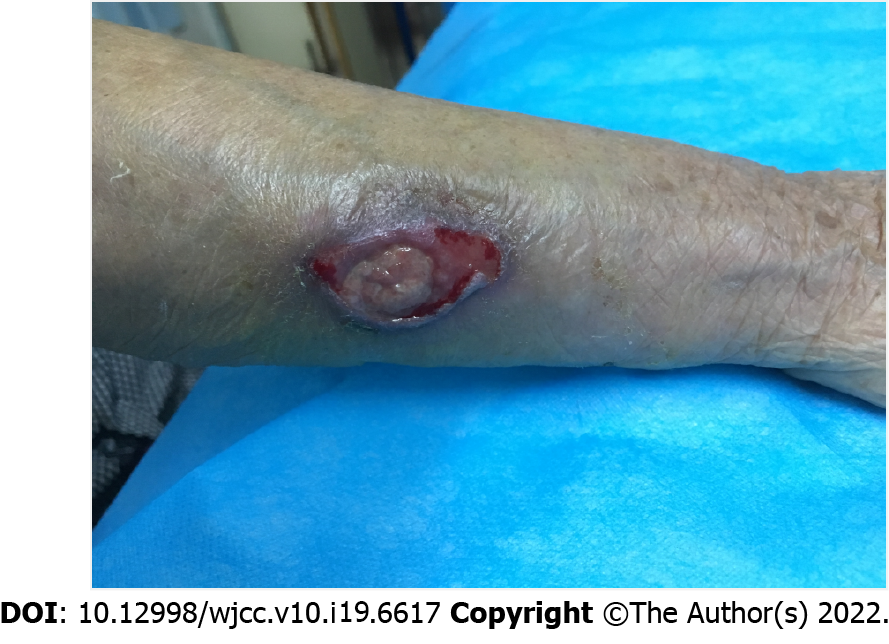 Figure 1 Preoperative clinical photograph of wound ulceration 3 cm × 2 cm in size on the dorsal ulnar aspect of the mid-distal third of right forearm. The wound partially coated with purulent matter and communicated with the ulnar bone.
Laboratory examinations

The patient’s chest X-ray was normal. Radiographs of the right forearm revealed multiple irregular and different sized osteolytic lesions with little periosteal reaction around the diaphyseal bone at the mid-distal shaft of the ulna; however, the internal fixation of the proximal segment of the ulna showed no signs of loosening (Figure 2A and B). A computed tomography (CT) scan demonstrated the largest osteolytic lesion in the mid-distal portion of the right ulna, measuring 2.9 cm × 1.2 cm × 4.2 cm (Figure 3A-C). 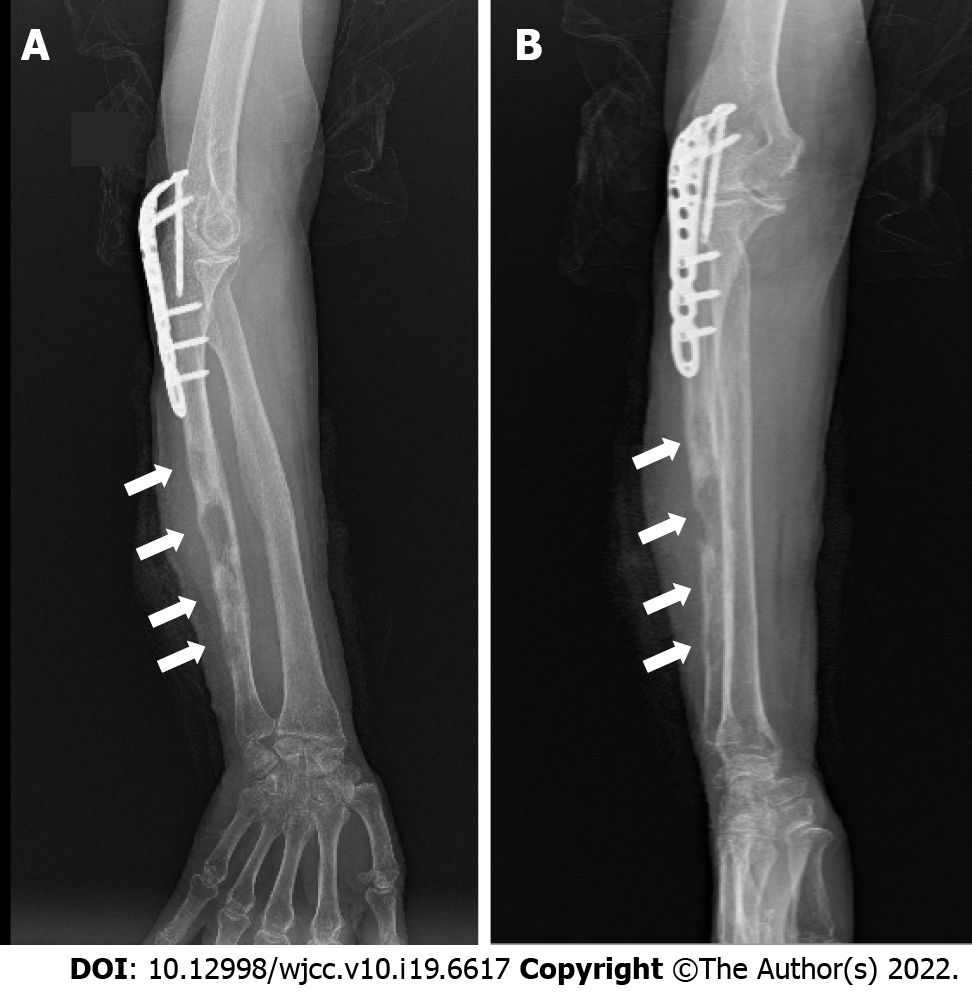 Figure 2 Preoperative X-ray. A: Anteroposterior film; B: Lateral film. A and B showed multiple irregular low-density osteolytic lesions (white arrows) with little periosteal reaction in the diaphyseal bone at the mid-distal shaft of the ulna, with a swollen soft tissue shadow, the internal fixation of the proximal ulna no loosening. 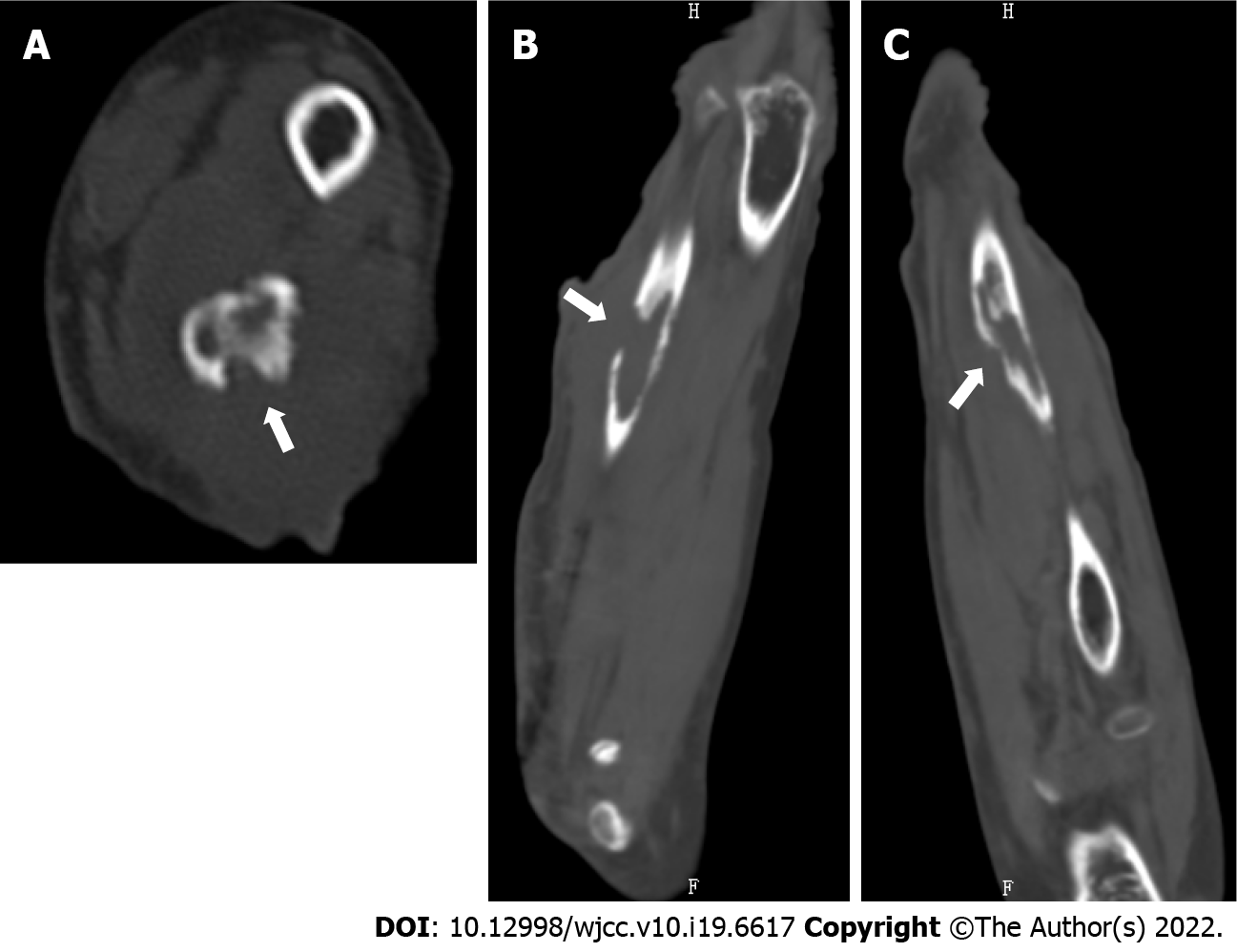 Pyogenic osteomyelitis was initially diagnosed given the findings on physical examination, laboratory investigations, and radiographs. The purulent exudate from the wound sinus was obtained for microscopy (Gram stain), bacterial and fungal culture, and antibiotic sensitivity. The results demonstrated growing yeast which was identified as cryptococcus neoformans. Multidisciplinary expert consultation excluded concomitant infection in the lung or central nervous system due to no associated symptoms and signs.

The diagnosis of cryptococcal osteomyelitis of the right ulna was finally determined based on the clinical manifestations, imaging findings, etiology, and histopathology.

According to culture and drug sensitivity results, the patient was immediately treated with fluconazole 200 mg intravenously (IV) twice a day. Surgical debridement was also performed, pus and infected tissues were also collected for further culture and drug sensitivity, and necrotic bone, sinus, and inflammatory granulation tissues were completely removed for histopathology analysis. The wound was irrigated with normal saline, hydrogen peroxide and iodophor (Figure 4), and the bone defect space was filled with an appropriate amount of bone cement mixed with 80 mg of gentamycin and 25 mg of amphotericin B, then closed with one-stage suturing. The second culture confirmed the pathogen was cryptococcus neoformans. Histopathology supported chronic osteomyelitis (Figure 5). The patient was treated with fluconazole 200 mg IV twice a day for 3 d after surgery. On the 4th day, antifungal treatment was shifted to voriconazole 200 mg IV twice a day given the outcome of minimum inhibitory concentrations (4 for fluconazole vs ≤ 0.125 for voriconazole) from the second culture and sensitivity analysis. 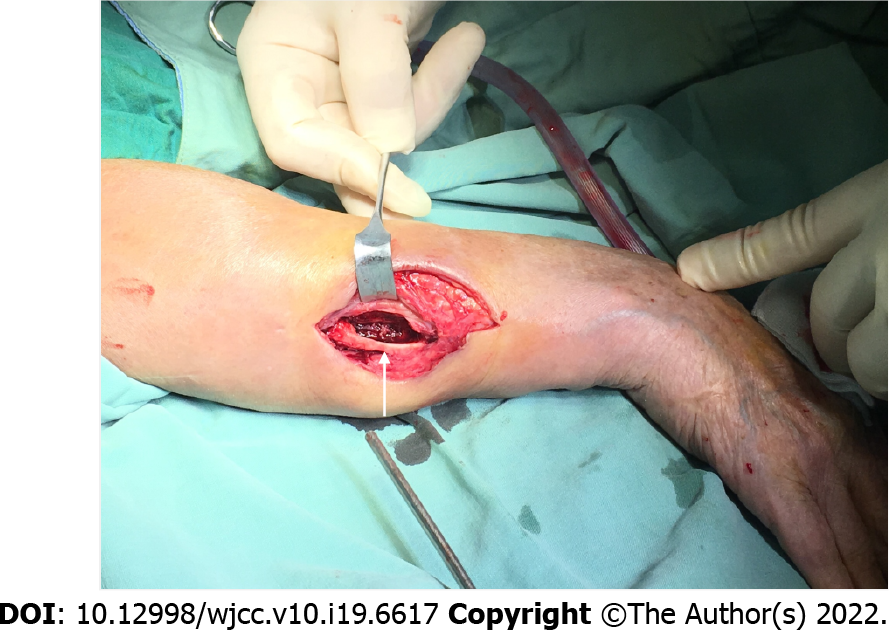 Figure 4 The wound was surgically debrided and irrigated, leaving a bony defect (white arrows) in the right ulna which was filled with amphotericin B-loaded cement. 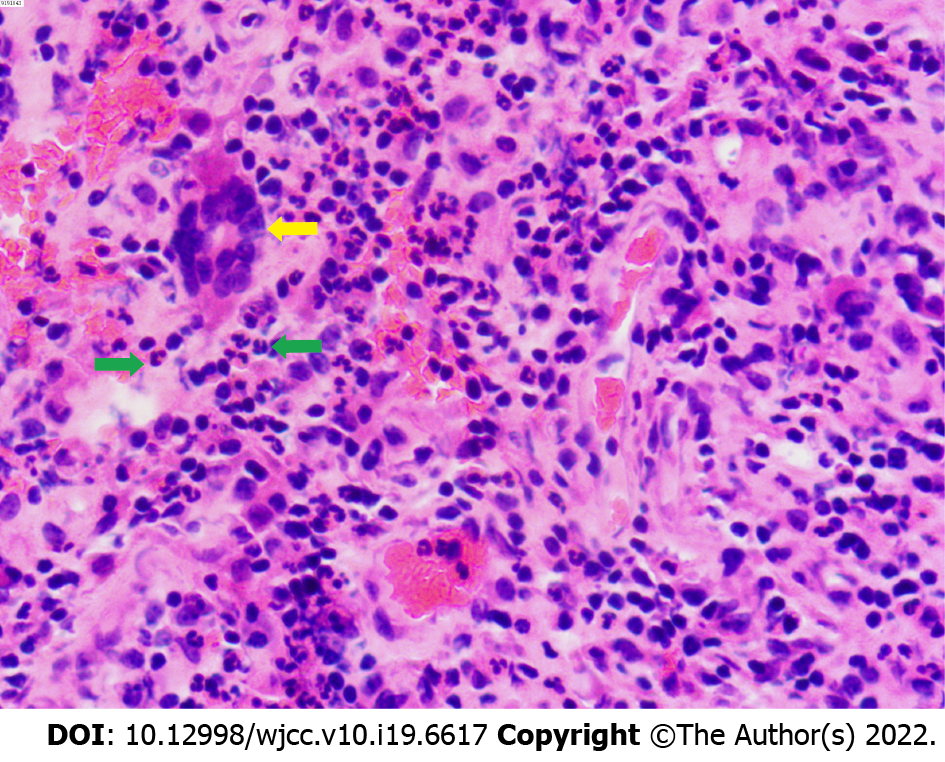 Postoperatively, the patient’s temperature was normal. Wound drainage was sampled again for culture which was later reported to be negative. An X-ray after surgery showed that the defect area of the right ulna was filled with amphotericin B-loaded cement (Figure 6A and B). On the 6th day after surgery, the patient was discharged with voriconazole 200 mg orally twice a day. One months later, in consideration of the patient’s economic condition the antifungal was switched to fluconazole 400 mg orally once a day due to decreased values of blood inflammatory markers. 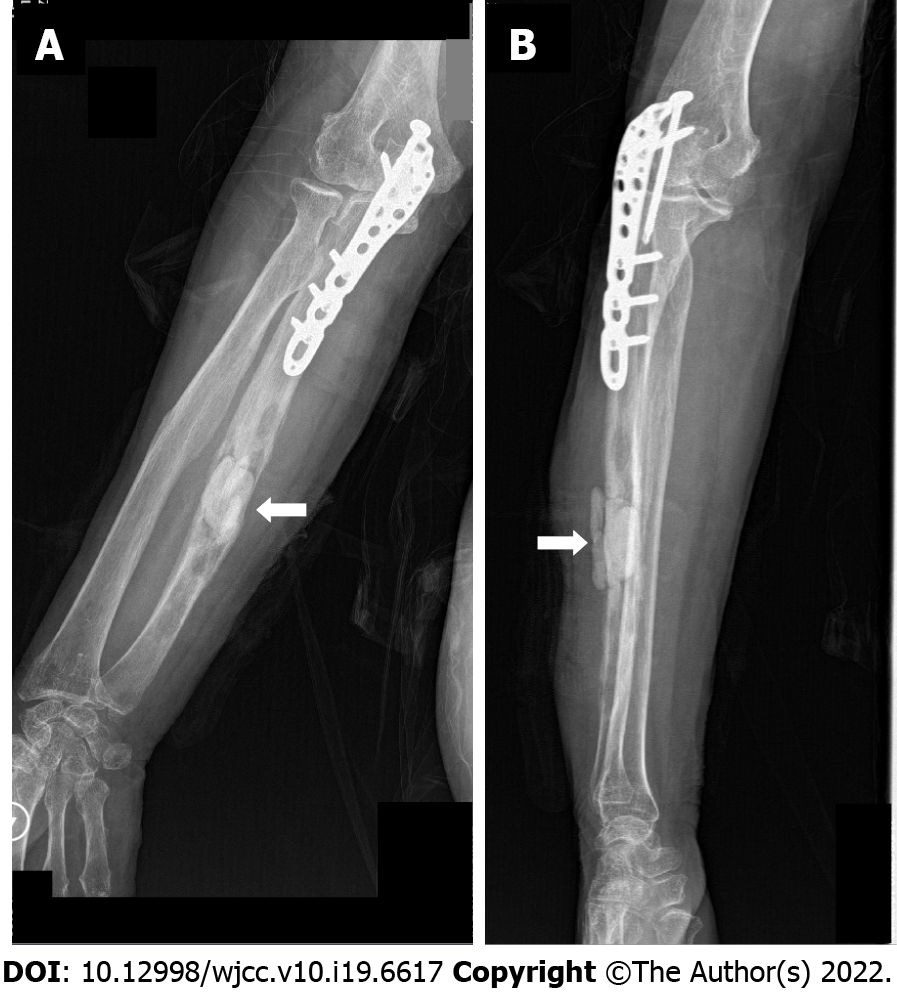 Figure 6 Postoperative X ray. A: Anteroposterior film; B: Lateral film. A and B showed that the amphotericin B-loaded cement filled the defect area (white arrow) of the right ulna after surgical debridement.
OUTCOME AND FOLLOW-UP 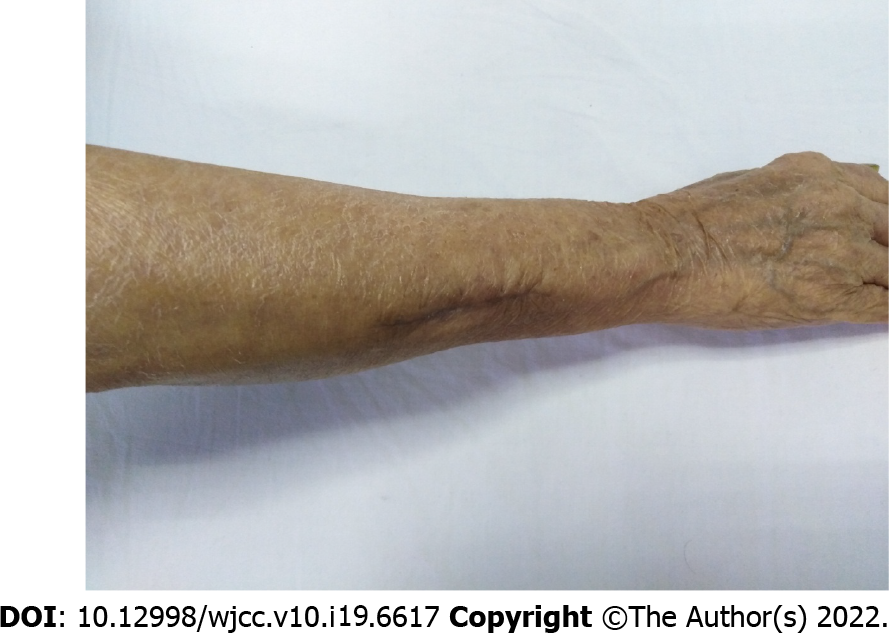 Figure 7 The wound had healed well 3 mo after surgery. 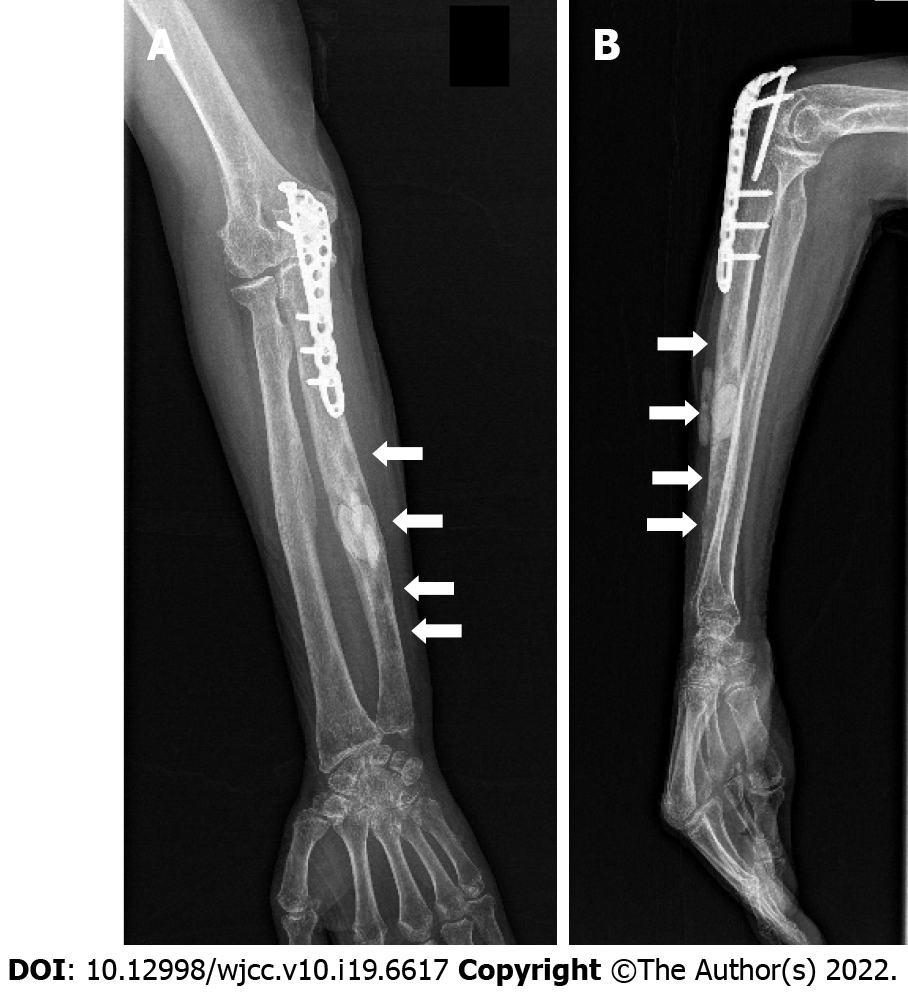 Figure 8 X ray. A: Anteroposterior film; B: Lateral film. Three months after surgery showed that the osteolytic lesions (white arrows) had shrunk and blurred (except the bone cement filled lesion) in the right ulna. 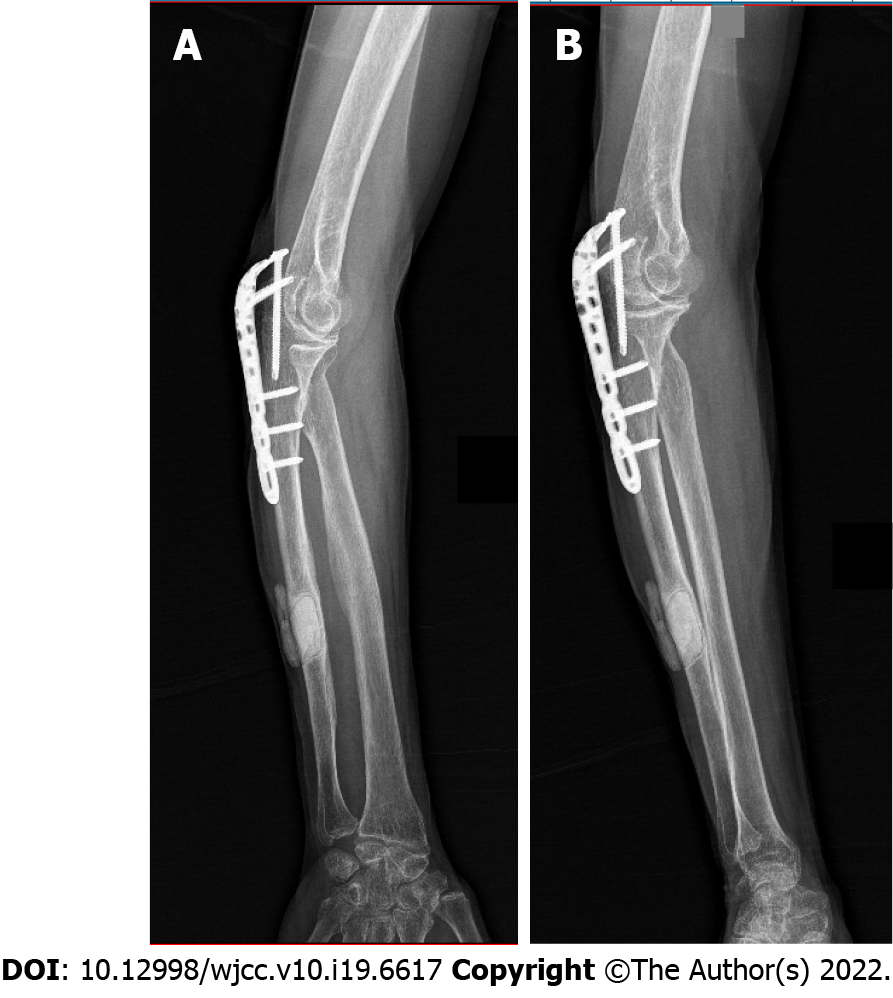 Figure 9 X ray. A: Anteroposterior film; B: Lateral film. Ten months after surgery showed the osteolytic lesions had healed (except the bone cement filled lesion) in the right ulna.
DISCUSSION

Bone cryptococcosis is an opportunistic infection occurring mostly in immunocompromised patients with HIV infection, malignancy, solid organ transplant, connective tissue disease, and immunosuppressive therapy[12,13]. The rate of cryptococcosis occurring in immunocompetent persons is described as merely 1/100000[14]. Cryptococcal osteomyelitis mostly involves vertebrae, femur, tibia, rib, clavicle, pelvis, and humerus[15]. The ulna is a rare target. As far as we know ulna osteomyelitis due to cryptococci has been reported in only two cases, one was associated with sarcoidosis, and the other was associated with systemic lupus erythematosus[16,17]. There are two origins of cryptococcal osteomyelitis: hematogenous dissemination, and direct inoculation. In the former, the fungus spreads from primary lung source to colonize bone sites and induces infection. The latter often results due to a history of direct repetitive trauma and has been described in only four cases[18]. The present case was speculated probably to be the result of hematogenous dissemination based on (1) local swelling prior to skin ulceration and sinus formation; (2) multiple non-contiguous osteolytic lesions in the ulna; and (3) no history of direct repetitive trauma at the local infected site.

We did not find any detailed investigations in literatures as to why and how cryptococcal osteomyelitis occurs in immunocompetent patients. Basically, the occurrence of infection generally depends on pathogens virulence surpassing host immunity, but host immune status seems more crucial in cryptococcosis[14]. The present patient was found to have a slightly decreased total T-lymphocyte percentage and count, in addition to a decreased CD4+ count, but normal CD4+ and CD8+ percentage, also normal CD4/CD8, plus increased B-lymphocyte and NK cell percentage were noted. However, there are still some unclear issues in this case: Where the primary infection located? why cryptococcal osteomyelitis occurred in the mid-distal segment of the ulna but not in the proximal segment where surgery was previously undertaken?

Skeletal cryptococcosis is still a diagnostic and therapeutic challenge. Most patients present with non-specific clinical manifestations namely soft tissue swelling, pain, and tenderness, some develop skin ulceration or sinus formation[17]. Radiological findings often reveal irregular osteolytic lesions with little or no periosteal reaction, which are similar to infection with Mycobacterium tuberculosis, bacteria or malignancy[17]. Radiographic evidence often incurs a delay in the diagnosis as these features usually lag behind the clinical findings by weeks or months[19]. Specific examinations, including antigen detection, culture and histopathology, are critical for the diagnosis[20]. There is no consensus on standardized treatment for cryptococcal osteomyelitis although the Infectious Disease Society of America (IDSA) has published guidelines[21]. According to these guidelines, surgery should be performed for persistent or refractory fungal bone infection. With regard to drug treatment, the IDSA recommend amphotericin B in combination with flucytosine as induction therapy followed by consolidation and maintenance therapy with fluconazole for disseminated cryptococcosis. However, direct fluconazole treatment (400 mg or 6 mg/kg per day orally for 6-12 mo) could also be considered for isolated cryptococcal osteomyelitis in immunocompetent patients without central nervous system involvement. The duration of antifungal drug treatment should be evaluated according to clinical symptoms, imaging, and serum cryptococcal antigen[22]. Diagnosis in the present case was confirmed by twice following culture, and antifungal treatment was administered based on the results of drug sensitivity testing. In view of the requirement for accelerating local infection control and limb function recovery, surgical debridement was also performed. To date, cryptococcal osteomyelitis in this patient has healed well and her clinical symptoms and signs have completely disappeared.

Isolated cryptococcal osteomyelitis is clinically rare in immunocompetent patients. Nevertheless, it should be considered in the differential diagnosis of osteolytic lesions. Special fungal examinations and culture should be performed for definite diagnosis, and early administration of antifungal therapy can achieve better clinical outcomes.

We thank the patient for her permission to share the case information.