Anti-N-methyl-D-aspartate receptor encephalitis (NMDARe) is capable of presenting a relapsing course and coexisting with myelin oligodendrocyte glycoprotein antibody disease, whereas it has been relatively rare. We describe a man with no history of tumor who successively developed anti-NMDARe and anti-myelin oligodendrocyte glycoprotein antibody disease.

A 29-year-old man was initially admitted with headache, fever, intermittent abnormal behavior, decreased intelligence, limb twitching and loss of consciousness on July 16, 2018. On admission, examination reported no abnormality. During his presentation, he experienced aggravated symptoms, and the re-examination of cranial magnetic resonance imaging (MRI) indicated punctate abnormal signals in the left parietal lobe. External examination of cerebrospinal fluid and serum results revealed serum NMDAR antibody (Ab) (-), cerebrospinal fluid NMDAR-Ab (+) 1:10 and Epstein-Barr virus capsid antigen antibody IgG (+). Due to the imaging findings, anti-NMDARe was our primary consideration. The patient was treated with methylprednisolone and gamma globulin pulse therapy, mannitol injection dehydration to reduce intracranial pressure, sodium valproate sustained-release tablets for anti-epilepsy and olanzapine and risperidone to mitigate psychiatric symptoms. The patient was admitted to the hospital for the second time for “abnormal mental behavior and increased limb movements” on December 14, 2018. Re-examination of electroencephalography and cranial MRI showed no abnormality. The results of autoimmune encephalitis antibody revealed that serum NMDAR-Ab was weakly positive and cerebrospinal fluid NMDAR-Ab was positive. Considering comprehensive recurrent anti-NMDARe, the patient was treated with propylene-hormone pulse combined with immunosuppressive agents (mycophenolate mofetil), and the symptoms were relieved. The patient was admitted for “hoarseness and double vision” for the third time on August 23, 2019. Re-examination of cranial MRI showed abnormal signals in the medulla oblongata and right frontal lobe, and synoptophore examination indicated concomitant esotropia. The patient’s visual acuity further decreased, and the re-examination of cranial MRI + enhancement reported multiple scattered speckled and patchy abnormal signals in the medulla oblongata, left pons arm, left cerebellum and right midbrain, thalamus. The patient was diagnosed with an accompanying demyelinating disease. Serum anti-myelin oligodendrocyte glycoprotein 1:10 and NMDAR antibody 1:10 were both positive. The patient was diagnosed with myelin oligodendrocyte glycoprotein antibody-related inflammatory demyelinating disease of the central nervous system complicated with anti-NMDARe overlap syndrome. The patient was successfully treated with methylprednisolone, gamma globulin pulse therapy and rituximab treatment. The patient remained asymptomatic and follow-up MRI scan 6 mo later showed complete removal of the lesion.

We emphasize the rarity of this antibody combination and suggest that these patients may require longer follow-up due to the risk of recurrence of two autoimmune disorders.

In several individuals, anti-N-methyl-D-aspartate receptor encephalitis (anti-NMDARe) may occur with myelin oligodendrocyte glycoprotein (MOG) antibody disease sequentially or simultaneously[1-3]. However, there have been few reports of recurrent anti-NMDARe with MOG antibody disease overlap syndrome worldwide. We present a case of a young man initially admitted with headache, fever, behavioral abnormalities and intellectual decline, followed by hoarseness, blurred vision, disturbance of consciousness as well as seizures. Magnetic resonance imaging (MRI) involved multiple regions (e.g., the parietal lobe, frontal lobe, midbrain, thalamus, cerebellum and medulla oblongata). From this case, we recommend the simultaneous detection of viruses, autoimmune encephalitis-associated antibodies and central nervous system demyelination-associated antibodies for patients suspected of having central nervous system demyelinating disease or anti-NMDARe. The aim is to increase the understanding of autoimmune encephalitis overlap syndrome as their clinical and prognostic features may differ from those of single-antibody disease.

A 29-year-old man presented to the Neurology Department of our hospital complaining of headache, fever, intermittent abnormal behavior, decreased intelligence, limb twitching and loss of consciousness. During his presentation, he experienced aggravated symptoms.

The patient was admitted to the hospital for the second time for abnormal mental behavior and increased limb movements.

The patient was admitted for hoarseness and double vision for the third time. During his presentation, the patient’s visual acuity further decreased.

The patient had a history of previous surgery for otitis media.

The daughter of the uncle in the family suffered from lupus erythematosus. 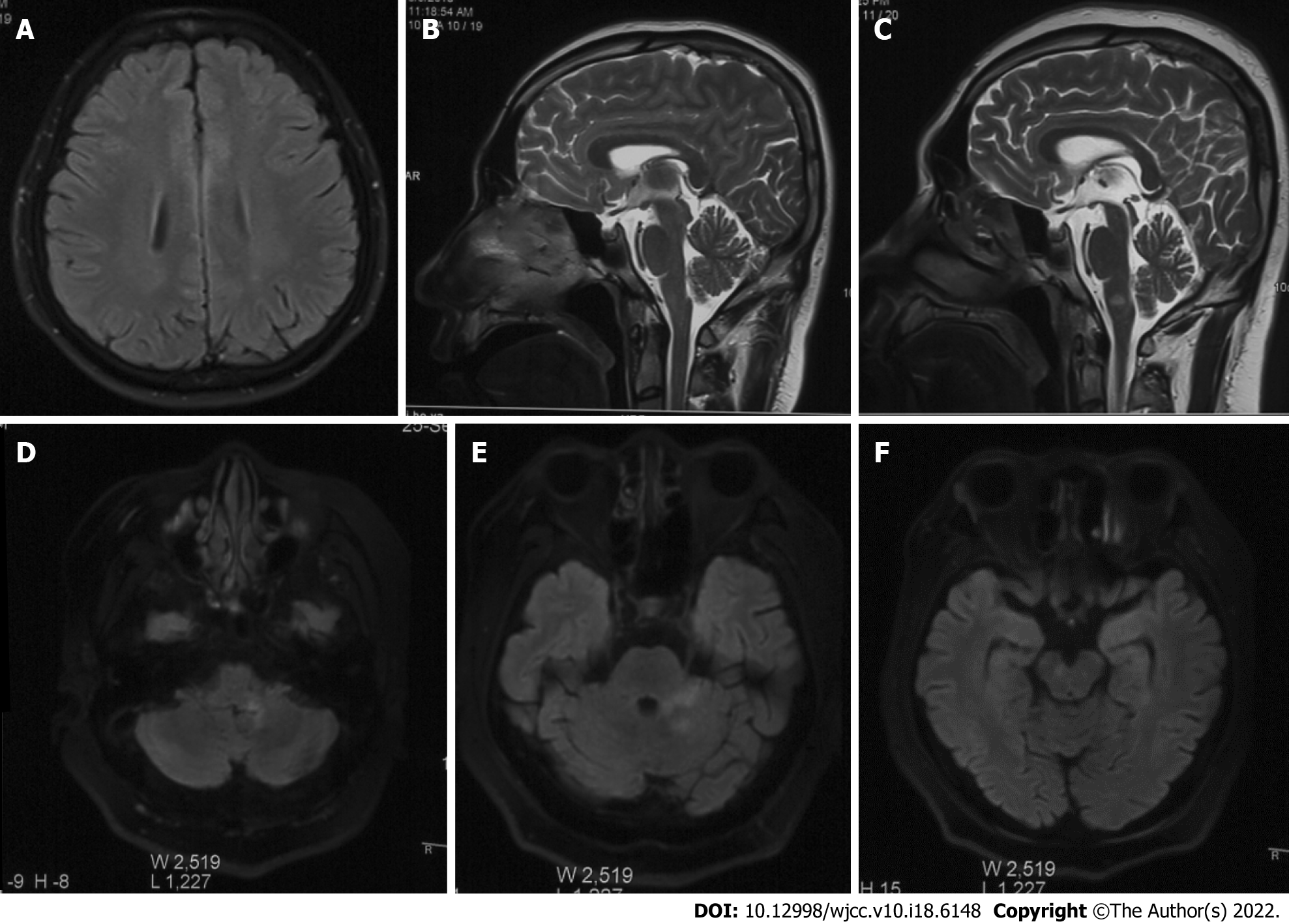 Second admission: Examination of electroencephalography and cranial MRI showed no abnormality (Figure 1B).

Hongzhi Guan, MD, Professor and Chief, Department of Central Nervous System Infection, Beijing Xiehe Hospital. The patient confirmed the diagnosis of recurrent anti-NMDARe for second admission. The patient had psychiatric symptoms, language disorder, autonomic dysfunction and other symptoms in this attack, which were considered to be comprehensive recurrent type. First, the presence of tumors in the patient’s body was assessed, gamma globulin and hormone pulse therapy were standardized in those without tumors, and the hormone dose was reduced to 75 mg, 1 tablet every 2 wk. At the same time, according to the consensus, immunosuppressant (mofetil) 1-2 mg/d, orally for at least 1 year, antiepileptic treatment with sodium valproate and olanzapine increased to 2 mg/time to control psychiatric symptoms.

The final diagnosis of the presented case was MOG antibody-related inflammatory demyelinating disease of the central nervous system complicated with anti-NMDARe overlap syndrome.

The patient underwent medical treatment with methylprednisolone and gamma globulin pulse therapy and olanzapine to improve sleep after the first admission. The patient was assessed to be tumor-free at the second admission and given standard gamma globulin and steroid pulse therapy with a steroid dose reduced to 75 mg, 1 tablet every 2 wk. At the same time, according to the consensus, immunosuppressive agents (mofetil) 1-2 mg/d, orally for at least 1 year and antiepileptic treatment with sodium valproate and olanzapine increased to 2 mg/time to control psychiatric symptoms was prescribed. At the last admission, the patient was successfully treated with methylprednisolone, gamma globulin pulse therapy and rituximab treatment.

The patient had an uneventful clinical course, whilst dexamethasone was decreased progressively until its cessation. At the follow-up visit 1 year after hospital discharge, the patient was asymptomatic. An MRI scan showed complete removal of the lesion. However, we observed scattered red rashes on both upper limbs and trunk. Since dermoscopy showed scattered red spots and plaque changes on the glans penis and ventral surface of the extremities and a few scales, the diagnosis of psoriasis was considered. Halometasone ointment was applied externally.

Cerebrospinal fluid antibodies were negative in the acute phase of the above infectious diseases[15]. In this case, relevant examinations such as cerebrospinal fluid cytology, culture, virus, antibody, cranial MRI, electroencephalogram, tumor screening [tumor markers, chest computed tomography, scrotum, both kidneys, hepatobiliary b-ultrasound] and positron emission tomography-computed tomography were perfected for differential significance[9,16]. We report a young man who initially presented with headache, fever and epilepsy as the first symptoms, followed by behavioral abnormalities, intellectual decline, dyskinesia and decreased autonomic function in accordance with the course of “bimodal encephalitis” reported in the literature[17]. Combined with cerebrospinal fluid NMDAR antibody (+) 1:10, EBV viral capsid antigen antibody IgG (+), negative tumor screening program and other examinations, it was considered to be anti-NMDARe secondary to non-tumor viral encephalitis. The disadvantage of this case is that metagenomic next-generation sequencing was not further refined to identify the presence of other bacterial or viral infections.

Five months after improvement of treatment, the patient once again developed psychiatric symptoms and increased limb movements, and the cerebrospinal fluid NMDAR antibody (+) was 1:10. Given the definition of recurrent anti-NMDARe, i.e. new symptoms not able to be explained by other reasons or aggravation of original symptoms were identified 2 mo after the improvement of NMDARe treatment[2,10], the diagnosis of recurrent anti-NMDARe could be confirmed. Subsequently, the patient developed hoarseness and double vision, and the re-examination of cranial MRI + enhancement indicated new lesions. On the whole, anti-NMDARe was not related to optic nerve damage and sensory disturbance in clinical practice, and patients suffering demyelinating diseases of the central nervous system are considered to be combined with MRI and clinical manifestations. The detection of serum MOG antibody indicated MOG (+) 1:10, by complying with the diagnostic criteria of MOG antibody disease[18]. Then diagnosis of anti-NMDARe with MOG antibody disease overlap syndrome was confirmed.

Characteristics of this case include: (1) Etiology: it has been reported in the literature that anti-NMDARe is related to tumors, but the incidence of tumors detected in patients suffering MNOS is small, and the prognosis is good[2,10,19]. The present patient agreed with previous literature reports in which no tumor was detected during a 2-year course; (2) Affected population: MOG antibody disease and anti-NMDARe are usually more common in women, and the incidence of MNOS in children is higher than that in adults[1,5,9]. However, the patient in this case was an adult male, it was relatively rare; (3) Clinical manifestations: the clinical symptoms of recurrent anti-NMDARe are mild, overall manifested as a single symptom, which is mild when recurrent[10,20]. Nevertheless, this patient was inconsistent with existing literature reports, showing psychiatric symptoms, language impairment and autonomic dysfunction. At the time of recurrence, he displayed considerable clinical symptoms, i.e. comprehensive recurrent anti-NMDARe; (4) MRI findings: the cranial MRI of patients suffering anti-NMDARe may be unremarkable, or there may be only scattered cortical and subcortical dot-like abnormalities[4,20]. The first two episodes in this patient were consistent with the findings in previous reports. All patients suffering MNOS will have supratentorial lesions and less infratentorial lesions[1], but both supratentorial and infratentorial cranial MRI were involved in this patient; (5) Prognosis: the optic nerve injury and encephalitis of this patient recovered completely, thereby not complying with the findings of Titulaer et al[2], who found that patients suffering MNOS had a delayed recovery from demyelinating disease and a more pronounced residual deficit; and (6) Concomitant disease: At present, anti-NMDARe secondary to EBV-related viral encephalitis has not been reported worldwide, and psoriasis was reported by dermatoscopy during the 6-mo follow-up of the patient. Psoriasis[21] is an immune-mediated polygenic genodermatosis, which may be the result of a combination of genetic, environmental and immunological factors. To the best of the authors’ knowledge, there have been no reported related cases worldwide.

We thank the patient for consenting to our reporting of this case.