Follicular lymphoma (FL), a common type of indolent lymphoma, carries markers of the germinal center, and the rearrangement of the BCL-2 gene is regarded as an initiating event and a hallmark of the neoplasm. When FL has marginal zone differentiation, some marginal zone features are carried by the neoplasm.

A 54-year-old male with lymphadenopathy, splenomegaly and hyperlymphocytosis was diagnosed with FL with marginal zone differentiation. The tumor demonstrated different features in the bone marrow (BM) compared with the follicle of the lymph node (LN). Some component of the neoplasm mimicked marginal zone lymphoma, such as infiltrating the marginal zone of the LN, displaying a monocytoid shape and lacking the expression of CD10 in the BM. The diagnosis of FL was made due to the concurrent detection of BCL-2 rearrangement in the LN and BM.

Discordant pathological features in LN and BM could mislead diagnosis. When clinical and pathological manifestations are confusing in diagnosis, typical genetic abnormalities are decisive.

Core Tip: We reported a case of follicular lymphoma presenting like marginal zone lymphoma due to its marginal zone differentiation and made the diagnosis according to the detection of the rearrangement of BCL-2.

As the most common indolent lymphoma, follicular lymphoma (FL) is recognized as the neoplasm of B lymphocytes in germinal center, characterized by t (14; 18) (q32; q21)[1]. Clinically, FL is sensitive to treatments but manifests an incurable and recrudescent course. The neoplastic cells of FL are composed of small to medium-sized cleaved centrocytes and large non-cleaved centroblasts, whose proportion determines the grading system[2]. The rearrangement of chromosomes 14 and 18 leads to the fusion of the IGH and BCL-2 genes, causing the overexpression of the anti-apoptotic protein BCL-2. Based on the morphology of neoplastic centrocytes and centroblasts in the follicles, as well as the typical immunophenotype of the malignant cells, the pathological diagnosis of FL is made, and the detection of BCL-2 rearrangement makes the diagnosis overt. FL is occasionally associated with marginal zone or plasmacytic differentiation, sharing some morphologic and phenotypic features of marginal zone lymphoma (MZL) or plasmacytoma[3].

MZL is also a kind of indolent lymphoma, with different subtypes including nodal marginal zone lymphoma (NMZL), mucosa associated lymphoid tissue lymphoma and splenic marginal zone lymphoma (SMZL). The cells of MZL harbor a monocytoid shape and display a phenotype of post-germinal center B lymphocytes without the expression of CD10. The bone marrow (BM) is very likely to be involved in patients with SMZL and NMZL, and white blood cell count is often high in patients with SMZL. In this paper, we reported a case of FL with marginal zone differentiation, which showed distinct phenotypes in the lymph node (LN) and the BM and resembled the presentation of MZL.

The hospitalized patient, a 54-year-old male, complained about fatigue and breathlessness.

The patient had fatigue for 1 mo and progressive breathlessness for 1 wk.

The patient had no other remarkable medical histories, and there was no history of fever.

The patient had no previous or family history of similar illness.

Swelling of cervical, axillary and inguinal LNs was discovered through physical examination.

Image examination demonstrated splenomegaly and multiple lymphadenopathy of the mediastinum and the enterocoelia.

BM aspirate revealed prominent hyperplasia of lymphocytes, between small and medium size, accounting for 85% of the nucleated cells. Most of the lymphocytes were small with a round nucleus, while a small fraction of them had cleaved or notched nuclei (Figure 1A and B). Flow cytometry analysis proved a clonal population of mature B lymphocytes, positive for CD19, CD20, CD79b and FMC7 instead of CD3, CD5 or CD10 (Figure 1C). BM biopsy confirmed the paratrabecular infiltration of the neoplastic lymphocytes and a phenotype consistent with flow cytometry analysis (Figure 2A and B). The fusion of the BCL-2 and IGH genes were detected by fluorescence in situ hybridization of the BM (Figure 3A and B). The next generation sequencing of the BM revealed mutations of genes TP53, CREBBP (p. R1446H) and KMT2D (p. Q1613X). 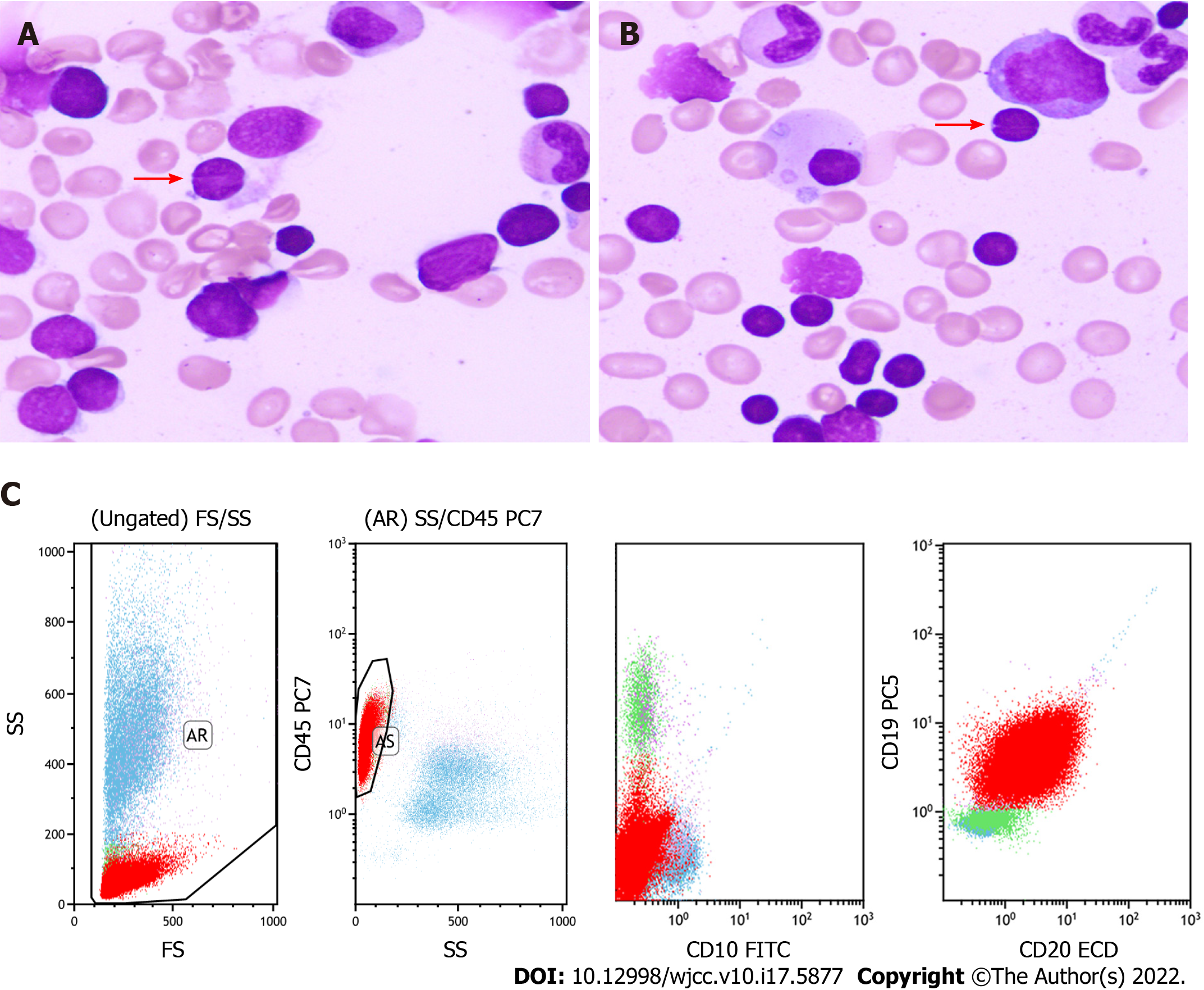 Figure 1 Morphology and flow cytometry analysis of the bone marrow. A and B: The bone marrow (BM) was mainly infiltrated by monocytoid cells, accompanied with a few cells with cleaved or notched nuclei (pointed by arrows) [400 × (A) and 400 × (B)]; C: Flow cytometry revealed that the neoplastic cells (the red group) in BM were positive for CD19 and CD20 but negative for CD5 and CD10. 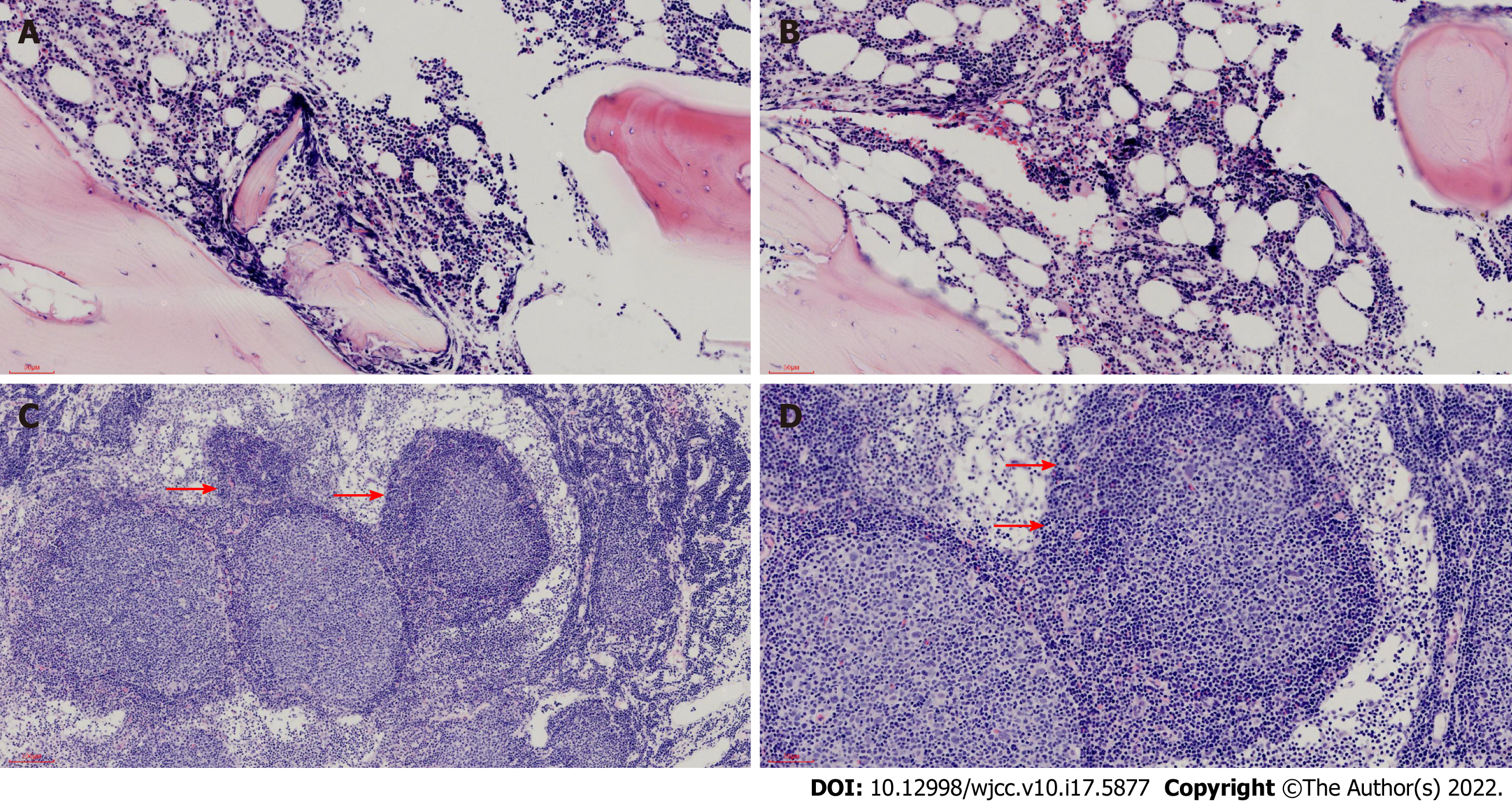 Figure 2 Morphology of the bone marrow and lymph node. A and B: Hematoxylin and eosin (HE) stain displayed that the bone marrow was infiltrated by neoplastic lymphocytes in a paratrabecular pattern [100 × (A) and 200 × (B)]; C and D: HE stain showed that expanded follicles were infiltrated by neoplastic centroblasts and centrocytes, and serried monocytoid cells (arrows) [100 × (C) and 200 × (D)] surrounded them. 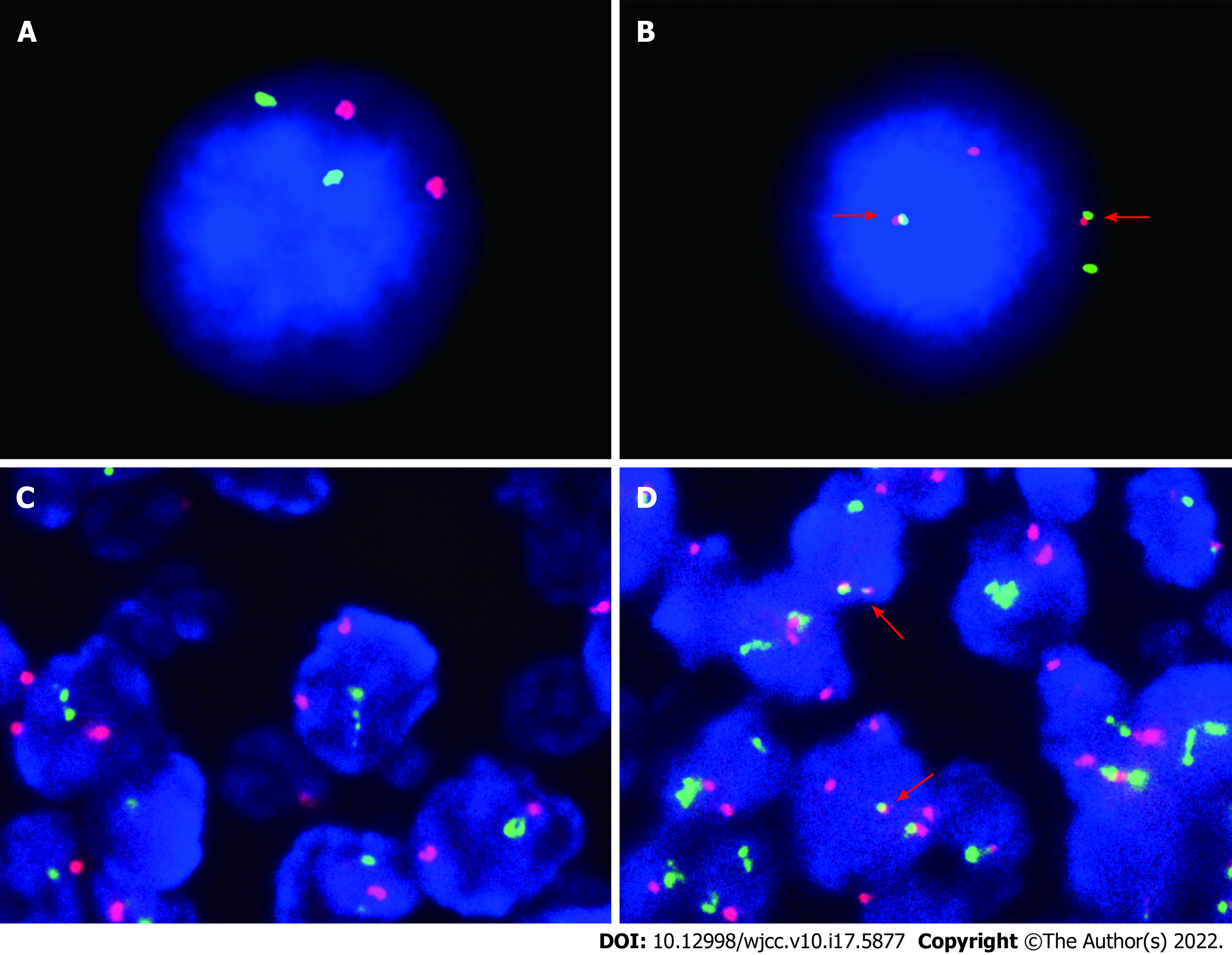 Then cervical LN biopsy was performed. Hematoxylin and eosin stain of the LN gave the information that the expanded follicles were infiltrated by large centroblasts and relatively smaller centrocytes. The number of large centroblasts in the follicles significantly increased, over 15/high power field. Numerous and serried monocytoid lymphocytes occupied the marginal zone surrounding and between the follicles, forming a dark background (Figure 2C and D). Immunohistochemical examination discovered that the overgrown follicular cells were positive for CD10 (Figure 4A and B), BCL-6, CD20 (Figure 4C and D) and Ki-67 (40%) but negative for myeloid cell nuclear differentiation antigen, a marker closely associated with NMZL. The positive CD21 confirmed a follicular dendritic cell meshwork. The neoplastic cells in the marginal zone were negative for CD10 (Figure 4A and B) but positive for CD20 (Figure 4C and D). Fluorescence in situ hybridization detection of the LN illustrated the BCL-2/IGH rearrangement in both follicles and marginal zone (Figure 3C and D). 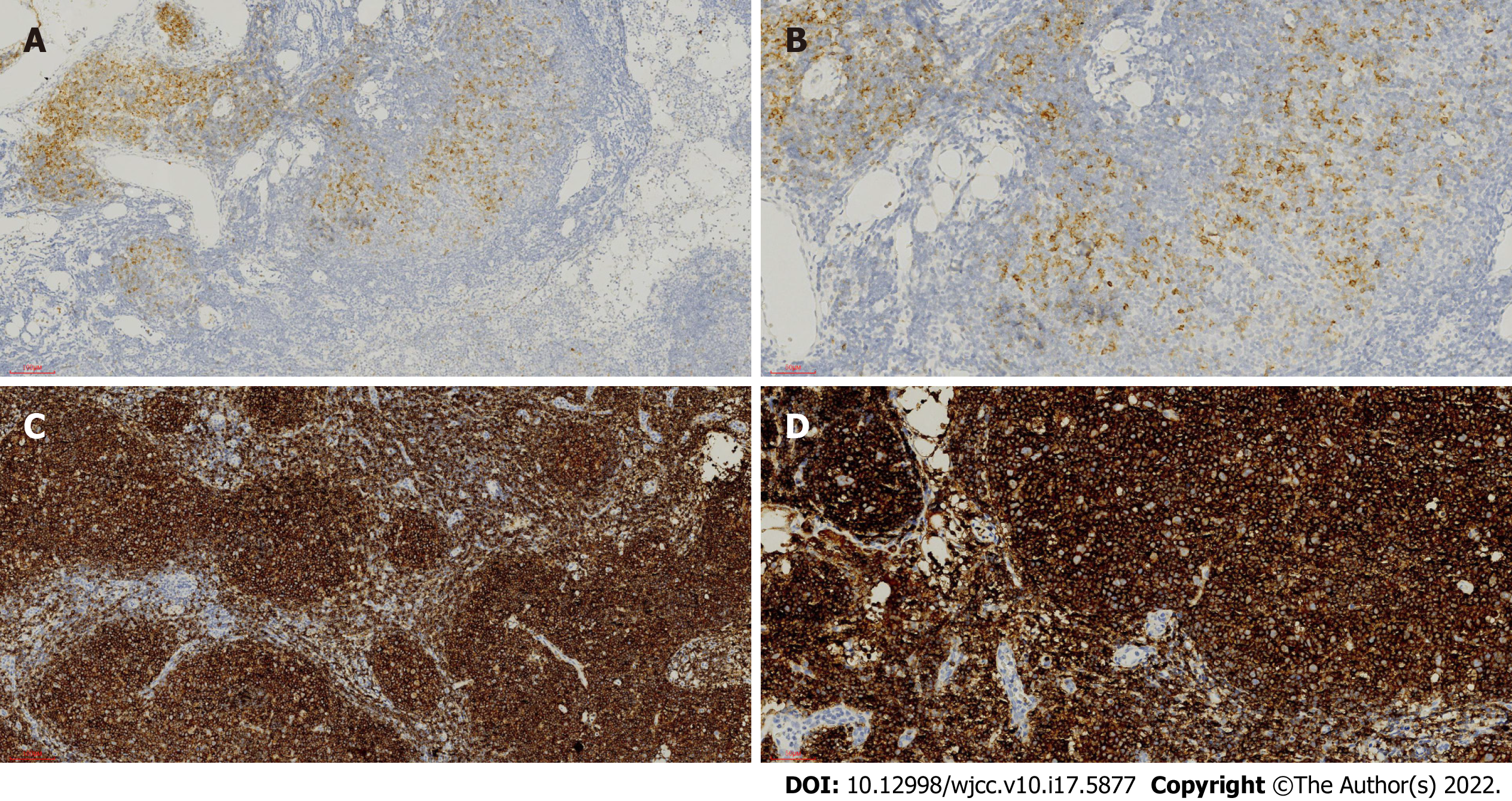 In the follicles, the phenotype of the cells was different from that in the marginal zone and the BM, but the two groups of cells with distinct phenotypes should be considered as one clone for the coexistence of the rearrangement of BCL-2. The patient was diagnosed with follicular lymphoma with marginal zone differentiation involving the BM.

The patient received six cycles of immune-chemotherapy of R-CHOP (rituximab, cyclophosphamide, liposomal doxorubicin, vindesine and prednisone). After that, his symptoms were markedly relieved, and the hemoglobin level and white blood cell and platelet count became normal. The whole-body computed tomography scan revealed significant shrinkage of the LNs and the spleen.

The patient received the maintenance therapy of rituximab every 2 mo. However, he died of relapse after 2 years.

The morphologic manifestations of FL with marginal zone differentiation have been described as neoplastic follicles that were surrounded by proliferative monocytoid B lymphocytes[4,5]. This was extensively observed in this case. The follicles were infiltrated by centroblasts and centrocytes, and the interfollicular area was occupied by vast monocytoid lymphocytes. But in this case, the phenotype of the two parts was discordant, reflecting two successive stages in B lymphocyte differentiation. The positive stain of CD20 indicated that both components were B cell-derived, while the marginal zone component was negative for CD10, which was positive in the follicles. In addition, it was reported that myeloid cell nuclear differentiation antigen was widely expressed in NMZL but scarcely in FL[6,7]. The absence of its expression could distinguish FL with concurrent NMZL.

The neoplastic cells in the germinal center and the marginal zone of this case were different in phenotype, but it was clear that they were related to genetics according to some previous studies[8,9]. The molecular analysis of immunoglobulin heavy chain gene of the two components revealed that they shared identical or nearly identical complementarity determining region III sequences[4,10], and the rearrangement of BCL-2 was found to be a common event of them by PCR[11]. In this case, the pathological manifestation of the LN was consistent with the features of FL with marginal zone differentiation, and the rearrangement of BCL-2 confirmed this diagnosis. The discordant phenotype in the follicle and the marginal area indicated the coexistence of two differentiation status in one neoplasm.

In BM and peripheral blood, the MZL cells have been reported to be polymorphic and predominantly monocytoid while infrequently centrocytoid or plasmacytic[12,13]. But for FL, the BM is mainly involved by centrocytoid cells, with typical “cleaved or notched” nuclei[14-16]. The MZL cells display markers of post-germinal center B cell and are negative for CD10, which is different from the FL cells in BM. In addition, it is a normal event of FL infiltrating the BM, but it is rare for the peripheral blood to be involved, not to mention in a hyperleukocytic pattern[14,16]. This is in contrast to MZL, especially SMZL, which usually takes on hyperlymphocytosis. In this case, the BM and the peripheral blood were mainly infiltrated by the CD10 negative monocytoid cells, with a few cleaved or notched-nuclei cells. Also, the white blood cell count massively increased, resembling the features of MZL. Nevertheless, the rearrangement of BCL-2/IGH was detected in both the LN and the BM, while it has been scarcely detected in MZL[17,18]. Additionally, FL is abundant in mutations of genes that encode histone modifiers, such as KMT2D, EZH2 and CREBBP[19]. The concurrent mutations of CREBBP and KMT2D, in addition to the BCL-2/IGH rearrangement, strongly indicated that the neoplasm was germinal center originated instead of MZL. These genetic alterations suggested that the cells in the LN and BM were from the identical clone of FL essentially.

There were reports that FL cells occasionally lost the expression of CD10 when BM was involved, but the underlying reasons were not clarified[20]. FL cells with marginal zone differentiation tended to mimic the biological behavior and the clinical presentation of MZL, and the CD10 of the marginal zone component was usually missing[8]. Therefore, it is presumable that, in this case, the marginal zone component of the lymphoma migrated to the blood and the marrow, displaying the features of MZL (the monocytoid shape, the absence of CD10, being hyperleukocytic and splenomegaly, etc) but carrying the intrinsic genetic abnormalities of FL.

The patient responded to the R-CHOP regimen well, which also applies to MZL patients. However, he suffered from an early relapse, due to the dismal prognosis of the disease harboring the mutation of TP53.

Generally, different subtypes of B cell lymphoma represent different evolutional stages of normal lymphocytes. The primary site and the phenotype of lymphomas tend to resemble its normal counterparts. On the contrary, the morphology, the immunophenotype and the clinical presentation of the disease are deceiving when it is with marginal zone differentiation. Without genetic detection, this case can be easily misdiagnosed as concurrent existence of two types of lymphoma. Therefore, it is necessary to take a deep insight into the genetic message of the neoplasm when performing diagnosis.