Lung cancer is often metastasized to the brain, liver, kidneys, bone, bone marrow, and adrenal glands; however, metastasis of primary lung cancer to the paranasal sinuses is extremely rare.

In this paper, we present a case of metastatic tumors of the sinus secondary to lung adenocarcinoma. The patient was a 46-year-old woman who underwent surgical removal of lung carcinoma. Four months after the surgical removal of the lung tumor, the patient presented with epistaxis, and on investigation, the diagnosis was confirmed to be nasal sinus tumors due to metastasis of lung adenocarcinoma.

Thorough investigation of patients with epistaxis and a history of lung cancer is necessary to diagnose metastatic sinus tumors. We reviewed relevant literature and found that there are no characteristic clinical or radiologic features for metastatic sinus tumors; however, the diagnosis can be confirmed by histopathological examination of biopsied tumor sample.

In this paper, we present a rare case of metastatic sinus tumor arising from adenocarcinoma of the lungs. In addition, we review literature on metastatic tumors of the nasal cavity and paranasal sinuses secondary to primary lung carcinoma.

The patient was a 45-year-old woman who was diagnosed with lung adenocarcinoma and underwent surgical resection of the tumor. Four months after the tumor removal, she presented with epistaxis and left-sided headache. however, the symptoms were considered insignificant and were not investigated further. Five months after the lung surgery, the patient developed a swelling around the left eye socket, which increased progressively and was accompanied by purulent nasal discharge, nasal obstruction, decreased sense of smell, or decreased vision.

Previously, the patient was found to have a right upper pulmonary mass during a routine physical examination (Figure 1). To rule out malignancy, thoracoscopy was performed, which revealed a mass (diameter approximately 3 cm) located in the posterior segment of the right upper lobe of the lung. Surgical removal of the tumor was successful, with resection of the right upper lobe and adjacent lymph nodes. The tumor was firm in consistency and oval, with an intact capsule. Postoperative pathological examination revealed that the lesion was a moderately differentiated lung adenocarcinoma, with no involvement of the incision margin of the bronchus and no metastasis to the lymph nodes. 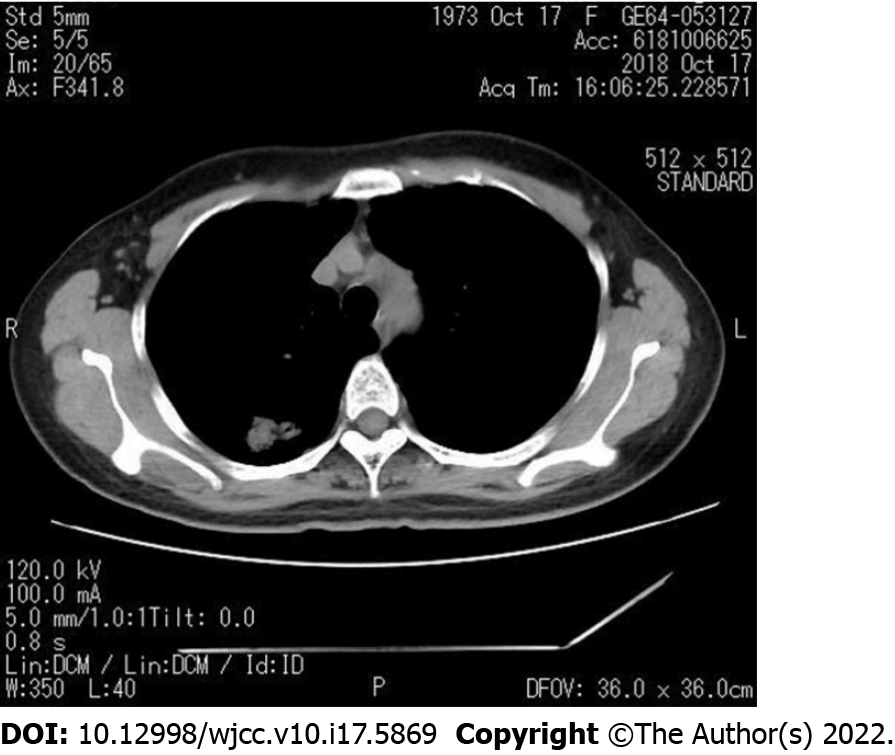 Figure 1 Computerized tomography examination showing a mass located in the posterior segment of the right upper lobe of the lung.
History of past illness

History taking also revealed that the patient had no other relevant medical history or family history.

On physical examination at presentation, the external nose was found to be normal in shape. No obstruction of the nasal passages was observed on either side, and no abnormal secretion or colonization was detected. There was no obvious tenderness over the areas of the sinuses.

Results of serum tests for tumor markers were all negative. No abnormalities were noted in the coagulation indices or in the results of routine blood tests, tests for immunoglobulin light chains, thyroid hormone levels, and tests for autoimmune antibodies.

Computed tomography (CT) and magnetic resonance imaging (MRI) examination of the sinus was performed, the findings revealed left maxillary sinusitis, bilateral ethmoid sinusitis, and septal deviation, with bone destruction of the left ethmoid sinus. (Figure 2A and B). 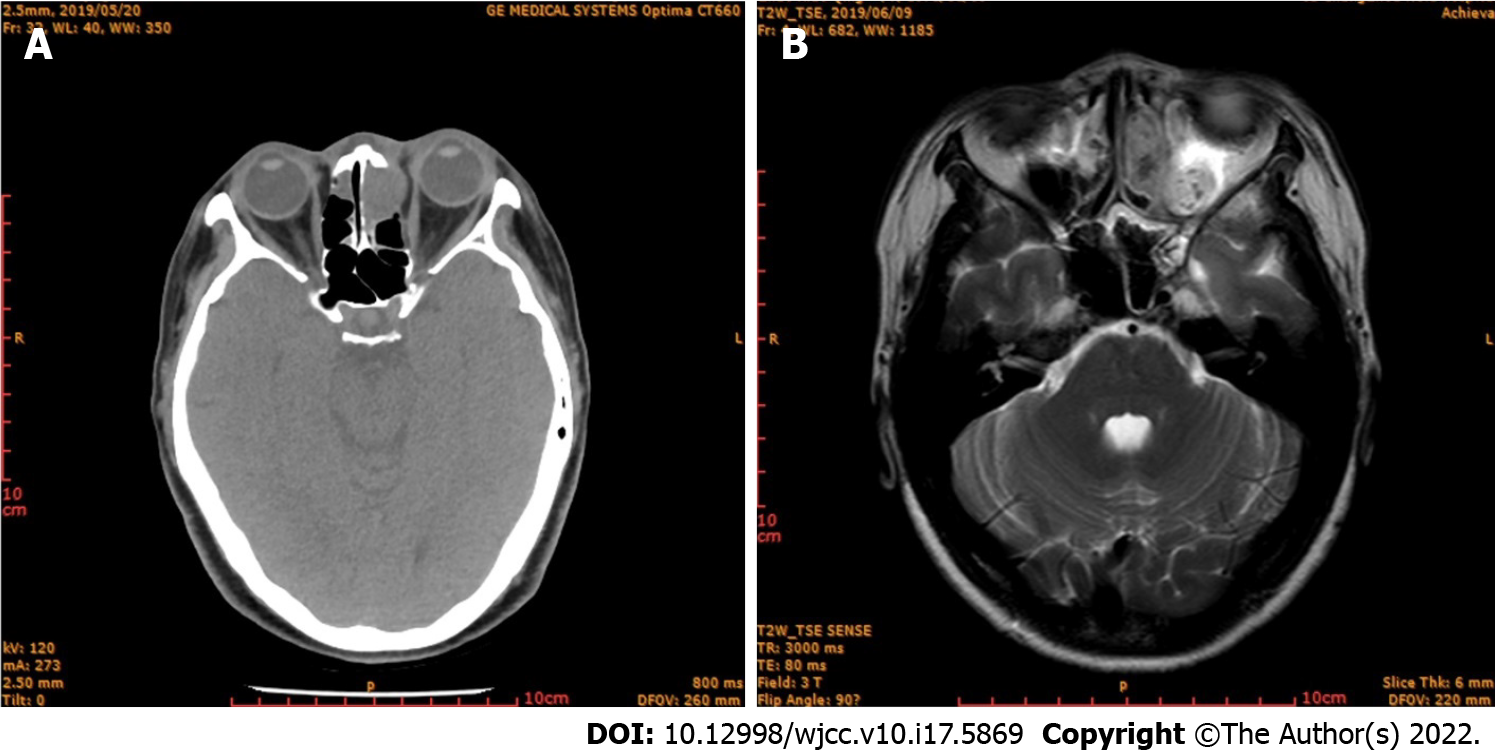 On the basis of the clinical and imaging findings, the diagnosis was established as lung cancer metastasis to the nasal cavity. The tumor in the paranasal sinus was removed and subjected to pathological examination.

The patient underwent surgical treatment for the removal of the sinus tumors at our hospital. During the operation, a large number of lesions with fish-meat-like appearance of the tissue were found in the ethmoid sinus; the lesions were fragile and easily bleeding. Destruction of the cribriform plate was observed, as well as tumor pressure on the orbit through the orbital fascia. Pathological examination of the biopsied tumor tissue sample revealed that the tumor was malignant. The anterior and middle groups of the ethmoidal sinuses were debrided until the cribriform roof; the frontal sinus was then opened, and a large number of lesions with fish-meat-like appearance of tissue were found in the frontal recess and frontal sinus. An incision was made on the eyebrow arch, and the subcutaneous tissue and muscle tissue were separated. Bone destruction was also observed in the anterior frontal sinus wall, along with the presence of lesions with fish-meat-like appearance, which were removed. The frontal sinus cavity was opened, and the necrotic bone tissue was removed. Finally, the eyebrow arch incision was sutured. Postoperative pathological examination revealed the presence of adenocarcinoma infiltrate between fibrous connective tissues. The results of immunohistochemical examination were as follows: CK7(+), CK20(-), Villin(-), Syn(-), CgA(-), TTF-1(+), Napsin A(+), CDX-2(-), S100(-), CK5/6(-), and P63(-). Figure 3 shows the results of the immunohistochemical examination of tissue sample obtained from the metastatic tumors of the sinus. 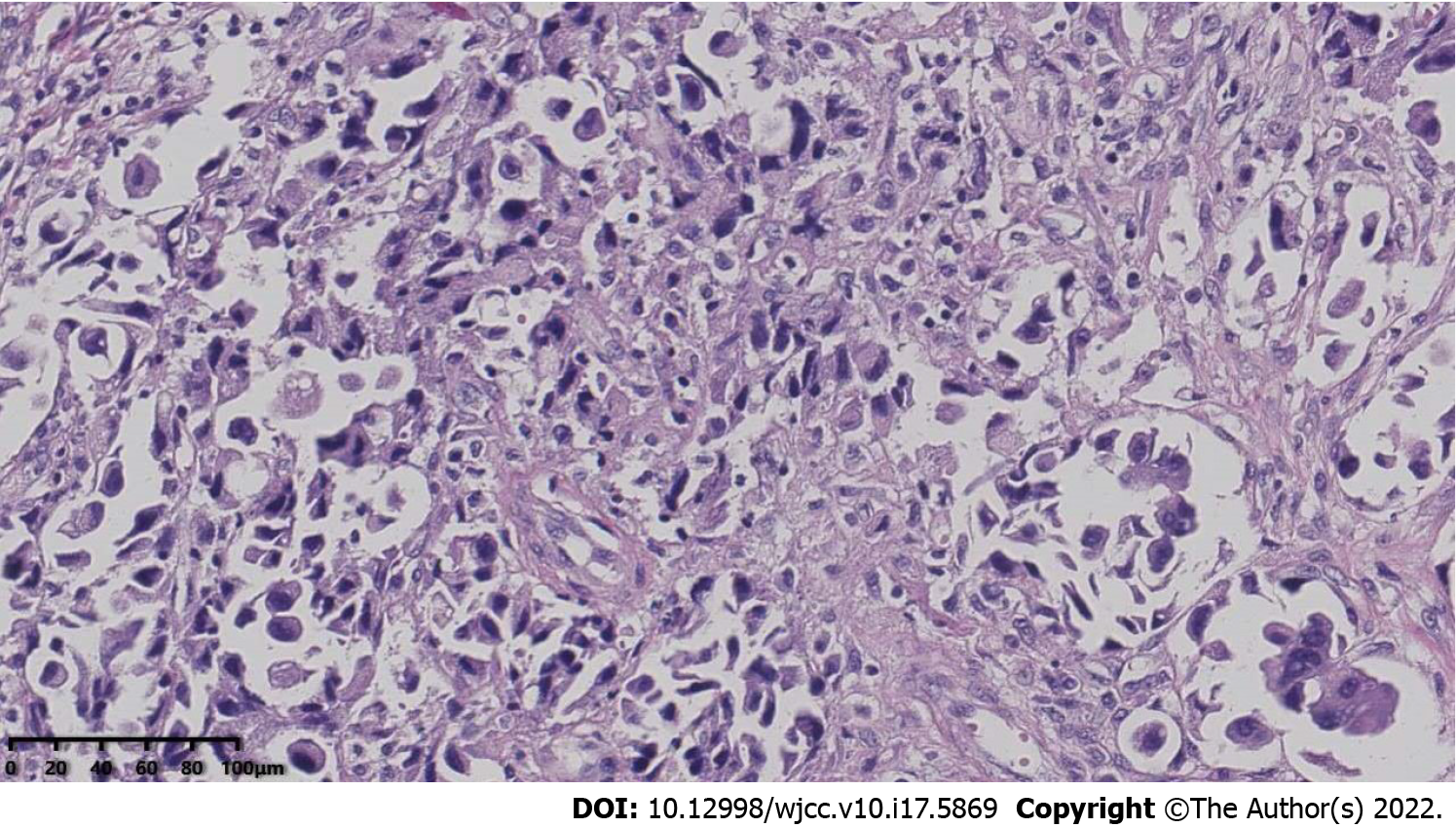 The patient had no postoperative complications and was discharged safely after 7 days. The patient did not receive further radiotherapy or chemotherapy. Follow-up was continued for 2 years, and during this period, she remained completely asymptomatic; CT scans of the lung and sinus were also normal (Figure 4A and B). 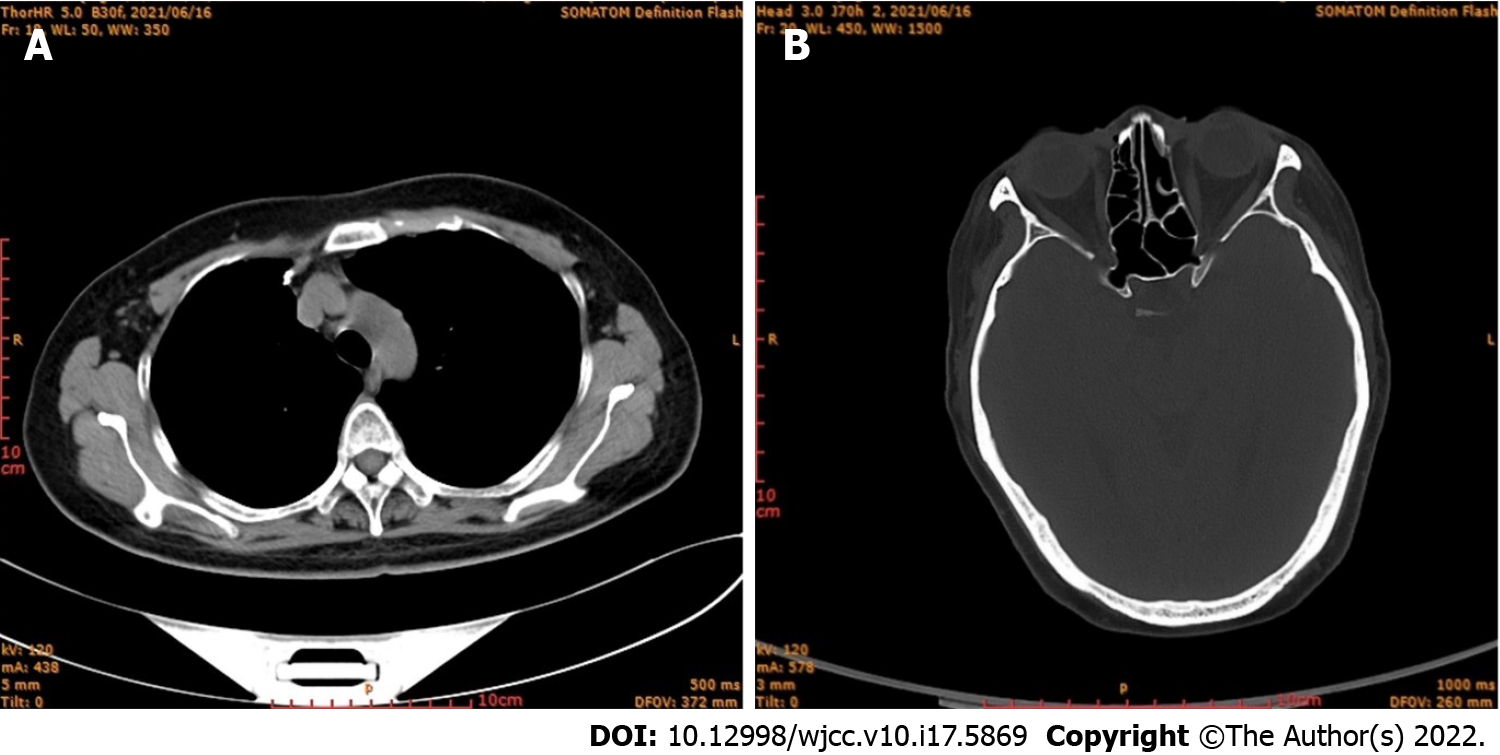 The most likely route by which the metastasis occurs to the sinuses may be hematogenous spread of tumor cells. Since the lungs have a rich blood supply, cells of lung adenocarcinoma may easily enter venous circulation. Intrapleural pressure and abdominal pressure may cause detachment of a tumor plug, whereby tumor cells enter blood circulation. The tumor plug may traverse to the large veins of the head, such as the wing plexus and cavernous sinus, eventually reaching the paranasal sinuses through retrograde movement. Since blood flow at the sinuses is sluggish, the tumor plug may easily fall off the circulation and plant itself, leading to the growth of metastatic tumors.

Distant metastasis of primary lung cancer generally occurs to the liver, adrenal glands, brain, or bone, and only rarely to the nasal cavity and paranasal sinuses. Four cases of lung cancer metastasizing to the nasal cavity and sinuses have been reported since 2001; in all of cases, the tumors were squamous-cell carcinoma and epistaxis was the initial clinical presentation. The distant metastasis of lung cancer is a complex process involving the detachment, transport, and growth of tumor cells[10]. Tumor cells break away from the primary tumor, adhere, and invade the basement membrane; thus, they come into close contact with local capillary or lymphatic capillary endothelial cells. The tumor cells pass through the walls of the blood or lymph vessels and are transported via the blood or lymphatic circulation; platelet agglutination may then occur, leading to the formation of a tumor thromboembolus, which reaches the target tissue to give rise to the metastatic tumor[11]. Lung cancer may metastasize though hematogenous spread, lymphatic spread, or direct invasion[12]. Adenocarcinoma and squamous-cell carcinoma of lung are mainly metastasized via blood circulation and lymphatic circulation, respectively; additionally, in lung cancer, metastasis to lymph nodes generally occurs earlier than other metastases[13].

We conducted a literature search of relevant literature with “lung cancer” and “metastasis” as search terms. The PubMed, Scopus, CNKI, and WANFANG MED ONLINE databases were searched for entries published since 2001, and case reports were screened out. One hundred and thirty-eight cases of lung cancer with distant metastasis were identified. The case reports included 100 males and 38 females, and the youngest patient was 17 years old, while the oldest was 97 years old. In all, 123 cases with confirmed pathological results and metastatic sites were identified; among these cases, adenocarcinoma (Table 1) was the most common pathological type and the sites of metastatic tumors were diverse (Table 2).

Metastasis of lung cancer to the sinus is rare and its presentation nonspecific. No characteristic clinical or radiologic features have been described to differentiate metastatic tumors from primary malignancy of the sinus[3]. However, nasal and sinus tumors commonly present with epistaxis, and the diagnosis can be confirmed by histopathologic examination of biopsy tissue[4].