Renal papillary necrosis (RPN) is a rare disease. It is difficult to distinguish RPN with urinary tract obstruction from upper urinary tract occupying lesions. We reported a case of RPN and made a definite diagnosis largely based upon its endoscopic characteristics.

A 75-year-old woman presented with right flank pain, visible hematuria and a body temperature greater than 39 ℃. Laboratory investigations revealed leukocytosis with 12.7 × 10/L white blood cells and 93.6% neutrophils. Blood creatinine was 333 umol/L. Ultrasonography showed hydronephrosis of the right kidney and a right distal ureteric lesion. After urgent placement of right ureteral double J stent and treatment with antibiotics, the patient’s symptoms and the blood abnormalities improved rapidly. Computed tomography urography showed the presence of multiple occupying lesions in the right pelvis. The endoscopic ureteroscopy revealed that renal papillary necrosis and the subsequent migration of sloughed papillae into the upper ureter and calyces. The sloughed papillae appeared like “cottons”, which were whitish, soft, and irregularly-shaped without blood supply. In addition, the necrotic and sloughed renal papillae were removed by flexible ureteroscopy to prevent further obstruction. Pathological examination found that infarcted renal papillae were associated with inflammatory exudation. Three months after discharge, follow-up computed tomography urography showed no obvious lesions in the renal pelvis.

This case revealed the endoscopic features of RPN. In addition, flexible ureteroscopy proves to be vital in diagnosis and treatment of RPN.

This study reported a patient with an infected and obstructed kidney and the upper urinary tract-occupying lesions. We diagnosed renal papilla necrosis with flexible ureteroscopy, which revealed endoscopic characteristics of the disease so as to avoid unnecessary nephrectomy.

A 75-year-old woman presented with right flank pain, visible hematuria, and a fever (body temperature higher than 39 ℃) in the emergency unit.

The patient had a temperature of up to 39 ℃, and was admitted to the hospital as an emergency because antibiotic treatment was not effective in the clinic.

Personal history and family history were not special.

Laboratory investigations showed a leukocytosis of 12.7 × 10/L with 93.6% neutrophils. Urine routine test was positive for leukocyte and glucose. Her renal function was abnormal since his serum creatinine reached a level of 333 μmol/L. 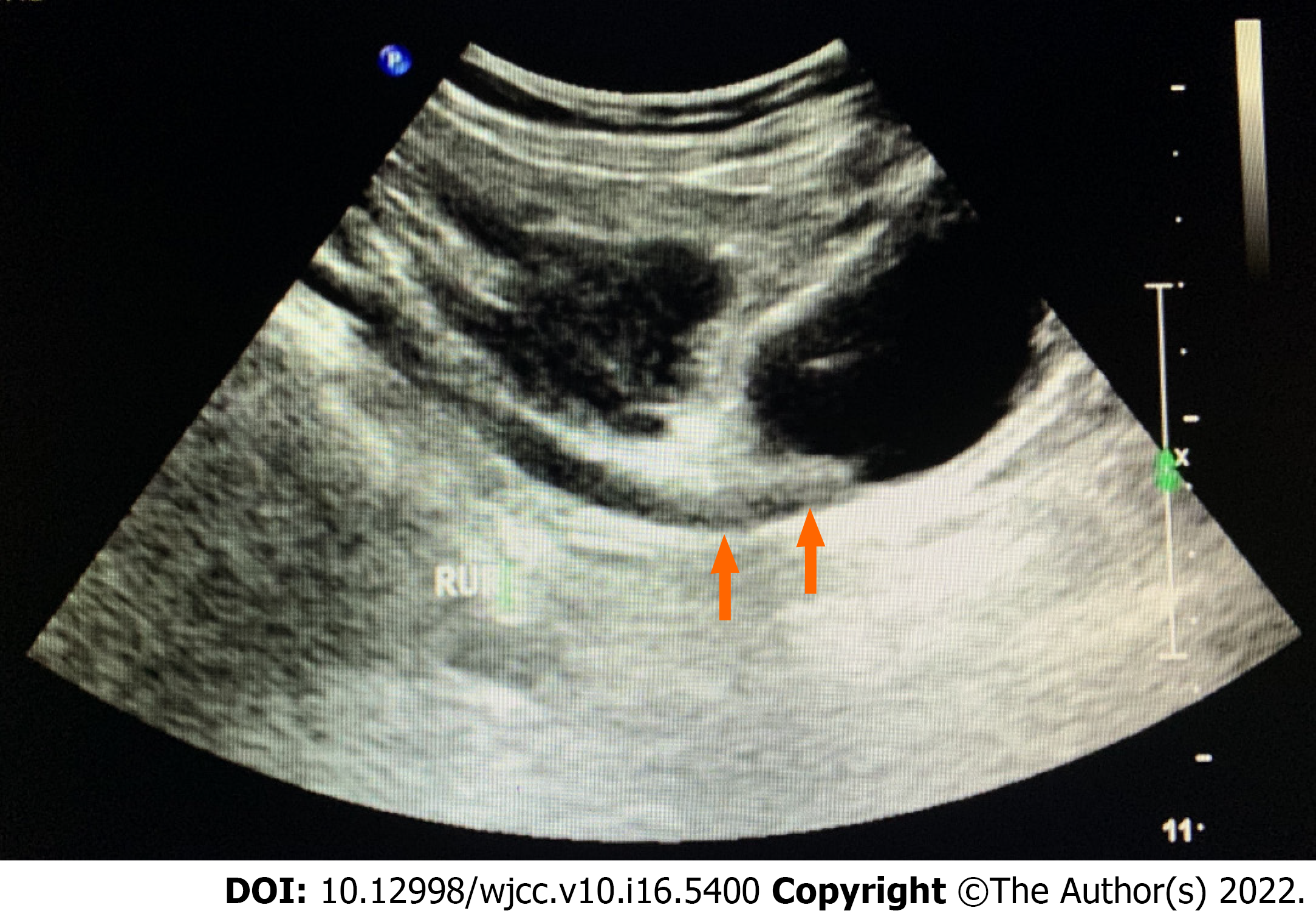 Given the presence of severe urinary tract infection and right hydronephrosis, urgent placement of a right ureteral double J stent was made. After urgent decompression of the upper urinary tract, antibiotics treatment, and diabetic control, the patient’s symptoms improved rapidly and her blood test results including complete blood count and renal function returned to normal.

Subsequent computed tomography urography (CTU) showed inflammatory exudation around the right kidney, and lesions of different sizes were found to be occupying the right renal calyces. The lesions were surrounded almost completely by the contrast during the excretory phase (Figure 2A and B). Punctate thickening was also observed in the right distal ureter. Flexible ureteroscopy was performed in order to make a definitive diagnosis of upper urinary tract lesions. We found that inflammatory hyperemia existed in the mucosa of the renal pelvis. There were numerous occupying lesions floating in the calyces and the upper ureter. The floating materials were whitish and irregularly-shaped without blood supply. Moreover, they appeared like soft and friable cottons. Some partial necrotic renal papillae were sloughing and attached to renal medulla by pedicles (Figure 3A). Meanwhile, some necrotic renal papillae have been sloughed completely, looked like cottons, and floated inside the renal calyces (Figure 3B). The lesion in the right distal ureter suggested by initial ultrasound examination was not found during the flexible ureteroscopy. 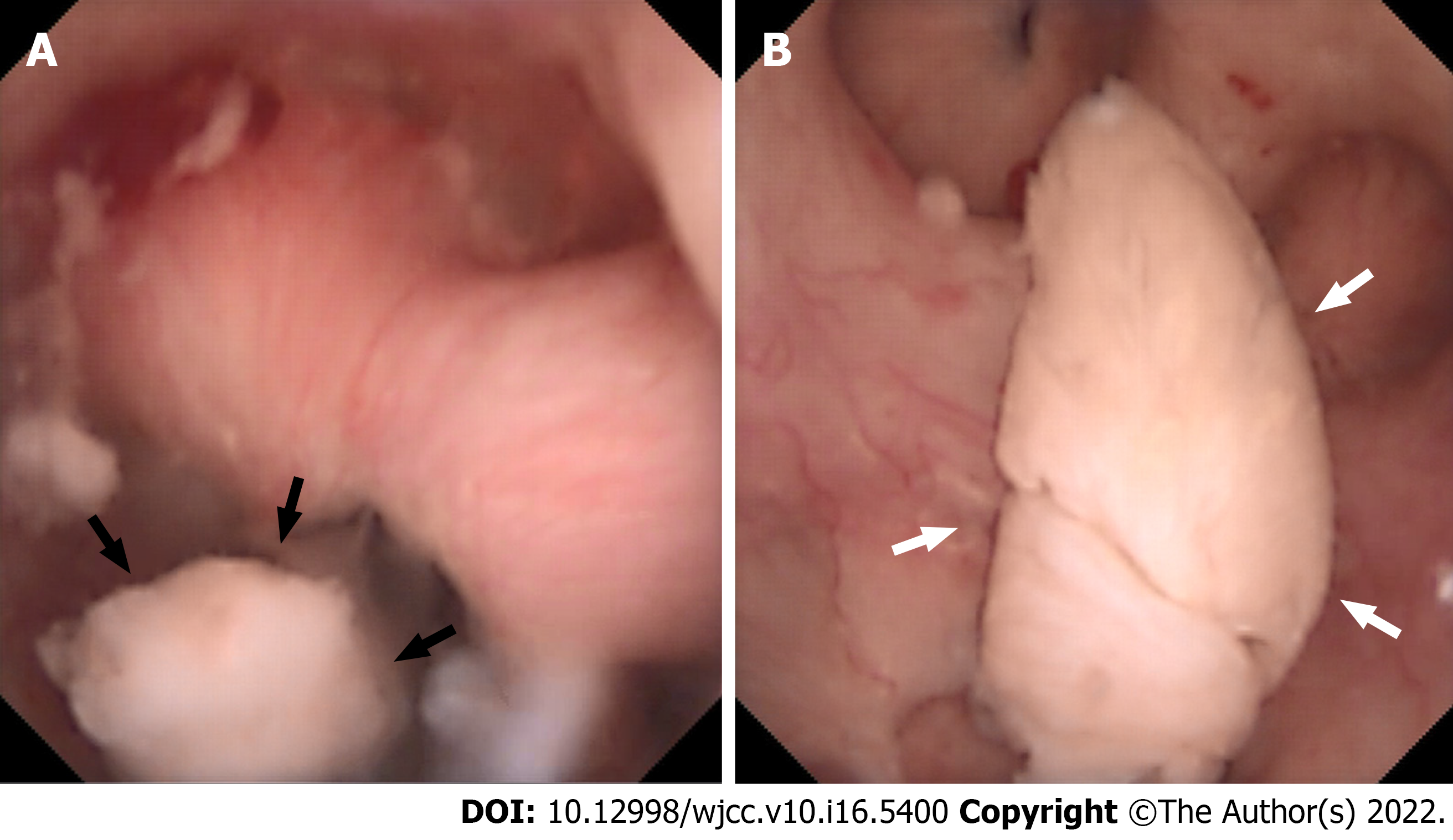 We removed the necrotic and sloughed renal papillae by flexible ureteroscopy to prevent further obstruction. Pathological examination confirmed infarcted renal papilla accompanied with inflammatory exudations (Figure 4A and B).

Figure 4 Histopathological findings, fragments consisting of necrotic material. Infarcted renal papilla was accompanied with inflammatory exudations. No malignancy was identified. A: HE stain, 20 ×; B: HE stain, 40 ×.
OUTCOME AND FOLLOW-UP

The acute obstruction of this patient's right kidney was probably caused by the sloughed renal papillae, as the ultrasonography legibly showed the right distal ureteric lesion. However, the ureteral lesion was not found during the ureteroscopy, which might have been excreted through the ureter since it was soft and friable. In addition, the ureteroscopy revealed that multiple necrotic and splintered renal papillae filled pelvis and the upper ureter, which confirmed the diagnosis of RPN. Fadel et al[2] reported a case of papillary necrosis that was with subsequent migration of a sloughed papilla into the ureteric orifice.

Renal papillary necrosis is a clinicopathological entity where any or all of the papillae undergo selective necrosis. It is typically thought to be caused by diabetes mellitus and urinary tract infection. The renal papillae are considered to be anatomically vulnerable to ischemia, which may be seen in diabetes-associated vascular disorder, or interstitial edema secondary to infection[1]. There have been some cases, in which rapid deterioration occurred and even progressed to death[3]. The early treatment of RPN is important for improving prognosis and reducing morbidity. It is essential to control the underlying problem, such as diabetes, infection, dehydration[4]. In cases of an infected and obstructed kidney, emergency decompression is imperative, and direct visualization may be required to allow for removal of the sloughed papilla and for relief of obstruction by emergency stent placement [2].

In the past, most researches on the RPN were a series of cases and works on radiological images on computerized tomography and magnetic resonance[5]. There were classic images described in the computerized tomography urography, such as ball in tee, lobster claw, signet ring or clubbed calyx to diagnosis RPN[1,6,7]. However, severe renal insufficiency resulting from ureteral obstruction was the contraindication of CTU since the intravascular contrast agents may potentially be nephrotoxic. However, at the same situation, this endoscopic examination does not have such a safety concern, The endoscopic examination is also great for the patient with upper urinary tract-occupying lesions since it may be used to rule out malignant tumor. In this case, this examination confirmed the diagnosis of RPN, and prevented unnecessary nephrectomy. The most important endoscopic feature of RPN was sloughed renal papillae appearing like the floating “cottons” in the pelvis. The sloughed papillae were soft, friable, whitish and irregularly-shaped without blood supply. So far, the endoscopic features of RPN have not been reported. The report revealed the imaging, clinical and endoscopic characteristics of PRN, which would help the clinicians distinguish RPN from the upper urinary tract-occupying lesions. In addition, the necrotic and sloughed renal papillae could be removed by flexible ureteroscopy so as to prevent further obstruction.