Thrombotic thrombocytopenia purpura (TTP) was first described in 1924 as a “pathologic alteration of the microvasculature, with detachment or swelling of the endothelium, amorphous material in the sub-endothelial space, and luminal platelet aggregation leading to compromise of the microcirculation”. Ticlopidine induced TTP has been highly associated with autoimmune induced reduction in ADAMTS-13 activity. These findings, to a lesser extent, have also been found in clopidogrel induced TTP. We report a case of clopidogrel associated TTP in a patient that presented with acute stroke, renal failure, and non-ST elevation myocardial infarction.

Greater than 600 000 percutaneous coronary interventions (PCI) are performed each year in the United States. With each PCI, patients are usually placed on more than one antiplatelet regimen because of its proven benefit. The very first agent available was aspirin, which inhibited thromboxane A2, an agent that causes platelet aggregation, thus reducing cardiac events post PCI. Following aspirin, further studies examined two other drugs that were available at the time: dipyridamole and cilostazol, both of which inhibits phosphodiesterase differently to illicit the same inhibition of platelet aggregation. Dipyridamole was found to be more efficacious in reducing stroke, but not acute coronary syndrome and thus never made into guidelines. Cilostazol proved beneficial in acute coronary syndrome, but had more adverse side effects and thus, there are no clear guidelines to specify its use in PCI patients. More recently, P2Y12 receptors antagonist have entered the market with astonishing efficacy. P2Y12 receptors are a class of purinergic receptors that exert various affects, like platelet aggregation, when activated by nucleotides, specifically adenosine diphosphate. Ticlopidine was the first P2Y12 antagonist approved for use. Initially approved for the management of stroke, it was later found efficacious in acute coronary syndrome and became incorporated into the American Heart Association (AHA) and the American College of Cardiology guidelines. Unfortunately, due to its hematologic side effects, causing neutropenia and thrombotic thrombocytopenic purpura, the use of ticlopidine was taken out of the 2011 AHA guidelines[1]. Clopidogrel, like ticlopidine, is a thienopyridine derivative which works by inhibiting adenosine diphosphate induced platelet aggregation. Clopidogrel has for the most part replaced ticlopidine as the drug of choice for patients undergoing arterial stenting because the clopidogrel vs aspirin in patients at risk of ischaemic events trial helped show that there is less risk for neutropenia and thrombotic thrombocytopenia purpura (TTP) with the use of clopidogrel than ticlopidine[2]. However, with the rise in clopidogrel associated TTP in the recent years, more special consideration should be taken into account when selecting an antiplatelet therapy, especially now that we have other options of P2Y12 antagonist like prasugrel (Effient) and Ticagrelor (Brilinta), which have their own drawbacks like increased bleeding with low body weight, and dyspnea, ventricular pauses and increased serum uric acid, respectively[1,3].

A 67-year-old male with past medical history of hypertension, diabetes mellitus, coronary artery disease status post coronary artery bypass, ischemic heart failure with an ejection fraction of 25% with biventricular pacemaker presented to a local hospital with complaints of left sided weakness in both his upper and lower extremities that quickly progressed to bilateral lower extremity weakness with frequent falls. He was transferred to our intensive care unit with a platelet of 14 000, a creatinine of 7.8, and a diagnosis of acute stroke. His home medications included aspirin, plavix, lisinopril, spironolactone, atorvastatin, glargine and aspart insulin. His home antiplatelet therapy was held on arrival due to his thrombocytopenia and drop in hemoglobin of 7.9 from a baseline of 11. Cardiac markers were positive with a peak troponin of 25.0, a creatine kinase MB of 30 and an index of 4.6. A ventricular paced rhythm was observed on electrocardiographic. Patient had denied any recent illness, and no prior medical history of autoimmune disease, human immunodeficiency virus, or malignancies. However, he claims of being started on plavix 2 wk earlier for known coronary disease. Peripheral blood smear showed schistocytes, lactic dehydrogenase was found to be 1182 and haptoglobin was 2, thus suggesting microangiopathic hemolytic anemia. ADAMTS-13 was less than 5%, complement C3 was decreased slightly at 85 and C4 was normal at 16, thus supporting TTP. Further Coombs testing was not done. Prothrombin time was 11.2, partial thromboplastin time was 30 and fibrinogen was 397, which did not support disseminated intravascular coagulation. Patient was immediately started on IV methylprednisolone 40 mg iv on day one for TTP, and he subsequently received 4 d of plasmapheresis with dramatic improvement in his platelet count and hemoglobin (Figure 1). He never had chest pain or dyspnea and was always hemodynamically stable. As his cardiac enzymes normalized with the onset of TTP treatment, no further intervention was done. With no further residual weakness and normal labs, our patient was discharged home on PO prednisone. 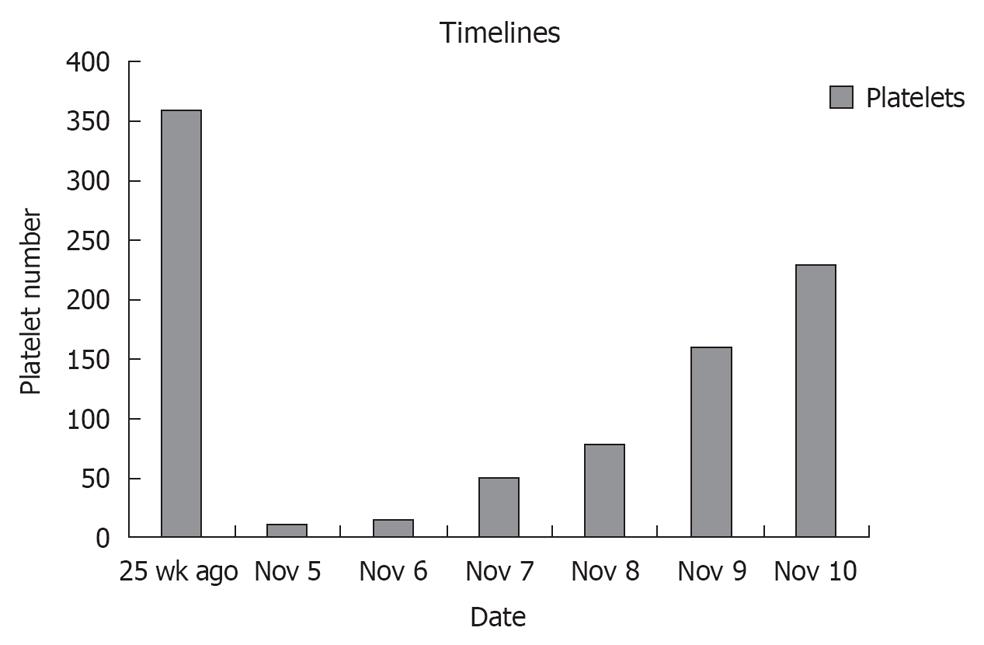 TTP was first described in 1924 (Moschcowitz syndrome) as a “pathologic alteration of the microvasculature, with detachment or swelling of the endothelium, amorphous material in the sub-endothelial space, and luminal platelet aggregation leading to compromise of the microcirculation”. There are two types: (1) Familial type (Upshaw-Schulman syndrome), which is rare, occurring in early childhood, and chronically relapsing but self-limiting; and (2) Sporadic or acquired type, which covers the majority of the cases[3]. Clopidogrel induced TTP occurs at a rate of about four per million patients taking the medication with a mortality rate of 10%-20%, and is 15 times more likely to occur within the first 2 wk of drug use[4,5]. Complications include severe thrombocytopenia, hemolytic anemia, fluctuating or focal neuro-deficits from central nervous system ischemia, renal failure and fever. Von Willebrand factor (vWF) plays a role in platelet-platelet and platelet-endothelial cell interactions. Large vWF multimers are the most potent in platelet clumping, and are constantly secreted from endothelial cells. ADAMTS-13 is a naturally occurring protease that acts to cleave these large vWF multimers, thus preventing uncontrolled platelet aggregation. Ticlopidine induced TTP has been highly associated with autoimmune induced reduction in ADAMTS-13 activity. These findings, to a lesser extent, have also been found in clopidogrel induced TTP. Our patient had severely low ADAMTS activity level of < 5% (normal is > 66%). Thus, treatment with steroids, and plasma exchange has been very effective[5-9]. Prompt recognition of this disease is important to survival. Therapeutic plasma exchange initiated within 3 d of TTP onset significantly increases survival. Delay in therapy will not only increase mortality, but also rate of relapse. Our patient responded appropriately after 4 cycles of plasma exchange.