Core tip: Arthroscopic surgery in posterior compartment of the knee via the transseptal portal is less invasive to the patient compared to open surgery for access to the back of the knee. However, special care should be taken to avoid neurovascular injury when creating the three posterior portals. We have not encountered neurovascular injury with our procedure for creating a posterior transseptal portal in 161 treated knees, and conclude that it is safe and reliable.

The triangular posterior septum borders the dorsal aspect of the PCL anteriorly, femoral intercondylar notch superiorly, and posterior capsule posteriorly and divides the posterior compartment into the posteromedial and posterolateral compartments[11,12] (Figure 1). The septum comprises adipose tissue surrounded by a synovial membrane that contains blood vessels and nerve endings[33]. The medial genicular artery, which originates from the popliteal artery, enters the proximal portion of the septum, which accordingly features a richer vasculature than the distal portion. Mechanoreceptors are also abundant in the proximal septum[33]. Therefore, recommendations regarding limited resection or penetration of the septum indicate that this procedure should be performed at the distal portion, just behind the PCL, rather than at the proximal or femoral side to reduce bleeding while creating the transseptal portal. Immediately behind the septum, the popliteal artery lies outside of the posterior capsule[34-36]. The popliteal artery lies approximately 10 mm laterally to the septum[15,37]. Regarding the posteromedial portal, a sartorial branch of the saphenous nerve is located immediately inferoposteriorly to the portal site (Figure 2A). The common peroneal nerve and long head of the biceps femoris are immediately posterior to the posterolateral portal site, whereas the lateral collateral ligament and popliteal tendon are immediately anterior to this site[36,38-41] (Figure 2B). 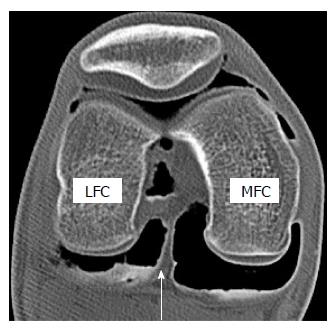 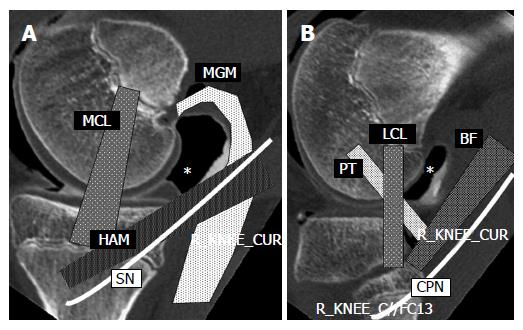 In 1997, Kim first introduced an arthroscopic approach to lesions located in posterior compartment of the knee via the transseptal portal. According to Kim’s technique, the posterior septum was perforated via the posteromedial portal using a blunt obturator with a sheath[10]. Ahn et al[11]. described a limited resection of the septum using a shaver introduced from the anteromedial portal through the intercondylar notch, which was viewed from the posteromedial portal. Louisia et al[12] penetrated the septum from the medial to lateral direction using a blunt obturator, which was followed by a skin incision to create a posterolateral portal. These authors demonstrated a “back and forth” technique in which each posterior portal is used alternately for the arthroscope and other instruments placed through the transseptal portal. Kim et al[15] penetrated the septum in the posterolateral to posteromedial direction to create a transseptal portal for complete synovectomy in a patient with rheumatoid arthritis.

Special care should be taken to avoid popliteal neurovascular injuries during transseptal portal creation and subsequent arthroscopic surgery via this portal. The posterior compartment, which is enlarged upon knee flexion, is enlarged to an even greater extent during arthroscopic surgery under irrigation pressure[34]. The distances between the PCL and popliteal artery at different knee positions were measured in cadavers[34,35,38,41]. A flexion of 90 degrees resulted a greater distance (17-29 mm) between the PCL and popliteal artery than that observed at 30 degrees of flexion. As the popliteal neurovascular bundle lies laterally to the septum, posterolateral capsule injuries should be avoided during surgery[12,37]. Perforation of the septum in the posterolateral to the posteromedial direction, as described by Kim et al[15], is a safer technique. Arthroscopic procedures in the posteromedial compartment are easier than those in the posterolateral compartment because the former is 1.5 times larger and bulges a bit more posteriorly under irrigation pressure during surgery relative to the latter[15,37] (Figure 1). Fortunately, popliteal vessel injuries during arthroscopic surgery via the transseptal portal have not yet been reported in the literature. 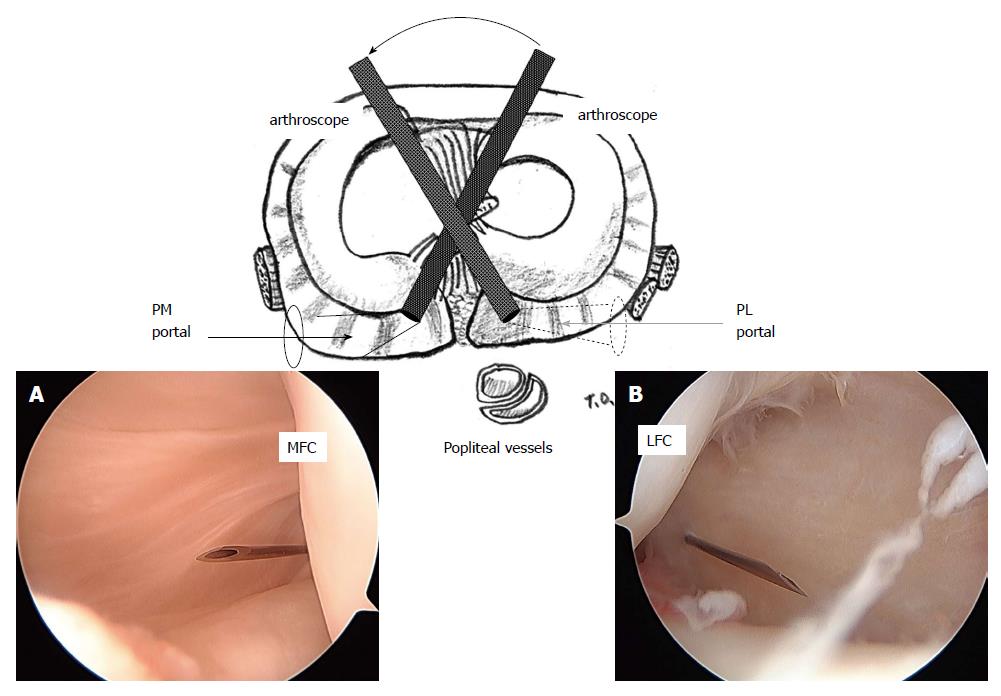 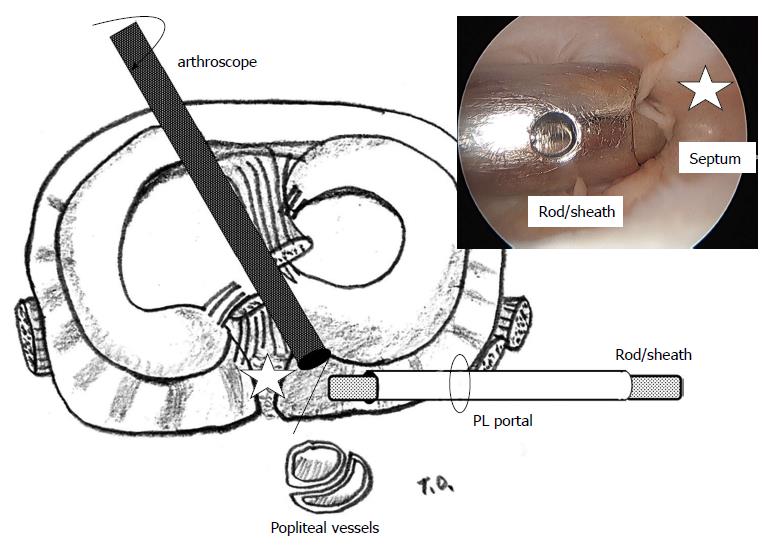 Figure 4 Rod with a sheath is inserted from the posterolateral portal. The camera head of the 30-degree arthroscope is turned toward the septum so that the operator can confirm attachment of the tip of the rod to the septum (white star). PL: Posterolateral. (Permission for reproduction was obtained from Nankodo Co., Ltd.). 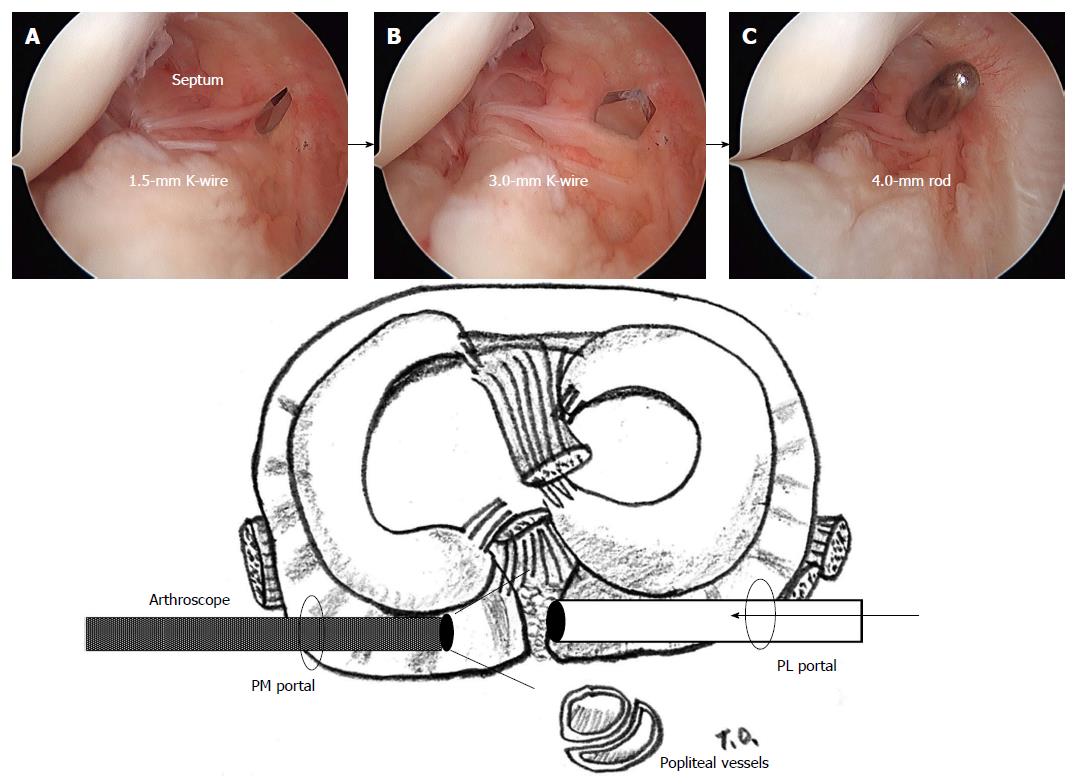 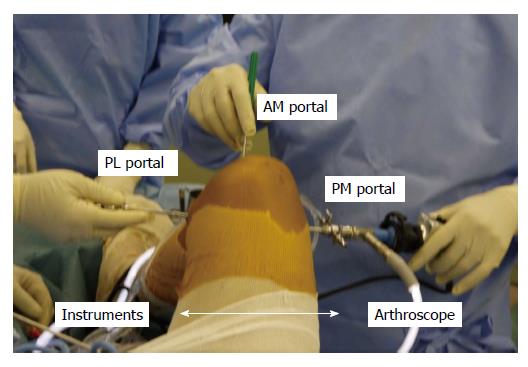 Using our procedure, we performed arthroscopic surgery for lesions in the posterior compartments of 161 knees between December 2006 and March 2015 (Figure 7). Some of these cases were reported elsewhere to demonstrate the use of the transseptal portal[42-47]. The arthroscopic procedures conducted using our established transseptal portal technique are listed in Table 1. Postoperative complications were encountered in four knees (2.5%), including superficial infection of the posteromedial portal in two knees, subcutaneous hematoma in one knee, and deep infection of the posterolateral portal in one knee. Treatment for the latter case required open debridement of the affected knee. No popliteal neurovascular, peroneal nerve, or saphenous nerve injuries or postoperative deep vein thromboses occurred in any knee during these operations. 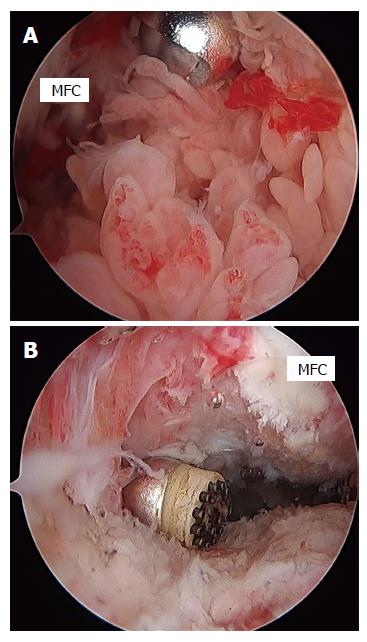 We have modified the procedures reported in previous papers[10-12,15] as follows. First, the knee is flexed beyond 90 degrees on the operating table, with a footrest placed at the heel, so that the popliteal vessels move posteriorly. Flexion beyond 90° is better achieved when the lower leg is not suspended from the side of the table. Moreover, the operator can work freely when the lower leg is on the operating table, as this provides more available space for working around the knee (Figure 6). Second, we perforated the septum while protecting the posterolateral capsule with a sheath to avoid popliteal vessel injury, as a popliteal neurovascular bundle is located just lateral to the septum (Figure 4). Finally, septum perforation using only a rod or blunt obturator might be difficult and could confer the risk of posterior rod or blunt obturator slippage, as the septum is very elastic and easily stretched. It is therefore safer to perforate the septum initially with a 1.5-mm Kirschner wire to determine the proper placement, followed by a 3.0 mm Kirschner wire to enlarge the hole and subsequent switching rod placement, rather than rod placement alone (Figure 5). However, the operator should ensure that the tip of the Kirschner wire is properly positioned just behind the PCL and is not directed towards the posterior capsule. It is essential that the operators use an arthroscope introduced through the opposite portal to maintain direct visibility of the tip of the Kirschner wire or the switching rod as it passes through the perforated septum.

An arthroscopic approach via a transseptal portal for posterior lesions of the knee confers several advantages upon patients and operators, including less invasive technique compared to the open surgery for access to the back of the knee. However, the risk of neurovascular injuries should be considered. It is important for operators to understand the anatomy around the posterior three portals.